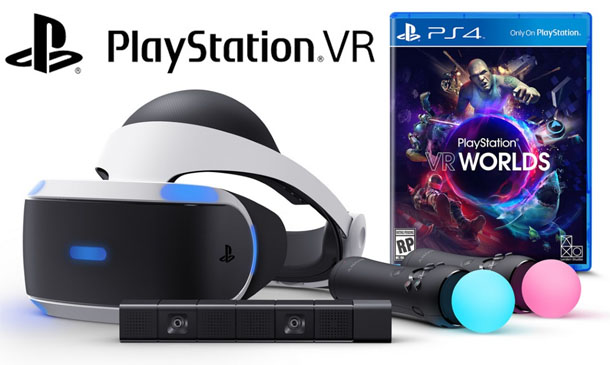 A definitive step forward in the evolution of entertainment.

Welcome to our third and final VR review for 2016. After previously covering the Oculus Rift and the HTC Vive we finally come to the first of what can arguably be considered, a mass-produced consumer grade VR experience; the Sony PlayStation VR. Sony may be six months late to the party, but they have arrived just in time for the holiday shopping season and delivered what is easily one of the most enjoyable VR experiences of the trio.

As much as I love my Vive and Oculus I have to admit they have been gathering a thin layer of dust these past few months. Neither system has seen any major titles to speak of, and Steam is becoming the dumping ground for hundreds of demos and indie projects that are more “experimentations” than actual games. But Sony is about to jumpstart the whole VR conversation again with their latest add-on for the PlayStation 4.

While technically inferior on paper when it comes down to raw stats and specs, the PlayStation VR vaults effortlessly over and ahead of its PC cousins when it comes to consumer friendliness, comfort, and game selection, despite many of its launch titles having already established their virtual roots on the PC.   PSVR makes a great first impression with its somewhat accessible price point of $399 for the basic kit and $499 for the bundle – the one you’ll actually want to buy. Admittedly, we’re talking about a peripheral that costs more than the system that runs it, but we are also well below the price of either of the VR options for PC, and PSVR doesn’t require an expensive PC to run it.

Setting up the PSVR is fairly straightforward in theory, falling somewhere between the Vive and Rift in annoying procedures. Unpacking the bundle box revealed two smaller boxes; one with the actual PSVR and the other with all of the bonus bundle goodies like the new tubular PlayStation Camera and a pair of PlayStation Move controllers – remember those guys from the PS3 days? They’re back… 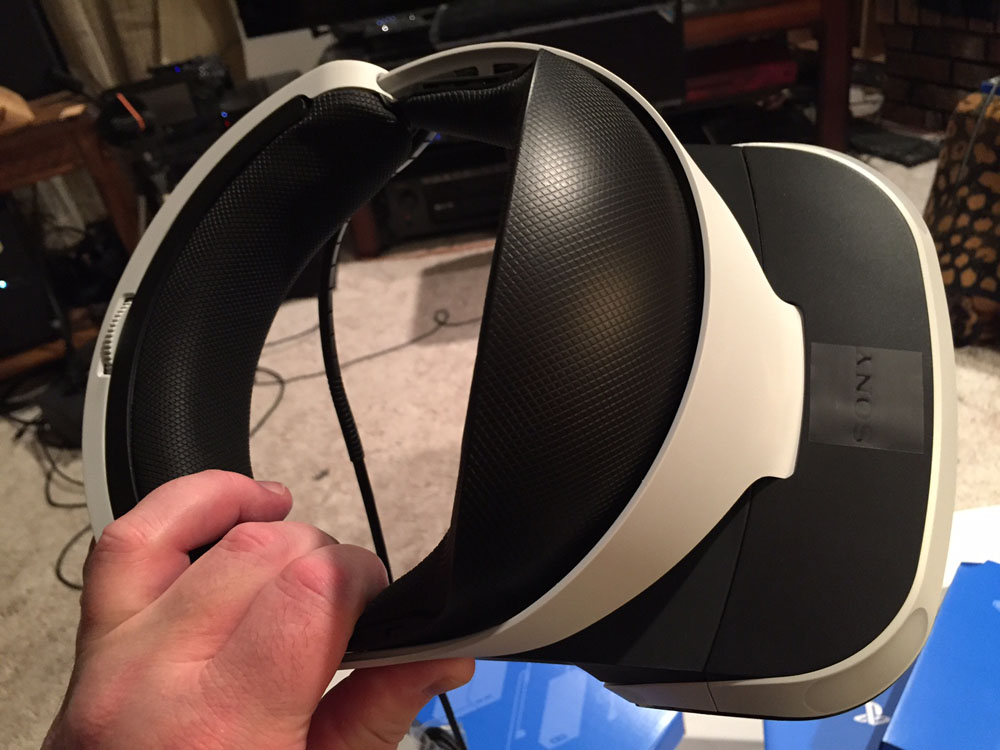 Inside these smaller boxes are even smaller boxes with more goodies inside; mostly cables and a modest little processing unit that generates 3D sound for the VR headset and also passes the video signal out to the TV for spectators and multiplayer games…yes I said “multiplayer games”.  This pass-through box is one of a few major complaints I have with the PSVR for the simple reason that is strips away the HDR part of your video signal. If you don’t know what HDR is then it won’t be an issue, but for those who enjoy premium video quality; especially what is coming in the PlayStation 4 Pro in a few weeks; this is an annoying development that will have you removing the pass-through box from your PlayStation 4 installation anytime you want to enjoy HDR content. Anyone for a game of switchboard?

Connecting all the parts is fairly straightforward assuming you have easy access to the back of your PS4. The processor box hooks into the PS4 with a USB cable and an HDMI cable and also requires an AC power outlet.   A lengthy multimedia cable then plugs into the front of that box and stretches out to wherever you will be playing and the headset plugs into that.   The actual headset is easily the coolest looking of all three major VR headsets on the market with its stylish white and black Daft Punk design that is all about function and comfort. With everything connected all that’s left is to turn on the power and do one final software update. 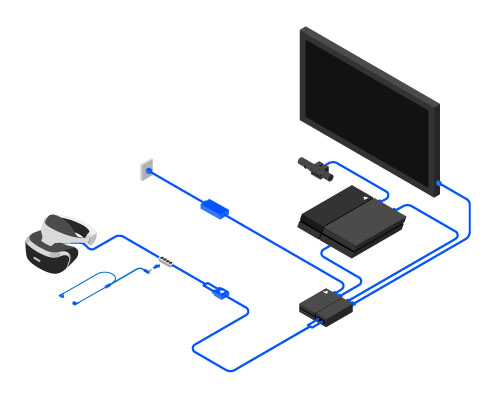 The first thing I noticed about the PSVR was just how comfortable it was. I wear glasses (bifocals actually – even worse for VR) so I have been in a constant state of struggle with both the Rift and Vive for the past six months trying to maintain some level of comfort and functionality – usually moving my glasses low and keeping the headset high on my face, but the PSVR was intuitively easy and effortlessly flawless in not only fitting my face but presenting a crystal clear image with relatively no fuss. A button on the back of the headset allows you to stretch the headband open and a wheel on the back lets you crank it down as tight as you need. A button on the underside of the front of the headset allows you to freely telescope the eyepiece away from your face if you need to look around the room to find your controller or answer your phone.

The cord running off the headset is rather short; meant to connect to the longer multimedia cable via the breakaway connector, which reduces tripping hazards. An inline control box toggles power to the headset as well as controls the volume to any earbuds or headsets you choose to plug into the standard audio jack. While you can still enjoy up to 7.1 surround sound on your existing home theater, the only way to get authentically processed 3D sound relational to what you are seeing is through the headphone jack of the PSVR headset.

PlayStation VR doesn’t throw you into some magical VR world or crazy interface the moment your turn it on. It’s business as usual with a virtual giant screen version of what your TV is showing, allowing you familiar access to your PlayStation content using the standard menus. I immediately downloaded The Playroom VR app and proceeded to lose the next two hours of my life. 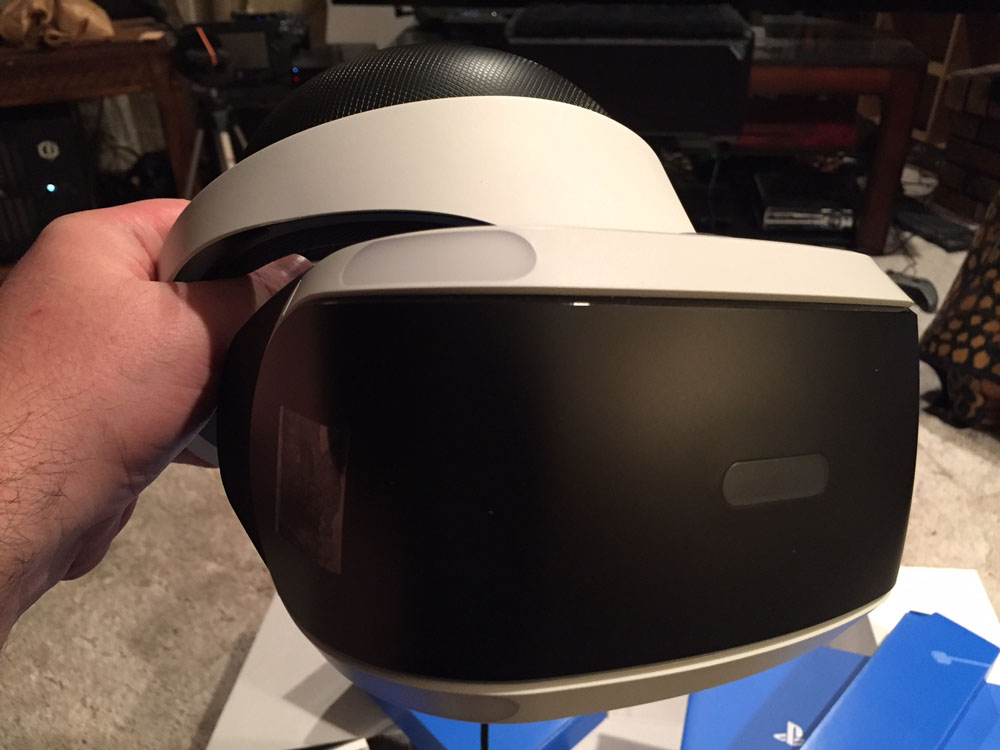 With over a dozen games standing by for first impressions and eventual reviews I was totally captivated by the content found in The Playroom VR; a free download that I encourage every PSVR owner to download and play immediately; especially if you have friends over, because these games offered some of the best party-style, game-night experiences I’ve had since Sports Champions on the PS3. These are the same style mini-games you might remember from the original Playroom that came with the PlayStation Camera – you remember those crazy little flying robots. Well, they are back and in a big way as you play inspired VR versions that will have you ghost busting, monster rampaging, shooting villains in the Wild West, rescuing robots in a Mario style 3D world, and even trying to collect some cheese while avoiding an evil feline. The fun factor is off the charts, and all but one game actually requires multiple players. Instructions will tell you how those others will interact. Sometimes they will take the controller while you interact with your head, and other times players will have to shout out instructions based on things they are seeing on the TV that you can’t see in your virtual view. I guarantee, this will be your go to game whenever family and friends want to check out your new VR setup.

After two hours of multiplayer mini-games it was time to dive into the demo content that comes with the PlayStation VR. In a brilliant stroke of marketing genius Sony has included playable demos for several of their launch titles. As somebody who has tried to convey the magic of VR in over 40 VR game reviews I can attest to the fact that the only way to truly appreciate VR is to play VR, so these demos are a fantastic way to not only get familiar with how VR works, but find out what kinds of games work for you. And if you find something you like every game has a convenient BUY IT NOW button somewhere in the presentation. I won’t go into great detail on individual titles since we will be covering those in upcoming reviews, but some highlights of my trip through this collection were EVE: Valkyrie, a stunning space shooter that puts you in the cockpit of a spaceship and literally launches you into action, Driveclub VR that puts you behind the wheel of three cars and lets you race or compete against the clock, Battlezone, a futuristic tank shooter based on Atari’s wireframe classic from the 80’s, and Until Dawn: Rush of Blood, a literal rollercoaster of terror. 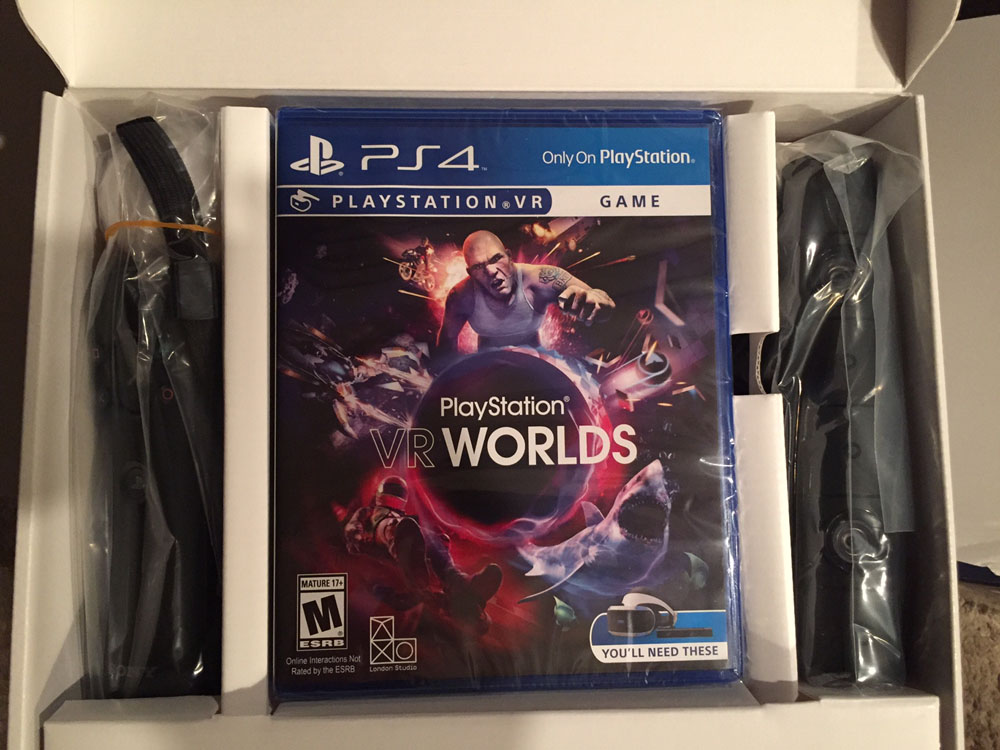 For those who purchase the $499 PSVR bundle you’ll also get PlayStation VR Worlds; a collection of five more demos including; The London Heist, a gritty crime adventures, Scavenger’s Odyssey, a gorgeous space exploration game, Ocean Descent that takes you to dangerous shark infested depths, VR Luge that catapults you down traffic-filled roads at insane speeds, and Danger Ball, a 3D version of Pong in a box.

So, just out of the box standard users have nine games to explore and bundled owners have fourteen, and there are plenty of free demos, apps, and cute VR movies like Invasion that can be downloaded from the PS store, and don’t forget about The Playroom VR. With over 50 games planned for the PSVR by the end of 2016, you won’t be short on things to do in virtual reality.

PLAYSTATION VR VS “THE REST”

The PlayStation VR has several things going for it; superior design, a great and growing game catalog, ease of use, an established user base, and the backing of a company with a focus on gaming.   The Vive and Rift were made by hardware people, and you are at the mercy of third-parties for the quality and quantity of the content. Sony is bringing you amazing first-party titles and collaborating with all the major players in VR game development to bring you the largest library of quality VR titles of all the available platforms.

I have to admit I was a bit skeptical going into this review. I was sure that this underpowered VR kit could never compete with the “big boys”, but after some serious virtual game time, including playing several games I have already played on those other systems that look just as good if not better, the Sony PlayStation VR is here to stay. VR may or may not be the future of gaming, but it’s a fantastic way to explore new worlds and new gaming possibilities and a definitive step forward in the evolution of entertainment.