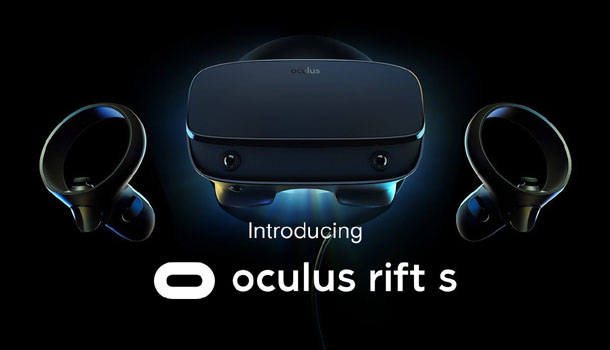 One giant leap for newcomers...one small step for existing owners.

Oculus is back after only three years since their last offering, the Oculus Rift, to ask that timeless question…”How rich are you?” Their new Oculus Rift S is by no means a second generation offering but rather a mid-gen refresh, much like the Xbox One X and the PS4 Pro. Knowing that going in will certainly help guide existing Rift owners in making their purchase decision, but for those still sitting on the fence or those entirely new to VR, this review is for you.

If price is an issue then those who have been patiently waiting these past three years will certainly enjoy the $400 entry fee versus the combined $800 I paid in 2016 for a Rift and Touch sold separately at the time. Pioneers definitely pay the price, but I wouldn’t trade the experiences I’ve had these last three years for any amount. I’ve been dabbling with VR tech since the early 90’s, so there is a certain expectation of frivolous spending if you want to be on the cutting edge of new or experimental technology. 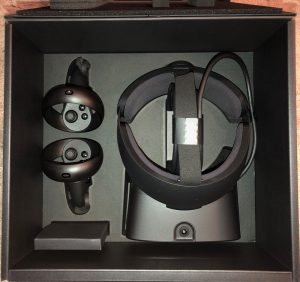 The first thing I noticed about the Oculus Rift S was the compact packaging with both the headset and the Touch controllers strategically placed in a box smaller than the original Rift package. This is mostly in part to the new Rift S not coming with tracking sensors or the Xbox controller. Less stuff in the box means less stuff to plug in, and the new Rift S now connects to your PC with only a DisplayPort video and a USB-A plug splitting off the end of a 15-foot cord. New VR owners need only download the setup program from Oculus while existing Rift owners with the software already installed will get a pop-up detecting when the new headset is plugged in and perform the necessary firmware updates.   The entire setup takes less than ten minutes based on your internet speed. While that is going on you can insert the included AA batteries into the Touch controllers so those are ready to go.

There are a few more configuration steps to finalize before you are ready to jump into a game. You’ll need to designate a safe play area, and performing this task introduces you to one of cool new features of the Rift S; the pass-through camera. Unlike the original Rift that used up to three external sensors to track the headset and motion controllers, the new Rift S has five cameras mounted to the headset, which offers the same level of tracking as a 3-sensor setup without all the connection issues. SteamVR will even show the Rift S as a 3-sensor configuration. These same cameras are able to display a real-time feed of your play space by stitching together five images into a crude but functional B/W image. This view can easily be switched on if you need to check your surroundings, get a drink, check your phone, etc. without removing the headset. At this point of the setup process you will be using one of your Touch controllers as a “laser pointer” to trace the outline of a clear playable space which will in turn create the Guardian boundary so you don’t bump into furniture or knock over a lamp when things get crazy.  This new boundary is pretty cool because if you break the virtual wall the cameras will allow your real surroundings to spill into the VR world like peeking through a curtain. 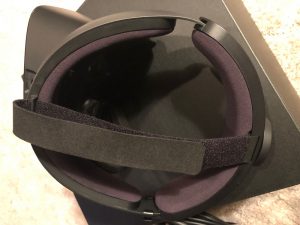 The two big obstacles VR headsets need to overcome are comfort and performance. Let’s start with comfort, as the new Rift S has a major redesign to the way this fits on your head. The original Rift had rubber straps with Velcro adjustments and an elastic piece that made the unit easy to slip on an off, but not very convenient if you wanted to swap the headset around a group of friends. It was always like having somebody else driving your car and adjusting the seat and mirrors, then you get back in and have to set it all back up for you. Lenovo is responsible for the new halo mount, which owners of the PSVR may find very familiar. A large circular knob on the back of the unit twists to open up the ring so you can slip the headset on and then tighten it back up with the same knob. There is still a Velcro strap across the top but this seems to need far less adjustment than the original Rift. You will definitely want this strap to be snug to support the added weight (1.2 pounds) of the Rift S and keep it from riding your nose.

There are a few interesting changes to the eye box design. You can now adjust the box away from your face making this much better for gamers with glasses. I wear bifocals and was constantly struggling with the old Rift so it was positioned properly, but the new Rift S just works every time. The new Rift S lacks the slider to manually adjust the IPD (a side effect of a single screen vs. two lenses), and while there is a digital adjustment within the settings, anyone with pupil distances far from the 63.5mm default might have some blurriness. 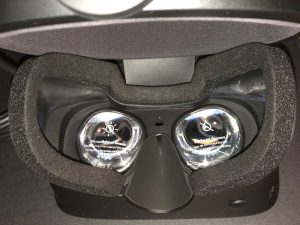 Checking the specs we find the new LED display offers a 1280×1440 (per eye) display; a noticeable upgrade over the original 1200×1080 resolution.   The new LED display doesn’t get quite as dark as the original OLED display, so some blacks might not be as dark, and colors might not be as vibrant, but the added resolution and increased sub-pixels all but eliminate that annoying screen-door haze from the original Rift. Everything is much clearer and text is crisp and easier to read. The new lens design also greatly reduces that annoying reflection and god ray effect that was prominent on the original Rift.  The only minor caveat to the new display is that the refresh rate has dropped from 90Hz to 80Hz but honestly, I couldn’t tell the difference. 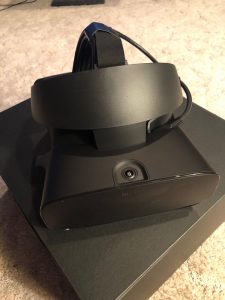 Another significant improvement for the Oculus Rift S is the tracking. What used to require two sensors for forward-facing VR or three sensors for room-scale is now all self-contained in what is called “inside-out tracking”. The five cameras on the headset now track your head, body, and hands based on your position in the predefined play space as well as your hand positions in relation to your headset. This means the tracking system is always moving with you, so if you spin around you are never losing contact with a sensor. There is also new technology in place, so that if the Touch ever does lose tracking the system will interpolate motion based on what it thinks you were doing.

The Touch controllers have been redesigned, and while I was sure having the tracking rings on top would be super-annoying I have to admit it didn’t bother me at all. What I did enjoy was the repositioning of the menu buttons. On the original Touch I was always accidentally hitting those buttons – usually in a frantic firefight while trying to reload or even just shifting my grip during an energetic round of Beat Saber. These buttons are now low and center, far from any other buttons or the natural resting position of my thumb. The overall tracking for the Touch as well as the entire Rift S ensemble is fantastic and best put to the test with a few hours of SUPERHOT VR or Lone Echo. 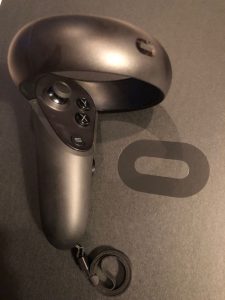 Perhaps the biggest setback to the Rift S is the weak implementation of audio. Admittedly, the original Rift didn’t have amazing speakers, but at least they came down over your ears and offered adequate immersion and some reasonably good frequency response.   The new halo headband now has built-in ported audio near your ears – it’s the equivalent of having earbuds hanging from your lobes but not actually in your ear. Everything is weak and slightly tinny and there is absolutely no bass. Games like Valkyrie Warzone, where you must use positional audio to find secret stashes in space, are impossible to play using the built-in speakers.   Thankfully there is a 3.5mm jack, so you can plug in your own headset or earbuds. Personally, I don’t like anything in my ears and finding a headset that comfortably fits over the Rift S halo ring has been impossible so far.

The Oculus Rift S makes use of the same store as the original Rift and your existing library will be instantly available along with future Rift titles. Existing Rift owners will likely find themselves replaying a lot of their old games just to see how much better they look on the Rift S, and they do look better. The Rift S is all about ease of use, from the near-instantaneous installation to the simplification of putting the headset on and quickly dialing in that comfortable fit. Ironically, the extended 15-foot cable was a major selling point for me, as I can now play VR in my home theater recliner, which greatly adds to the immersion in certain space and driving games with a cockpit. The sliding eye box is also a huge improvement and I can now get the headset to finally work with my bifocals without smashing them into my face. 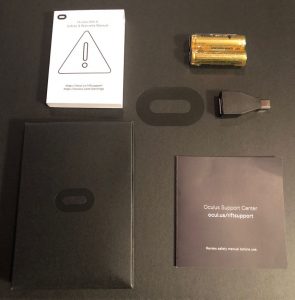 But there are issues as well, such as the lack of a physical IPD setting, poor audio implementation, and the simple fact that the Oculus Rift S just isn’t that much of a significant upgrade over the original when you start to break it down. I was also slightly annoyed that the Rift S doesn’t turn off or go to sleep when you shut down the Oculus app. The headset light is always on until the computer is turned off or goes to sleep.  Another potential obstacle for laptop gamers is the Rift S now uses a DisplayPort plug.  There is a mini-DisplayPort adapter included, which may help.

The Oculus Rift S is a fantastic VR headset, perfect for ushering in a whole new generation of VR gamers with its quality experiences and reasonably affordable price. While it might not be the product existing Rift owners were hoping for, those who want to stay current or those seeking more comfort, cleaner visuals, and easier setup with less room clutter will definitely want to make this mid-generational leap.