An amazing taste of the future if you have the funds and the hardware to enjoy it. 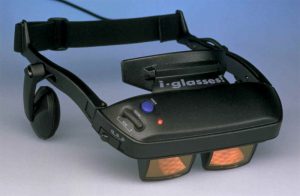 Welcome to the world of VR…again. This isn’t the first time VR has tried to establish a foothold in the gaming community, but now might be the right time.  I got my virtual feet wet back in the 90’s with a pair of Virtual IO I-Glasses.  This was back in the day of Diamond3D cards and 3DFX daughter cards.  Here was this nifty pair of glasses that would turn nearly ALL of my regular 2D games into 3D and give me limited head-tracking capabilities.   In some games like Quake, Doom, and Jedi Knight (basically anything built using that engine) the results were impressive, while games like Descent that let you steer and fire your guns by merely looking in a direction were jaw-dropping.

Now, 20 years later, virtual reality is coming back big, with no less than three major pieces of hardware releasing this year in an attempt to put gamers in the game like never before.   Already out for PC are the Oculus Rift and the HTC Vive, and Sony has their PlayStation VR headset poised to change the way we play consoles games later this year.

Today’s first-look impressions are going to be focused on the Oculus Rift, the more affordable and frankly, more user-friendly of the two PC VR solutions available. The HTC Vive may offer more interactivity with its hand controllers and full body tracking, but it also requires a more advanced setup and potentially dedicated game space.  The Oculus Rift comes in $200 cheaper than the Vive and requires a much less complicated setup.  While it lacks hand controllers (those are coming soon) it does ship with an Xbox One gamepad and a wireless USB receiver.  The Oculus Rift is also better suited for seated gaming experiences, although there are some titles that will ask you to stand for better engagement. 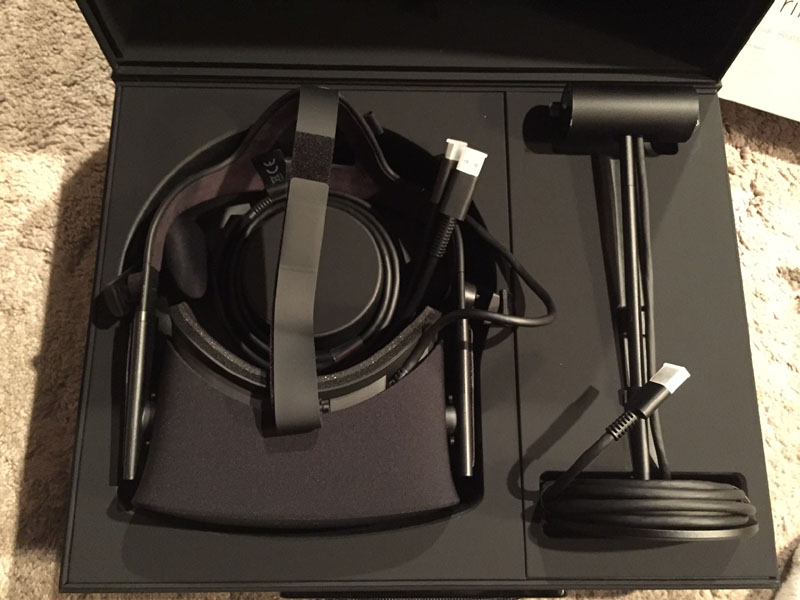 Out of the box the Oculus Rift is fairly impressive from its slick packaging to its intuitive step-by-step setup. No crazy manuals or wiring diagrams here…just go to the web address, download the setup app and start following the prompts.  Honestly, it was probably the best installation experience of any piece of electronics hardware in my 35 years of playing with technology.  My only hiccup was not realizing my GTX980ti card only had one HDMI port, delaying my installation until the next day when I could go purchase a DisplayPort to HDMI adapter so I could run the Oculus Rift and my TV at the same time.

The setup procedure walks you through connecting the headset sensor (thing that looks like a microphone stand), the headset, and the Xbox controller. When you get to a certain point you are prompted to put on the headset to continue the installation and that is the magic moment when you are transported from Kansas to Oz.   There is a calibration slider to adjust the width of the lenses that will help focus the image and top and side Velcro straps can be adjusted to hopefully find a comfortable fit. 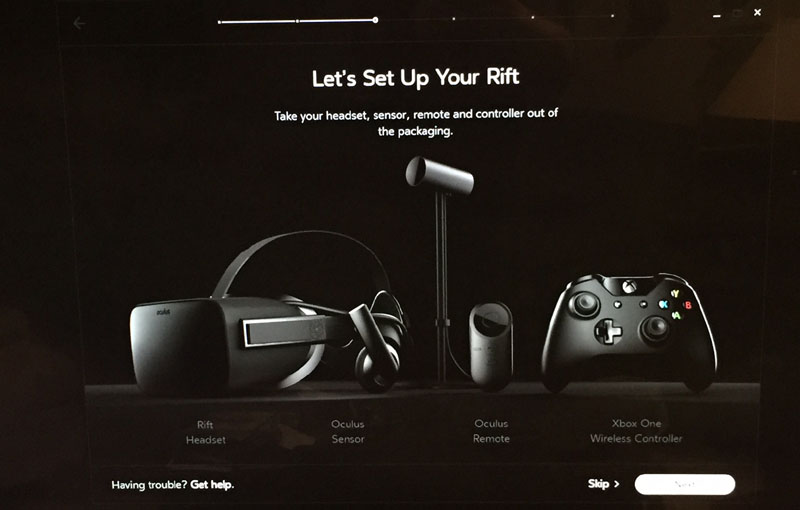 I say “hopefully” because I wear glasses and it took me about three days to finally figure out how to keep this headset on for more than ten minutes without my glasses digging into my nose.   Pro tip:  Pull the top Velcro strap extra tight to lift the goggles so they don’t push down on your nose.  Those with glasses may find they have to first insert their glasses into the goggles then carefully put both on at the same time – a skill I have quickly honed over the past week.  No matter how tight the straps there is always a small gap around your nose, so there is a potential of light bleed unless your room is dark, but you really have to be looking to see it.  Actually, I appreciated this thin connection to the real world in case I needed to locate the controller or check my position in the room – not that you move around that much.

Nothing can really prepare you for the experience you are about to have once everything is ready to go.   The main menu for the Oculus Rift also serves as the gateway to your existing library of games and apps as well as personal profile data, friends list, and the online store where you can preview, purchase and launch games without ever having to remove the headset, all from the comfort of your real couch or favorite chair, but magically transported to a virtual apartment with fireplace and full 360-degree panoramic view. 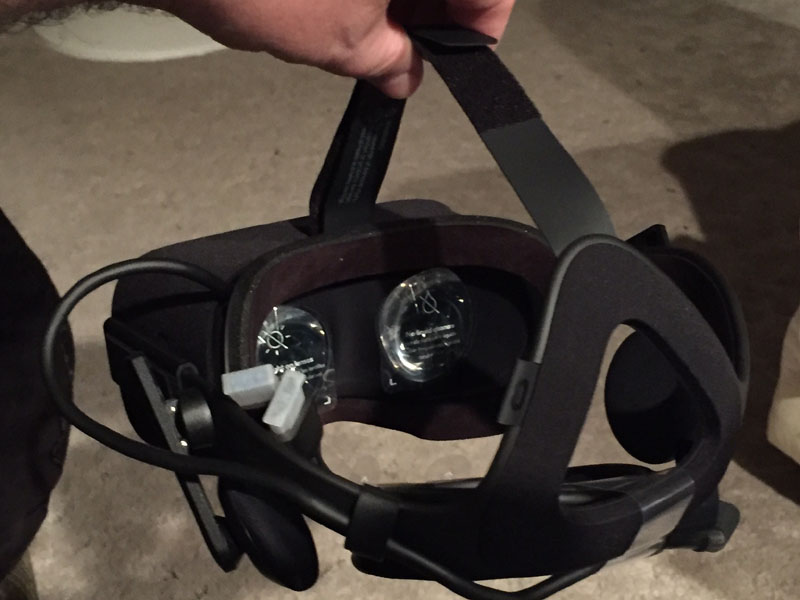 Perhaps the worst thing about the Oculus Rift is the inability to express just how amazingly cool it really is. I kind of feel like Jodie Foster in the movie Contact.  Until you actually try it for yourself it’s impossible to express the level of immersion you feel, which makes it challenging to review the hardware or any of the 20+ games I have loaded up.  Screenshots and videos do nothing to communicate the feeling of complete personal integration into the game.  Thankfully, those who purchase an Oculus Rift will find plenty of freebies to help get them acclimated to this new world including video and photo viewers, some delightful VR short films, and a totally charming and addictive game called Lucky’s Tale that will impact gamers with the same severity as Mario did the first time he appeared in his first 3D game.  Another title, Dream Deck, is a collection of short demos and experiences that only hint at the potential of this amazing device.

There is a surprising amount of content already available for the Oculus Rift, both on the Oculus store as well as on Steam. Some titles are actually available on both platforms, but sadly, games purchased on Steam won’t carry over to the Oculus library, making it a bit more cumbersome when you have to launch a game from your monitor/TV then slip on the goggles.   At this point there is no way to organize your Oculus library other than sorting A-Z or listing by comfort level.  I hope they add some category filters before my library becomes too unmanageable.

Speaking of comfort levels, games and apps are rated for comfort or level of intensity, but this doesn’t always translate into the potential for motion sickness. Ironically, some of the more physically relaxing games have a greater potential for nausea.   Seemingly innocent walking-around games like The Vanishing of Ethan Carter and Albino Lullaby have a certain disconnect between your brain and body that could cause VR sickness, and if you feel this coming on in the slightest I encourage you to stop playing.  Full-on motion sickness can take several hours to shake off.  Conversely, intense racing games like Radial-G or Project Cars are fairly innocuous to your inner ear.  Basically any game that presents a seated experience like EVE Valkyrie or EVE Gunjack or games with a gods-eye view like Marble Mountain or Lucky’s Tale are surprisingly comfortable despite the intensity of the actual experience.   The one exception to these findings would be The Climb, an immersive rock-climbing simulation where, if you fall, will have you possibly losing your balance and grabbing out to catch yourself – at least it did me.

There are other niche experiences that are a real treat like creating an IMAX-sized theater complete with empty stadium seating and watching a video – just don’t try to use the cup holder…it’s not really there. There is a great selection of video content already available including sporting events, travel and nature documentaries, and one of my favorites; riding along with the Blue Angels.  Thankfully I didn’t feel those 5G loops, but seeing them from the backseat was more than enough.  And keep in mind; you are free to look around in full 360-degrees while watching these videos. 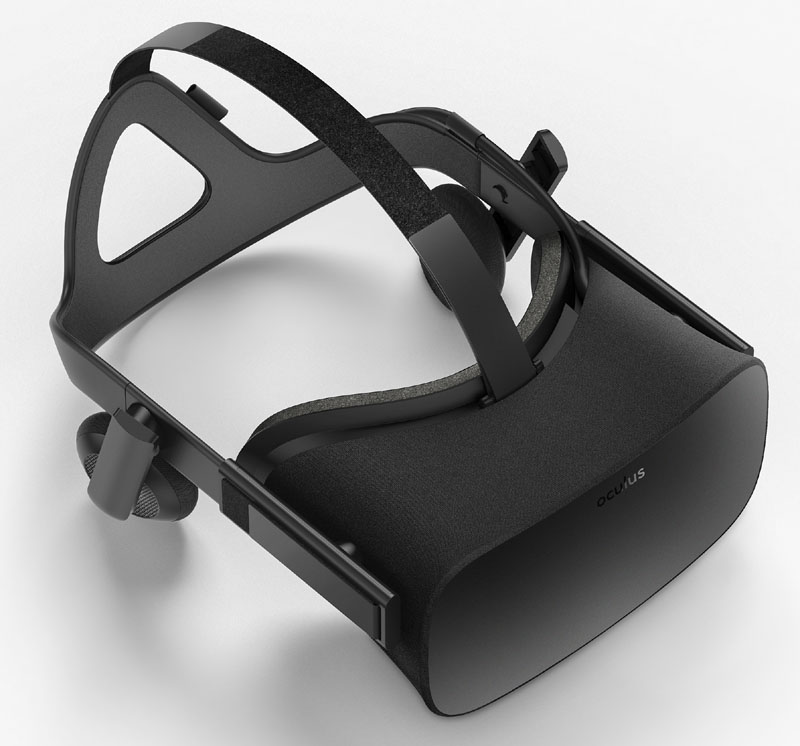 After playing/experiencing nearly 30 titles over the past week if I had to pick a favorite it would be tough. EVE Valkyrie is easily the most complete and totally immersive game from a traditional standpoint with a captivating interface that puts Minority Report to shame.  From a pure sense of wonderment there is a demo for a game called Mythos of the World Axis that created this impossibly detailed model right before my eyes and allowed me to control this little cloaked figure as he ran around trying to unshackle ME, who was chained to the game world.  I was able to move around and get down close enough to inspect this 3D world that looked like somebody had constructed a real 3D miniature set out of real wood and stone.  Even during the opening moments as the main character is being lowered down on a rickety lift, he appears right in front of you face like a spider descending on a strand of webbing and you swear you could pluck him from the world and hold him in your hand.  If you get an Oculus Rift I encourage you to pick up this free demo.

Audio plays a huge part of the immersion in most of the experience on the Oculus Rift, and I was impressed at just how good the sound was coming from the built-in speakers on the headset. In a game like EVE Valkyrie where you are searching for hidden salvage and using positional audio for clues, it is imperative for quality sound and Oculus delivers, but if you want, you can flip the earpieces aside and use your own headset. 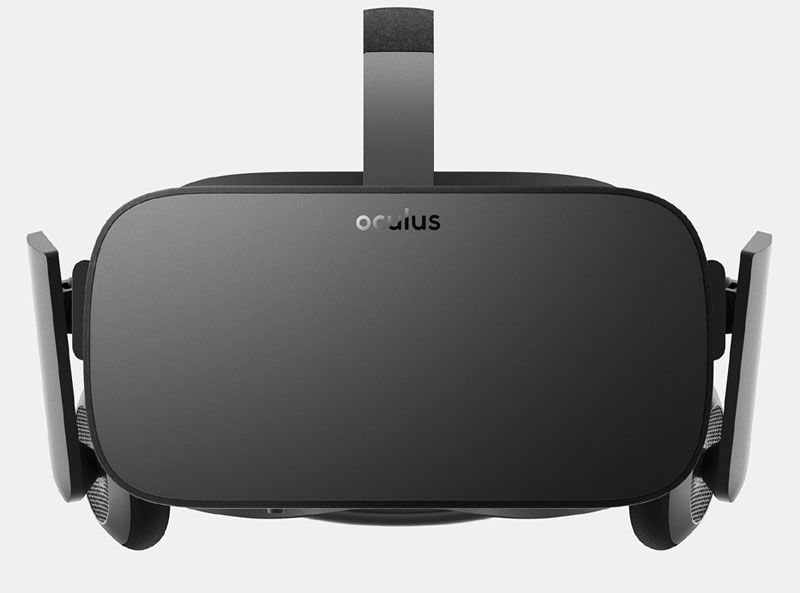 The only real downside to the Oculus Rift at this point is the price of admission. $600 is admittedly a bit costly for what is arguably a niche piece of hardware; especially when you factor in the beast of a computer you are going to need to run one.  All said and done, you are looking at around $2000 if you want to join this first generation of VR.  I suppose the initial lack of hand controllers is also a factor; especially if you hear from anyone who has played with the Vive and talks about how cool it is to physically interact in VR, but the Oculus Touch is around the corner, so the playing field will be level soon. 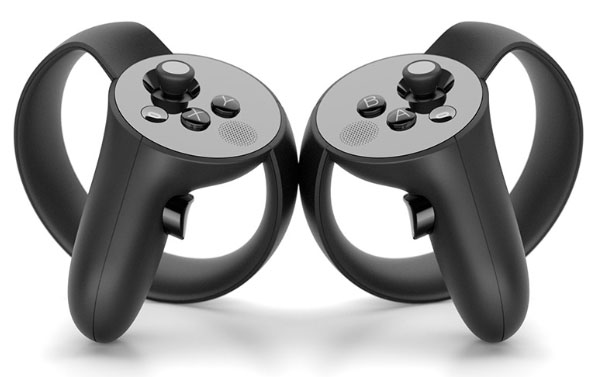 Another potential downside is that while VR gaming is great for the person wearing the headset it’s not terribly exciting for anyone else in the room, unless watching the player’s reactions to their experience holds any entertainment value for more than ten minutes.  While the VR gamer is transported to a new world you are left watching the 2D monitor which may be showing split-view windows of a 3D game, a 2D view of whatever the player is looking at in their world, or in some cases, nothing at all.  VR gaming is very much a solo experience.

I’m still not sure VR is ready for the home. I can easily see VR arcades springing up, as this is amazing interactive entertainment that everyone should experience, but not everyone is going to dedicate the funds and the space to play at home.  But for those who want to live their games rather than play them, for those who want to star in a movie rather than watch one, and for those ready to leave this reality and explore virtual ones, the Oculus Rift is an amazing device.   From the moment I opened the box to the moment I’m wrapping up this review, I was never once disappointed and continue to be impressed more and more with each new title I explore.