No longer requires AC power, all the power of the S.T.R.I.K.E. 7 at two-thirds the price

E.Y.E. module buttons are harder to press than the touchscreen on the previous model, glossy wrist rest

Mad Catz S.T.R.I.K.E. 5 Gaming Keyboard might just be the best solution for gamers looking for the most tech at an affordable price.

A few months ago we reviewed the Mad Catz S.T.R.I.K.E. 7 Gaming Keyboard, a high-end programmable keyboard that offered the ultimate set of “bells and whistles” including a full-color, touch-screen interface.   Apparently the $300 price tag was a bit daunting, even for the most die-hard of macro users, so Mad Catz quickly followed up with the Mad Catz S.T.R.I.K.E. 5 Gaming Keyboard, coming in at only $199.  This toned-down version offers most of the same features while replacing the cool VENOM touch screen with a more utilitarian interface that offers the same functionality without the WOW factor.

Out of the box you get pretty much the same experience as the S.T.R.I.K.E. 7; 16 million color options for your keyboard lighting (both keys and backlighting), strong durable construction for all the components as well as the way they attach to each other and non-bundled intuitive configuration and setup software that you must download from their website prior to use.  Your first task will be to assemble the various components including the keyboard, number pad, and three wrists supports, one of which includes a roller wheel and button.  Splitting up the keyboard into all these parts may seem excessive but it does allow the ultimate in configuration for lefties and righties or those who prefer to have their keyboard and number pad in separate locations or at odd angles.   Regardless of your configuration, expect the S.T.R.I.K.E. 5 to take up much more desk real-estate than your previous keyboard.

The big feature of the S.T.R.I.K.E. 5 is the E.Y.E. module that gets you access to all the advanced programmable features of the keyboard that are handled with an intuitive graphical interface that vastly simplifies the formerly tedious task of macro programming.  Each of the keyboard’s three different modes can store your programmed macros, tripling mid-game access to available commands, and once programmed, custom profiles can be published to share with your community.   The E.Y.E. module consists of a circular OLED screen with a rotatable selector ring and four primary function buttons to the right and nine more command buttons to the right of those.  There is even a headphone and mic jack for convenient plug and play if you are using a non-USB chat device.  My only concerns with the new E.Y.E. module is that you have to press significantly harder on the buttons than you did on the V.E.N.O.M touchscreen, which often had my keyboard slipping back on my desk.  Also, the selector ring around the OLED was also not 100% responsive every time I tried to use it, and this ring is critical in most all of the functions of the keyboard. 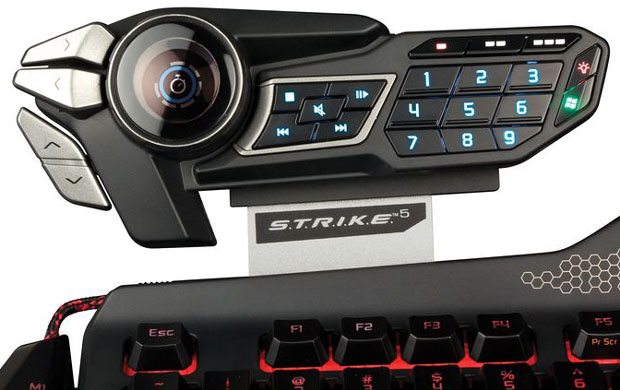 You might be expecting a mechanical keyboard considering the S.T.R.I.K.E. 5 is priced in the same range, and while the S.T.R.I.K.E. 5 does feel and respond with nearly the same tactile feedback and accuracy as those fancy mechanical keyboards, it does so by using a specially engineered membrane to avoid all the excessive noise.  The speedy, double-tap friendly keys respond to an optimized 60g of actuation force and reset at the perfect level, all of which helps reduce muscle fatigue during marathon gaming sessions. Having used mechanical keyboard in the past, I saw very little difference in performance or feel, but I sure did enjoy my newfound silence, even as I type this review.  And for diehard gamers, you’ll enjoy a variety of textured key replacements for the WADS cluster.

Your programming options are extensive with 21 programmable macro buttons spread around the keyboard and E.Y.E. control module, each with three modes for a total of 63 user-definable commands that are easy to program and assign – the only hard thing will be remembering them all later.  Creating Macros and assigning icons is surprisingly easy using the configuration software. There are already several downloadable profiles out there for WOW, Diablo 3, Minecraft, League of Legends, and StarCraft 2 just to name a few, plus business apps like PhotoShop and Outlook.

I have to admit I was really impressed with just how good this keyboard feels and performs, plus it is quite the eye-catcher sitting on a desk. Normally, switching keyboards is like breaking in a new pair of shoes, but it only took an hour before I felt right at home with the S.T.R.I.K.E. 5, both in typing and in gaming. I’m even taking the plunge into macro programming since there are currently no profiles out there for the Sim City beta. 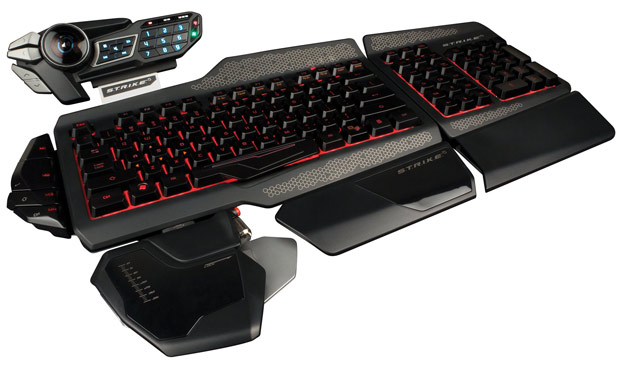 There are some other noteworthy changes between the S.T.R.I.K.E. 7, and S.T.R.I.K.E. 5 keyboards other than the obvious new control module.  The S.T.R.I.K.E. 5 no longer requires AC power but for some reason they switched the palm rests to a glossy plastic which increases the sweat factor and leaves behind ugly palm prints that weren’t an issue on the aluminum rests on the S.T.R.I.K.E. 7.  As far as programming and usability, the E.Y.E. does pretty much everything the V.E.N.O.M touchscreen does; just in a slightly different way, and some may actually prefer the tactile feedback of pressing a real button rather than an icon on a screen.

I can see the logic in Mad Catz trying to offer two similar products in various price ranges, but the S.T.R.I.K.E. 5 is so close in features and functionality that the S.T.R.I.K.E. 7 almost ceases to become a viable option unless you simply must have a touchscreen interface.  When you can get nearly all of the functionality for two-thirds the price, the Mad Catz S.T.R.I.K.E. 5 Gaming Keyboard might just be the best solution for gamers looking for the most tech at an affordable price.