Some designs could negatively impact your gameplay.

You simply won’t believe how much these will improve your gaming, both in precision and comfort for those marathon gaming sessions.

I’ve been an avid fan, supporter, and user of KontrolFreek stick extenders ever since I did my first review back in November of 2011.  Sure, they took a few days to get used to, but now if I pick up a controller and it doesn’t have some variation of the FPS Freek installed…well, I kinda freak out.  And it’s not just about the added level of precision you get when playing your favorite FPS games like Call of Duty or Battlefield, but the near complete elimination of thumb and hand fatigue thanks to the more open grip and straightened thumb use of the twin sticks. 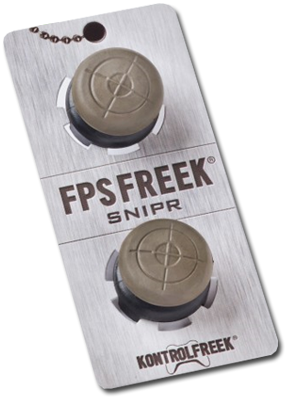 Along with the new generation of consoles comes a new generation of controllers, so everyone with a new PlayStation 4 or Xbox One has a bit of a learning curve when it comes to adapting to the new gamepads.  Many critics are declaring the DualShock 4 the best controller ever created, and I wholeheartedly agree.   Even before I snapped on my FPS Freek SNIPR stick extenders I was already in love with this gamepad; especially the analog sticks with their smooth and accurate motion and concave no-slip tops.   I had already finished Call of Duty Ghosts and logged dozens of hours online, so I had a good idea how the naked controller felt.

After snapping on the SNIPR extenders the DualShock 4 felt instantly unnatural, and not in that initial learning curve.   Over the past two years I’ve spent far more gaming hours using FPS Freek extenders than not.  The same issue I had with the SNIPR when I reviewed it back in 2011 still persists; the convex tops.  Sure, they have the cool targeting reticle embossed on the top, but the bump-top just encourage my thumb to slip off the top time and time again; a stark contrast to the almost suction cup like tops of the unmodified DualShock 4.  Yes, you will get some added precision in the analog movement and aiming controls, but for me personally, the convex top was a deal-breaker.   That’s not to say there isn’t an FPS Freek extender option for your PS4.  There are a variety of models with varying degrees of extension length and concave tops like the ULTRA. 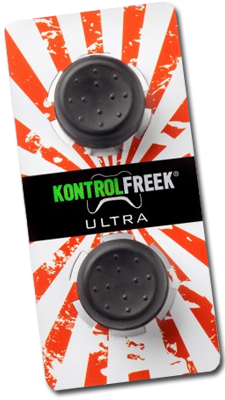 For our Xbox One trial we had a pair of KontrolFreek ULTRA extenders that not only had just the right amount of extension, but concave tops with a nice bumpy texture that had my thumbs sticking like glue to both the analog sticks through even the most vigorous of Call of Duty Ghosts sessions.  The extensions provided some greatly increased accuracy; especially in my sniping, but this added level of responsiveness also proved a bit too much in Forza 5, where using the ULTRA had me bouncing off the guardrails and other cars.  While one might eventually be able to adapt to driving with the ULTRA I found it much easier to simply remove the snap-on extender for this and other games that didn’t benefit from its use.

Whether KontrolFreek has a product that’s right for you depends on the type of games you play and how good you want to play them.   If you were using their products on the Xbox 360 and PS3 then you already know how invaluable they can be.   Not only does the added extension allow for a bit more precision in both movement and aiming (a 40% improvement), the textured surface is great for extended periods of no-sweat, no-slip gameplay. And when you use the FPS Freek in combination with adjusting your analog sensitivity you are getting pretty close to mouse-level precision, and these are 100% tournament legal.

This is a tough product to score since your experience will be as unique as mine.  While I didn’t like the SNIPR, there are probably those who would, and there are just as many gamers who might not like concave tops.  I merely reviewed the two samples that were sent to us, but when given a choice you simply won’t believe how much these things will improve your gaming, both in precision and comfort for those marathon gaming sessions, and priced at anywhere from $14-20 the only thing left for you to do is figure out which style suits you.

Check them all out at http://www.kontrolfreek.com/next-gen-xbox-one-ps4.html/

DualShock 4 and/or Xbox One Controller