Cutting edge game tech for those who want to live their games rather than play them. 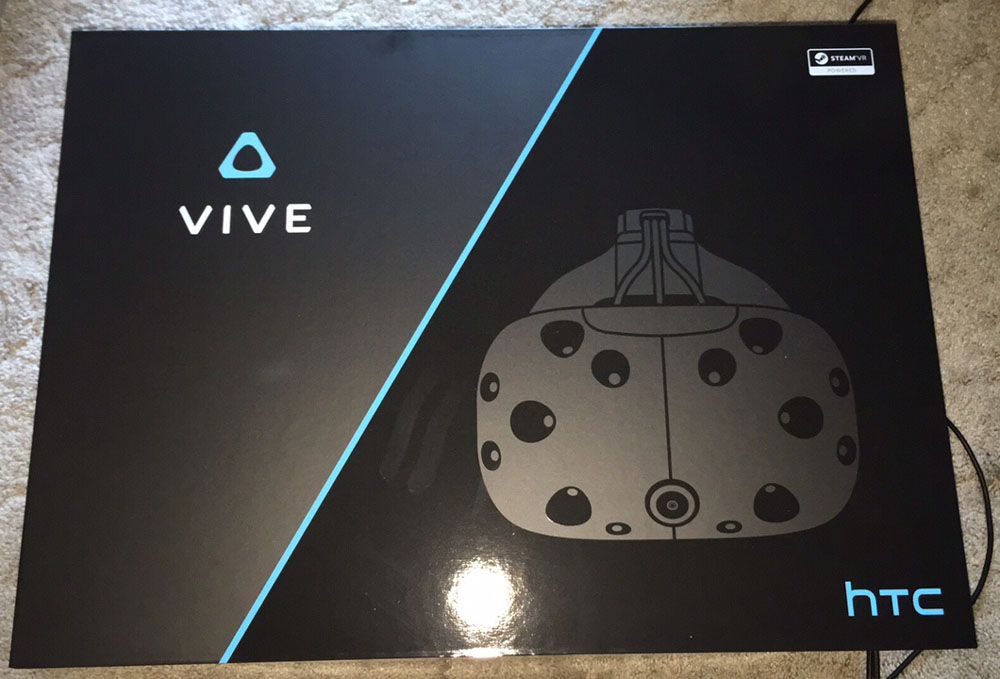 It’s been two months since I wrote my Oculus Rift review and since that time I have spent way too much time neglecting the real world in favor of a virtual one.  Just about the time I was going to get that VR monkey off my back (and headset off my face) the HTC Vive shows up for review.   Time to dive back into VR all over again, only this time it’s going to be a “deep dive” and I need to rearrange some furniture.   Be right back… 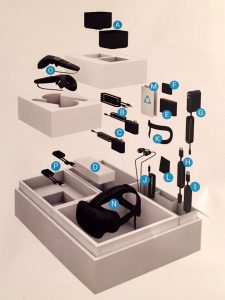 At $799, the HTC Vive is currently the most expense consumer-grade VR headset on the market, but after a week of testing I can easily proclaim it is also the best.   You know something is different the moment you see the impressively gargantuan box with three separate sections, all hiding a second layer of additional accessories below.  I joked that the Rift came with four pieces and one of them is still in the box unused, but you will likely be using everything inside the Vive box.

A single sheet of paper gives you some diagrams on how to possibly free up the required space to enjoy the full capabilities of the Vive as well as where to locate the two sensor boxes that will be tracking the headset and motion controllers.  Vive offers a room-scale experience that works best when you can clear an 8’ x 8’ area.  With a bit of rearranging I managed to clear a 6’ x 6’ area, which still offers a functional play space, but the bigger the area the less chance you’ll encounter those disruptive chaperone lines – more on those later. 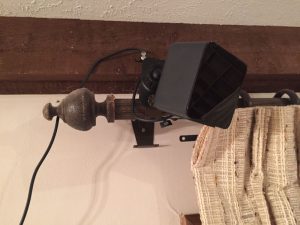 The sensor boxes scan a 120-degree arc so you need to put them in opposite corners of the area so they overlap and preferably get them more than 6’ off the floor so they can accurately track players of varying height.  I was able to set one on the top of a bookcase and another I attached to a curtain rod.  Keep in mind each box needs to be plugged into an AC outlet and you have roughly 10’ of cord, which doesn’t allow for much wire concealment.   The Vive also comes with mounting hardware, anchors, etc. if you are looking to do a more permanent install, or you can attach the boxes to tripods for a less permanent install. 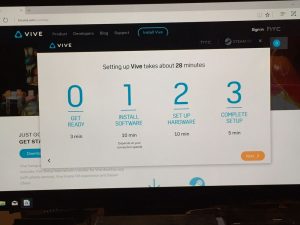 Connecting the rest of the Vive hardware is a breeze.  A powered hub connects to your PC via a single USB and HDMI cable, and your headset plugs into the other side of the small box.   The thick cable coming off the back of the headset is surprisingly long and allows you to move about an 8’ x 8’ space with relative freedom, although you may want to improvise some sort of way to anchor the cord to your waist to keep it behind you.   You do a lot of spinning around in VR and it’s easy to get tangled up.  I also recommend playing without shoes so you can feel when you are stepping on the cord. 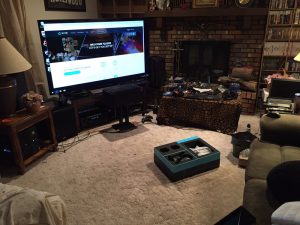 The interactive online installation guide is a pure joy to use, and HTC has given the entire process an almost game-like vibe with little figures than demonstrate what to do and optional movies to watch if you start to freak out.  As you complete the rest of the installation you’ll switch over to SteamVR for the final phase, which includes using one of the motion controllers to trace your available play space by walking around the perimeter while holding down the trigger.  Not only will this determine if you can play room-scale games, it will also create a wire-mesh fence inside VR that alerts you when you get close to the edge of your safe space, keeping you from tripping over a chair or punching a lamp.  You can later to into settings and change the way these chaperone lines look.

For the past two months I’ve been telling everyone how cool the Oculus Rift is, but it only took two minutes inside the Vive VR to realize that Oculus Rift (in its current state without Touch) is really nothing more than a cool set of 3D goggles with head tracking.   When you combine room scale and motion controllers with the stunning imagery coming through the Vive headset you are magically transported to the closest thing to a Holodeck as we will ever see in this lifetime. 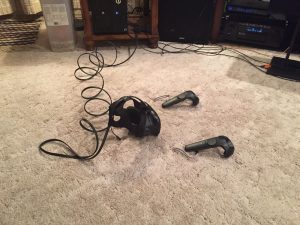 The first thing that impressed me was how accurately those two sensor boxes were tracking me.  The on-screen guide told me to put on the headset so I did, but then I realized I had left the two motion controllers lying on the floor.  I did this all the time with Oculus and always had to peer down my nose in that narrow gap of reality to find my Xbox gamepad, but there were my two wands, perfectly replicated in virtual reality and so accurately tracked that I was able to stand up, take three steps forward and pick them up off the floor with no fumbling.  They were just there in some sort of crazy VR-reality hybrid.

As I stood there marveling at the 3D modeled controllers in my unseen hands I noticed that all the buttons were perfectly rendered and even the pressure of my thumb on the large disc pad was being tracked as a moving dot.  Even cooler, there was LED power indicators on the VR controllers that don’t even exist in the real ones.  But as cool as these 3D controllers were in VR, nothing can really prepare you for when you start going into all the games and experiences and the familiar Vive wands start getting replaced with hands, weapons, and other interactive objects. 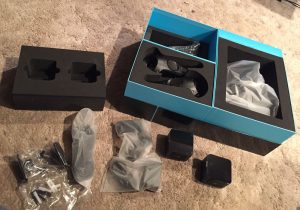 While the HTC Vive has its own Vive frontend you will most likely spend the majority of your time in Steam.  I was surprised with how much Vive content I already had ready to go without having to download anything new.  Many of the games I had already downloaded for Oculus also worked with Vive and there were a few non-VR games that had received VR updates, so I had plenty to do.  But even for those who don’t have a pre-existing Steam library, there is a wealth of affordable and even FREE games and experiences waiting for you in the Steam store.  The first experience I tried is the one I highly recommend everyone with a Vive try as well, and is called The Lab.  Best of all – it’s FREE!

Fans of Portal will love The Lab, but even if you don’t know that first thing about Aperture Science you are still going to have a blast tinkering with all the stuff you can do in this VR experience.  You walk around a virtual warehouse interacting with orbs that transport you to any of several mini-games like Slingshot and Longbow; both shooting games but very different.  Xortex puts you inside an arcade machine in a Matrix-style bullet-dodging shooter, while Robot Repair gives you a futuristic glimpse into 3D modeling and virtual schematics with a humorous twist.  Postcards lets you pick a location then explore in full 360-degree photo reality and maybe play some fetch with a robotic puppy while Human Medical Scan lets you bisect the human body with laser precision, and Solar System lets you scramble the planets circling our sun and then try to return them to their proper orbits.  The Secret Shop is a fun interactive exploration of a magic shop with all sorts of magical secrets and hidden dangers. Between games you can explore the warehouse, play with your growing collection of trophies, and interact with almost everything. 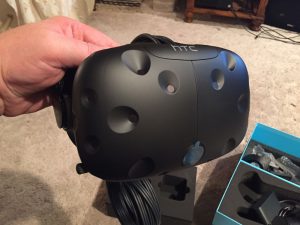 There are lots of free demos and mini-games out there like Dreamland, Waltz of the Wizard, Irrational Exuberance: Prologue, Trials on Tatooine, and my absolute favorite, Portal Stories: VR, a community mod that does require you already own Portal 2, but seriously, anyone with a PC capable of playing games should already have Portal 2.  Portal Stories: VR is basically a set of ten interactive VR puzzles set in the Portal universe and rule set.  When you are ready to start spending some money I can also recommend some other premium VR games like The Solus Project, Pool Nation VR, Fantastic Contraption, Hover Junkers, Raw Data and even some non-VR games that have recently had VR support added like Project Cars, Elite Dangerous, and DiRT Rally.  As of this review there are 398 Vive-supported games on Steam with an average cost of $20 or less, so there is plenty to do in VR and you won’t break the bank doing it.

Until now I’ve been trying to avoid making too many comparisons between the Vive and the Rift, but in a world where most consumers are hesitant to purchase even a single VR solution it’s extremely unlikely you’ll own both, so at some point you are going to have to make a decision.  Both systems have their own pros and cons which should directly factor into what solution is best for you. 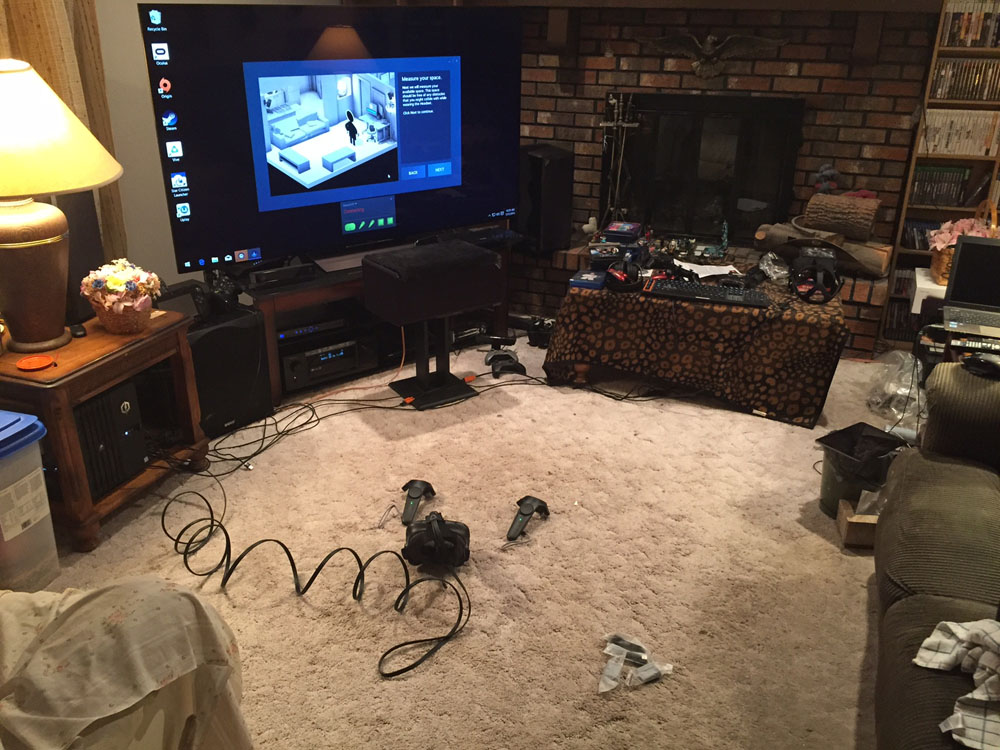 The HTC Vive is an impressive piece of technology that brings the potential for endless new worlds and new gameplay experiences to your living room in a way I never thought I’d see in my lifetime.  Yes, it comes at a premium price, but this is a 100% complete VR solution in a box.  It’s more than just head tracking and 3D graphics.  With the room scale and motion controllers you are completely immersed in whatever game or activity you are playing, and when combined with some good 3D headphones the real world will cease to exist.