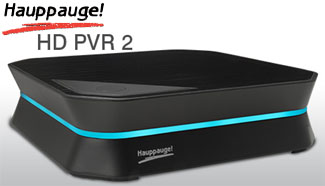 Priced a bit higher than other capture devices, recordings would sometimes randomly stop with no indication.

I found the HD recording process, functionality of the included software, and resulting video quality unrivaled by any other similar product out of the box,

Last year we reviewed a few video capture devices including the Hauppauge HD PVR 2 Gaming Edition and the Roxio Game Capture HD Pro. Both devices had their pros and cons and ultimately delivered on their core promise – to capture gameplay in 1080p HD – but there is always room for improvement, which leads us to today’s review for the new Hauppauge HD PVR 2 Model 1512. At first glance there didn’t appear to be a whole lot of difference between this new PVR and the Gaming Edition we tested last year aside from some new packaging and a light blue recording stripe instead of the “Xbox green” glow from before. I would have to look deeper to find the true differences.

While the new Model 1512 supports and records video from all your favorite gaming devices, it now adds features targeted for home media users who want to use this device (and a connected PC) as a DVR to record broadcast TV. Obviously, for those with built-in DVR capabilities in their current cable or satellite boxes, this is a superfluous feature, so if game capture is all you care about then the Gaming Edition is still your best choice. The HD PVR 2 includes an IR blaster to connect the device to your set-top box and also includes WinTV 7.2, which is fully compatible with Windows 7 and 8 Media Center.

In our reviews last year the Roxio had one thing going for it that Hauppauge couldn’t match, but that has been resolved with the inclusion of StreamEez; new software that allows you to easily live stream your video game play directly to Twitch or Ustream. Provided you have the upstream bandwidth to support it, you can now share your best gaming sessions live with a worldwide audience. This, combined with the TV support is more than worth the $10 increase in price. 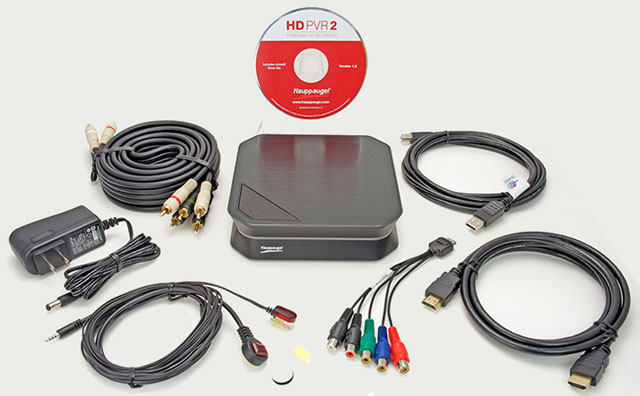 Unboxing the HD PVR 2 reveals a plethora of cables, the small black-box recorder, and the installation disc along with some fold-out instructions. Before installing the software you first need to connect the PVR 2 to your PC as well as insert it into the video feed between your source device and your TV. With the exception of the PlayStation 3, this is an easy and fast process that involves unplugging the HDMI cable from the back of your PC, Xbox, or Wii U and plugging it into the Video Out on the PVR 2. Use one of the included HDMI cables that came in the box to connect the source device to the Video In, plug in the power supply, and you are ready to rock and roll. Those who wish to record from the PS3 will need to use the provided component cables, which may require some additional tweaking in your PS3 configuration if you were already using HDMI. You’ll need to go into your video settings inside the PS3 menu bar and switch to component video output. It’s an annoying extra step, but it’s also the only way around Sony’s HDCP protection so you cannot record Blu-ray movies.

Software installation is just as easy. Insert the disc and run the setup program to install the drivers and the various apps. Once completed. You can also save yourself some time by skipping the CD installation step and going straight to the Hauppauge website where you will almost certainly find newer drivers and updated programs in an updated download pack. With the latest software installed and the device hooked into your system you are ready to record.

The first thing I tried was the WinTV software even though I have yet to use more than 20% of my DirecTV’s 2tb storage space. I admit, I didn’t mess with the IR blaster cable but rather just inserted the PVR 2 into the HDMI path between my box and my TV. Once connected, I was able to easily record anything on my TV using the intuitive software or the even more accessible record button on the top corner of the PVR 2. You can control the format and bitrate of the recordings to balance quality versus size – obviously 1080p will take a lot more space than 720p. You can also pick the encoding type; anything from MP4 and TS formats to H.264, the same format used for Blu-ray discs. This is especially useful if you have a Blu-ray burner since the ArcSoft ShowBiz app easily lets you compile and burn your recordings to DVD or Blu-ray. 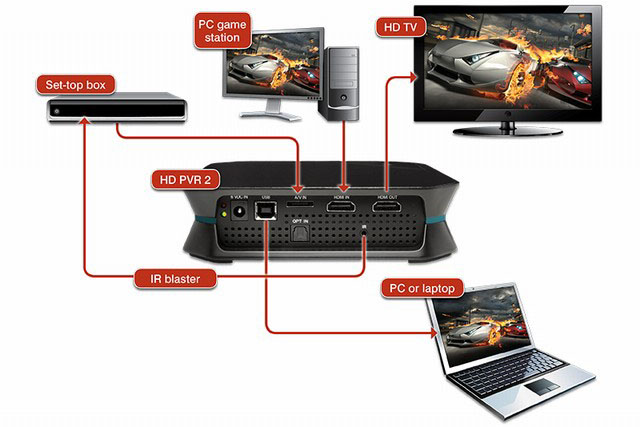 Now it was time to game. I removed the PVR 2 from my DirecTV video path and connected it into my Xbox 360 then fired up ShowBiz and went into capture mode. As I noticed in the Gaming Edition, there was a slight delay in what I was seeing and hearing on the PC versus the actual console, so you’ll want to mute the PC sound to avoid a delay feedback while gaming. Again, you’ll want to find the perfect balance of quality versus size while trying to avoid any ghosting effects at lower settings. You’ll find some useful tips in the forums on the Hauppauge website. Another nice touch is the Personal Logo Insert that allows you to brand your videos and live streams. This is especially nice if you are starting you own regular content channel and want to stamp your ID directly onto your work.

System requirements for using the PVR 2 are surprisingly modest, and my $600 Asus laptop was perfect for the job. You only need a 3.0 GHz single-core or a 2.0 GHz multi-core processor running Windows 8, 7, Vista, or XP (SP3) with 512MB RAM. Honestly, you’ll want at least twice that much RAM and a nice fast hard drive or even better, an SSD drive, if you want to do any serious editing or post-production work on your videos. Mac users can also use the HD PVR 2 but they will have to download third-party apps like HDPVRCapture or Capture4ME.

I captured video for four recently released games using the new HD PVR 2, which you can view here. 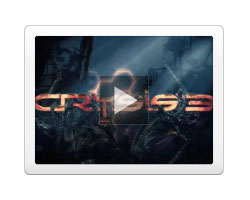 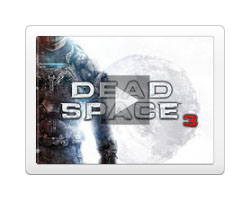 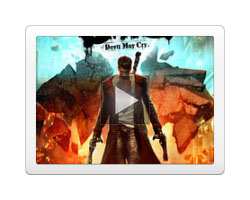 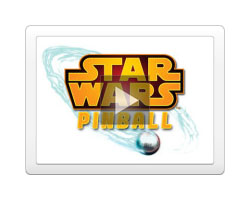 The ShowBiz software is easy to use, allowing you to trim segments, combine multiple clips, and insert various effects, before rendering out your final video. My biggest complaint (which was also an issue on the Gaming Edition) is that ShowBiz limits your YouTube uploads to 15 minutes even if you have an account that supports longer videos. This annoying inconvenience can be easily overcome by simply uploading your videos directly to YouTube outside the software. Videos, especially 1080p videos, can get quite large and take considerable time to upload and process. The four videos I captured for this review took over 1100 minutes combined to get them posted to YouTube.

The Hauppauge HD PVR 2 Model 1512 builds upon the core functionality of the Gaming Edition PVR while adding some potentially useful TV capture features for those with small (or no) DVR’s, and even allows you to create your own DVD or Blu-ray library from those recordings. For those looking to become the next great gaming celebrity, you can now live stream your gameplay sessions and seek fame and fortune on Twitch or Ustream. Personally, I found the HD recording process, functionality of the included software, and resulting video quality unrivaled by any other similar product out of the box, and I look forward to featuring much more HD video content here at Game Chronicles, both as part of our reviews and in our Live Gameplay Video channel. 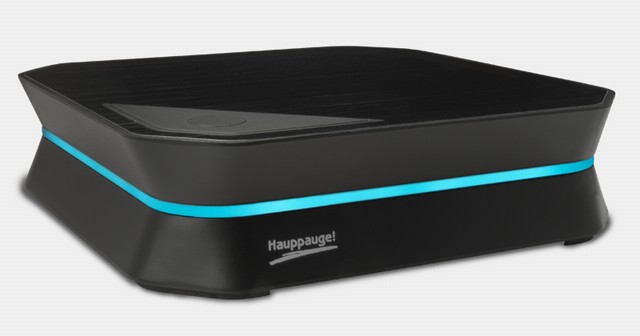 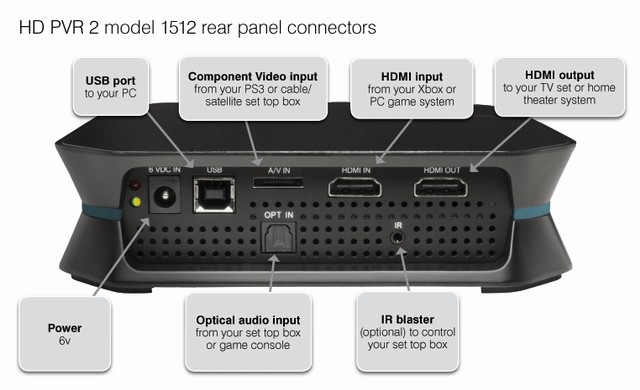 1
49
The Falconeer First-Look Preview – PC
2
45
Synth Riders Celebrates Anniversary with a Month Full of Treats and an Oculus Ques...
3
38
Worm Jazz Review – PC
4
38
Take to the Skies and Choose a Side in the New Trailer for Next Generation Air Com...
5
37
Metamorphosis is 33% Off on Steam!
6
37
Werewolf: The Apocalypse – Heart of the Forest launches on October the 13th
All Original Content on Game Chronicles is Copyright (c) 2002-2020
Sinjin Solves Walkthroughs Copyright (c) 1996-2020 by Mark Smith