From Other Suns Launches On Oculus Rift 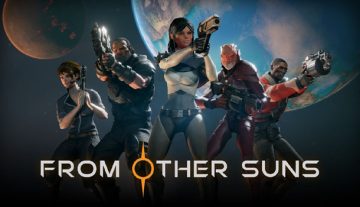 Gunfire Games, a leading independent developer of video games including the award-winning Chronos, today launched From Other Suns for the Oculus Touch. In this action-adventure experience, players will pilot their own ship on a quest to try to save humanity, or just joyride through the galaxy until its extinction.

From Other Suns takes players on an epic sci-fi adventure:

It was supposed to be a simple job.  Test an experimental folding drive to travel beyond the fringes of explored space. Return safely for a big payout, and retire on a small colony to never be heard from again. Things don’t always work out as planned. On the return trip, something followed you back.  Something ancient. Now it’s a race to make it back to Earth before the ancient alien threat wipes out everything in its way – including you.

To make matters worse, it won’t be an easy journey back to Earth.  There’s danger at every jump on this side of the galaxy. Ruthless pirates, lethal robots, and deadly aliens all stand in your way. You and your friends will tour the sector, upgrading your ship, stockpiling weapons, and fighting for your lives.

From Other Suns uses Anomotion, an IK solution for Unreal Engine 4 that provides realistic full body IK for characters. To learn more about Anomotion, visit the website at http://anomotion.com.