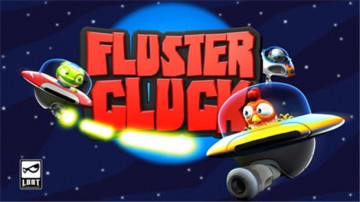 “We are thrilled to finally introduce Fluster Cluck and its classic 64-bit style of couch co-op gaming to a new era of console gamers,” said David Sterling, managing director, LOOT Entertainment. “There is nothing quite like playing side-by-side with friends and family, mercilessly and ruthlessly flustering them and turning everything into “chikkin” in Fluster Cluck.”

The frenetic, tongue-in-cheek, dual-stick shooter places gamers in the roles of out-of-this-world Chikkin Koop employees, working their way up the ranks of Chikkin Koop bureaucracy by “chikkinizing” everything in sight. Players must gather resources by abducting cows, camels, zombies, and even their co-workers… turning them all into tasty – but flustered – chikkin. Battling enemies – and each other – they strive to unlock new weapons, equipment and ships to customize their play style and load outs as they climb the corporate ladder.

Eager Fluster Cluckers can get the game now at PlayStation Store; $7.99 for PlayStation Plus members and $14.99 for non-members.