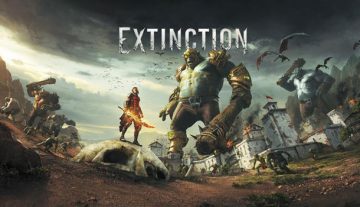 Fresh off the heels of E3 2017, Executive Producer, Derek Neal, walks us through a first look at the world setting and gameplay of Iron Galaxy’s new action-adventure game – Extinction.

The world of Extinction is vibrant and lush, but it’s under siege by a massive army of otherworldly invaders called the Ravenii. The main protagonist, Avil, is one of the last of the legendary order of Sentinels – warriors who are equipped with the skills and tools necessary to take down these fearsome foes. His ultimate goal is to save as much of humanity as possible, by helping civilians escape their imminent doom.

Extinction’s gameplay is fast, fluid, and emphasizes high-speed traversal around the environment. Avil can dash in any direction, run horizontally and vertically along surfaces, cling to walls, pull himself up ledges, and traverse the environment with his whip. He can run on virtually anything, including buildings, mountainsides, and even all over his colossal foes.

Combat in Extinction requires skillfully combining Avil’s wide arsenal of attacks with his extremely high mobility in order to take down the Ravenii and their minions. He can chain attacks together in a variety of ways, as well as cancel his attacks into powerful Rune Strikes (and even dodges). His momentum builds up as he kills minions, dismembers ogres, saves civilians, and completes other objectives. This makes him more powerful, and gives him the energy he needs to land the killing strike.

More details about these game systems will be announced in the future. For now, you can see Avil in action in the gameplay video. Also, be on the lookout for more coverage from E3 2017!

Extinction will be available on PlayStation®4, Xbox One and PC in Q1 2018.

I've been an avid gamer since I stumbled upon ZORK running in my local Radio Shack in 1980. Ten years later I was working for Sierra Online. Since then I've owned nearly every game system and most of the games to go with them. Not sure if 40 years of gaming qualifies me to write reviews, but I do it anyway.
You might also like
Developer CoverageLive Gameplay Videos