Experience The Road To The Olympics 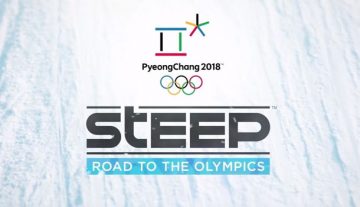 Today, Ubisoft® announced that Steep™ Road to the Olympics, an expansion to the open world action-sports game Steep and an Official Licensed Product of the Olympic Winter Games PyeongChang 2018, will join the groundbreaking gaming and esports competitions that worldwide Olympic top partner, Intel, will host in PyeongChang in the lead up to The Winter Olympics..

To reach this unprecedented event, fans will have the opportunity to qualify by competing and proving their worth via an online competition taking place in December by playing Steep Road to the Olympics. Further details on how to participate in this competition will be unveiled very soon.

With development led by Ubisoft Annecy*, Steep – the open world action sports game featuring ski, snowboard, paraglide, wingsuit, rocket wingsuit, sled, base jump and speed riding – is designed for a culture that’s all about sharing experiences with the world. Steep features seamless multiplayer, populating the world with players as they explore the Alps and Alaska. Players and friends across the globe can take on challenges together, or compete with each other to snag the top spot on the leaderboards. The game’s replay feature expands this experience, allowing players to relive their wildest tricks and memorable lines and even share them as videos on social media. It doesn’t stop there, as challenges can be created from any line to compete with friends and achieve the best time or score based on customizable factors, such as completing tricks to score. Players can also participate in several competitive live programs such as the monthly Steep World Tour, where players take on specific challenges to qualify in tournaments and have a chance to win exclusive rewards.

For more information about Steep, please visit steepgame.com and follow us at facebook.com/SteepGame and twitter.com/Steep_Game.