EDNA & HARVEY: THE BREAKOUT BREAKS OUT ONTO CONSOLES TODAY 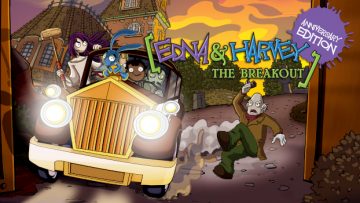 For more than 10 years now, protagonist Edna has been trying to escape from a mental institution; which has proven difficult with acute memory loss. However, trusty sidekick — talking cloth bunny, Harvey — is on-hand to help her recollection of events, not to mention her emotional wellbeing with his penchant for hilarious japes. Their adventure is adorned with many a moment of offbeat humor, as well as some fiendishly abstract puzzles and the usual pop-culture pecadilloes.

For the new console version, the anniversary edition was completely overhauled and the original hand-drawn graphics were lovingly updated — in a high-definition tribute to the classic look of the original. Retro fans and nostalgic gamers can switch to the original graphics in the game menu at any time; with a revised interface and intuitive controls completing the console version.

Edna & Harvey: The Breakout — Anniversary Edition is now available as a digital download on the Nintendo eShop, PlayStation Store and Microsoft Store:

You can find further information at https://www.daedalic.com/edna-anniversary-10th