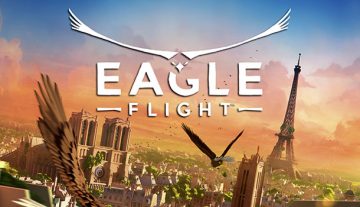 Today, Ubisoft® announced that its first virtual reality game, Eagle Flight™, is now available for PlayStation®VR. Eagle Flight is also available for Oculus Rift and will be released for HTC Vive on December 20.

Developed by Fun House, a division of Ubisoft Montreal, Eagle Flight is set 50 years after humans have disappeared from Earth, where wildlife and nature have taken over Paris. The game lets players explore one of the most visited cities from a new point of view, as a bird of prey. As an eagle, players glide past historic landmarks and weave through narrow streets and secret passages. Players can refine flying skills in single-player, learning new tricks by competing in challenges, or face off in heart-pounding capture-the-prey dogfights against each other in three vs. three multiplayer.

Eagle Flight marks the first virtual reality game launch for Ubisoft, who are also working on Werewolves Within™, Star Trek™: Bridge Crew and a VR partnership with the film company SpectreVision.