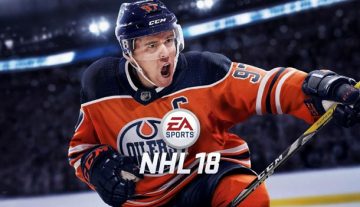 “Representing NHL 18 as the cover athlete is an incredible honor,” said Connor McDavid, Edmonton Oilers®. “I’ve played EA SPORTS NHL every year since I was kid. To appear on the cover, something that has been done previously by so many players that I respect and admire, is very exciting. I can’t wait to play NHL 18.”

NHL® 18 is built to deliver the speed, skill, and creativity of today’s young new NHL through Creative Attack controls and the all-new Defensive Skill stick. The new 3-on-3 NHL® THREES mode introduces fast-paced, arcade-inspired action and, in Franchise Mode, the Expansion Draft feature lets fans be the first to play as the Vegas Golden Knights™, or create and draft their very own 32nd NHL team from the ground up. All of these new features are delivered with the most ways to play multiplayer ever in an EA SPORTS NHL® game. For the full list of features new to NHL® 18, visit the official website here.

Fans can experience the all-new NHL® THREES and more in NHL® 18 first by registering for public beta now. The beta begins July 25, 2017 and will include three modes: NHL® THREES, EA SPORTS Hockey League, and Online Vs. For full details and to sign up now, visit www.easports.com/nhl/beta.

“There’s a huge shift in the sport of hockey right now, where a new generation of young players are bringing more speed, skill and creativity to the game than we’ve ever seen,” said Sean Ramjagsingh, Lead Producer, NHL® 18. “NHL 18 is all about capturing everything that’s great about the new NHL. Creative Attack controls let our players show off all the skill and highlight-reel moves they can imagine, while NHL THREES brings the speed and excitement of 3-on-3 hockey to the game.”

New Creative Attack skill moves give players the control to execute jaw-dropping plays. On offense, creative dekes include between-the-legs moves, one-handed dekes, back-handed toe-drags and much more — like the ability to branch moves together for moment-to-moment decision making. On defense, the new Defensive Skill Stick delivers the tools to counter attacks with poke check targeting, extended pokes, and controlled stick sweeps to cover zones of the ice and take away lanes. New Creative A.I. systems mean teammates now leverage the same tools as the player for intelligent decision-making all over the ice, including board passes and through-passing into space.

Additional features include the new Expansion Draft coming to Franchise Mode, Hockey Ultimate Team™ Solo Challenges, and a new Hockey Training Camp designed to ensure players have immediate success on the ice, and much more. NHL® 18 is also making it easier than ever to play with or against friends, creating more than 64 ways to team up and play on the couch or online, and bringing co-op play to more modes including Hockey Ultimate Team™, Online Vs. and NHL® THREES. See the full feature set here.