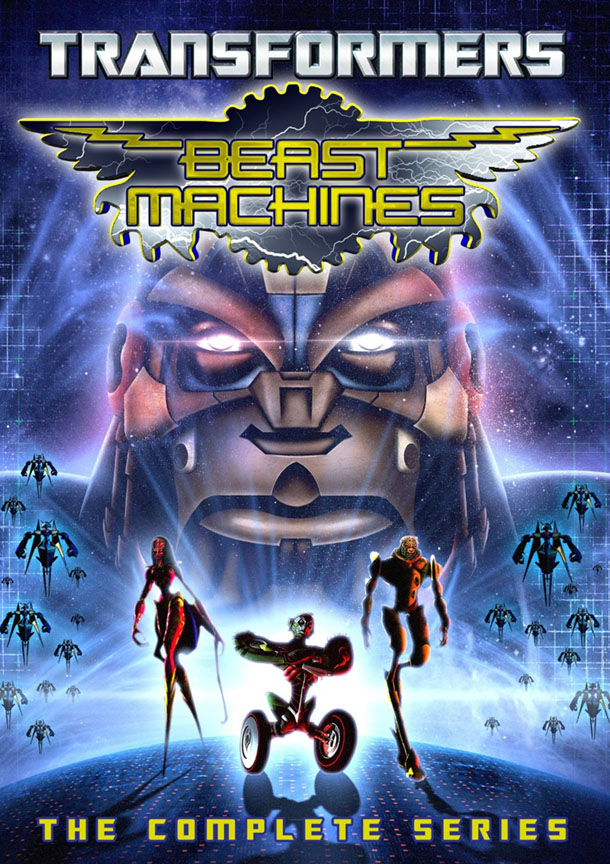 End’s one of the best series to date (G1)
Good price point for what you get (currently $24.28 on Amazon)

Slow story, Doesn’t give you that fulfillment at the end.

A box set you buy to finish up your collection and watch one more time before putting it up on your wall never to be seen again.

I am transformed. Those words make me cringe a little every time I hear them. That’s the core of Transformers: Beast Machines, a little bit of cringe. Beast Machines is the sequel to the Beast Wars show that premiered on April 22, 1996. Beast Machines starts off picks up right where Beast Wars left off with the Autobots, known as the Maximals in this incarnation waking up on their home planet and unable to transform into their robot modes as well as losing their upgraded forms they gained during the Beast Wars, leaving them in their organic animal forms to fend off against an attack by a new enemy called Vehicons, mindless drones which now inhabit their planet.

While they do indeed receive an upgrade in the first few episodes it is not what most were expecting, unlike previous incarnations where they started with basic transformations and progressed into bigger and badder forms they all receive just one alternate form this time around and it’s a mesh between organic and technological, so while Optimus Primal used to look like a gorilla and then a freaking jet/tank plane in the Beast Wars conclusion he ends up looking like an orangutan with wires for a neck, strange indeed.

To date, this is one of the better box sets I’ve had the pleasure of reviewing, included in the box set comes, actual special features! They include:

One of the best parts about Transformers: Beast Machines having been released in a box set is that I finally got to finish the series. I started it when I was younger and loved it for what it was, Transformers at heart. I only saw about half of it on television when it was airing so I never did see the climactic ending I so expected. The box set includes all 26 episodes of seasons 1 & 2 spread throughout four DVDs and come in 1:33:1 Format which is splendid compared to the previous releases having only 4:3. This is ironic as Beast Machines came out in 1999 and we managed to get a better format on it than the Unicron trilogy which all aired in later years.

Though many Transformers fans didn’t appreciate the spiritual overtones and general lack of cast, sure they were mentioned quite a lot due to a good portion of the show being about finding out why they were gone but after having a team of 11 to go down to 6 it was kind of a letdown. The given reason for this isn’t so much to do with story as much as it was just too expensive at the time to show that many CGI characters on screen.

Robert Buckley, who provided the background music for Beast Wars also worked on Beast Machines. Due to the vast differences in setting and mood the music for Beast Machines is much more electronic in nature to better fit the story. Good background music can make the difference between an epic battle and a pillow fight and Robert pulled it off just as well as he did in Beast Wars, that is to say splendidly!

During the series we find out that Megatron, the Decepticon/Predacon leader they were transporting back to Cybertron to stand trial actually arrived well before them and introduced a virus that made all the transformers on the planet either get sick, or die. With no one to fight back Megatron stole all the sparks, or the soul of a transformer and hid them away so he could experiment with them. Honestly, it’s never explained how Megatron single handedly created this virus, managed to take down millions of transformers AND created these drones without anyone noticing.

Unlike Beast Wars that had such a great storyline, and such high production values Beast Machines just kind of says “Here’s the story, deal with it” anyone that has watched Beast Machines I’m sure got the same vibe from Megatron as I did, he basically wants to commit genocide on his own planet and just rule an empty lonely world, what’s the point of being a ruthless leader if you have no one to lead? The Maximals do end up finding that their comrades ended up in the same state as the rest of the planet, they are somewhat reunited later on as they find out that their sparks were put into two of Megatron’s generals leading his new army. One is returned to them, albeit in a very different form than what he used to be while the other turns against them and now sees that Megatron’s way is the correct way of thinking, that being that there should be no organics, only technological beings in existence, while Optimus is searching for a way to blend both into a techorganic being so they can all coexist.

While Beast Machines is the conclusive ending to the G1 transformers saga the way it is done is rather uninteresting way. In the final episode literally everything happens. The good guys lose their base, their sparks are extracted from them and SPOILER!! Megatron steal’s Optimus’s old giant tank/jet body and puts his own spark into it to destroy him, which of course is stopped by Optimus sacrificing his and Megatron’s life by throwing them into a giant spark chasm and reformatting the entire planet into half organic half technological. That’s it. End of G1.

All in all I was glad to finally finish out this series I started so many years ago. I can’t say I was overwhelmed with how it ended up playing out but it does give myself and many fans closure. Will I watch it again? Probably not. But I am glad I did. This is one of those box sets you buy to finish up your collection and watch one more time before putting it up on your wall never to be seen again.