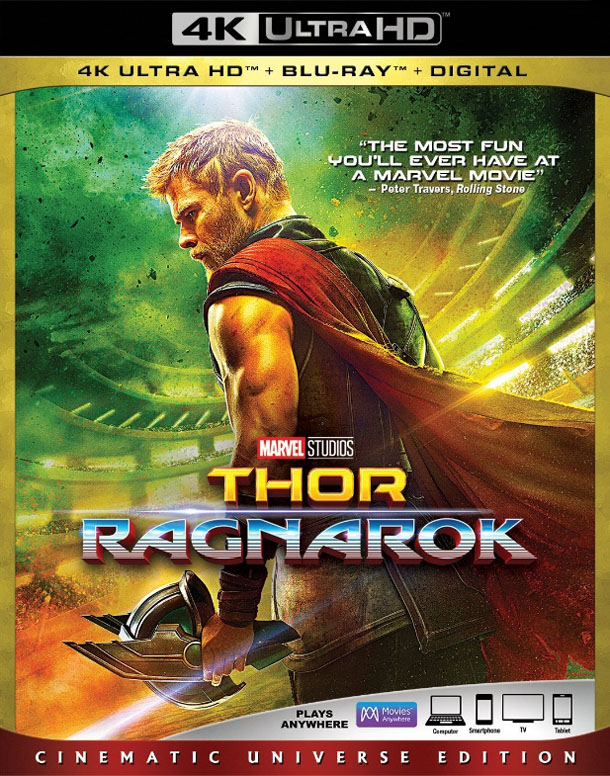 One of the most exciting, entertaining, and visually stunning films in the MCU.

Between the DC and Marvel cinematic universes I’ve given up trying to keep track of all the comic book movies coming out these days.   What used to be yearly releases has now turned into 3-5 major films per year with new movies hitting theaters just about the time the last one becomes available for home viewing. Such is the case with Thor: Ragnarok, the God of Thunder’s third standalone film; although with characters like Loki, the Hulk, and an amusing cameo from the contractually obligated Dr. Strange, Thor’s latest flick is more of an ensemble project, or at the very least a comedic buddy movie when Thor and Hulk/Banner must team up to save Asgard.

To put this review in perspective, of all 18 MCU movies, Ragnarok is my third favorite while the original Thor and Thor: The Dark World are 17 and 18 respectively. It’s not that I don’t like the character or concept of Thor, but I just found his first two movies lacking, both in their entertainment value as well as their contributions to the overall arching plot of the MCU grand design. And while Ragnarok only offered minimal plot elements to the looming Infinity War, it did deliver some of the best comedic moments since Guardians of the Galaxy, some fantastic action set pieces, memorable villains, old and new, and some amazing visuals that defied the previous dark and brooding tones set by the first two Thor movies.

The movie bookends with two epic boss fights, both set to the classic Led Zeppelin “Immigrant Song” (that song doesn’t come cheap). The mix of comedy and over-the-top action is as evenly balanced as it is perfectly timed, as we see a captured Thor taunting the demonic Surtur who is prepared to unleash Ragnarok, the End of Days, upon Asgard. After defeating the beast Thor returns home to find Loki has banished Odin to a retirement home on Earth and has taken the throne, disguised as his adoptive dad. But when the brothers finally track down Odin they learn his time is over, and just as fast as he dissolves into universal pixie dust Odin’s firstborn, and Thor’s sister, Hera (Cate Blanchett) arrives to reclaim the throne.

While Hera tries to assemble her Asgardian army, Thor and Loki find themselves trapped on the planet Sakaar, basically a universal scrapyard ruled by the Grandmaster (Jeff Goldblum) who also operates a giant “fight club “arena. While Loki becomes his unlikely sidekick, Thor is chipped with a shock device and forced to fight in the arena, and his first battle is with none other than the Hulk, who has been trapped on Sakaar in Hulk form for the past two years since the events of Ultron. It is also on Sakaar that Thor meets up with several humorous alien warriors and the last surviving Valkyrie of Asgard who all join forces to escape the planet and return to Asgard to defeat Hela.

While Thor: Ragnarok might not be the most serious of the MCU films, and while it may depart from comic cannon or even combine a few elements of Thor and Planet Hulk; there is no denying this movie is pure FUN from start to finish. The movie is loaded with comedic elements, one-liners, goofs, and even a green, naked Hulk butt – yeah…that’s in my brain, but it is so perfectly integrated into the film that the movie never loses that balance of drama, action, and suspense. It not only makes the movie incredibly fun to watch the first time, but highly entertaining for repeated future viewings.

Performances are impressive with Cate Blanchett totally immersing herself in the epic evilness of Hera. I was also impressed with the developing relationship between Thor and Loki. There is one exchange in particular, as they are riding an elevator to their escape ship that had some truly subtle facial performances. One of the standout new characters is Korg, a CG rock beast who is voiced by director, Taika Waititi, and Jeff Goldblum does his best impersonation of Jeff Goldblum playing an egotistical planetary ruler with his own orgy-inspired birthday party ship. Clocking in at just over two hours, the pacing for Ragnarok is perfect. There was never a dull moment and despite a satisfying ending I was sad when it was over – the sign of a truly great movie.

Thor: Ragnarok is yet another Disney 4K release upscaled from a 2K master, yet unlike previous titles like Coco, this live-action feature was sampled at a higher resolution to ensure that you would see a difference between the 4K release and the standard Blu-ray copy. The boost in quality is obvious and remarkable, both in overall crispness of the image as well as gorgeous boosts to contrast and color thanks to the HDR-10 enhancements.   The UHD version delivers a slightly darker image, which really makes the contrasting elements and vibrant colors leap off the screen, and the overall detail to live-action, facial features, wardrobe textures, and digitally constructed sets holds up to the closest scrutiny. The standard BD disc offers a quality image of its own; just one that is slightly brighter and lacking in overall contrast – something easily detectable in the opening scene with Thor and Surtur.

Equipped with a Dolby Atmos 7.1.4 surround track; Thor: Ragnarok delivers an impressive, if not somewhat subdued audio mix. Once again, much like Coco, when turning on the Dolby Atmos I lost several decibels and had to adjust my volume about six additional notches, but unlike Coco the Atmos mix was actually put to good use; at least in a few scenes. While the LFE was frequently giving my subwoofer a workout, the ceiling channels were used to great effect in the arena battle, where it sounded like there were thousands of cheering spectators seated above me, and in the exciting ship chase/battle, laser blasts whizzed around and over me. Even the final bridge battle became much more immersive with the use of the ceiling channels with ships and lightning bolts overhead. The rest of the mix had perfectly prioritized dialogue with balanced effects and exciting score.

Thor: Ragnarok is loaded with extras; not enough to warrant its own disc, but too much to fit on the 4K feature disc, so prepare to spin up the standard BD copy to enjoy these fine extras. First up is the Director Intro where Director Taika Waititi will delight you with the story of why he became a filmmaker. This is sadly a short interaction that hints at what’s to come in the feature-length Audio Commentary.   This is easily one of the best and most amusing commentaries in my entire 1400+ movie collection.   You’ll be treated to comedic insights, entertaining and insightful observations, and even some scene-by-scene color commentary. I want to watch all my movies with Taika from now on.

Next up are several short character-specific features including; Getting In Touch With Your Inner Thor that discusses how Thor has evolved over the three films and the choice to add more humor to Ragnarok. Unstoppable Women: Hela & Valkyrie give a worthy shout out to the film’s female characters, portrayed by Cate Blanchett and Tessa Thompson. Finding Korg delivers even more humorous backstory to the creation of the film and one of its most unlikely new favorite characters voiced by Taika Waititi. Sakaar: On the Edge of the Known and Unknown showcases the planetary design and sets of Sakaar, a planet so original it becomes its own character in the story. Journey Into Mystery explores the film’s place in the MCU along with inspiration and influences from both the comics and the artwork of Jack Kirby.

Bonus features start to wind down with that obligatory two-minute Gag Reel, and then there is Team Darryl, an amusing feature showcasing The Grandmaster. Marvel Studios: The First Ten Years – The Evolution of Heroes is a five-minute look at some key MCU characters and their evolution throughout the Avengers films and the upcoming Infinity War. There are nearly six minutes of Deleted & Extended Scenes, most of which are enjoyable and understandably removed from the final cut. Last up is 8-Bit Sequences, two key action sequences from the film rendered in fairly simple computer animation storyboards. The Cinematic Universe Edition also comes with a Movies Anywhere code and iTunes download that looks great on both my iPhone and iPad.

Thor: Ragnarok sets a new high bar for having fun in the MCU. As I mentioned earlier, this is now my third favorite movie in the MCU, topped only by Civil War and Winter Soldier; a ranking based purely on the fun experienced while watching. One only need look as far as this film’s director to see where Ragnarok gets its inspiration, and while it does come dangerously close to tipping the comedic scales toward the Guardians of the Galaxy side of things, Thor maintains just the right amount of danger, suspense and darkness to balance it all out. While not immediately apparent to the overall progression of the Infinity War story arc, Thor: Ragnarok is some great filler content that catches us up on key characters and sets up the epic two-movie finale with amazing action and one of Disney’s best 4K live-action home releases to date.