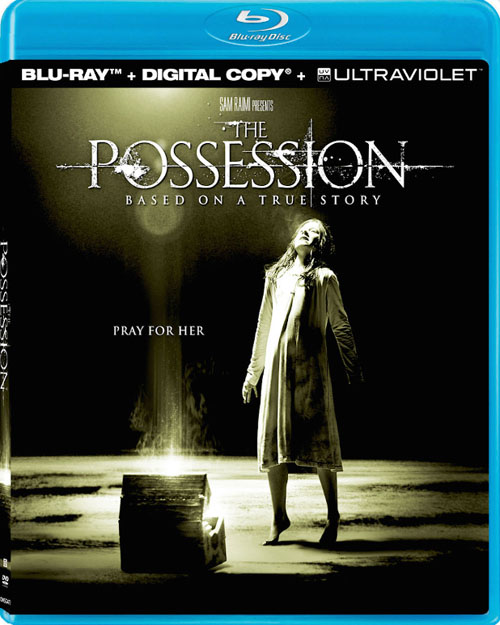 Natasha Calis standout performance as Em is reason enough to watch this film.

Movies about demonic possession are nothing new, nor are the “based on a true story” tag that prefaces many of them, but unlike most of these fictionalized accounts, The Possession may be the first film whose “true story” is actually more terrifying than the film itself. Of course, the producers make sure to enhance the fear by including ample warnings, even when viewing the bonus documentary features lest you become possessed through your TV.

While The Possession has drawn numerous comparisons to the granddaddy of all possession films, The Exorcist, I found this story much more enjoyable, thanks to much more interesting characters, situations, and even the surprising use of Hebrew spin versus the seemingly standard Catholic or Christian flavor you expect from these films. Nothing speaks overwhelming evil like a room full of seasoned Hasidic Jews refusing to exorcise a demon, shaking their heads and saying, “let God sort it out…”

Of course the real reason to see this movie is the captivating performance by Natasha Calis who plays Em, the younger of two sisters who becomes host to the terrifying evil inside a dibbuk box that her father (Jeffery Dean Morgan) buys for her at a yard sale. Her attachment to the box grows stronger with each passing moment bordering on full-on obsession, forcing her father to dispose of the box, but Em’s supernatural link to the demon allows her to find the dumpster and the demon enters her body.

There are some interesting twists and directions the writers took when crafting the script for this movie. By putting Em in a recently divorced and dysfunctional family the early effects of the demonic spirit are simply attributed to her home life, and by having the box at her father’s house, who she only sees on weekends, keeps her mother (Kyra Sedgwick) in the dark for much of the film. The evil spirit drives the wedge deeper into the family unit by simulating physical abuse on Em, causing mom to get a restraining order on her ex-husband, which makes it slightly more challenging when it comes time perform the exorcism ritual.

I’m pretty jaded when it comes to horror movies, especially when they are only PG-13, and while there was some genuine moments of “suspense” the movie never really scared me. This was mostly due to the fact that all of the signature moments had been spoiled in movie trailers and TV spots. If the director was trying to make a big deal of the tense slow camera zoom down Em’s throat to reveal those two fingers clawing their way out perhaps he should have not allowed that clip to be seen two months in advance of the film.

The presentation for The Possession is surprisingly good for a rather unremarkable, and at times, quite depressing looking film. I’m not sure if that is a testament to the inherent overcast climate of Vancouver or any color grading in post, or possibly both. When there are moments of color they do pop, and the detail level, blacks and contrast are as sharp as you expect and want from a Blu-ray movie. The effects are suitably creepy and there is some great cinematography, although the numerous top-down transitional aerial shots started to get annoying.

The audio is a step above the visuals with an outstanding DTS-HD MA 5.1 mix that perfectly mixes the dialogue with sinister sound effects and some fantastic music that really heightens the tension. There is great use of positional audio in the 3D space, especially the subtle whispers and chants from the dibbuk box. I also enjoyed the way the film ended each major scene with a single sustained piano note.

I’m a big fan of commentaries, especially when they are good ones and The Possession offers up two tracks; one from the Director, Ole Bornedal and one from the Writers, Juliet Snowden and Stiles White. The first is rather spotty and at times I would forget I was listening to the commentary until Ole would suddenly say something. The writer commentary is a non-stop barrage of information presented in an organized and entertaining manner that somehow keeps pace with the film. I especially enjoyed their anecdotes about their visits to the set. Both commentaries are very generous in their admiration of Natasha Calis and her performance that goes far beyond her years. Perhaps the most chilling of any extra on any DVD I own is The Real History of the Dibbuk Box Featurette, a 13-minute documentary that tells the story of the “real” dibbuk box that inspired the film. If this is real and not some elaborate Blair Witch hoax then it’s pretty scary, otherwise it’s a brilliant marketing scheme. Extras conclude with a theatrical trailer and a digital copy that looks great on my iPad as long as you are watching in a dark room.

With so many possession movies circulating these days it is all too easy to fall into a cookie-cutter mentality when it comes to making them as well as watching them. I really enjoyed the whole Hebrew angle of attack when it came to crafting this story. It added a unique spin to something that could have just as easily fallen prey to Catholic or even a Hellraiser mystery box camp. A great cast with an interesting and believable family dynamic also helped sell the events, but Natasha Calis standout performance as Em is reason enough to watch this film and start looking forward to more roles in what is going to be a very bright future…assuming she stops playing with creepy wooden boxes.