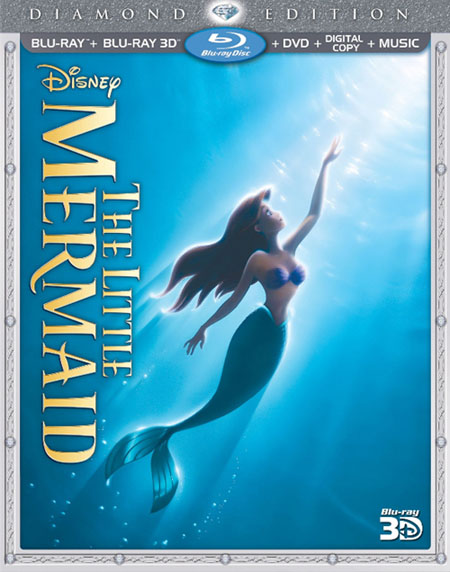 I was 25 years old when The Little Mermaid swam into theaters and with no kids of my own, then or now, it’s probably no surprise that I have never seen what is arguably one of Disney’s most pivotal animated features. In the grand tradition of updating the classics, Disney has just released the Diamond Edition of The Little Mermaid celebrating her 25th birthday, and in addition to a host of new HD features as well as all the classic DVD extras, we also get to see Ariel in all her 3D glory.

The story, based on the fairy tale by Hans Christian Anderson, is sweet and simple and totally targeted toward teenage girls (say that five times fast). Ariel herself is a teenage girl, admittedly a mermaid but still a teen at heart and a rebellious one at that. Despite being warned of the dangers above the surface of the sea, Ariel insists on collecting various treasures from the forbidden world and wants nothing more than to see a real human. Concerned father, King Triton assigns Sebastian the Crab and his sidekick, Flounder to keep a watchful eye on his daughter, which means plenty of comic relief for the audience. Things move rapidly from there as Ariel meets (and falls in love with) Prince Eric, but when the King finds out he locks Ariel away in her room. Naturally, she escapes, meets a witch who offers to trade Ariel’s voice for a pair of human legs, and things start spiraling out of control from there.

While The Little Mermaid holds up artistically, the story seems a bit antiquated, especially when compared to female-empowered leads in movies like Tangled and Brave. But even the most liberated of female viewer, regardless of age will be able to find some relatable material in this movie. Even in this day of powerful female executives, I’m guessing more than a few women fantasize about getting swept away by a handsome prince; especially one of which dad disapproves. 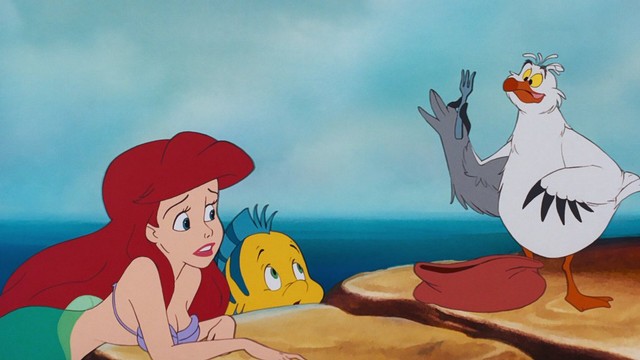 Where The Little Mermaid shows her age (in a good way) is in its presentation; both its iconic hand drawn artistry that included the first use of the CAPS digital coloring system, and some of the most memorable music of any animated feature in the Disney library thanks to the inspired work of composer Alan Menken and lyricist Howard Ashman. While technology has certainly advanced in the past 24 years there is no denying the stunning character design and all the subtle touches the animators managed to work into this film – something that motion capture has conditioned us to take for granted these days. Interestingly enough, the animation team actually based a lot of their work on live-action reference material.

Blu-ray often doesn’t add much to the technical presentation for these older features but The Little Mermaid holds up surprisingly well, both with its new and nearly flawless 1080p/MVX 3D version and the just-as-pleasing 1080p/AVC 2D transfer. Despite obvious disparities of this movie when compared to something like Finding Nemo, there were times when I was entirely more captivated by the animation and performances of these classic characters versus Pixar’s digital perfection. Colors aren’t as rich as you would expect and there is an overall softness to the image at times, but there is not a trace of banding, noise, or other artifacts to be found other than a slight and totally acceptable amount of film grain. 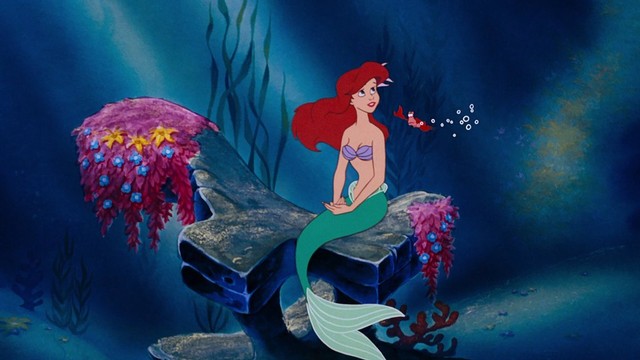 The 3D version is best described as “unnecessary”. While it works on the most basic of technical levels, the original film was never designed to benefit from added depth, so instead of having this undersea world spill into your living room, as it did in Finding Nemo, The Little Mermaid turns into something more akin to a pop-up book where the characters seem to rise off their backgrounds. It’s more distracting than anything, and even though the 3D version is free from ghosting and aliasing issues found in other post-3D conversions, it’s probably not worth the expense or the hassle of wearing those glasses for 83 minutes.

Audio purists will appreciate the new DTS-HD MA 7.1 audio mix just as much as Disney purists will lament the loss of their 6-track Dolby Stereo original mix that surprisingly wasn’t included on this disc as an optional track. Thankfully, those audio engineers worked their magic and managed to update the soundtrack without destroying the pure and simple mix of the original. Dialogue and lyrics are prioritized and there is some surprising LFE at work that adds to the experience without being distracting. The front channels are definitely favored while the side and rear speakers are used mostly for environmental effects to create an aurally authentic undersea experience. 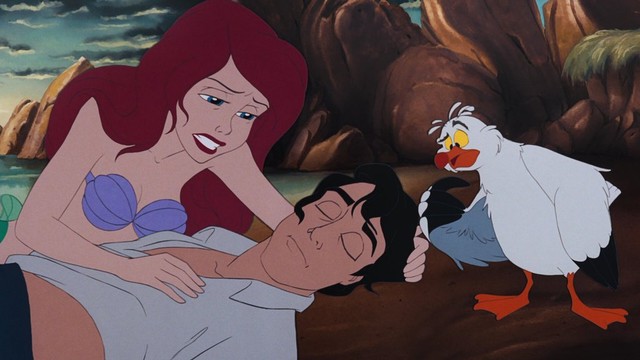 The Little Mermaid – Diamond Edition delivers the goods when it comes to bonus features with an all-new set of HD extras including; @DisneyAnimation, an 11-minute series of interviews kicked off by Little Mermaid directors John Musker and Ron Clements and then goes on to talk with several other animators. This is a great feature that deserved to be at least three times longer. Under the Scene, is a cool look at how the animators used live video reference to aid them in animating some of the tougher scenes. Howard’s Lecture is a great memorial feature for the late Howard Ashman, a writer and lyricist who died in 1991. Musker and Clements talk about their Deleted Character: Harold the Merman who never made it into the final film. Part of Her World is a 5-minute feature that follows the Ariel voice actress, Jodi Benson as she takes her own kids to Walt Disney World and Ariel’s Grotto in New Fantasyland. For those who like to sing along with their favorite movie songs, Crab-E-Oke Sing Along lets you do just that with “Part of Your World,” “Under the Sea,” “Poor Unfortunate Souls,” “Les Poissons” and “Kiss the Girl,”. Last up for the HD extras is the Carly Rae Jepsen Music Video “Part of Your World.”

Also included are all of the extras from the previously released classic DVD including a full Audio Commentary with directors/writers Ron Clements and John Musker and composer Alan Menken who offer some technical insights into the film. It’s more educational than entertaining. There are seven Deleted Scenes, some quite lengthy and all totaling 26 minutes. The Backstage Disney is a collection of nine features ranging from a one-minute look at a secret Little Mermaid handshake all the way up to a six-part, 46-minute production documentary. Music & More duplicates a bit of the karaoke content from the other sing-along extra and adds in the Ashley Tisdale music video, “Kiss the Girl”. Disneypedia: Life Under the Sea is a short educational video about undersea life targeted for kids. Under the Sea Adventure is a cool virtual theme park ride while Behind the Ride that Almost Was is a look at the abandoned plans for a Little Mermaid theme park attraction.

The Diamond Edition includes 2 BD discs, one for 3D and one for 2D, a standard DVD copy, and a digital download code that works for iTunes. As previously mentioned, the 3D experience, while free from any annoying glitches normally associated with post-3D conversions, is just underwhelming and not worth the added expense at purchase or hassle of wearing the glasses and dimming the already-soft imagery of the film. But regardless of whichever version you end up getting, no Disney movie collection is complete without this treasured classic. If you have kids; especially daughters, prepare for lots of repeated viewings and endless sing-alongs. 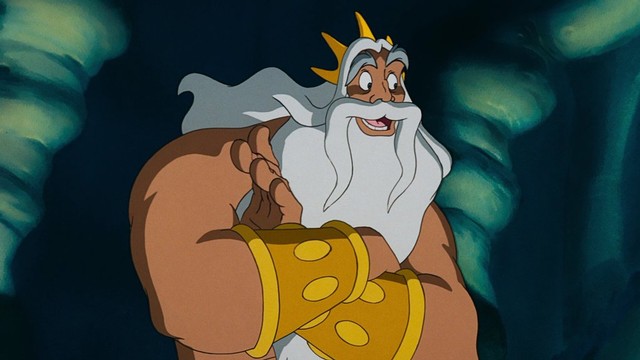 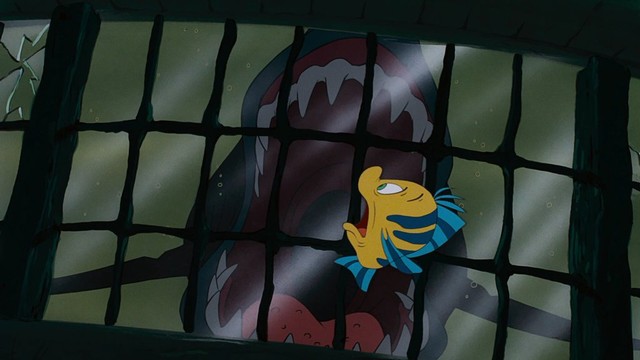 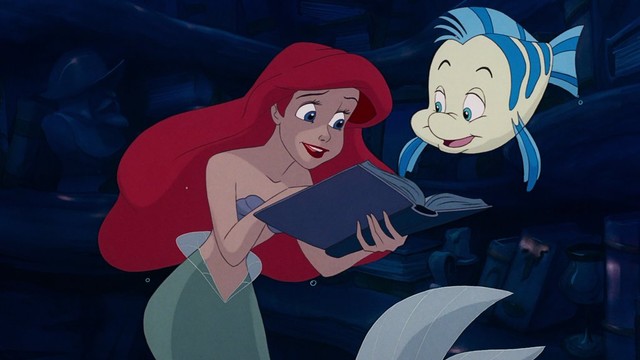 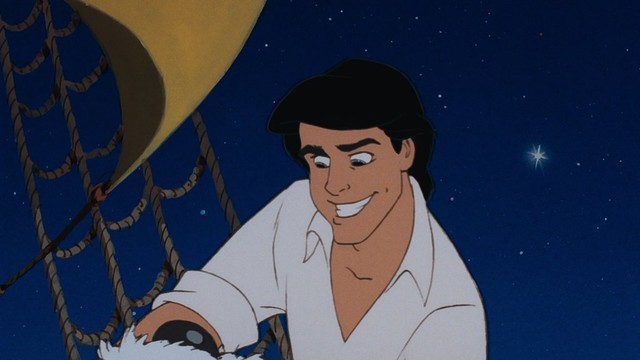 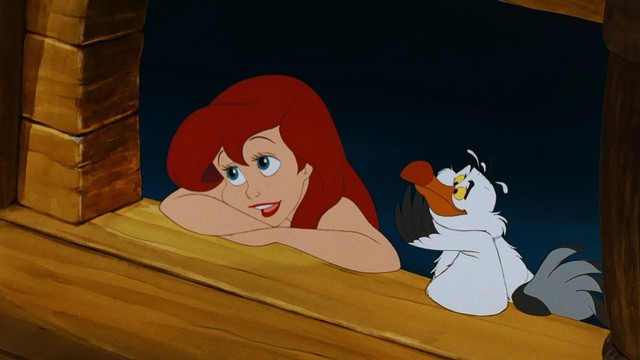 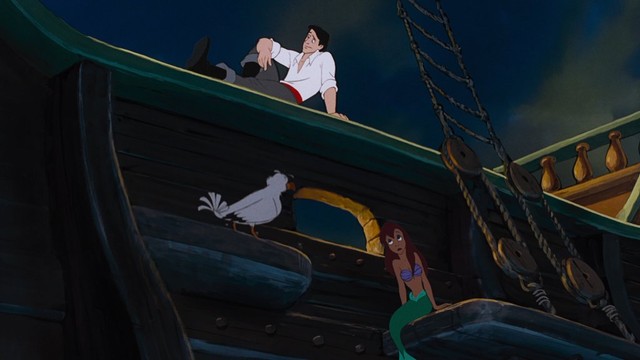 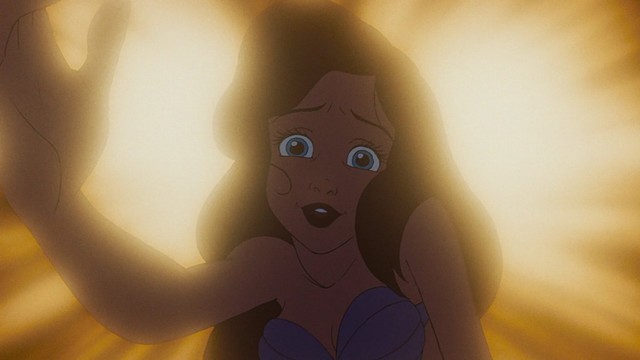 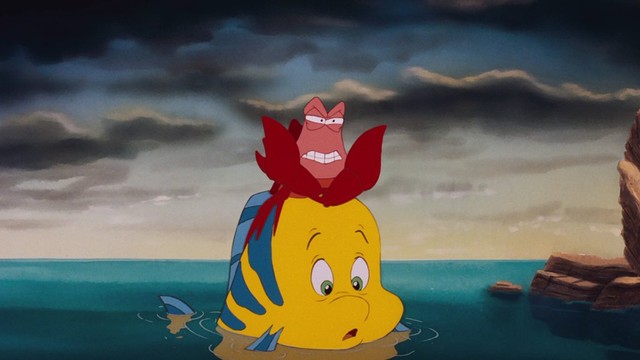 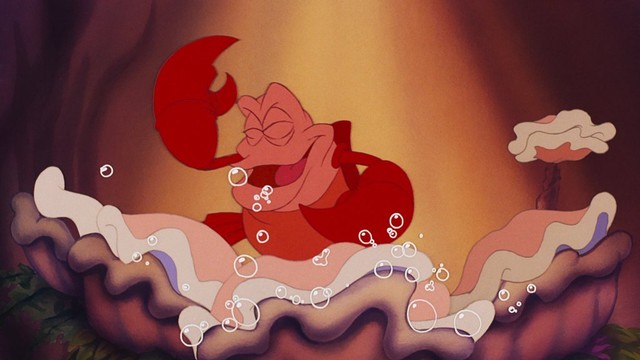 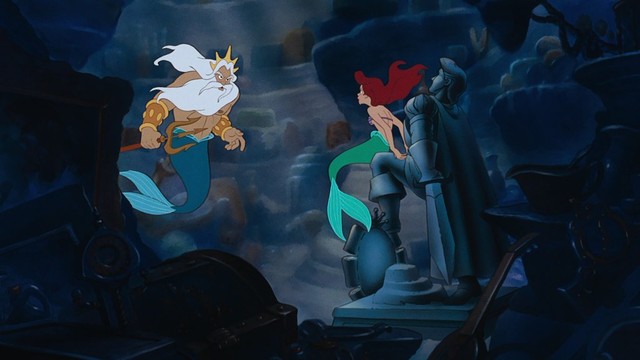 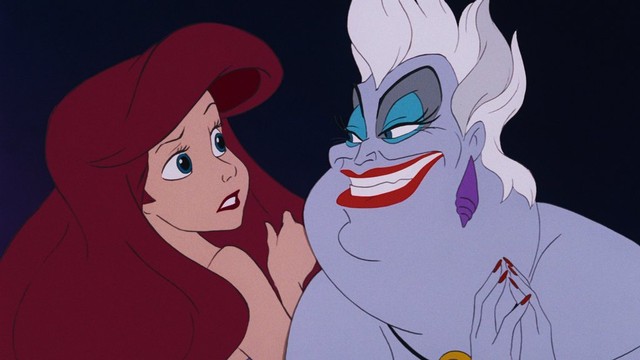 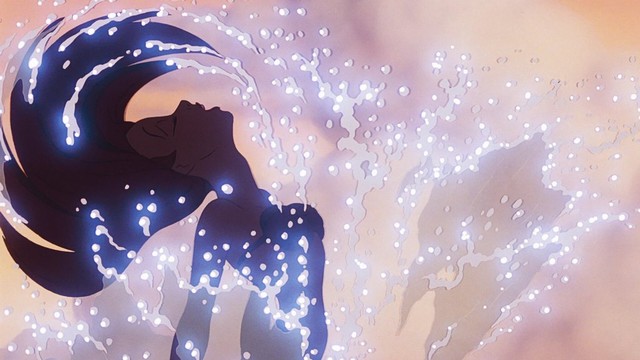 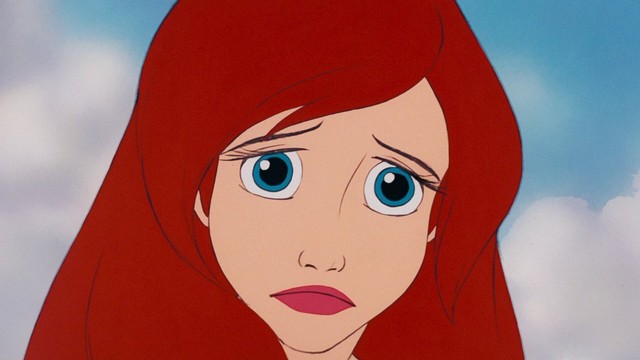 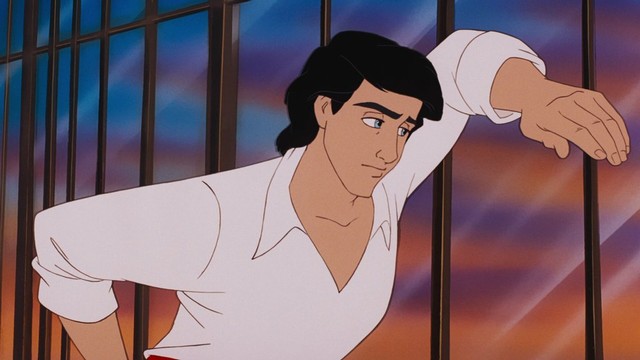 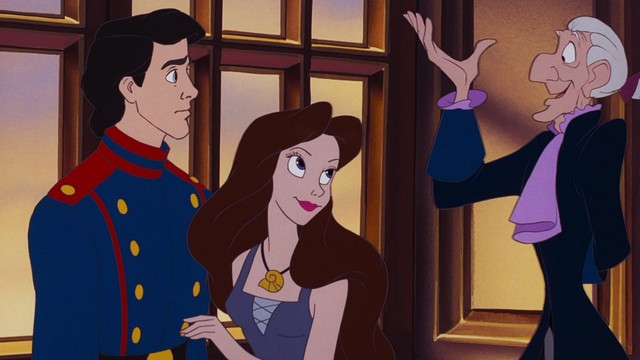 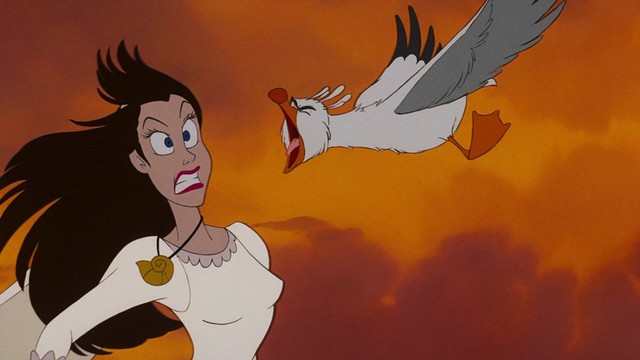 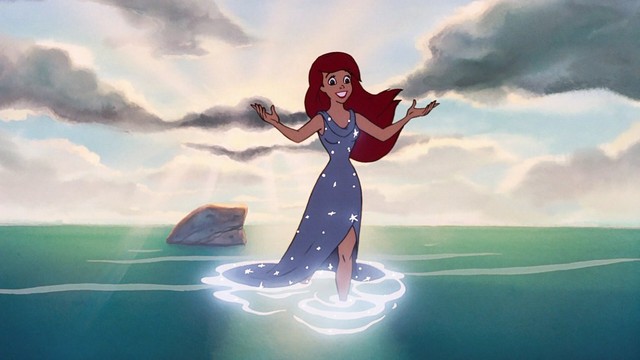 I've been an avid gamer since I stumbled upon ZORK running in my local Radio Shack in 1980. Ten years later I was working for Sierra Online. Since then I've owned nearly every game system and most of the games to go with them. Not sure if 40 years of gaming qualifies me to write reviews, but I do it anyway.
You might also like
walt disney