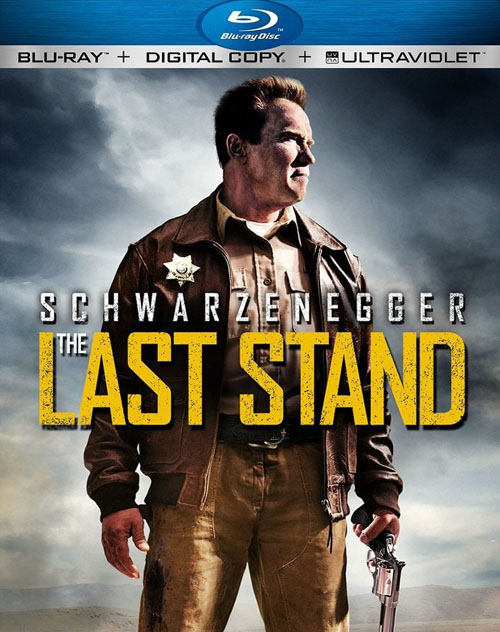 90’s action movies are back...see Arnold do what he does best.

What do aging action stars do when they can no longer perform the duties of their required genre roles? They become sheriff. In some instances this may be a sad reality version of the job such as Steven Segal in his Lawman series, but Arnold Schwarzenegger is still a few flops from being forced to reality TV hell, so he gets a shiny new movie. Fresh off his former roles as California governor and Trench in the two Expendables movies, Arnold takes on the role of Ray Owens, the sheriff of a sleepy Arizona border town that is about to see a lot of action.

Sommerton is about as small as it gets. Imagine a town so small that when the local school sports team goes to an away game the entire town follows (even the mayor) leaving behind the sheriff, his two deputies, and a few supporting cast members to carry the story through to the end. And while it’s not much of a story it certainly makes for a surprisingly entertaining action movie. The real antagonist of the film is drug lord, Gabriel Cortez (Eduardo Noriega) who manages a daring escape during a prisoner transfer in Las Vegas. Now behind the wheel of a Corvette ZR1 (the fastest consumer production vehicle in the world), he and his FBI hostage are racing for the border. The only thing between him and freedom are a few hundred miles of desert, a canyon, and Sheriff Owens.

The movie bounces between the two simultaneous plots, showing us the FBI frantically trying to capture Cortez, while Ray tries to manage his misfit assortment of law enforcers played by Jaimie Alexander, Zach Gilford and Luis Guzmán. Johnny Knoxville lends his own unique brand of comic charm to the mix as the local gun enthusiast who runs his own weapons museum that will come into play during the third act standoff. Forest Whitaker plays the stereotypical government agent who has lost control, and Peter Stormare seems to live in his role as Cortez’s guy in charge of his escape. And while only being able to work with expressive gestures and a translator, South Korean director, Kim ji-Woon, still managed to assemble this eclectic cast and sophomoric script into a truly authentic, albeit modern-day western action movie.

As Cortez races toward Sommerton Ray’s day just keeps getting worse the moment he starts to investigate some suspicious truckers in the local diner. It’s not long before he has a murder to investigate that slowly starts to fold back into the impending arrival of Cortez. To say more would ruin the surprises the story manages to cling to until the perfect reveal moment.

The Last Stand has it all from raging gun battles to one of the most epic car duels in cinematic history. Imagine a Corvette ZR1 and a shiny red Camaro ZL1 going head to head, not on the open road but in a acres of corn as high as an elephant’s eye. We get to watch these two cars (and their drivers) stalk each other before the eventual “mano e mano” fisticuffs showdown with Owens and Cortez on the Mexican border.

The Last Stand looks and sounds amazing on Blu-ray with a strong AVC 1080p transfer that preserves the original digital source material that springs to life with rich colors, solid blacks, great contrast, and crazy amounts of texture detail in both character close-ups and overall environmental detail. The energetic action sequences are expertly covered from all the best camera angles to make the most of the moment while putting the viewer right into the scene. One particularly memorable moment is when Arnold tackles a rooftop sniper and the camera follows them both right over the edge.

The audio totally complements the action with its DTS-HD MA 7.1 mix that continually pumps LFE goodness from my subwoofer while surrounding me from all channels with the raging shootouts and sweeping VROOM’s of high performance muscles cars speeding across my screen at nearly 200mph or the thunderous collision of a bladed dump truck crashing a police roadblock. The soundtrack is a great blend of energetic action and subtle western tunes and it’s all perfectly balanced so you don’t miss a word of the script.

The Last Stand is unfortunately missing a commentary track and a cast commentary would have been so great for this film. We still get several quality extras including; Not In My Town: Making The Last Stand, which is basically 28 minutes of interviews and behind the scenes footage with Producer Lorenzo di Bonaventura. Cornfield Chaos: Scene Breakdown is a great 11-minute documentary that focuses on Chevy’s two muscle cars and their epic battle. The Dinkum Firearm & Historic Weaponry Museum Tour, is an 11-minute feature that talks about some of the weapons used in the film. Consultant Larry Zanoff offers some historic credibility for this feature. Actor-Cam Anarchy: with Johnny Knoxville and Jaimie Alexander is 10 minutes of first person footage shot by these two actors on and around the set of the film. And finally, we have 8 minutes of Deleted Scenes and 14 minutes of Extended Scenes, along with iTunes and UV digital copies of the film.

The Last Stand marks the triumphant return of Arnold Schwarzenegger back to films in a leading role. Sure, it might be a safe action formula but if it ain’t broke don’t fix it and Kim ji-Woon manages to put a unique spin on the formula creating a wholly unique modern western that will entertain, thrill, and even make you laugh. 90’s action movies are back, and I can only hope that The Last Stand marks a rebirth of a genre that, until now, seemed to have lost its vision. I highly recommend to all action film fans who want to see Arnold do what he does best.