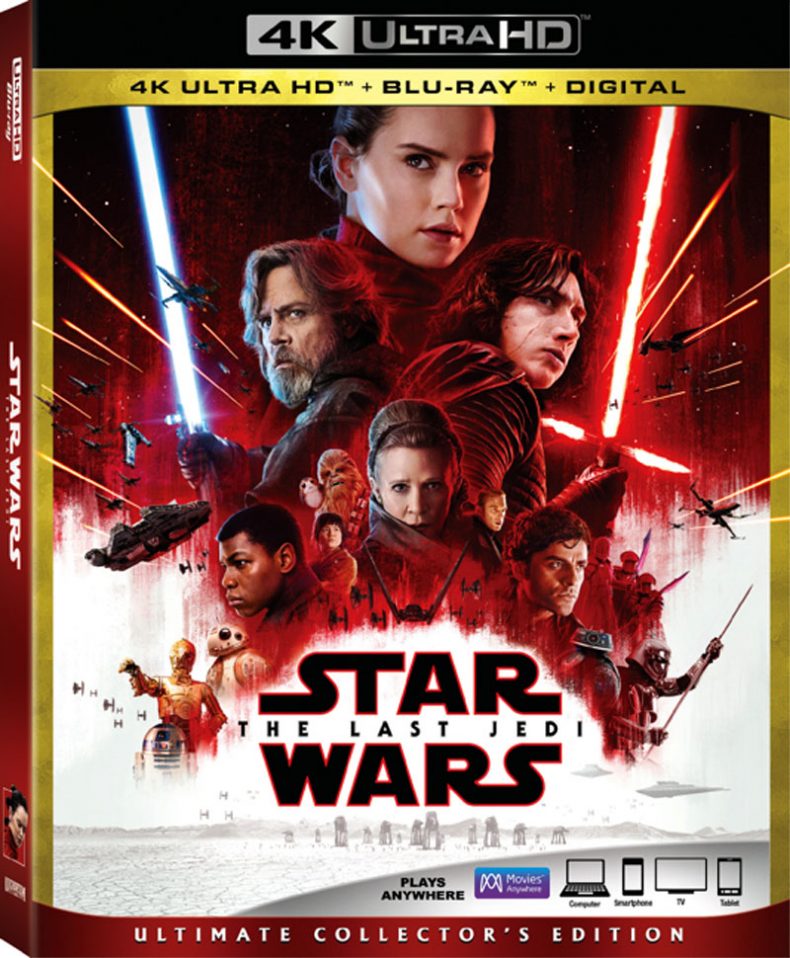 Nearly destroys the franchise in its misguided attempt to reboot it.

I’m going to do my best not to get into all the “problems” with The Last Jedi, partly because they are all rooted in story and script and ultimately subjective, and partly because after watching the tremendous amount of bonus content I actually started to come around to Writer/Director Rian Johnson’s mindset when creating the eighth installment in the numbered Star Wars franchise. That’s not to say I’m ready to forgive him for mercilessly crushing all the intrigue J.J. Abrams setup in The Force Awakens – in fact I’m more inclined to blame Abrams for turning over such a treasured franchise to a guy whose only real claim to fame is Looper. I guess J.J. can think about what he’s done while trying to get the train back on track in Episode IX.

Star Wars: Episode VIII – The Last Jedi begins with the traditional title crawl followed by a rather spectacular space battle inspired by an evening of the filmmakers watching WWII flicks. Much how George Lucas drew inspiration for his dogfighting X-Wing vs. TIE Fighter scenes from similar movies, Rian and crew chose to replicate dramatic bombing run sequences for Last Jedi’s opening moment. It’s also in these early moments we get a bit of Monty Python humor; the first of several out-of-place comedic tangents in the film. One ship against a fleet, Poe should be soiling his flight suit instead of making prank phone calls, or at least be engaging General Hux more seriously.

But sadly, there isn’t much serious about this movie. The entire film boils down to a chase in space where the first one who runs out of gas loses. Forget the fact that in space you don’t require sustained engine burns to maintain speed, only acceleration. And why can’t the more powerful Imperial fleet close the distance to the rebels? And since you couldn’t possibly have the entire movie taking place on ships, Rian crafts this B plot where Finn and new character, Rose need to sneak aboard the Empire’s Destroyer to shut down a tracking device, but to get onto the ship they have to visit a casino planet to find “a guy” who can get them on the ship. This is truly a video game plot if I ever heard one where the quests keep stacking up, and even worse, the entire B plot is for naught when their plan ultimately fails in the eleventh hour.

For those looking for answers to the questions asked or hinted at in Force Awakens, prepare for disappointment. Snoke is a joke, Rey is trailer trash, Poe goes from hero to jerk, and Leia trades her hair buns for previously unseen Jedi powers that Ben Kenobi wishes he had. It’s one thing to be “Force sensitive” but to somehow use the Force to withstand the vacuum of space and then fly through it is guaranteed to rile up the fan base. It was the perfect opportunity, one of two actually, for the film to give Carrie Fisher’s character a heroes’ ending, but I guess we had to have that one last moment with Luke.

I’m going to stop talking about the story because it just makes me grumpy on what could have been, but sadly, this was not my movie. I’m merely a spectator to the vision of Rian Johnson, much like how Mark Hamill was quite vocal in his displeasure for the direction Luke was taking in this film, yet was obligated to portray Rian’s vision. What I can say is that this third trilogy of films does not share the cohesive narrative arc that George Lucas had in his mind when creating Episodes 4-6 and even 1-3. As bad as those prequels were, there was a follow-through plot from Jar Jar on Naboo to Anakin’s transition into Darth Vader. It will be interesting to see how J.J. Abrams can save and finish this franchise in Episode IX.

Setting aside the subjective elements of The Last Jedi, there is no doubt this is technically one of the finest 4K offerings to come from Disney since they started doing 4K releases. Captured on film, the movie retains a perfect amount of grain on the 1080p Blu-ray, and while a bit more obvious on the native 4K disc, never gets distracting. If anything, the added levels of texture detail and improved contrast, thanks to near-flawless HDR and 12-bit Dolby Vision support, put this movie into the reference class of home video. Skin tones are perfect, star fields are sparkly, and with inky darks and blinding whites, it looks like every Stormtrooper just bleached his armor. All the colors and wonderful details in makeup and costumes glimpsed during the smooth pans and flythrough of the casino must be viewed numerous times to appreciate the detail of the source material and the way it was captured to disc.

The Last Jedi features an epic Dolby Atmos mix that makes spacious use of all the channels to put you into the movie. While the DTS 7.1 mix on the Blu-ray is reference quality in and of itself, the added Atmos height channels really add to the immersion of space battles or crazy casino city escapes. Side channels are employed to swirl the audio in this mystical way when Rey and Ren are doing their Force Skype chats, and the LFE is off the scale when Fathiers are stampeded through Canto Bight or space ships are blowing up. Of course, the best audio cue in the entire film (perhaps cinematic history) is the one of pure silence – you’ll know it when you don’t hear it. Sound levels are perfectly balanced and mixed so you won’t miss a word of dialogue, even when the triumphant John Williams’ score soars to chilling heights.

I was totally blown away with the scope and quality of the bonus material found in this Ultimate Collector’s Edition. Sure, you get the standard Blu-ray along with the 4K disc and the digital copy, but the encyclopedic nature of the bonus disc really made me see the film in a new light. You’ll have to watch the BD copy to enjoy the feature Audio Commentary with writer/director Rian Johnson who does an admirable job defending his choices even before I had the chance to confront him – not like that will ever happen. He explains how he analyzed the characters from the last film and chose their best journey, and while that may not match my vision or millions of other fans, none of us were asked to write this movie.

Moving on to the dedicated Bonus Disc we start off with a 95-minute, all-encompassing documentary called The Director and the Jedi, which I honestly enjoyed a bit more than the movie. Quality video coverage mixed with interviews and a behind the scenes look at soundstage and location shooting was educational and entertaining and shows just how much collaboration goes into a project of this size. Balance of the Force is a short look that mirrors much of the commentary discussion on the place the Force has in the Star Wars universe and how it all relates to Luke, Leia, Ren and Rey.  Andy Serkis Live! gives us a rare look at Snoke’s throne room encounter with Rey before the digital puppet was put in place. We get to marvel at Andy Serkis’ raw and powerful performance, as he embodies the villain in body and subtle facial movements. Forget the Oscar…just give this man a lifetime achievement award.

Scene Breakdowns provide extensive looks into making three of the film’s major set pieces; Lighting the Spark: Creating the Space Battle, Snoke and Mirrors, and Showdown on Crait.  You’ll certainly have more appreciation for these scenes after watching this. Next up are 14 Deleted Scenes totally 23 minutes that can be viewed with or without Rian Johnson commentary. Several of these scenes should have been left in the movie while other scenes should have definitely been recut to include at least a portion of what got left on the cutting room floor. There is some really good stuff here and even Rian Johnson laments having to cut a lot of it. His and our only condolence is that we at least get to see these scenes on the home release.

Thankfully, it’s the bonus features that not only turn Star Wars: Episode VIII – The Last Jedi from a flop to a hearty recommendation, but also managed to change my entire opinion of the film. While I still disagree with much of what Rian Johnson did with the material given to him, at least after hearing why he did what he did I can respect those choices and even appreciate the film in a new light. And for those looking for their next reference quality UHD title, it doesn’t get much better than the flawless audio and video ensemble Disney has managed to create showcasing the best of the tech.   It’s just sad that such a marvelous technical achievement had to be attached to such a divisive movie.

1
677
CRASH BANDICOOT 4: IT’S ABOUT TIME IS AVAILABLE NOW
2
677
Worm Jazz Review – PC
3
676
Frictional Games Shows Off First Gameplay Footage of Amnesia: Rebirth
4
676
The Falconeer First-Look Preview – PC
5
676
Metamorphosis is 33% Off on Steam!
6
676
Werewolf: The Apocalypse – Heart of the Forest launches on October the 13th
7
676
Synth Riders Celebrates Anniversary with a Month Full of Treats and an Oculus Ques...
8
676
Take to the Skies and Choose a Side in the New Trailer for Next Generation Air Com...
9
675
DIRT 5 Gameplay Clip Tours China’s Countryside
10
675
Join the Galaxy’s Finest as Star Wars™: Squadrons Soars Into Homes Today
All Original Content on Game Chronicles is Copyright (c) 2002-2020
Sinjin Solves Walkthroughs Copyright (c) 1996-2020 by Mark Smith