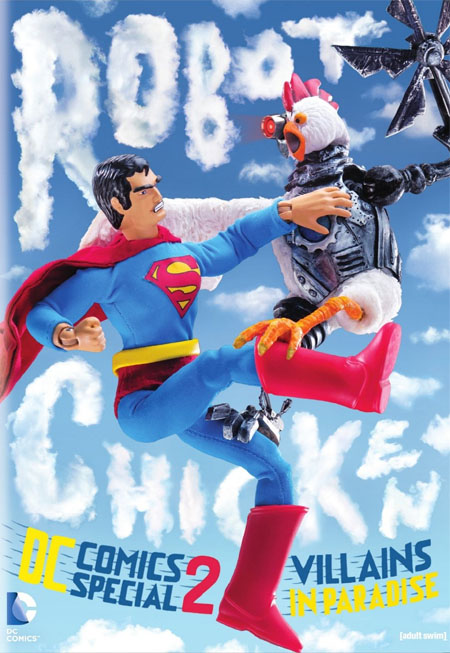 Unrated so you get to hear your favorite super-heroes and villains swear. Alfred Molina rocks out as SEXX Luthor.

Lot's of comedic misfires in this collage of skits and channel flips. Hard to justify paying for what you've probably already seen for free.

Definitely worth $10 if you are into the bonus material.

Just when you thought it was safe to go to the beach Robot Chicken DC Comics Special 2: Villains in Paradise unleashes an epic battle of good versus evil, all set against the classic Spring Break genre films from the 80’s. They even manage to work in a Grease-inspired tale of star-crossed lovers when Superboy and Lex Luthor’s daughter, Lena try to escape their parents polarizing career choices for some sexy fun on the beach.

This 20+ minute special includes numerous skits and channel flips that will bring back fond memories of the 70’s-era Super Friends while adding in some new DC characters than have become more popular in the past 30 years. The episode is clearly divided into two acts with the first half taking place in the Legion of Doom headquarters and focusing on inter-office politics and some relationship drama, but things really take off when Lex Luthor learns his daughter has snuck off to Spring Break with Superboy.  Much to the peril of Swamp Thing, he flies the entire headquarters to the beach for an epic showdown with a surprise enemy that forces an unlikely alliance. 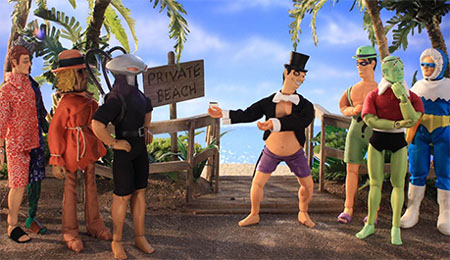 The second half of the show redeems the entire episode with some of the best sight gags and sketches of anything DC-related in the past. Watching Penguin and his gang timidly venture out onto a Private Beach sans swimwear is priceless, but the Grease-inspired musical with Lena and Superboy is second only to SEXX Luthor’s 80’s hairband tribute to Lana Lang.

I was particularly impressed with the talent assembled for this special. Sarah Hyland takes a break from Modern Family to voice Lena Luthor while Zac Efron makes the perfect Superboy.  Nathan Fillion gives surprising depth to Green Lantern while Giovanni Ribisi totally goes for it as The Joker and Two-Face.  Clancy Brown is an unforgettable Gorilla Grodd and Paul Reubens makes the perfect Riddler.

Of course the regular Robot Chicken cast is all there with Alex Borstein doing Wonder Woman, Breckin Meyer doing Superman and Bizarro, Tara Strong reprises her role as Harley Quinn, and Seth Green does just about everyone else. Of course the star of the show is the unforgettable performance of Alfred Molina as Lex Luthor, SEXX Luthor, and Green Arrow.

If you read my review for the first DC Comics Special you might remember I had some issues with the DVD release that was basically charging a movie price for a less-than-thirty-minute special, while keeping all the content censored and offering up only a smattering of extras.   Things have changed but not much.   While the 22-minute special is retailing for $15 you can find it for $10 pretty much anywhere.  At least this time they released the special uncensored so all the bleeps are gone – oddly enough you will hear them during the commentary tracks as they much be watching the TV cut. 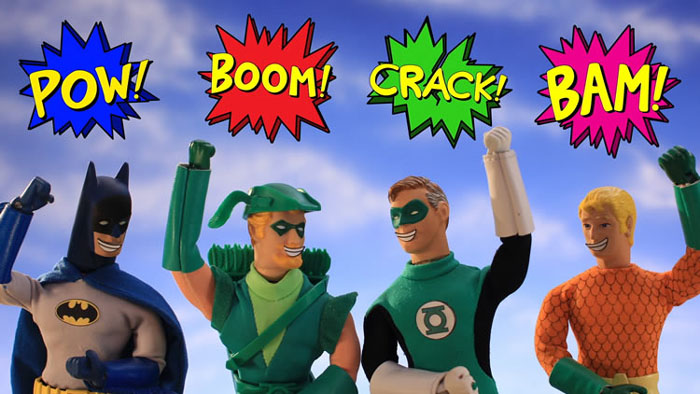 Speaking of commentary, there are once again two tracks, one with the actors and another with the writers, and while they seldom talk about what is actually taking place on the screen they at least talk about the show and provide some amusing and insightful stories. Chicken Nuggets allows you to watch the show and hit the Enter button when prompted to see sketch-specific storyboards, animatics, and commentary.  There are three making-of featurettes that cover everything from the entire special to going deeper into the musical numbers and the sketches that got cut.  20 Questions is a fun DC trivia quiz presented to the Robot Chicken staff that proves just how little they know about the DC Universe.  Some of the best laughs are reserved for the six Cut Animatics and the two Cut Sketches. 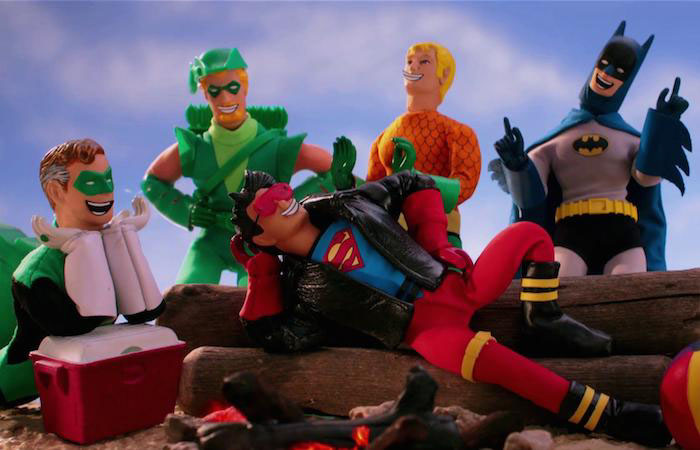 Robot Chicken DC Comics Special 2: Villains in Paradise is still a tough sell considering it’s already been on TV and you can likely stream it without paying $10-15. Ironically, the only reason I would even recommend buying this is for the bonus content and the Robot Chicken staff preface their main behind-the-scenes documentary by saying that “nobody ever watches bonus content”.  They even ask that if you do watch the extras you tweet them at their various Twitter accounts, which I highly recommend you do.  If they think nobody is watching this stuff they might stop taking the time to add it, and when that happens there is zero reason to buy their DVD. 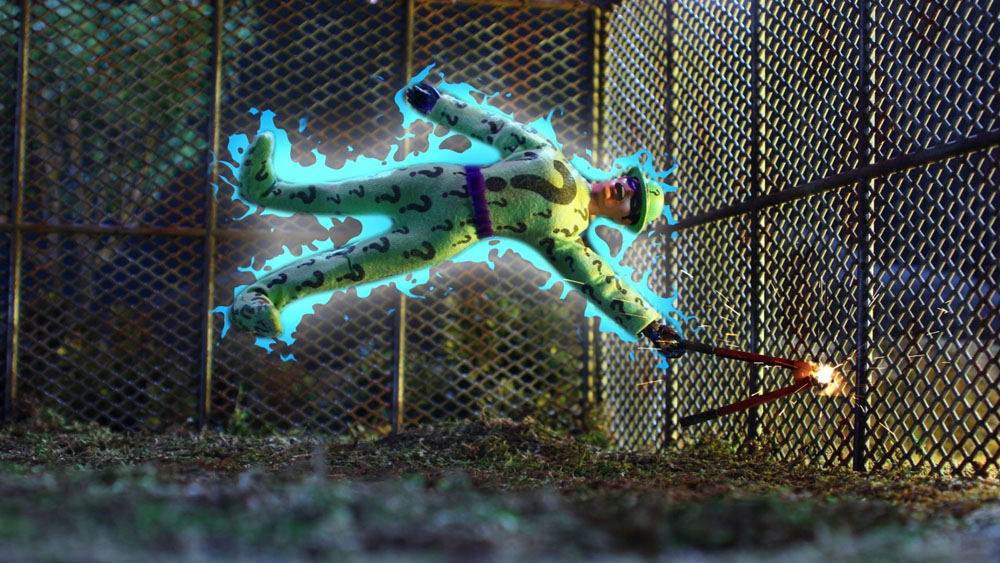 Robot Chicken has taken some positive steps in this new release. I was surprised they didn’t release this on Blu-ray like the first, but then again, the content doesn’t really require the clarity of 1080p and it would likely just drive the cost up.  I appreciated the uncensored version of the show and the more focused commentary by the actors and writers.   The selection of bonus content was much better this time around, and the entire product made for a highly entertaining afternoon of comic book comedy and some great laughs. 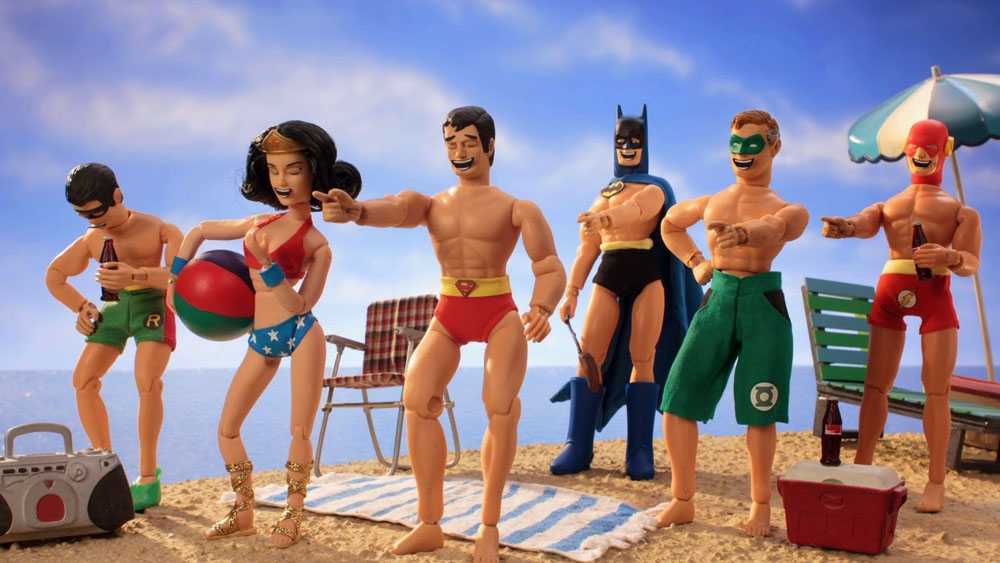