SIZZLIN'
TOP 10
1
765
The Walking Dead: Saints & Sinners Review – Oculus Quest
2
706
Synth Riders Celebrates Anniversary with a Month Full of Treats and an Oculus Ques...
3
704
Worm Jazz Review – PC
4
704
Take to the Skies and Choose a Side in the New Trailer for Next Generation Air Com...
5
704
CRASH BANDICOOT 4: IT’S ABOUT TIME IS AVAILABLE NOW
6
704
Join the Galaxy’s Finest as Star Wars™: Squadrons Soars Into Homes Today
7
704
The Falconeer First-Look Preview – PC
8
704
Metamorphosis is 33% Off on Steam!
9
704
Werewolf: The Apocalypse – Heart of the Forest launches on October the 13th
10
703
Frictional Games Shows Off First Gameplay Footage of Amnesia: Rebirth
DVD/Blu-ray Movies
621 views 1 like 0 comments
Posted June 4, 2013 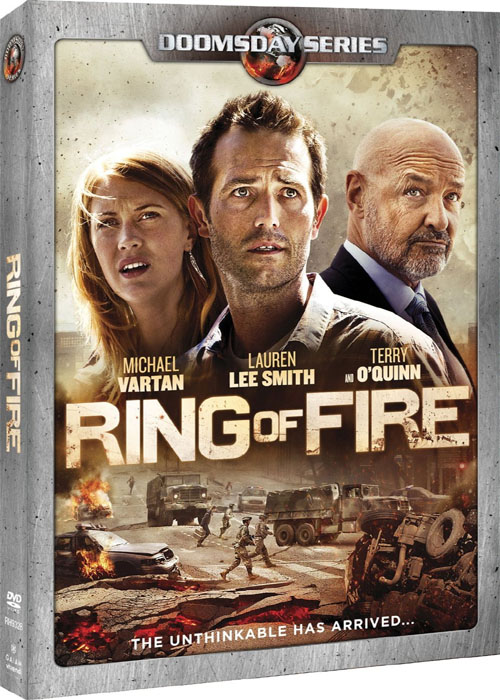 Conceptually and technically one of the worst movies I've ever seen.

I was actually looking forward to reviewing Ring of Fire when I signed on for this project. The description of the “ultimate disaster” flick along with a somewhat impressive cast certainly looked good on paper (or in the email pitch), but now after watching this dreadful piece of cinematic garbage I really want my 176 minutes back, not to mention the time it’s taking me to write this review. I even considered not writing a review. After all, nothing I am about to say is going to “help” sales for this release, but since this movie is still a week away from hitting stores I’ll consider this a public service announcement and hope I can spare you the pain of purchasing, renting, or even watching this film.

First off, this is a DVD review and not a Blu-ray review. I haven’t watched a non-Blu-ray movie in over three years. Even my Netflix streams at higher resolution than what I was about to watch, so I will refrain from making any technical comments that pertain to the format for which I am reviewing, such as the fuzzy picture, washed out colors, and virtually no contrast or black levels whatsoever, and keep my visual complaints limited to the director, cinematographer, and perhaps the camera man who need to be immediately expelled from their respective unions and never allowed to work in film again.

Every scene that is not a close-up (and I mean EVERY scene) is shot from this “stalker perspective” where the camera man is lurking on the set hiding behind something so that there is ALWAYS some fuzzy, out-of-focus crap in the foreground obstructing your view. Even worse is that the camera is in constant motion moving back and forth, left to right and back again so that all this blurry crap is continuously moving in what should otherwise be a static shot. There were numerous times when I started to get physically ill from the effect and had to look away. Even in the outdoor shots the camera would dip down behind tall grass so you would have these blurry green blades streaking through the image.

While we’re on the technical side of the discussion let’s talk about sound. The sound mix is adequate; certainly nothing as dynamic as you would get in a lossless mix on Blu-ray, but there were times when the dialogue was difficult to hear, and despite both the back of the box, Amazon, and every other source I’ve checked claiming this has English subtitles – THERE ARE NONE! There is no setup menu on the DVD – merely a selection to start Part 1 or Part 2, and if I use my remote to force subtitles on I get the message, “There are no subtitles available for this title” in the middle of my screen.

Technical issues aside, Ring of Fire is just a bad movie. Imagine the worst movie you’ve ever seen on one of those Saturday night SyFy features; either a disaster movie or a monster movie with some lame CG, and it will be more entertaining than this. I have never seen a disaster movie with so much box hype that totally failed to deliver on any of its promises. And I quote from the back of the box, “Ring of Fire is a 3-hour white-knuckled thrill-ride”. Really? Considering this is conceptually nothing more than a poorly conceived retelling of the 1997 Dante’s Peak with some big business corporate conspiracy thrown in, I would recommend Pierce Brosnan’s feature any day over this tripe.

For an action-disaster movie there is simply no action and no disaster. In the first few minutes we see an underwater eruption that sends a few hundred fish floating to the surface of a lake. Later we see (or rather don’t see) pockets of invisible CO2 gas kill some cows and a boy’s puppy, and much later a volcano erupts after a futuristic oil-drilling company breaches a pocket of compressed magma they mistook for oil. This somehow triggers all the other volcanos of the world (known as the “Ring of Fire”) and starts the countdown to global extinction.

Honestly, you’ll be rooting for the volcanos by the end of the movie as the cast of humans are so unlikable and ridiculously cliché that I fear for actors’ careers who played them. Michael Vartan dropped off the map since Alias, but I recently saw him in Columbiana and he was pretty good but certainly not leading man material, and Ring of Fire offers him little chance to prove otherwise. Terry O’Quinn is awesome in just about anything he’s in, but even his cinematic street cred can’t save this film or his stereotypical “evil business man who learns to put family ahead of profit” character.

The pacing is all off as the movie spends nearly 80 minutes setting up characters we don’t care about and situations that are both predictable and played out too many times to count in other similar films. We have the husband and wife who lost their son at the hands of the husband’s brother who was leading a tour through a poisonous mineshaft. Brother is finally out of jail and returns home to a family and community who spurn him until…you guessed it…he is called in to save the day when the husband (who runs the oil well) is trapped after the eruption. You have the attractive environmentalist who opposes the oil drilling operation who also happens to be the daughter of O’Quinn’s character who owns the drill. She is divorced (of course) and at odds with her husband over custody of her young son who gets stranded in an overturned bus after the eruption interrupts a class trip. And then you get Vartan’s geologist character who warnings of impending doom go unheard, and then when it all hits the fan is called in to save the day, all while dealing with a brain tumor that could rupture at any minute. Seriously? Do we need all this soap opera crap in a disaster movie? Considering there is no real disaster – at least on screen – I guess so.

We see one volcano erupt and one rolling cloud tumble through town knocking people around and overturning a bus. We see a few dozen fireballs falling from the sky, all of which seem highly targeted on Vartan’s truck. We don’t see them hitting buildings or anything else in town; just the road behind and ahead of the fleeing vehicle and once the truck overturns the barrage stops almost as if the volcano is saying, “We got’em!” Instead of showing us volcanos erupting around the world we get to watch pulsating circles on a map on a 15” laptop and a 2D cutaway view of lava rising through underground tubes like a flooding ant farm. There is absolutely NO SPECTACLE in this movie.

Ring of Fire is just a horrible movie without a single redeeming element. Do not spend money on this movie on any format. There is no way Blu-ray could make it better, even if they added subtitles, because you simply don’t care about these people or the words coming out of their mouths. Don’t rent, Red Box or even watch this on streaming digital. Your time is more valuable. The tagline for Ring of Fire is “The Unthinkable Has Arrived” and I couldn’t agree more, as I honestly can’t think of a movie worse than this.

1
765
The Walking Dead: Saints & Sinners Review – Oculus Quest
2
706
Synth Riders Celebrates Anniversary with a Month Full of Treats and an Oculus Ques...
3
704
Worm Jazz Review – PC
4
704
Take to the Skies and Choose a Side in the New Trailer for Next Generation Air Com...
5
704
CRASH BANDICOOT 4: IT’S ABOUT TIME IS AVAILABLE NOW
6
704
Join the Galaxy’s Finest as Star Wars™: Squadrons Soars Into Homes Today
7
704
The Falconeer First-Look Preview – PC
8
704
Metamorphosis is 33% Off on Steam!
9
704
Werewolf: The Apocalypse – Heart of the Forest launches on October the 13th
10
703
Frictional Games Shows Off First Gameplay Footage of Amnesia: Rebirth
All Original Content on Game Chronicles is Copyright (c) 2002-2020
Sinjin Solves Walkthroughs Copyright (c) 1996-2020 by Mark Smith