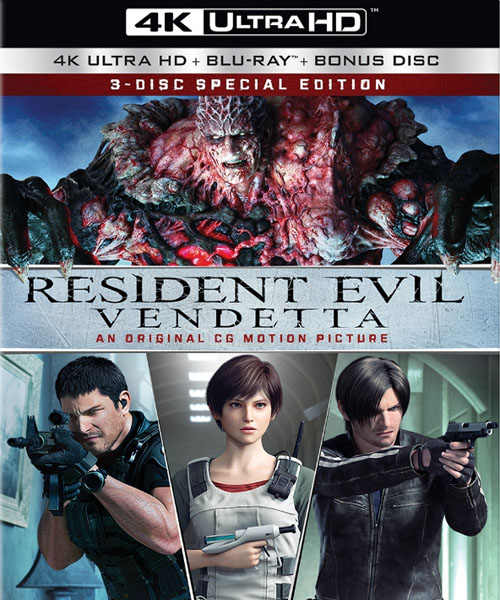 A great movie; just not a great 4K movie.

Resident Evil has the luxury of existing in three parallel universes. You have the game franchise, the live-action movie franchise, and the CG movie franchise, and while each have their own dedicated followers there has always been a certain level of disconnect between the Milla Jovovich films and the source material that inspired them. The CG films have always been more faithful to the games, both in characters and overall storytelling, so I was pretty excited when Resident Evil: Vendetta showed up for review. I was even more excited when I realized it was on 4K/UHD Blu-ray.

Vendetta is the third film in the CG series following Degeneration and Damnation, and marks a significant upgrade in production in the five-year span since the previous film. The motion capture techniques and level of CG artistry is off the charts creating a film that could easily be mistaken for live action in a casual glance, yet never enters uncanny valley territory.

Avoiding as many spoilers as possible, the plot deals with Chris Redfield who is hunting down global arms dealer, Glenn Arias, who somehow was the sole survivor when a drone dropped a bomb on his wedding.   Arias has devised a clever plan to turn all of NYC into zombies and watch the world burn, so Chris must seek the help of fan favorite, Rebecca Chambers, who has been studying the virus in her lab in Chicago. Just as she sorts out a possible cure the lab is attacked turning everyone into zombies, but Rebecca manages to reverse the effects with her new cure and joins up with Chris. 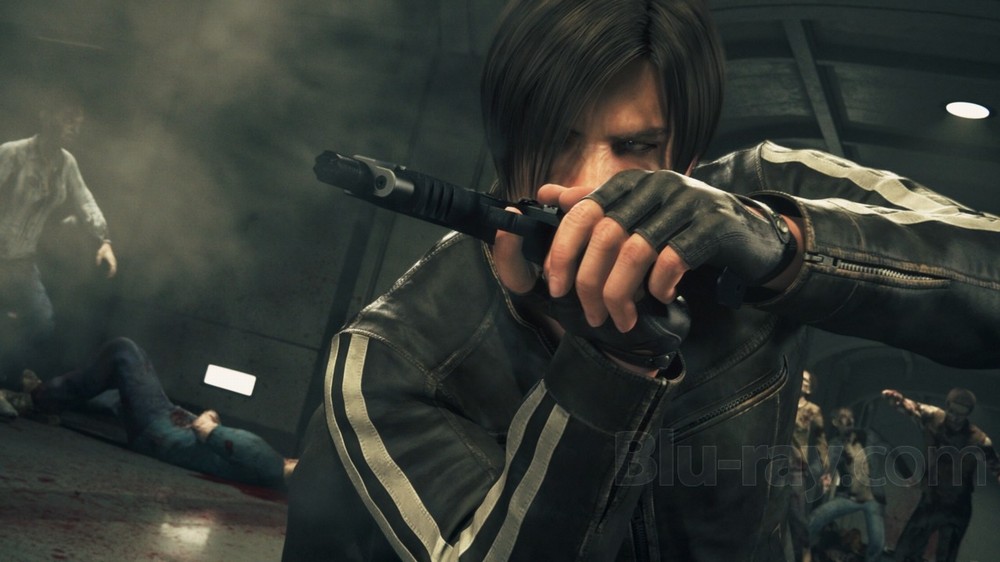 The team then heads out to recruit Leon Kennedy, but during their meeting Arias’ goons attack the lodge and kidnap Rebecca. At first Arias plans to replace his dead wife with Rebecca, but when she refuses he makes her the test subject of a new and improved virus. Meanwhile, the rest of the BSAA team heads to New York to thwart the city-wide attack, rescue Rebecca, and stop Arias once and for all in a non-stop, action-filled third act.

At only 97 minutes, the amount of action is almost overwhelming at times, but there are also a few dead zones in the film that are heavy on exposition; the first being the lodge encounter with Leon, and later the virtual wedding reception with Arias and Rebecca. Those scenes just went on a bit long for me, but otherwise the pacing was flawless.

Vendetta doesn’t rely on any mega-stars when it comes to their voice casting, which is fine for me. I don’t like to be distracted by familiar voices on animated characters, and all of the acting in this film was perfection down to the smallest part. In fact, it seems many of the actors come from more of a video game and motion-capture background.  And that is where the movie really shines.  The animation is unbelievable at times.  There are a few signature gunfights that totally evoke a John Wick vibe. 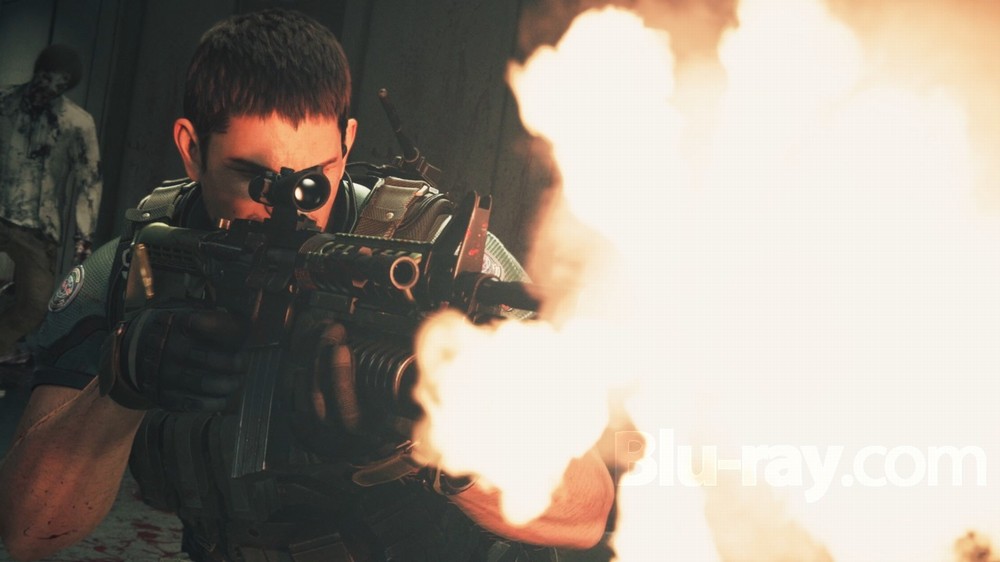 As our first official 4K Blu-ray review I was pretty excited to study every last bit of the presentation quality for Resident Evil: Vendetta, but sadly I found that this particular movie perhaps wasn’t the best choice for a 4K release. After watching the 4K version I immediate put in the standard Blu-ray and watched the entire film again and it was virtually identical. To be fair, I was using a Sony X800 4K player and a 75” Sony 940d TV, so the standard BD was getting a nice 4K upconversion anyway. I don’t have a 1080p panel so I have no way of telling how this looks on a non-4K screen, but in all of my previous comparisons of live-action and animated 4K vs. BD discs there has usually been something noticeably better about the 4K copy.

One thing I noticed is that Vendetta has that unique filtered look to it just like most every Sony CG film and their first-party PlayStation games. It’s this washed-out diffused layer that negates shininess and makes everything look like a painting rather than going for that photo-real finish. This art style also seemed to negate any effective use of HDR, so scenes where you would expect lighting to pop, like the flashlight beams in the opening scene, don’t. The only time I even noticed any level of brightness was the blinding white transition to the wedding flashback, and that entire scene was so washed out it was uncomfortably bad to look at.

To be clear, individual elements look fantastic. The characters, their clothes, and especially their facial animations are flawless and emotive. You can see the crazy detail in Chris’s combat gear and vest, and study the fibers of Rebecca’s sweater in the lab. Even the environments are loaded with stunning detail, but when viewed as a scene things fall a bit flat. The monitors in Rebecca’s lab are richly detailed but don’t seem to generate any light, somehow blending into the rest of the scene. Nothing pops and most of the movie lacks any dimension. The whole movie ends up looking like a video game cutscene from something a few years back. 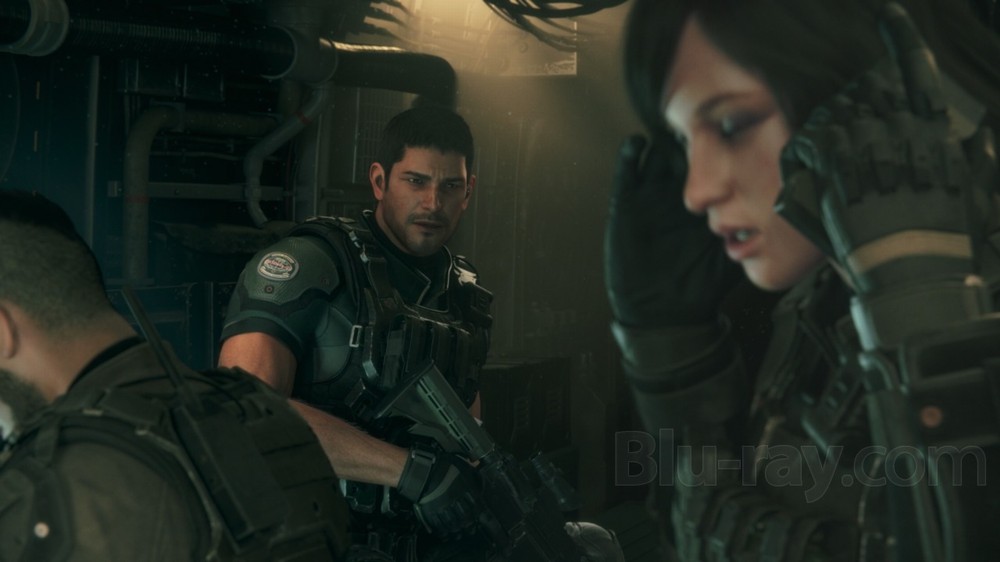 In an interesting move, Vendetta supports Dolby Vision despite very limited support of the format by Sony in the hardware department. This year’s top-end Sony TV’s support DV, but there are still no announced Sony players that do. Considering how little this particular film benefited from HDR-10 it’s a curious choice as to why they chose to make this one of their first Dolby Vision titles.

Audiophiles will certainly appreciate the truly immersive Dolby Atmos mix that did an amazing job of filling up my home theater with perfectly placed sound effects, all blended with prioritized dialogue and a thrilling powerful score. There are also 7.1 TrueHD and multiple 5.1 offerings in more languages than I’m going to list here. I was particularly impressed with the score that dynamically blended between expositional dialogue and upbeat action moments without ever distracting from the moment.

Resident Evil: Vendetta delivers an adequate amount of extras; not as many as I had hoped given the fact there is a completely separate Bonus Disc in this box set. Sadly, all of the bonus content is on the standard Blu-ray disc, so even if you just want to hear the commentary you’ll have to swap discs.  Speaking of commentary, you get a Japanese conversation with Director Takanori Tsujimoto, Executive Producer Takashi Shimizu and Writer Makoto Fukami, so prepare to read a lot of subtitles and listen to these guys laugh a lot. There are three featurettes starting with “The Creature” that goes into interesting detail on a certain boss monster, and then we get an in-depth tour of the mo-cap studio with the “Motion Capture Set Tour with Dante Carver”. The final feature, “CGI to Reality” discusses the advancements in CG technology and just how real you can make these movies look. 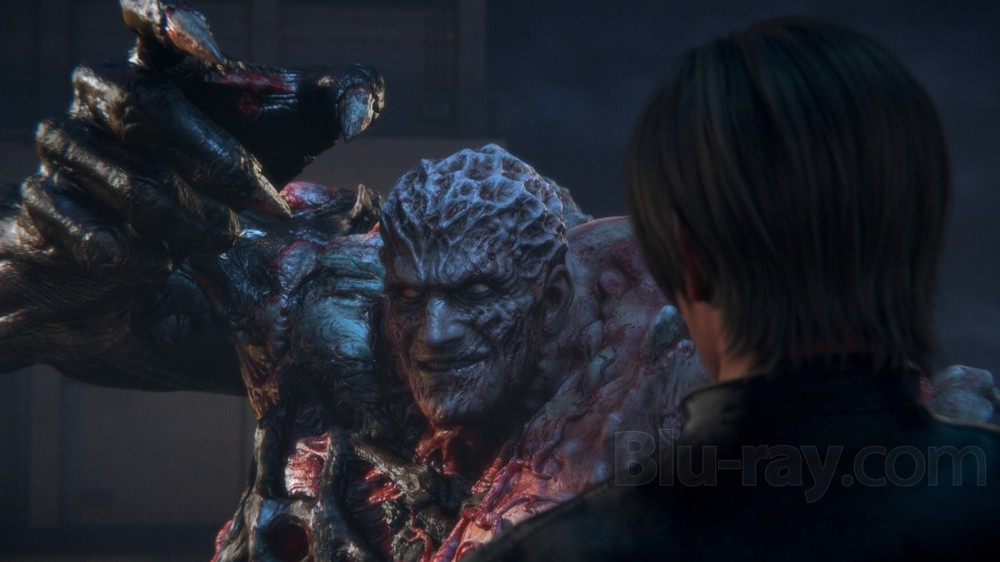 The Bonus Disc was disappointingly lacking in content. There are two 5-minute features and a 13-minute panel interview from the 2016 Tokyo Game Show. The first feature is an admittedly cool videogame-style character introduction called “BSAA Mission Briefing: Combat Arias” followed by “Designing The World of Vendetta”, which is more of a technical look at the making of the movie. I can’t believe these extras wouldn’t have fit on the standard BD disc.

Resident Evil: Vendetta is a fantastic movie in every way possible, but I honestly feel that the whole 4K, HDR, Dolby Vision treatment was a wasted opportunity. Either this style of animation doesn’t benefit from it or something got lost in the process. I watch a lot of HDR movies and play a lot of HDR games and I can tell when the lighting starts to pop and that never happened in this film. After lengthy comparisons of the 4K and the standard BD version being upconverted to 4K there is virtually no discernable difference in detail or picture quality – at least on my Sony hardware.

With only a modest amount of bonus features and no digital copy it would have been a difficult recommendation to buy this movie, but interestingly enough the 4K version seems to have the same SRP as the regular Blu-ray, although sale prices seem to differ by about $2. So yes, you do want to get Resident Evil: Vendetta, but do so because it’s a great movie and not because you are expecting some sort of mind-blowing 4K cinematic experience. 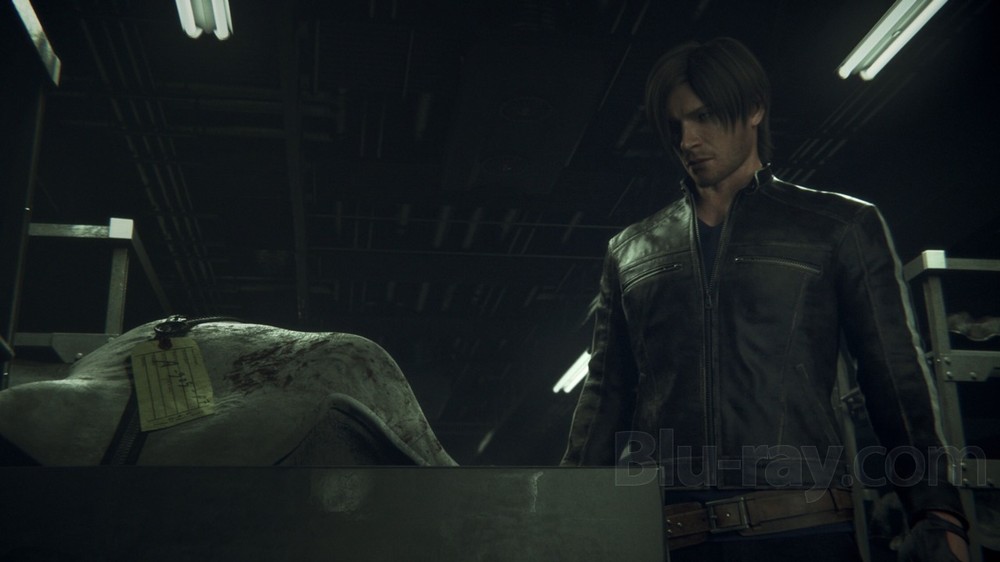 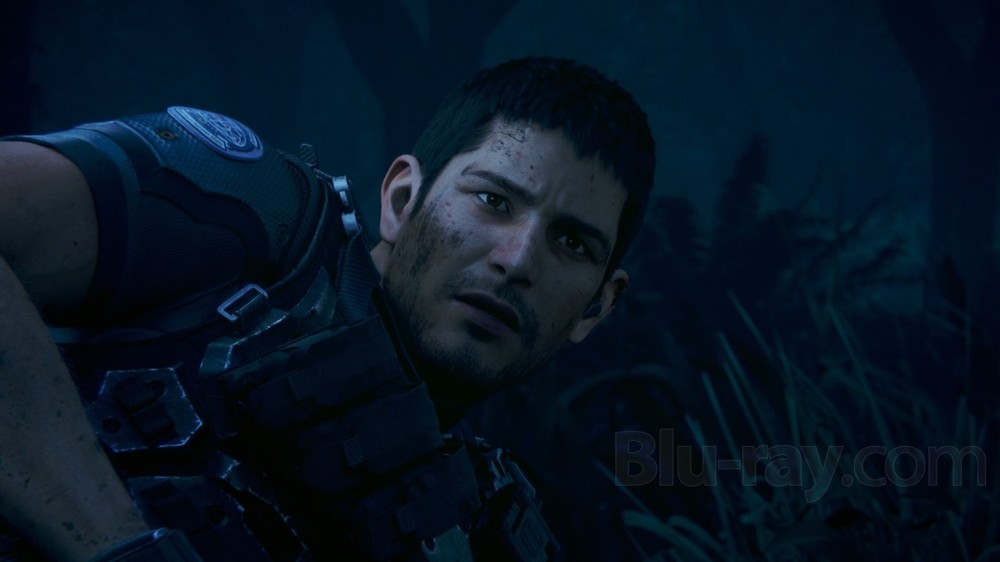 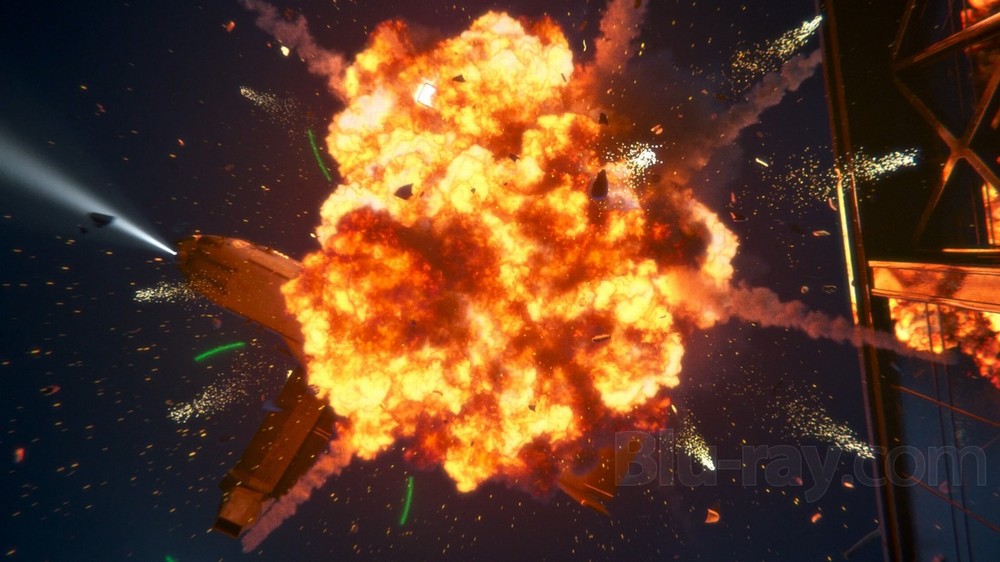