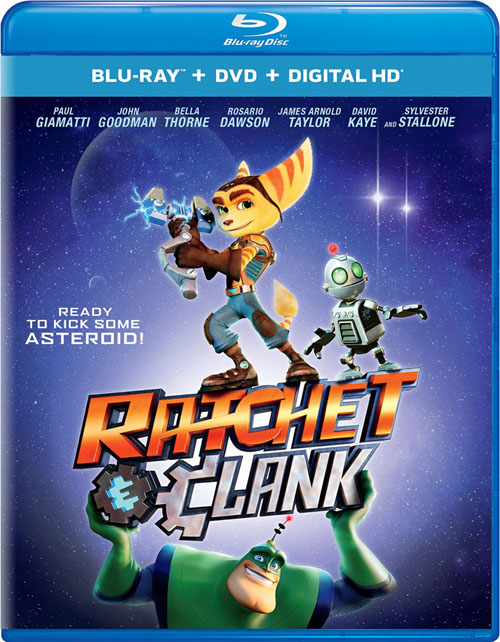 I’ve been a massive fan of the Ratchet & Clank franchise since the first time I started smashing boxes with a giant wrench back in 2002 on the PlayStation 2.  I’ve played every sequel since then; even the Secret Agent Clank spinoff on the PSP and have never been disappointed, so when news of a feature film was announced I was understandably more than excited, then equally as disappointed by the reviews once the film hit theaters; so much in fact I chose not to even go see it.

One of the biggest complaints I heard from critics (at least critics who played the game and saw the movie) was that the movie was basically just taking the cutscenes from the game and stitching them together to make a movie – something the LEGO franchise is notorious for.  But after watching the movie on its stunning new Blu-ray release that just didn’t seem to be the case; either that or I have simply forgotten the game’s cutscenes since it released this past April.  Obviously, there were some similarities – how could there not be since the game is merely an interactive version of the story being told in the film, but I found the Ratchet & Clank movie to be entirely fresh, totally charming and incredibly fun. 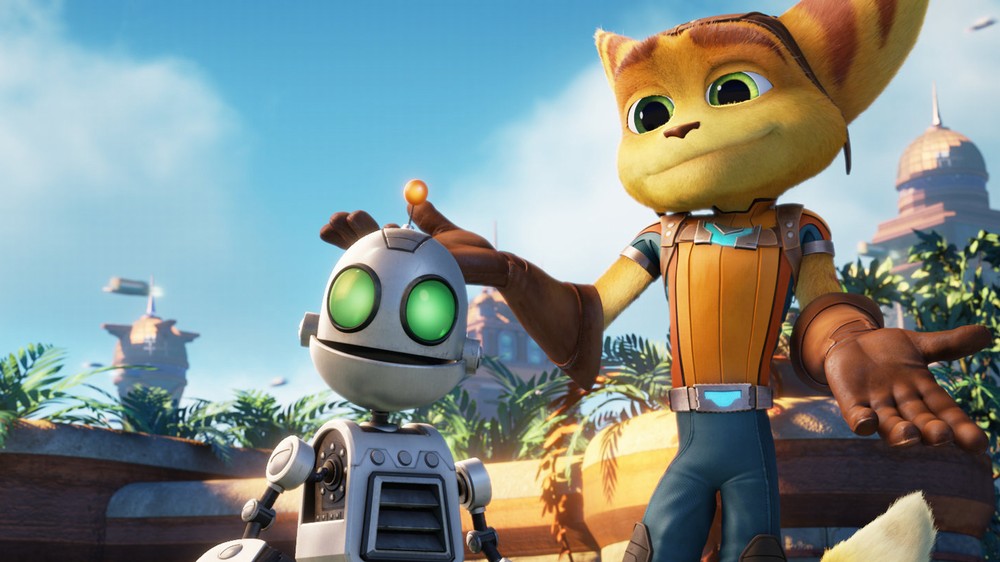 Bad guy duo Chairman Drek (voiced by Paul Giamatti) and Dr. Nefarious (voiced by Armin Shimerman), are trying to build their own planet by destroying all the others using their Deplanetizer..cough…cough…Deathstar then saving back one piece to cobble together their own planet using the best parts of all the others.  When the Galactic Rangers start to notice planets going missing they decide to bolster their numbers by adding a new ranger to the team – yes, just one, and their leader Captain Qwark (voiced Jim Ward) begins his search for someone worthy of the title.

When he’s not looking up at the sky from his own desert planet Luke…errr…I mean Ratchet (voiced by James Arnold Taylor) spends his days tinkering with ships and inventing new gadgets all the while fantasizing about being a Galactic Ranger, so when the rangers actually come to his planet on their recruiting tour he finally gets to meet his hero, Qwark, who promptly rejects his application. But Ratchet’s luck is about to change when a droid crashes on his planet. After rescuing R2D…errr…Clank (voiced by David Kaye) and learning about the nefarious (hey, I get it now!) plot to destroy the galaxy they set off to warn the rangers. After making a very heroic and public rescue of the rangers Qwark has no choice but to allow Ratchet to join his team as they prepare to battle Drek’s impressive robot army and thwart their plans of galactic destruction and domination.

The 1080p transfer for Ratchet & Clank is simply stunning. I was a bit nervous as I loaded the movie into my player as I had just watched the 4K UHD version of Angry Birds only an hour prior. I was going to do my best to avoid any unfair comparisons, but that wasn’t even necessary as the standard Blu-ray of Ratchet & Clanks upconverts flawlessly on my 75” Sony x940D to something that could easily be mistaken for 4K quality. Textures are incredible; especially the fur on Ratchet and the gleaming metal sheen of Clank with his green soulful eyes. The animation and motion is fluid; thankfully so because the movie quickly devolves into nonstop action for the final act. This is easily one of the best looking animated Blu-rays in my collection rivaling anything from Disney, and I’d really like to see this on a proper 4K UHD release.

The DTS-HD MA 5.1 lossless mix is just as impressive as the visuals. I watched about half the movie in the default mix before using my Denon to upmix the soundtrack into virtual Atmos surround for the climactic third act. Things really opened up then, but the standard mix is quite awesome with great positional audio and prioritized dialogue front and center with aggressive LFE that had my subwoofer shaking the floorboards. 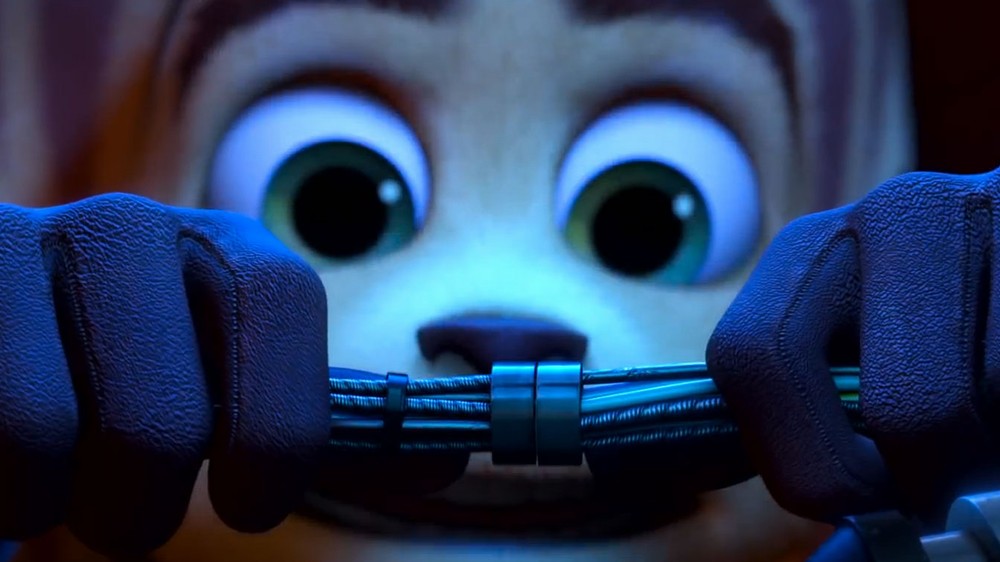 Those looking for behind-the-scenes info will likely be disappointed in the minimal offerings in this package that include a mere 12 minutes divided into two features; Ratchet & Clank: A Hero’s Journey and Ratchet & Clank: Leveling Up along with some previews for other films, a DVD copy of the movie, and a digital copy that looks incredible on an iPad.

Ratchet & Clank was a big surprise; mostly because I was going into it with so much negative bias thanks to all the incorrect reviews for the movie back when it was in theaters. While I would have loved to have seen this in 4K UHD, I somehow feel that I already have thanks to the excellent 1080p source material that upconverts flawlessly; at least on a Sony 4K TV equipped with an X1 chip. This is a film that will delight the entire family – more so the kids, but adults will smile at all the obvious pokes at Star Wars and especially the best Wilhelm scream of any movie EVER! I highly recommend, especially if you are a fan of the games. 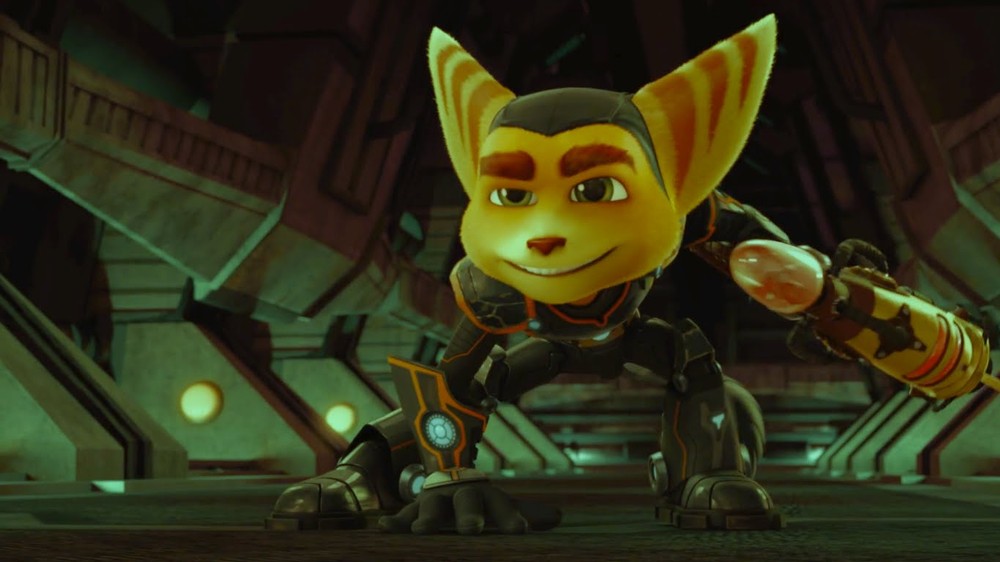