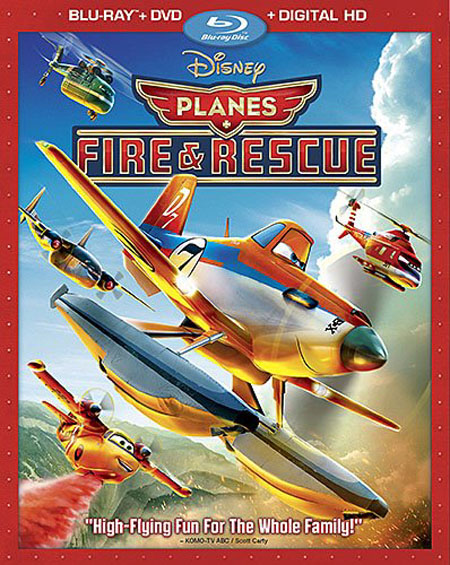 A rare sequel that exceeds the original with the perfect blend of drama, humor, and intense action that looks and sounds amazing on Blu-ray.

Minimal bonus material limits the purchase value of this release.

It was just about this time last year when we were reviewing the Planes 3D Blu-ray, and while the Cars-inspired spinoff showed a bit of promise it didn’t quite live up to the hype or expectations we normally have for these Disney animated features. When the sequel was announced I admit I was more than skeptical.  The Cars 2 sequel was a dismal failure when it came to storytelling, and that franchise had much more likeable characters than Planes, so what hope could Planes: Fire & Rescue possibly have?

To my surprise, this action-packed sequel not only surpasses the original film, it has actually made me excited for future installments. The big mistake Cars 2 made was turning it into a…ahem…vehicle for Larry the Cable Guy, to the point of excluding or severely limiting the parts of the original cast.   Fire & Rescue also leaves the original cast in the hangar, but does so to serve the story rather than a show-stealing comedian.  And what a great story it is.

The film kicks off by catching us up with the recent exploits of Dusty (Dane Cook) who has become a world renowned racer since the last film, but shortly into the show he suffers from engine damage and it looks like he may never race again. To make matters worse, during one late-night flight he crash lands setting the airport on fire, which quickly reveals that their emergency response team is old and outdated.  The airport is promptly shutdown, threatening the success of the upcoming corn festival, unless they can find a second firefighter. Unable to race, Dusty steps up and heads out west to train with a veteran team of firefighters to get certified. 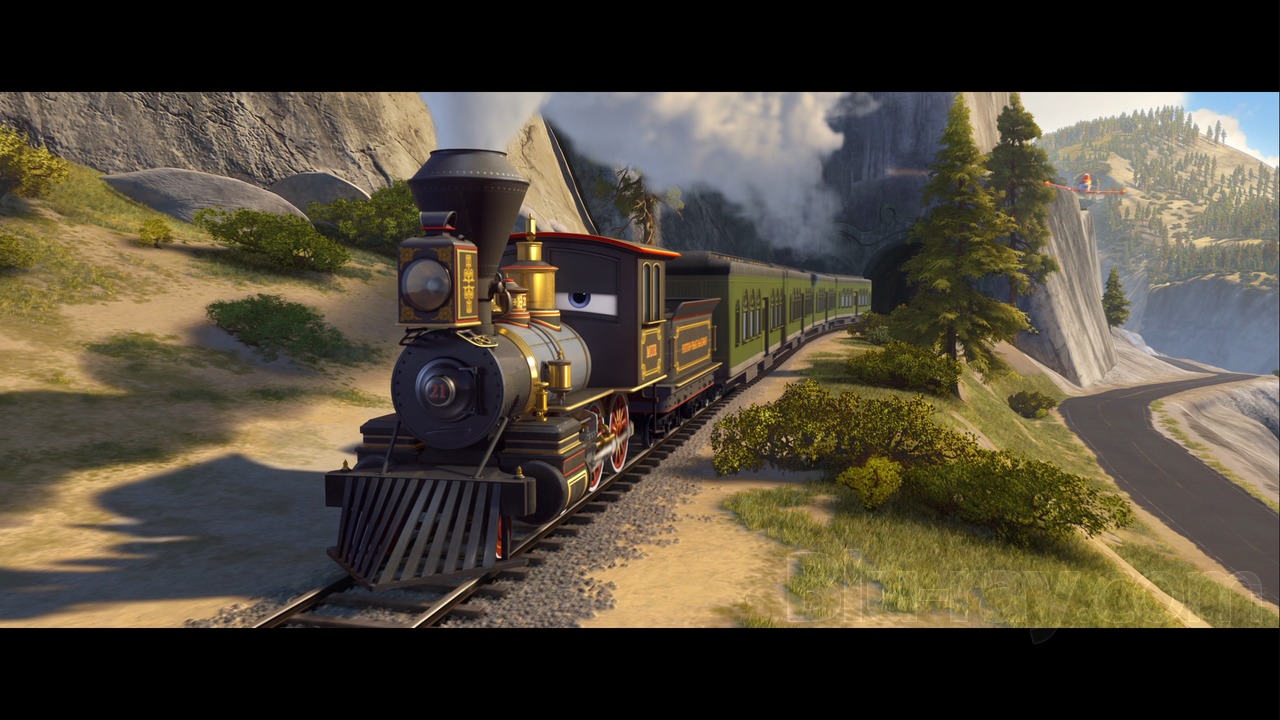 The very nature of the story demands that we don’t get that same level of interaction with the original cast, and outside of a few radio calls to update Dusty on the search for a replacement gearbox most of the film is spent with a new, and in my opinion, better cast of characters including; Blade Ranger (Ed Harris), Dipper (Julie Bowen), Cabbie (Dale Dye), and Windlifter (Wes Studi) just to name a few. Much of the second act is spent on Dusty trying to insert himself into a well-oiled team who are justifiably skeptical on Dusty’s motivations and dedication.

The pacing for Fire & Rescue is perfect, and the film rarely lets up once Dusty arrives in Piston Peak. Moments after he meets the crew an alarm sounds, and AC/DC’s Thunderstruck begins to play triggering one of the single-best moments in a Disney movie this decade.  Not only was the music selection perfect, it was all meticulously timed to some of the best firefighting action you are likely to see outside of a documentary, showcasing both the work from the air and the smokejumpers on the ground.  It’s easy to see, even before watching the included bonus feature, that Disney really did their research, not only in technique but also in all the radio chatter and technical jargon used by real firefighters.

There are a few breaks from the action that spin-off tangent stories dealing with a greedy lodge owner, an amusing one-sided romance with Dipper and Dusty, and the secret past of Blade Ranger that leads to one of the best moments in the film – a late night viewing of C.H.o.P.s with special voice cameo by Eric Estrada. As always, the content is perfectly balance for both kids and adults making this a great family viewing experience. 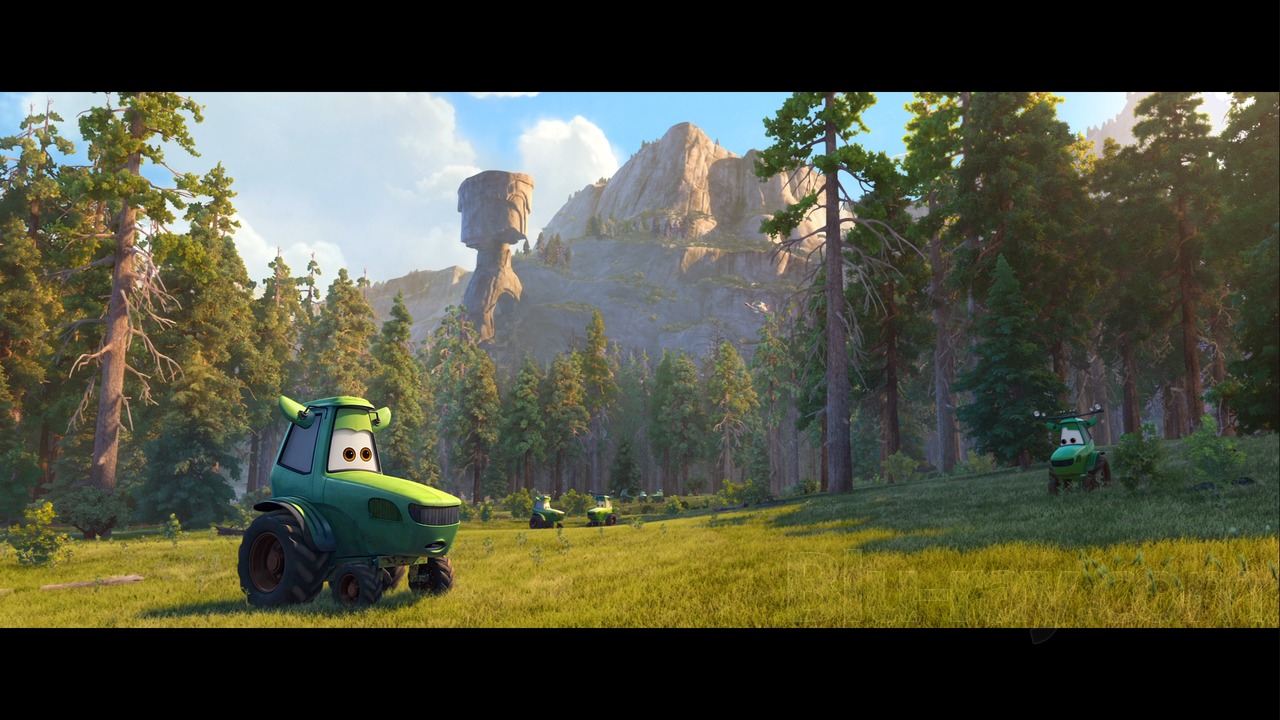 Where the first Planes took us around the world, this time we are mainly exploring the scenic vistas of Piston Peak National Park; an interesting mix of Yellowstone and Yosemite all rolled into one and then set on fire.   You will be blown away by the meticulous detail of the scenery and the incredibly realistic fire and smoke effects in this stunning 1080p/AVC presentation that showcases fantastic colors and solid black levels and virtually no aliasing, artifacting, or other noise.   The Disney animators are proven experts at turning inanimate objects into human-like personalities and the new cast of characters in Fire & Rescue is no exception. The smokejumpers all share an extreme sports-like addiction to danger while Dipper is the very embodiment of an obsessive female stalker, and Windlifter is the perfect Native American stereotype without being overly cliché or offensive, and all of these personalities come through using the most subtle of animations and eye movements.

The DTS-HD MA 7.1 track does an incredible job of putting you in the middle of the action, making great use of the side and rear channels with plenty of LFE from plane engines to roaring fires. There was never a moment in the film where I was not totally immersed in the content whether it was an intense action sequence or a quieter dramatic moment.   And once again, kudos to the music guy who chose Thunderstruck for that first dramatic firefighting sequence and the editor who timed the video to fit the song perfectly.  I’ve watched the movie three times, but I’ve watched that sequence over a dozen. 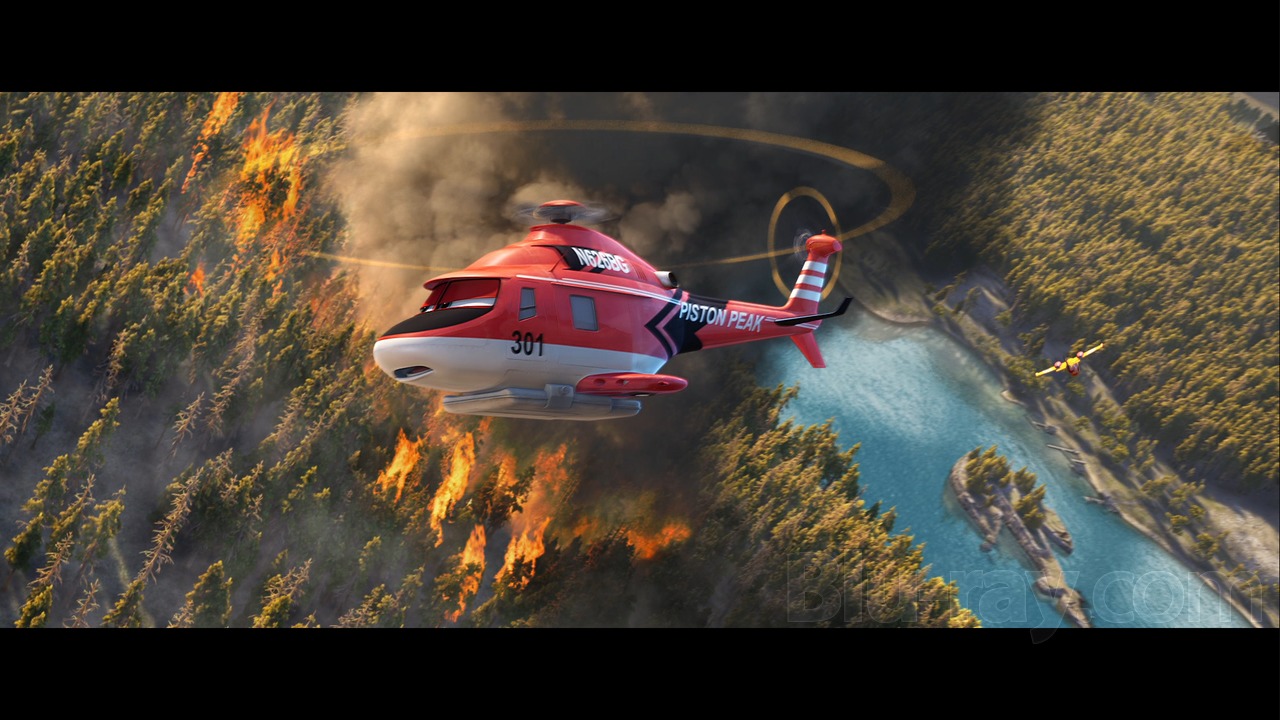 Sadly, Planes: Fire & Rescue crashes and burns when it comes to bonus content, which is pretty much the only reason to purchase a movie this days versus all of the streaming options. Vitaminamulch: Air Spectacular is a 6-minute Blu-ray exclusive short with Dusty and Chug performing in an air show, and then you have two Additional Animated Shorts totally four minutes. Air Attack: Firefighters from the Sky is a 5-minute documentary that shows the filmmakers on their research trip to learn more about the real vehicles and technique used by firefighters.  This was my favorite extra and I wish it was much longer.  Up next are three Deleted Scenes totaling four minutes of footage in various stages of production complete with introductions. Welcome to Piston Peak! is a fun tourist promo – something you might see on the TV in your hotel room showing you all the hot spots.  Wrapping up the bonus material is a one-minute CHoPs TV Promo – pretty much the same thing you see in the movie, and a two-minute Music Video, “Still I Fly” by Spencer Lee.  In total; 25 minutes of rather bland extras that you will likely never watch again.  At least they toss in a DVD and digital download copy that looks amazing on the new iPad and iPhone 6.

Planes: Fire & Rescue is a great movie; a sequel I enjoyed more than the original, and that almost never happens. It goes well beyond the scope of the original cast and abandons the racing themes almost entirely, choosing to focus on wildfires and the people who fight them.  It does so with great attention to detail and realism while simultaneously blending in that magic and Disney charm we expect from these animated features.  This Blu-ray release couldn’t look or sound any better, but with virtually no extras to speak of, it is lacking in overall value. Even so, I can’t think of a better way to entertain the entire family for 84 minutes for $20, so make sure to add this to your Disney collection when it releases tomorrow. 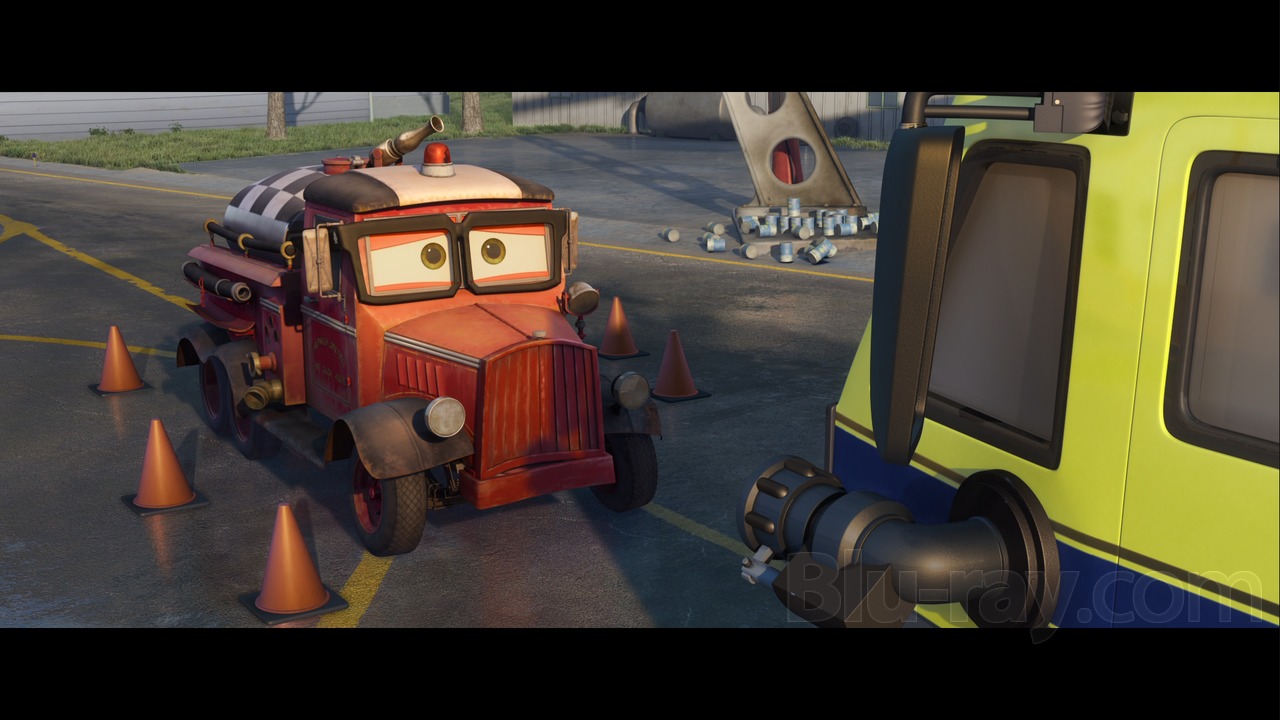 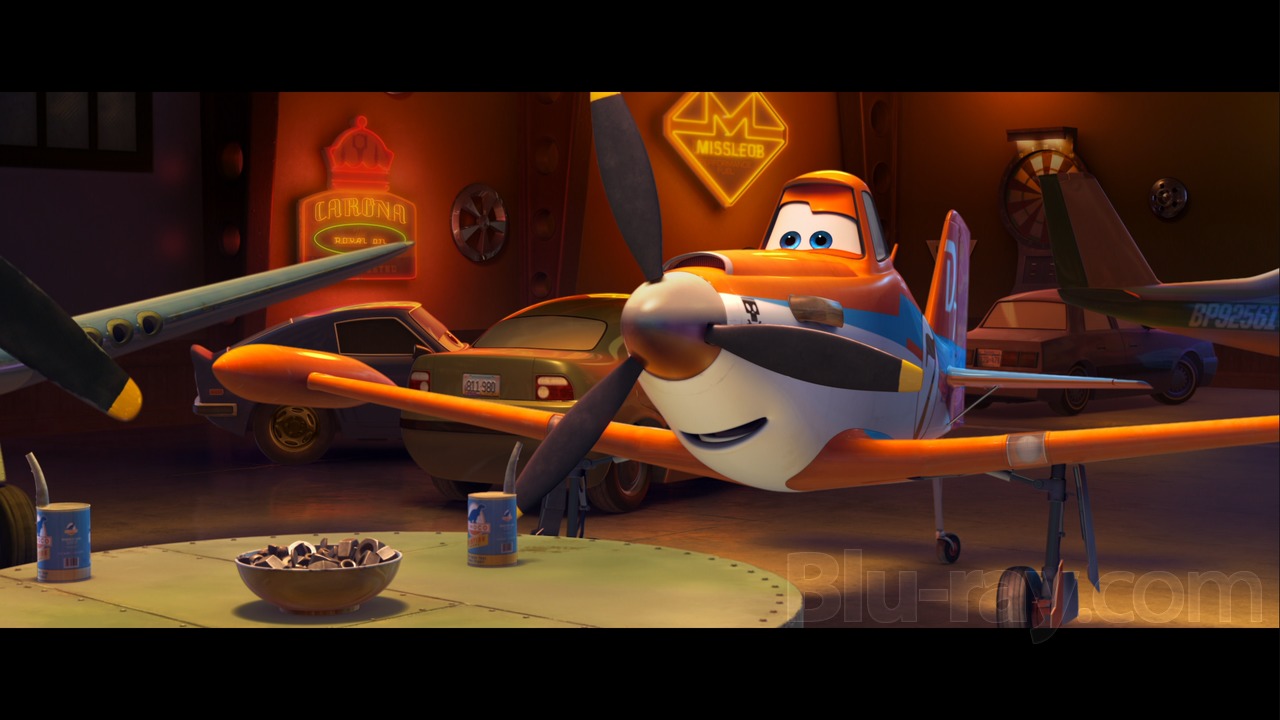 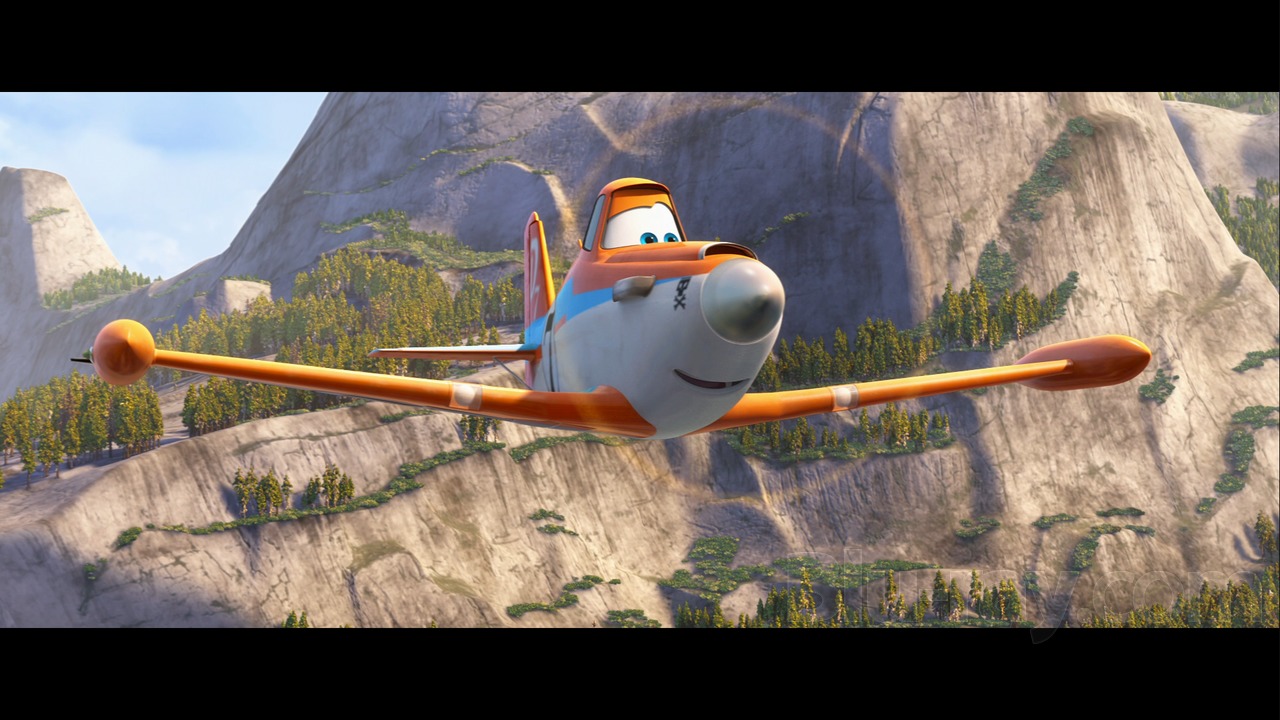 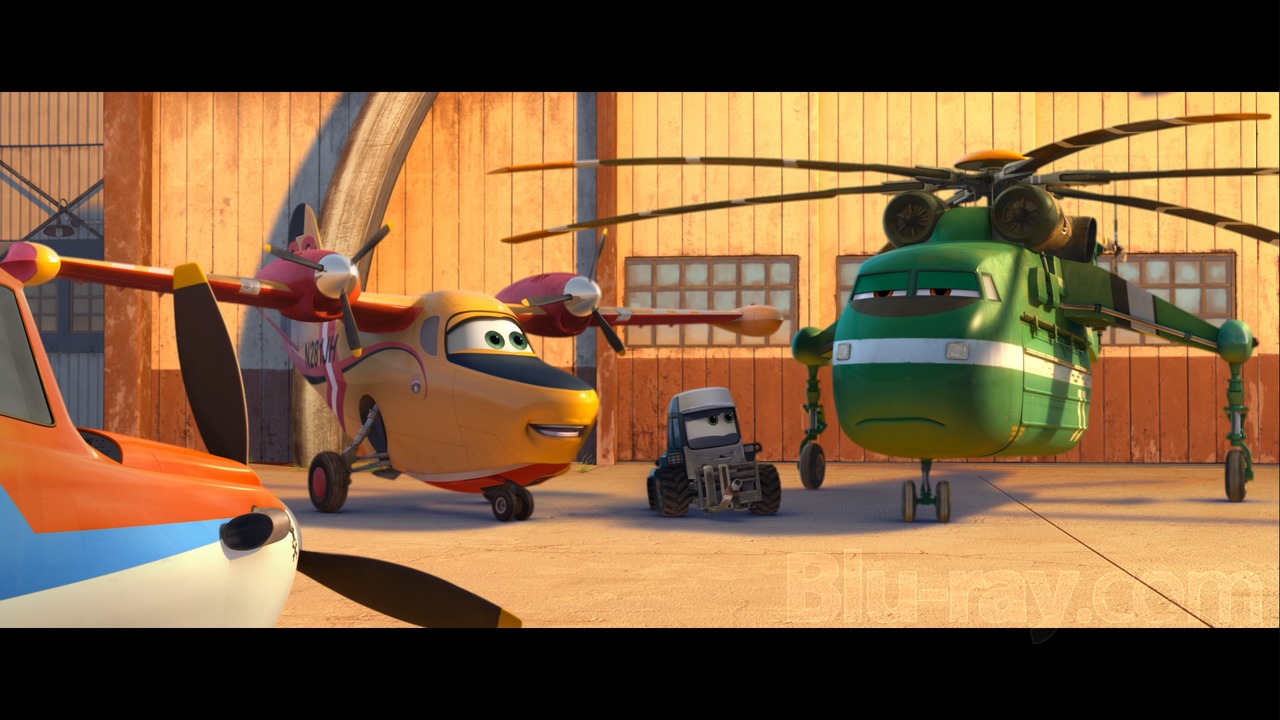 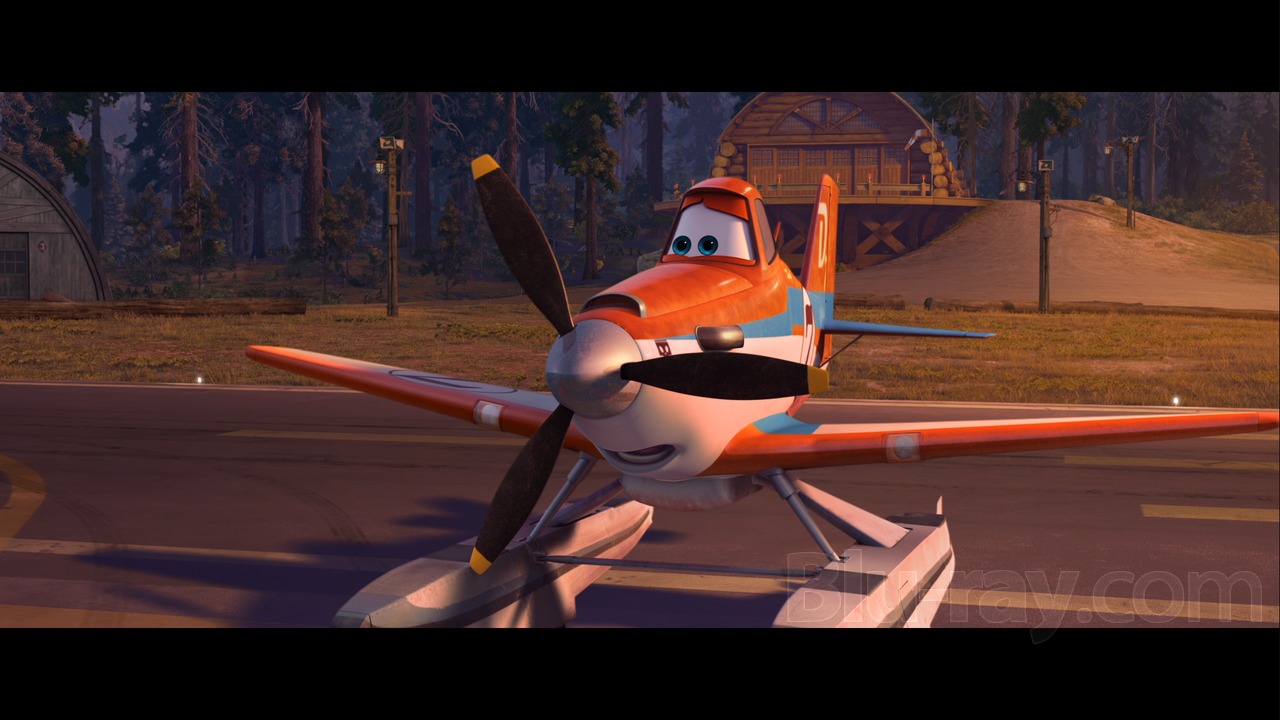 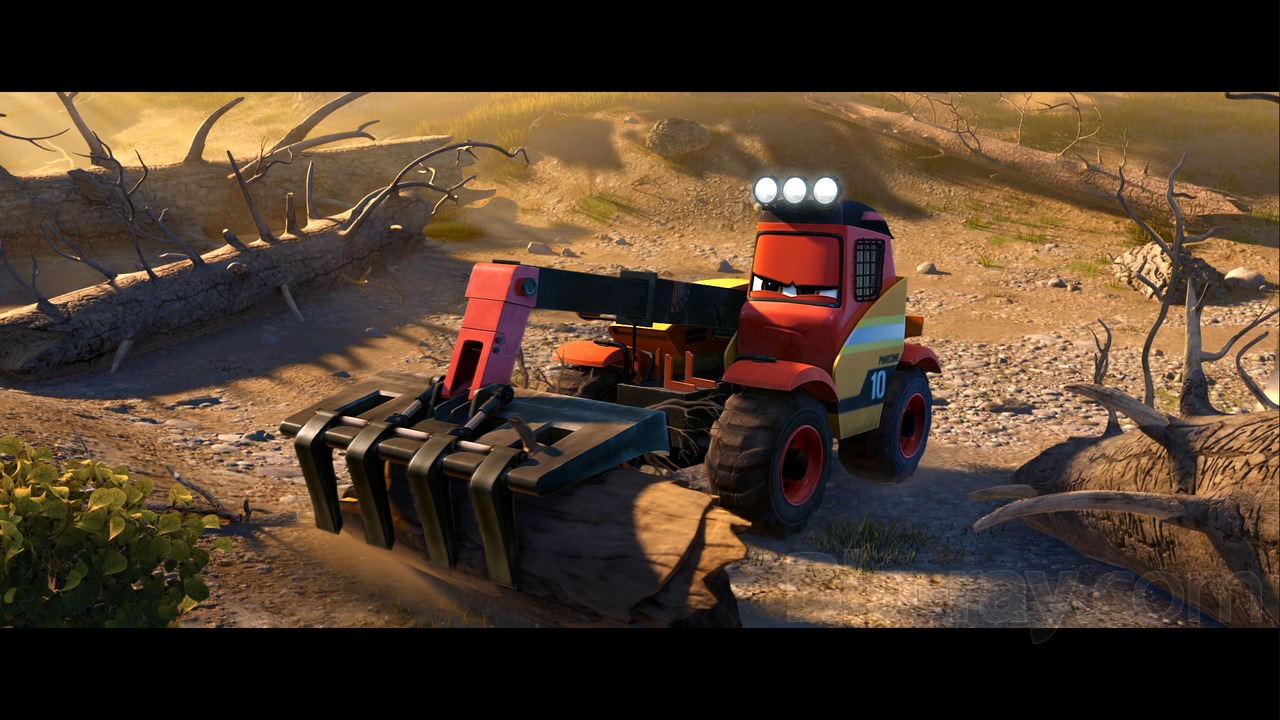 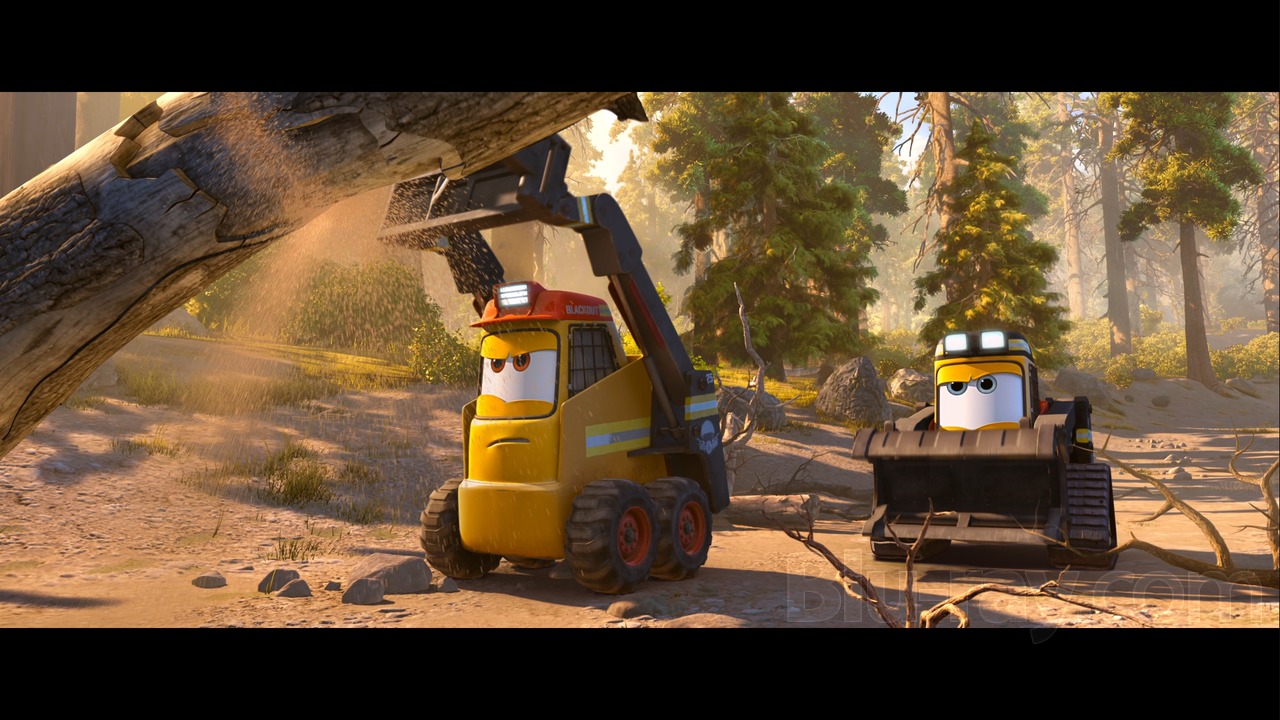 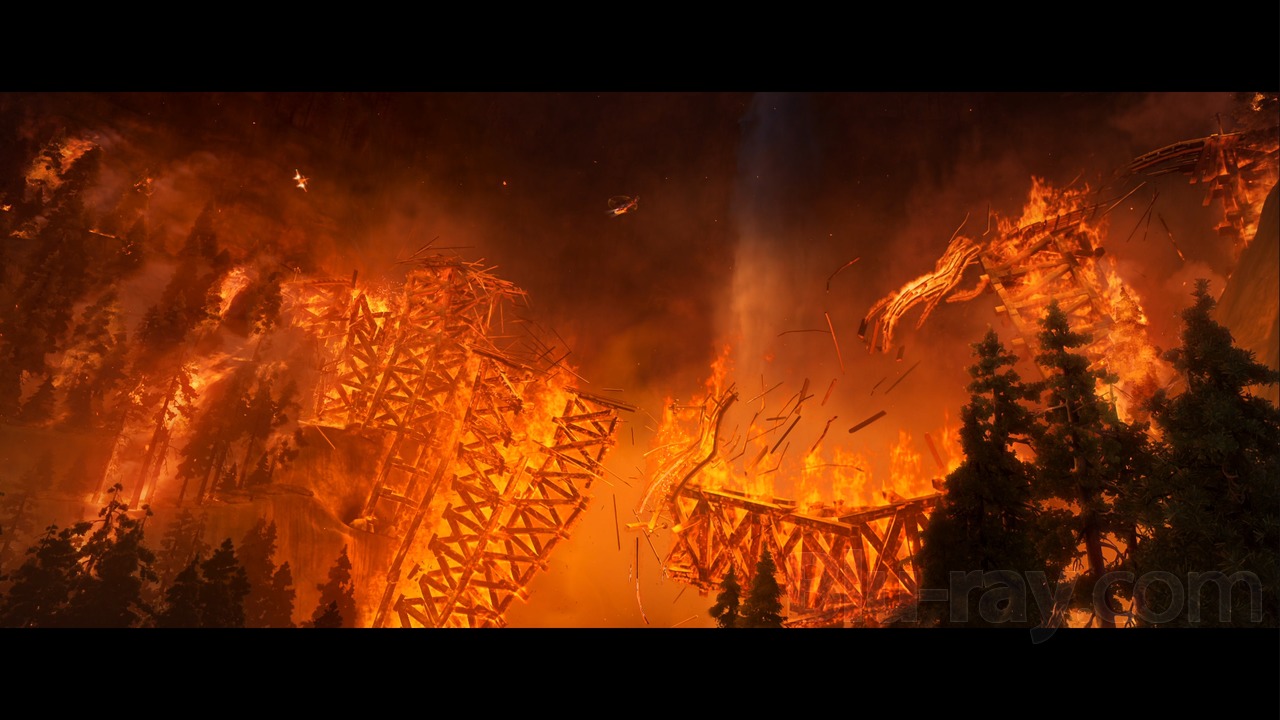 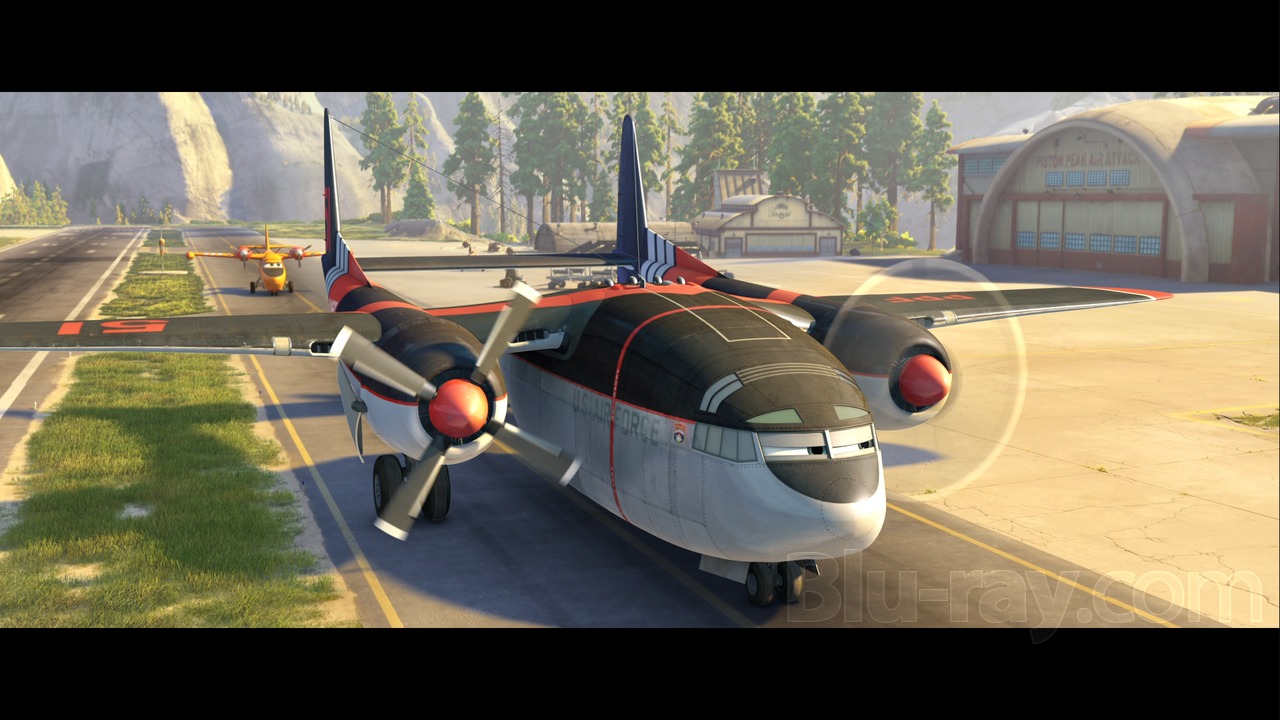 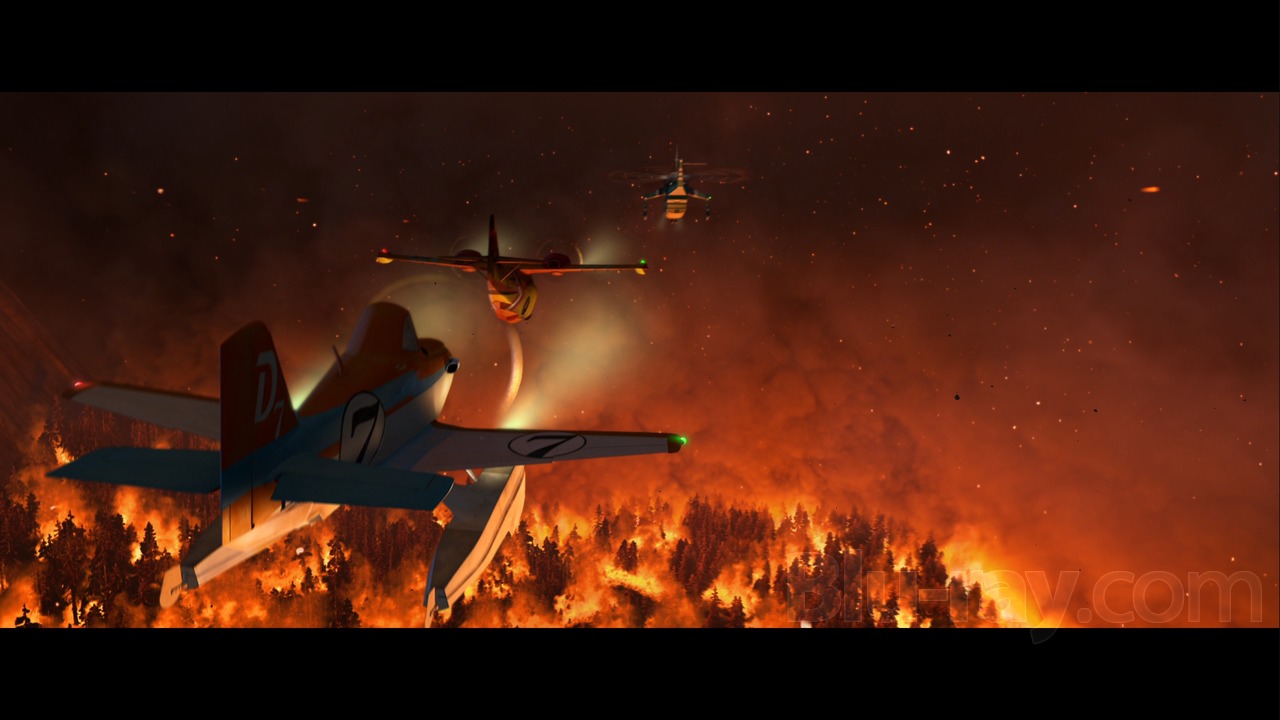 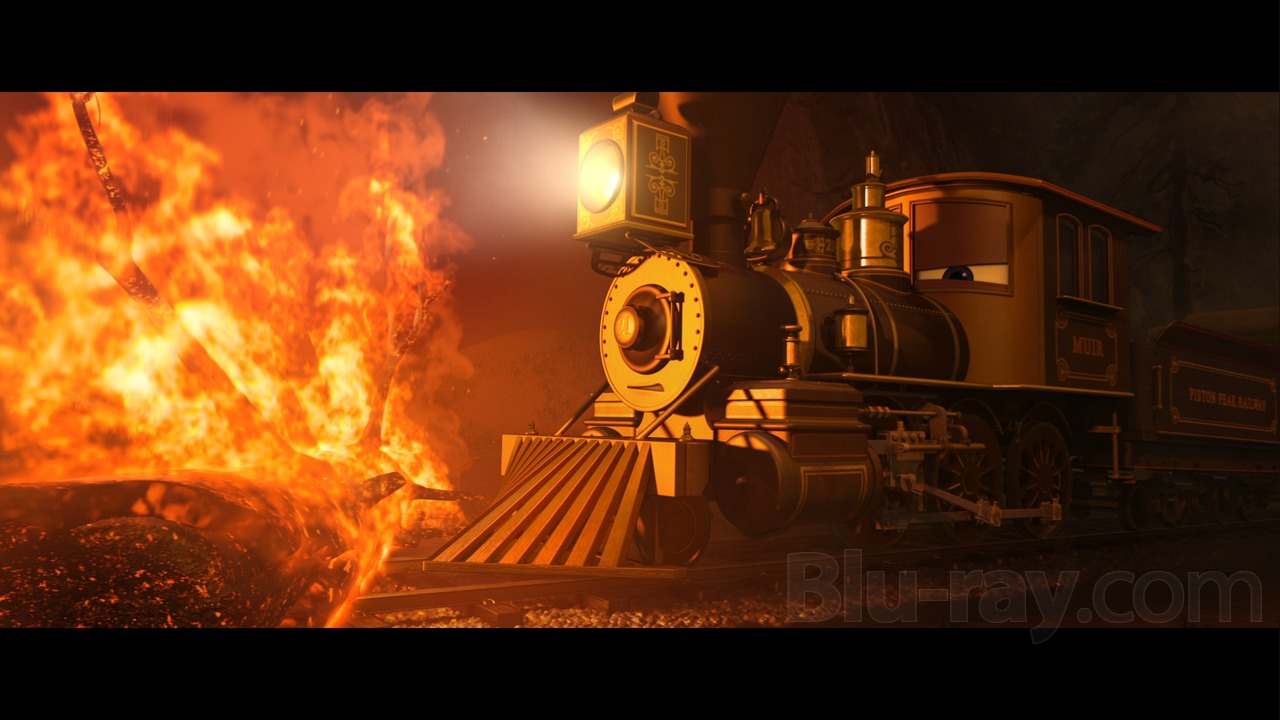 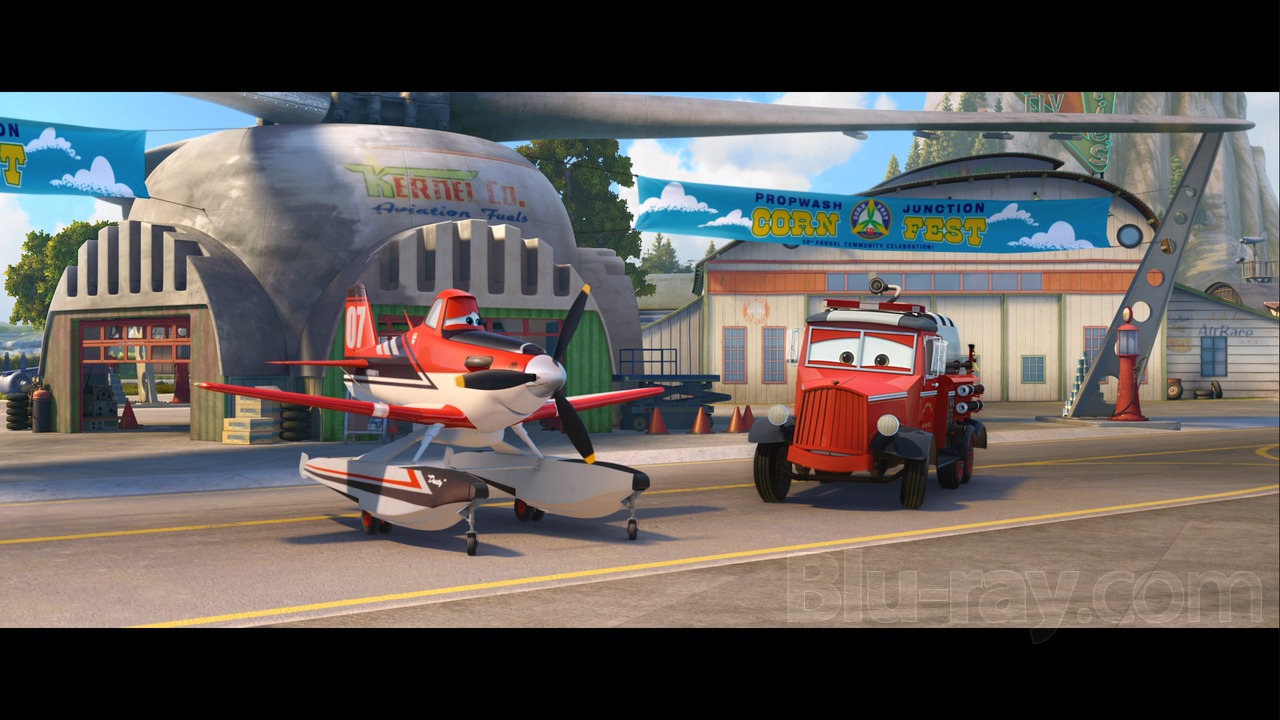