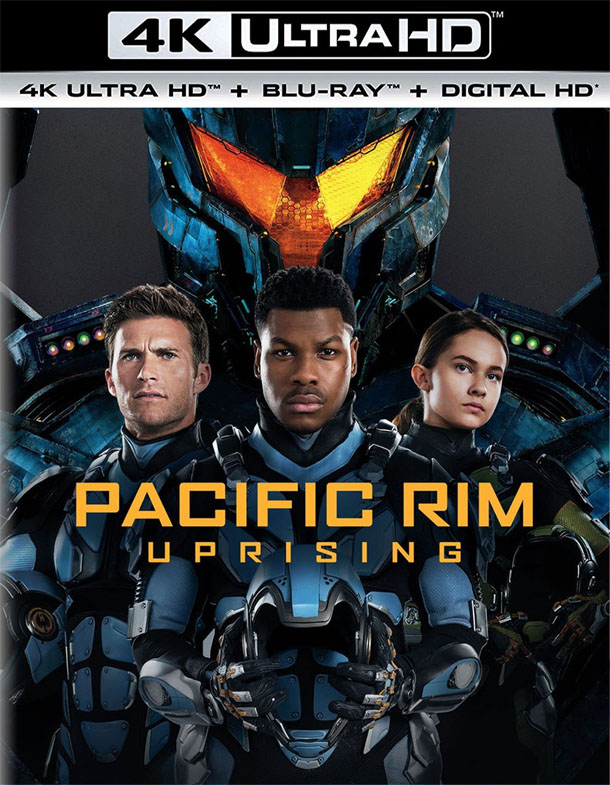 A thrilling and intelligent sequel that makes the most of the UHD format.

Pacific Rim is one of my favorite sci-fi movies of this generation and while Pacific Rim: Uprising is arguably superior in pacing, structure, and pure intensity of action, I wasn’t prepared for how much better this sequel would take advantage of the UHD format when it made its way to home release.

Guillermo del Toro took a chance turning over the sequel to rookie director, Steven S. DeKnight’s, but thanks to a fantastic script that made the most of new and existing characters and continued the timeline from the original film, Uprising feels more like an extension of the first film rather than a sequel. The opening prologue catches us up on the ten years that have transpired since the end of Pacific Rim. The world is still rebuilding as is the Jaeger program, who now recruits drift-proficient teens to their ranks. Jake Pentecost (John Boyega) plays the son of the hero from the first film, but has lost his way since dropping out of the program. He now scavenges illegal Jaeger tech to fund his lavish lifestyle. On one such mission he meets up with Amara Namani (Cailee Spaeny), a young female mechanical protégé who has built her own Jaeger from spare parts, but when they are both apprehended by the “police” they are sent to the Jaeger training camp where Amara begins her pilot training and Jake teams up with Nate Lambert (Scott Eastwood) to mold these youngsters into tomorrows pilots.

Despite not seeing a Kaiju until the third act of the film, Uprising is surprisingly engaging, with a great momentum and pace throughout. Even when giant robots aren’t fighting giant monsters the story is captivating with plenty of intrigue and betrayal, and not all of it is telegraphed to the audience so first-time viewers get several surprises. One of the very first battles is robot-vs-robot and proves to be one of the better fights in the movie. And when the Kaiju finally do appear, nothing can prepare you for the epic level of destruction leading to the grand finale on Mount Fuji.

I have to admit I was disappointed to learn that Uprising, while shot at various resolutions ranging from 2.8K to 3.4K, was ultimately finished at 2K, which sadly is still the de facto standard resolution for special effects studios to render their effects at a timely and costly method. All too often these 2160p releases seldom see much, if any, noticeable improvement over their Blu-ray counterpart, especially when viewed on a quality 4K HDTV with a capable up-conversion processor. I am happy to report that in direct comparison viewing with the BD and UHD copies that the UHD version is a far superior to the standard BD, boasting better clarity, texture detail, and thanks to some impressive support of 12-bit Dolby Vision and HDR-10 the lighting and color saturation is off the charts. This boost in lighting gives greater clarity to the interior scenes while maintaining perfect visuals when things get blown out in the snowy white exteriors of the final battle. While there was no 3D version included in this package, some of the Jaeger HUDS looked like they were popping off the screen.

Matching the visuals in superior quality is an impressive Dolby Atmos mix that had my sub shaking the house while making the most of all the surround channels including the overhead speakers in a few specific scenes. There is so much positional audio happening in this movie you be instinctively ducking for cover in numerous battle sequences, but even more impressive amongst all this audio shock and awe was the perfectly balanced dialogue track that was always front and center and never suppressed by the powerful effects or emotionally engaging soundtrack.

Pacific Rim: Uprising is my 98th UHD movie, and while I have several other UHD movies that are on the BD-100 format none of them have included the extras on the actual 4K disc until now. Not only is all the bonus material featured on the 4K disc as well as the commentary track, all of the featurettes are presented in 4K resolution. Big bonus points for this, and now that we know it can be done I expect no less from every other 4K Blu-ray moving forward. There is nothing more annoying than having to swap discs to watch bonus features or watch a movie in 1080p just to listen to the commentary track.

First up is a fantastic feature commentary with director, Steven S. DeKnight who offers up an entertaining and educational exploration of the film while you watch. Much of his material is also covered in the individual featurettes, so there is a bit of redundancy if you binge all the bonuses in a single sitting. That long list of extras includes nearly seven minutes of Deleted Scenes with optional director commentary. The Hall of Heroes is a cool museum style kiosk of info narrated by John Boyega who talks about the hero Jaegers in the film. Bridge to Uprising talks about the thematic elements that gave birth to this sequel, while The Underworld of Uprising explores the beginning of the film and the origins of the new characters.

Becoming Cadets explores the colorful secondary cast of pilot trainees while Unexpected Villain explores and spoils the surprise traitor in the story. Next Level Jaegers discusses the new Jaeger designs and how they were meant to show a decade of advanced technology as well as how they integrate into the environments. I Am Scrapper highlights the delightful new robot created by Amara. Going Mega explores the new Kaiju designs and abilities and we wrap up with two character pieces, Secrets of Shao and Mako Returns, that go into depth on a new and a returning character.

I saw Pacific Rim: Uprising in the theater and the first thing I said walking into the lobby when it was over was, “I can’t wait for this to come to 4K”, and now that it has I couldn’t be more pleased. I was already in love with the story and characters, and with this reference level of technical expertise at work for this UHD release I’ll be using Uprising to show off the advantages of 4K tech for a long time to come. Universal Pictures knocks this release out of the park with a superior AV package and loads of 4K extras actually on the 4K disc, making this a must own addition to anyone’s 4K library.