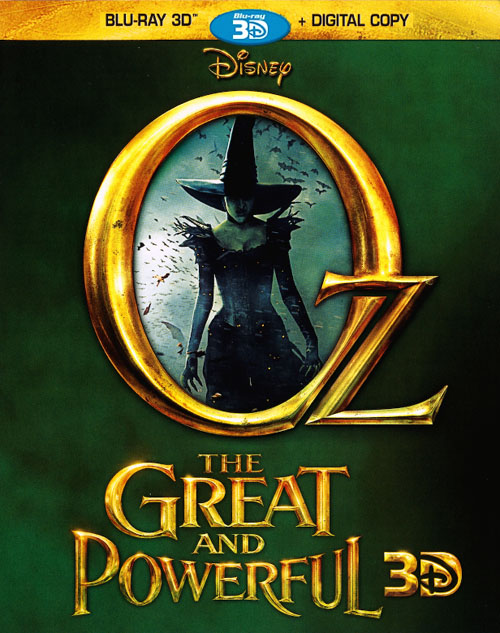 Extras only available via digital download
No 2D copy included

Standalone 3D release is shameless attempt to drain your wallet.

When it comes to expanding upon the Wizard of Oz universe I’m much more in favor of a complete reimagining like Tin Man rather than a hypothetical prequel dealing with the origin story of the aforementioned “wizard”; especially when said wizard is played by James Franco. It’s not that I don’t like Franco but on any given day I would rather see him cutting off his own arm with a pocket knife than traipsing around an enchanted CG wonderland.

Oz the Great and Powerful is without a doubt a splenderific masterpiece of technological achievement when it comes to CG effects and the skill of all those computer jockeys assembling this movie pixel by pixel, but no matter how good the movie looks it definitely lacks the substance and heart of Dorothy’s tale…and her little dog too. There is a story here but it never really grabs you, let alone tries to carry you through the scenery, so Oz ends up being a very pretty tech demo for your HDTV and sound system.

Franco plays Oscar “Oz” Diggs, a magician struggling to make his way in a black and white Kansas back in 1905, until he is whisked away to the magical (and quite colorful) land of Oz. It is there he meets all sorts of random characters including Theodora (Mila Kunis) who confuses Oscar’s parlor tricks with real magic and assumes he is the wizard prophesized to free the land from the evil reign of the Wicked Witch. He embarks on a quest to kill the witch, venturing into the Dark Forest where he meets up with Glinda (Michelle Williams) the good witch, China Girl (Joey King), and Finley (Zach Braff), one of those flying monkeys. Then its off to Emerald City to add more characters to the mix all leading up to the rather anti-climactic finale.

There are plenty of sound ingredients to work with here, but the recipe is just all wrong. The pacing of the film is all off with a very slow start that slowly ramps up to something mildly entertaining by the third act, and while the characters all have great potential on the page, nearly all of them were miscast including the director. I’m not sure why Sam Rami even considered this project – it is so outside of his wheelhouse. Franco lacks the gravitas to properly play his part and Kunis is ill-prepared to carry her character much further than the second act.

Oz the Great and Powerful is available in both 2D and 3D but not in the same package. I’m not here to review marketing strategies but honestly, this is bad form and smacks of corporate greed. If you buy the 3D version of the film you are forced to watch it in 3D unless you settle for the 2D digital copy or purchase the “missing” 2D disc separately for $6 using your Disney Reward code. Conversely, you can also buy the 2D version of the Blu-ray and purchase the 3D disc separately.

For as much as I hate this particular direction in marketing that directly affects consumer choice and convenience I have to admit that Oz the Great and Powerful is perhaps the finest 3D movie you can experience in your home to date. The level of realistic depth on all but the widest of shots is unmatched. There are no ghosting or aliasing issues to speak of, and with the exception of some noise in the darker scenes (the same problem found on the 2D version), this is quite close to visual perfection in all three dimensions. So sadly, Disney’s first must-have 3D movie is also one of the hardest ones for cost-conscious viewers to purchase.

Oz the Great and Powerful delivers a fantastic feast for the ears with a magical DTS-HD MA 7.1 mix that will put your home theater to the test. Dialogue is properly prioritized to the front, and the mixing levels for sound effects and the enchanting score are equally as perfect. My subwoofer trembled with frequent LFE and my rear channels were put to expert use to turn my living room into an extension of Oz. This is definitely tech-demo material.

If you thought you were getting hustled with the missing 2D Blu-ray (and standard DVD) discs just wait until you realize that none of the bonus materials are included on the 3D only version. Instead, you’ll need to go setup a new Digital Copy Plus account and download/stream all of your bonus content over the Internet, and even then you still won’t have access to the Disney Second Screen Experience. For a version that is priced $3-5 more than its 2D counterpart, you are getting a whole lot less for your dollar. If you want to see the extras you’ll be missing out on check out our review for the 2D version of Oz the Great and Powerful.

Even from the very first trailer, Oz the Great and Powerful just never grabbed me. I never bothered to see it in the theater and I probably wouldn’t have even watched at home if I wasn’t reviewing it. I appreciated the spectacle of it all but the story and this particular cast just didn’t work for me. The prequel lacks focus and imagination, failing to capture the hearts and minds of adults or kids. While Disney’s Blu-ray release is a technical marvel in both visuals and sound, if I want to spend a few hours in Oz you’re better off watching the original movie or even the Tin Man reimagining.