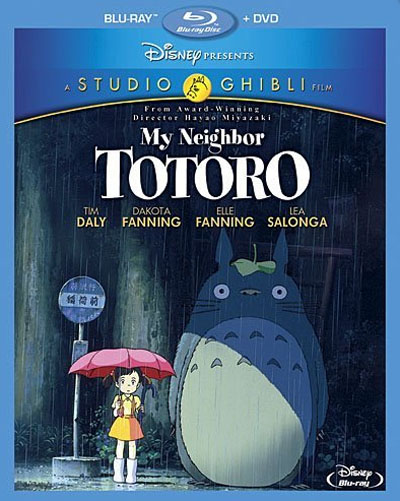 My Neighbor Totoro is a classic animated film full of imagination, heart and wonder.

It’s no secret that I love Miyazaki films as I’ve actually reviewed several of them here at GCM. A few years ago I reviewed My Neighbor Totoro on DVD and couldn’t help but wonder afterwards what it would look like on Blu-Ray after watching Ponyo. Someone must have had the same though as a copy of the My Neighbor Totoro Blu-Ray Combo Pack landed on my desk this week.

In My Neighbor Totoro, we meet the Kusakabe family as the move into a house in rural Japan to be closer to their ailing mother in a nearby hospital in 1958. A university professor and his two daughters Satsuki and Mei settle into a house that is uninhabited and full of black beings called soot sprites as the two sisters find out. These curious little creatures pave the way for the film’s title creature as well as a cat-bus monster which are as iconic to the world of anime as they are to Miyazaki’s works.

This film while light hearted has its sad and dark moments. The main underlying reason that I think was the fact that the girl’s mother has been stuck in the hospital with some unnamed (though probably tuberculosis hinted to by Miyazaki) long-term disease. At first the girl’s seem like they are handling it well but as the movie progresses you find that they are not, especially the oldest, Satsuki. The thought of losing their mother is strong enough to cause Mei to run off alone to go to her mother which brings about the film’s more emotional ending. 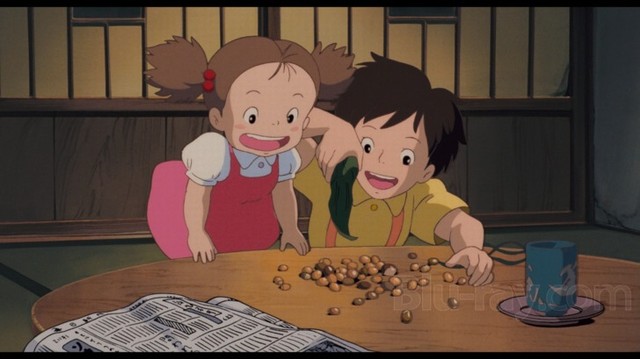 My Neighbor Totoro like many a Miyazaki film has its truly memorable characters. Totoro, which has now become the logo character for Studio Ghibli, is a strange yet magical creature that holds a few a few tricks up his…fur. There is a scene in the film involving two smaller Totoro and the younger sister Mei that is cute and predictable and adds to the level of innocence that is the key aspect of My Neighbor Totoro. Of all the creatures or characters in the film my favorite is the cat-bus monster. This creature while only seen briefly in the film at first reminded me heavily of the Cheshire Cat, which could disappear just like him grin and all. I also loved the interactions between Satsuki and Kanta, the local boy, as it’s obvious that he likes her yet still acts like a young gentleman while helping her out throughout the film.

My Neighbor Totoro is Hayao Miyazaki’s first film set in Japan so this film is a bit different than his first two films. Drawing inspiration from his own surroundings Miyazaki designed this film as if it was being seen from the eyes of a child. This is evident in the way that Satsuki and Mei interact while exploring their new home for the first time and when Mei is playing out in the yard early on in the film. One of the reasons that I like My Neighbor Totoro is that like most Miyazaki there is always some sort of message. In this film his usual topics about respecting nature is present as well as being respectful to others.

Miyazaki’s works are easily distinguishable from other animation directors and it shows time after time. The character designs are all well done and the environments are beautifully animated. This particular film has more of a carefree feel to it. The calm scenes of rice paddies and forests and high paced travel scenes are presented in 1.85:1 Widescreen and look good. I have to say that while the movie did look good on DVD the Blu-Ray looks a lot better thanks to a new HD digital transfer. Miyazaki’s mix of watercolor backdrops and classic hand-drawn animation and coloring really pop off the screen in this new treatment without making the film looked aged like the DVD release I did a while back. 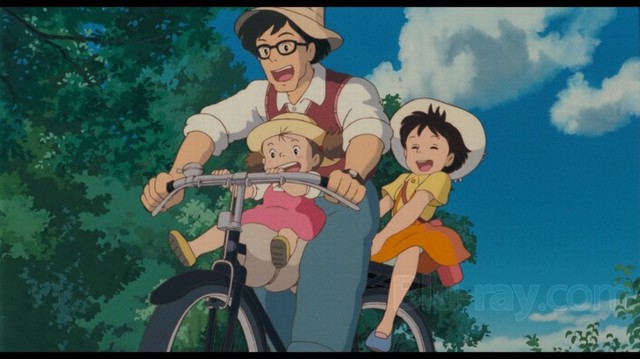 My Neighbor Totoro features both an awesome score as well as a good voice cast presented in English Dolby Digital Sound. The score which is light and carefree at times as well as mystically upbeat at times is done by Joe Hisaishi. He has done remarkable work over the many years for Miyazaki and this film is no different. You can watch this film with either the English or Japanese audio tracks but I preferred watching this film in English. My Neighbor Totoro features some a rather surprising English voice cast members including sisters Dakota and Elle Fanning. One name that doesn’t surprise me however is Frank Welker who is the voice of both the cat-bus and Totoro. Frank Welker is synonymous with doing voice work in animation such as Scooby Doo.

The My Neighbor Totoro Blu-Ray Combo Pack contains numerous special features including a look into how the film came to be, his inspiration for the story and the real life locations that came to be what you see in the film. This is same content found on the 2-Disc DVD release a few years back but is still interesting enough to watch as it gives you a brief insight into Japanese living both now and back then during the film’s time era. The My Neighbor Totoro Blu-Ray Combo Pack also features the standard DVD version of the film, per the Disney norm, so you can get your Miyazaki fix on the go should the need arise.

My Neighbor Totoro is a classic animated film full of imagination, heart and wonder. Hayao Miyazaki is a master at making films that touch your heart and expand your mind with memorable characters and vivid worlds. I really enjoyed watching My Neighbor Totoro and plan on watching it many times over in the years to come. If you missed out on the 2-Disc version then now is the time to jump on the sweet HD transfer of the My Neighbor Totoro Blu-Ray Combo Pack that releases this week simultaneously alongside with the Howl’s Moving Castle Blu-Ray Combo Pack, which you should also pick up. 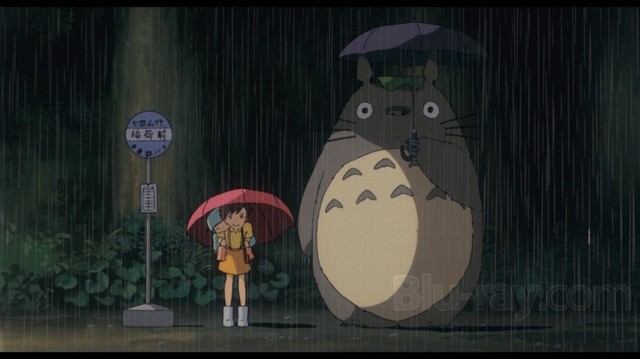 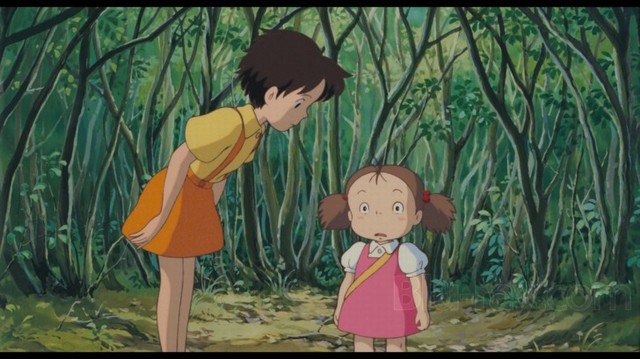 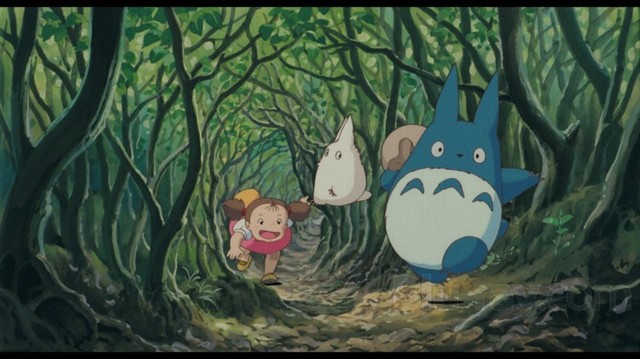 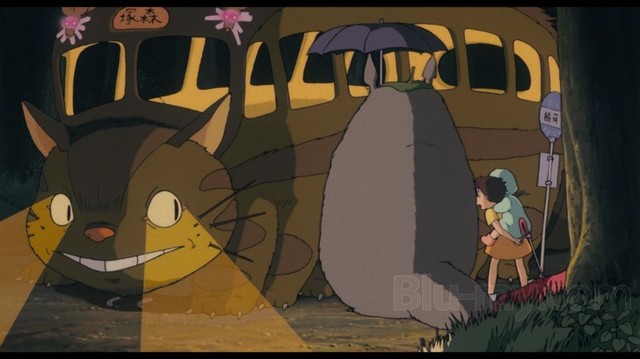 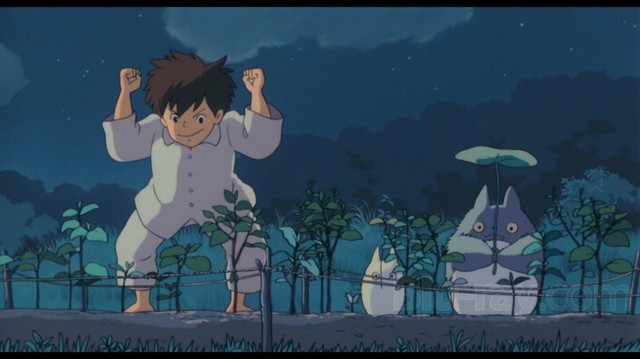 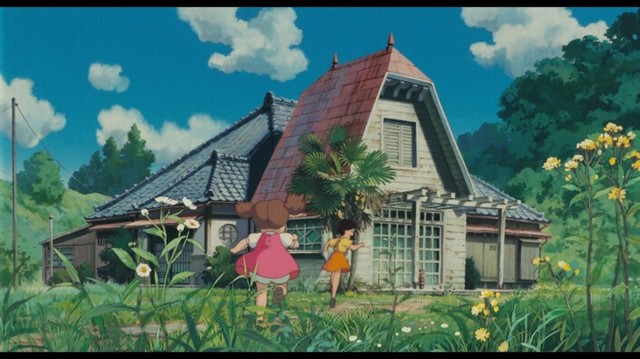 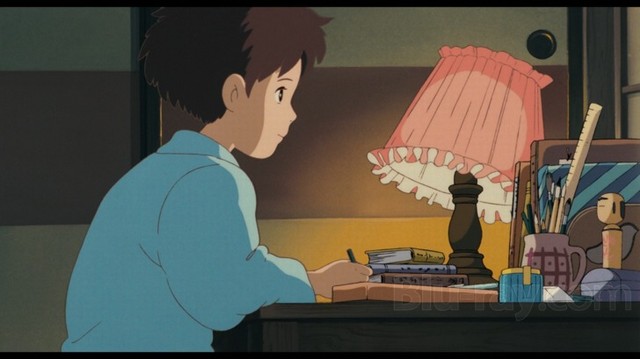 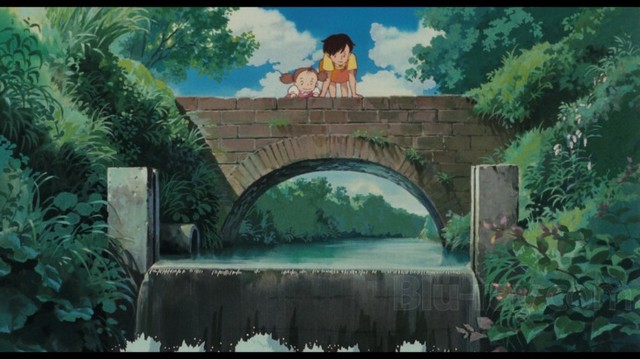 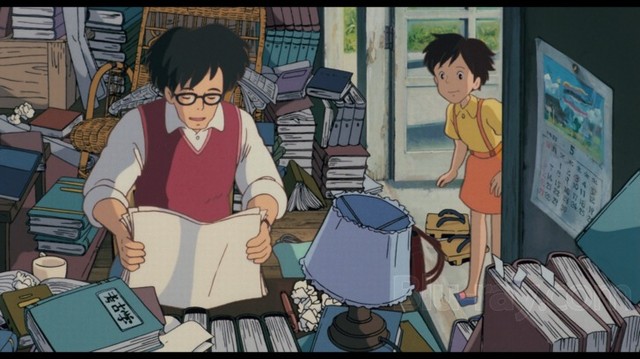 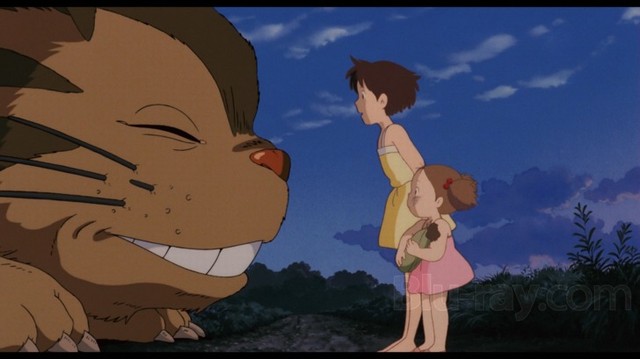