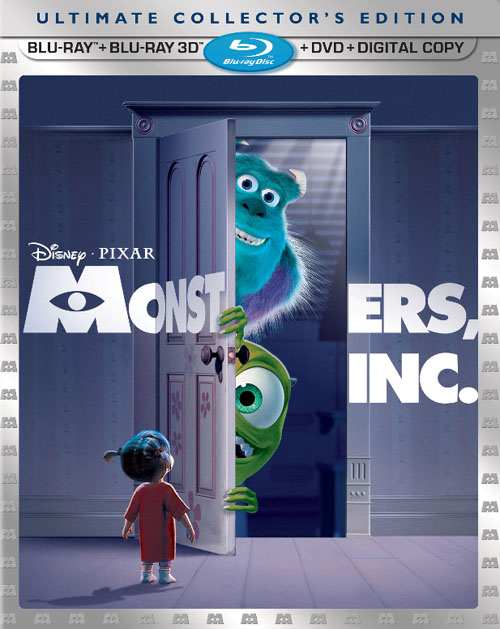 It’s hard to believe that it’s been 12 years since Monsters, Inc. debuted in theaters, but what’s not a surprise is just how well the film holds up a decade plus later, both in timeless storytelling and even technology. Arguably, CG is light-years beyond what it was in the pre-2001 development time of this feature film. One only need look to recent triumphs like Brave to see that, but at the fundamental levels of art design and texture detail, I’d stack Sulley’s fur follicle count up against Princess Merida’s fiery locks any day of the week.

With the sequel, Monsters University right around the theatrical release corner, Disney has taken the time to remaster and rerelease Monsters, Inc. in stunning 3D. Much like Finding Nemo, the film had a short run in the theaters over the holiday and now it’s time to enjoy the adventure at home on this impressive Blu-ray Ultimate Collector’s Edition release.

The only thing the folks over at Pixar do better than CG is tell a good story, and Monsters, Inc. is about as original as it gets. It only takes a few minutes of screen time to get firmly entrenched in the concept that there is a secret world of monsters who invade the human world every night via the closet doors of innocent children. Their sole purpose is to scare the children and collect their resulting screams, the primary energy source of the monster world. The concept is far scarier than the execution thanks to the charmingly designed monsters that generate more smiles than terror. 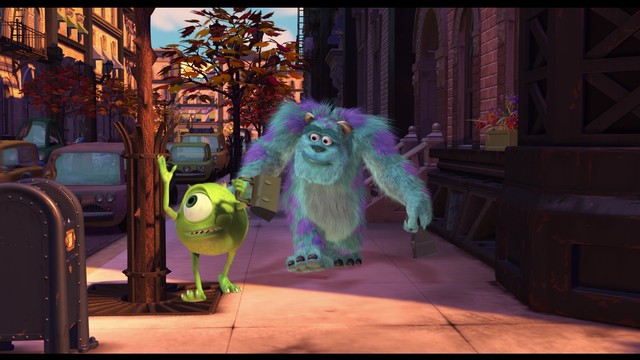 Time are tough though, as kids in the human world have become much harder to scare, forcing a lot of shredded doors and an inevitable energy crises that threatens the future of the factory where our two main characters work. Meet top scare employee of numerous consecutive months, Sulley (John Goodman) and his roommate/best friend/co-worker, Mike Wazowski (Billy Crystal). These guys perform like a well-oiled machine, much to the delight of boss, Henry Waternoose (James Coburn), and much to the chagrin of rival scare technician, Randall Boggs (Steve Buscemi) who has his own evil agenda for increasing his energy harvesting quota.

The story and humor are delightfully simplistic and expertly executed; mostly based on the concept that the monsters are more afraid of the children than they are of them. There are numerous safeguards in place to ensure that no part of the human world comes back through the closet door portal; a point painfully played out when a sock with static cling hitches a ride on the back of one particularly hairy monster and he is subject to the rapid response detox team complete with hazmat shower, full body shave, and humiliating head cone. And if that’s what they do with just a sock imagine what would happen if an actual child came through the door.

That’s exactly what happens late one night when Randall is up to his sinister plans and Sulley and Mike catch him in the act. Now it’s up to our heroes to not only overcome their own initial fear of the human child contaminating their world, but ultimately protect her until they can return her safely to her own bedroom. 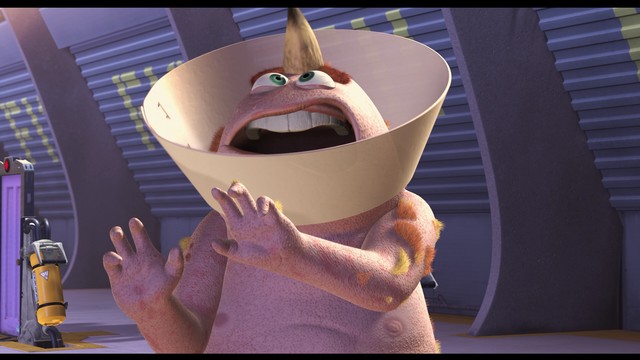 The chemistry between Goodman and Crystal is undeniable, and the banter flows nearly nonstop throughout the film. Crystal isn’t really playing a character as much as just allowing his own unique personality to inhabit this spherical green Cyclops. Goodman plays the straight man of this comedy duo, usually setting up Crystal for one comic line after the next, but he is also allowed to shine in a more dramatic and almost fatherly way. His expressive relationship with Boo transcends words with the sole exception of the final tear-inducing line in the film.

When we aren’t being subjected to the rapid-fire delivery of humorous dialogue there are all sorts of obvious and not-so-obvious visual sight gags integrated into almost every scene. Monsters, Inc. is as much a triumph of turn of the century CG technology as it is storytelling. The sets and locations are amazingly creative but it’s the monsters that steal this show with their comical design and meticulously crafted textures that will tempt you to count the fur on Sulley and the scales on Randall. The 1080p/AVC MPEG-4 is a beauty to behold and the MVC 3D experience rivals the 3D theatrical experience in every way. The 3D really pops, adding great depth to the scenes and making the characters even more lifelike than before. Every scene is loaded with rich and vibrant color and multiple levels of detail, and when coupled with solid black levels, bold contrast, and no discernible flaws, artifacts, banding, or ghosting in 3D, Monsters, Inc is a remaster for the record books.

I was pleasantly surprised to see (or rather hear) than Disney had created an entirely new lossless Dolby TrueHD 7.1 surround track. Not that there was anything wrong with the DTS 5.1 mix from the 2009 Blu-ray release, but side by side this new 2013 remix will blow your mind if you have the home theater sound system to appreciate it. The inclusion of the additional channels creates a more seamless 3D experience for your ears to go along with the 3D experience for your eyes. Dialogue is flawlessly mixed so you never miss a witty word, and there are moments of LFE goodness that will reward your subwoofer investment. 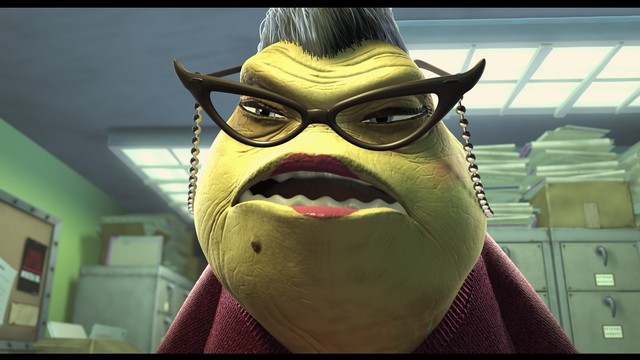 The four disc box set includes the 2D and 3D versions of the film on Blu-ray, the standard DVD, and a digital copy that will push the limits of your retina screen iPad. Sadly, when it comes to extras there isn’t much Disney could have added to the great selection of goodies already available on the 2009 release. Those have all made the trip to this package and sadly they are in SD, so they are a stark contrast to the quality of the feature presentation. I really was hoping for at least a small documentary on how they converted the film to 3D or perhaps a reunion roundtable four years later. There are two or three new exclusives but they don’t amount to much.

Disc one is home to Outtakes and Company Play, five hilarious minutes of 3D footage that ran alongside the theatrical credits. Discs one and two both contain 3D and 2D respective versions of extras such as Partysaurus Rex, For the Birds, and 14 minutes of Sneak Peeks as well as a 3-minute promo for Monsters University as well as the trailer. The feature commentary with Pete Doctor, Lee Unkrich, Andrew Stanton, and John Lasseter is only on the 2D version on disc two as is the 22-minute roundtable discussion. Disc three is home to all of the previously released bonus material including Mike’s New Car, Roz’s 100 Door Challenge, Pixar’s Fun Factory Tour, Story Featurettes, Banished Concepts, Storyboard to Film Comparisons, Designing Monstropolis, Set Dressing, Location Flyaround, Monster File, Music and Sound, and a 26-minute, six-part feature on the Animation process. There are also 17 minutes of release trailers and TV spots, 12 minutes of Monsters Only bonuses from the original DVD, 900 pieces of sketches and concept art in the Art Gallery, and a three-minute Wrap-Up from the filmmakers.

Even if 98% of the bonus features are recycled this newest version offers the absolute best graphical presentation in both 2D and 3D and when combined with the new lossless 7.1 audio mix, Monsters, Inc. has never looked or sounded better. This is without a doubt the definitive version of the film you can possibly own and a must-have addition to your Disney Blu-ray library. 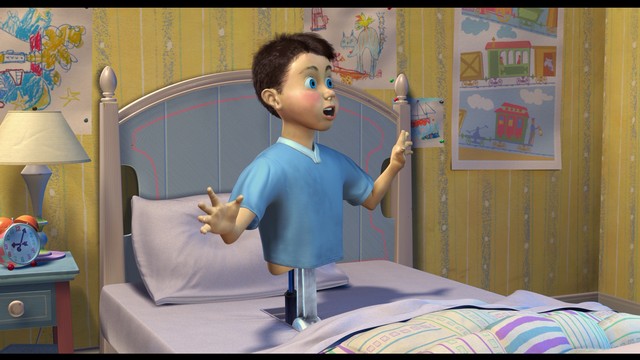 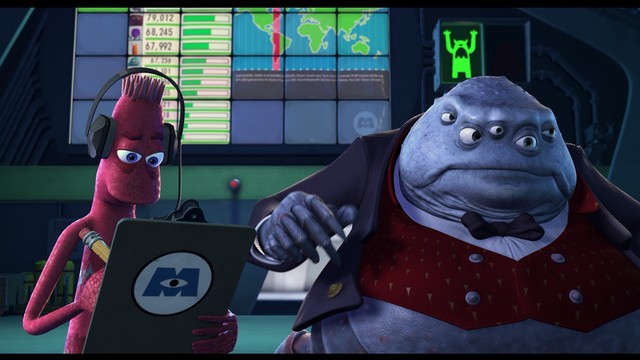 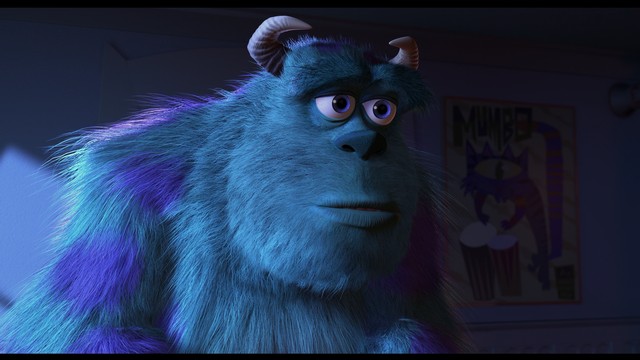 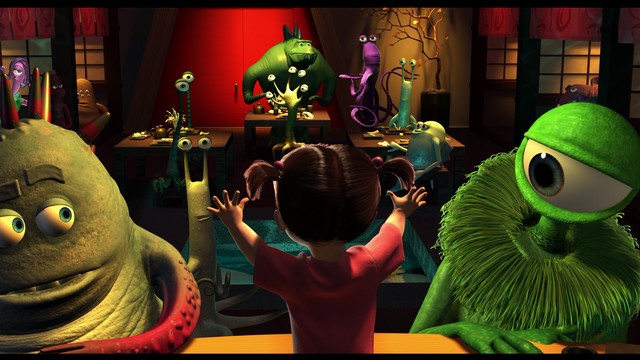 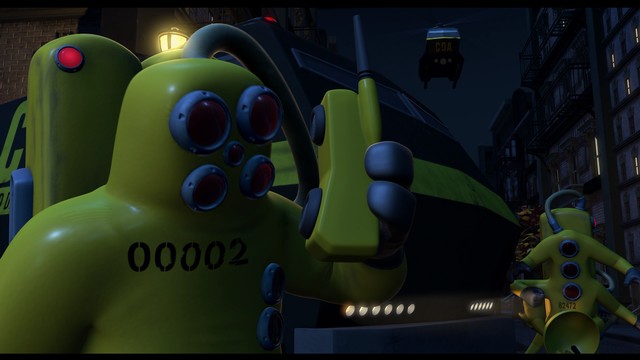 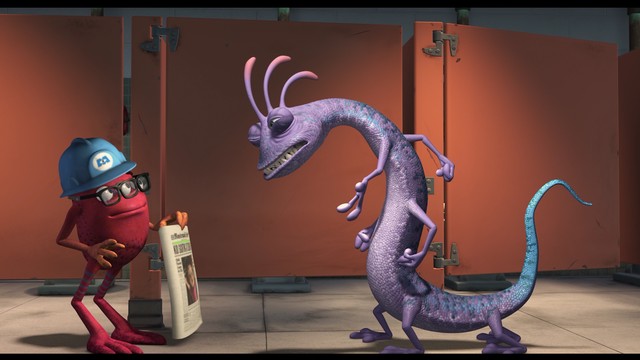 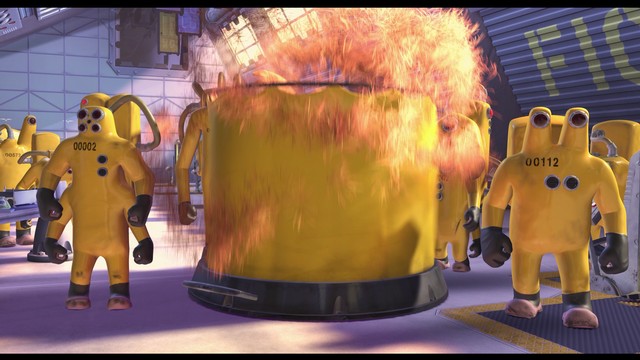 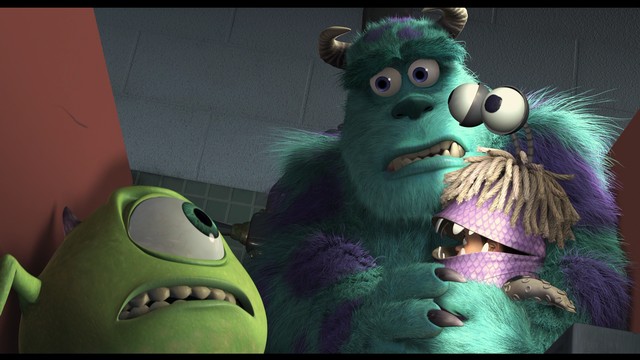 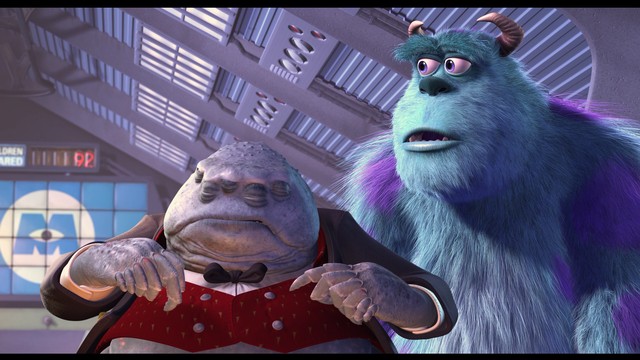 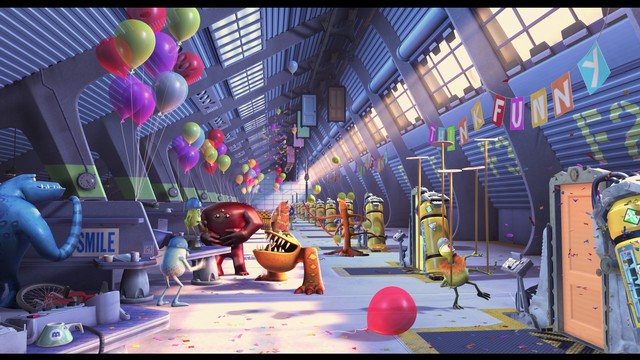 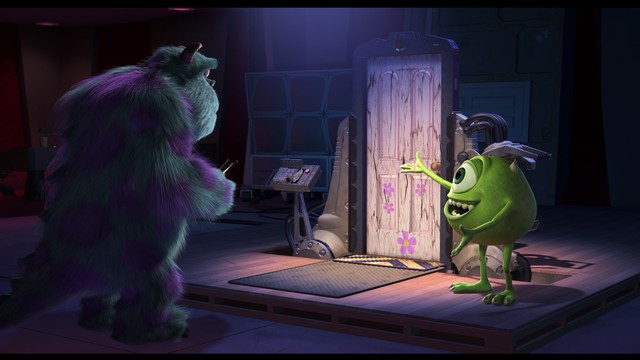 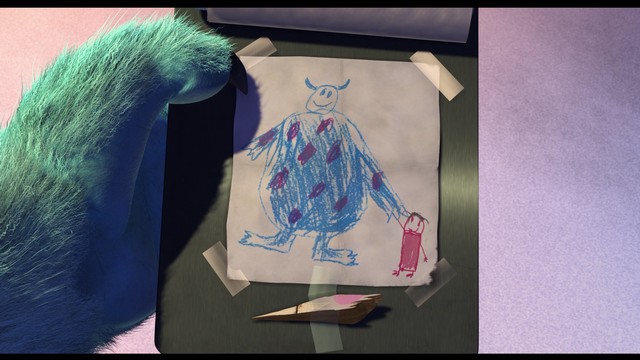