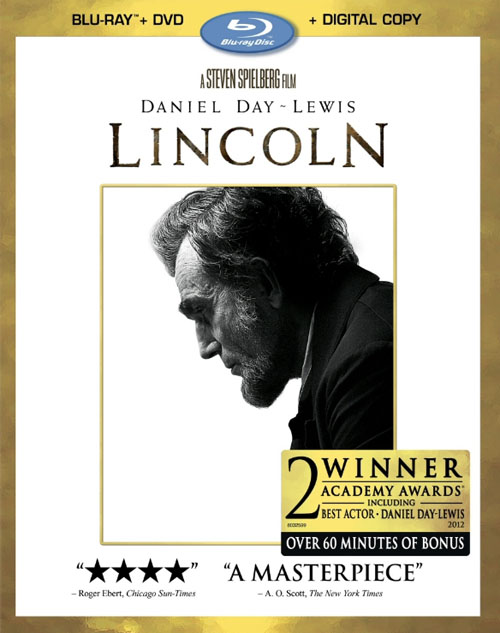 Everyone needs to see this inspirational movie.

My preferred taste in movies usually leaves me feeling a bit “left out” when Oscar season rolls around, but that still doesn’t stop me from watching the big award show and seeing what the more “cultured” people are watching…and liking. When it comes to a movie about Abe Lincoln I would be more likely caught watching him killing vampires than sitting through Steven Spielberg’s award-winning opus, but after seeing the various clips during the Academy Awards I have to admit my interest was piqued, and thanks to my wonderful job as an entertainment editor a Blu-ray copy arrived for review, so now I wouldn’t have to wait until the film hit HBO or some other movie channel.

Spielberg has been planning this film for quite some time now, and the end result is nothing short of cinematic perfection. Lincoln is arguably one of our nation’s most beloved presidents, and there is so much material the film could have used as a launch point, but rather than create a by-the-book biography that covers all the trite material we learned in grade school Spielberg chose to stick with the last four months of Lincoln’s legendary term as our country’s 16th president. Based on a screenplay written by Tony Kushner and inspired by the Doris Kearns Goodwin book, “Team of Rivals”, this massive document was whittled down to a mere 70 pages that deals solely with Lincoln’s desperate attempt to not only end the Civil War but also get the 13th Amendment passed through the House of Representatives.

Spielberg steers clear of his traditional “big spectacle” works and tells his story through lengthy speeches complete with flowery (and authentic) dialogue, and lingering camera shots that immerse you in every scene. With the exception of the opening battle sequence there are no huge set pieces or big action moments to distract from the gravitas of the content. And while the script and incredible production values are all worthy of a Spielberg production there is no denying the contribution of the award-winning cast led by none other than an unforgettable Daniel Day-Lewis as Lincoln. There is not a single second of the film that you are not convinced you are somehow actually seeing some lost footage from 1865.

While most of the film deals with Lincoln and his cabinet trying to figure out how to get his anti-slavery amendment passed as well as lengthy congressional debate scenes featuring outstanding performances by Lee Pace as Democrat Fernando Wood and Tommy Lee Jones as Republican Thaddeus Stevens, there is still time to briefly delve into the trouble relationship between Abe and his wife, Mary Todd Lincoln, brilliantly portrayed by Sally Field. David Strathairn also turns in an excellent performance as William H. Seward, Lincoln’s Secretary of State and trusted confidant, not to mention a host of other exceptionally talented actors all bringing their A-game in honor of Lincoln and Spielberg.

While Daniel Day-Lewis effortless dominates every scene in which he appears (which is most of them), credit has to be given to the gorgeous cinematography of Janusz Kaminski, Rick Carter’s meticulous production design, and the incredibly authentic costumes created by Joanna Johnston. As far as period pieces go, it just doesn’t get any better than this. And while the choices made on how to show (or rather not show) the inevitable conclusion at the Ford Theater, and end the film with a more triumphant recreation of Lincoln’s second inaugural speech might seem a bit emotionally manipulative, I found the unpredictable conclusion completely satisfying.

There is no denying just how good this movie looks on Blu-ray, especially given the dark and moody nature of the cinematography that bounces between sepia tone colors to almost pure black and white monochromatic sequences. The 1080p/AVC transfer is loaded with detail allowing you to appreciate the work that went into the hand-stitched wardrobe, the silk-screened wallpaper, and the hundreds of handwritten notes and documents that litter the tables in the White House offices. Colors are desaturated if not entirely absent and there is an overall softness to the film, but black levels and contrast are consistently solid throughout.

The DTS-HD MA 7.1 audio track may seem a bit underutilized in a dramatic dialogue driven film such as Lincoln, but all the channels come into play for scenes like the opening battle sequence and the big debate sequences on the House floor. There is little use of LFE so my subwoofer rarely barked and my rear channels only came into play for exterior shots and circling camera shots in Congress. All of the dialogue was heavily prioritized to the front center with occasional panning to the left and right. It was all expertly balanced, and I never missed a single dramatic word or a single bar of John Williams’ memorable score.

At first glance Lincoln would appear to be loaded with extras considering they had to use a second disc to house them, and while the bonus features that are provided are quite good, you can’t help but want more. We all know Spielberg doesn’t do commentaries, but we do get some insightful interviews in several of the features starting with “The Journey to Lincoln”, a 9 minute feature with director/producer Steven Spielberg, Kathleen Kennedy, Tony Kushner, Daniel Day-Lewis, Rick Carter, and author Doris Kearns Goodwin who discuss the long road from book to screenplay to the big screen. “A Historic Tapestry: Richmond, Virginia” is a brief 4-minute look on location shooting in Richmond Virginia while “Crafting the Past” spends 11 minutes going into more detail on how these locations were enhanced, sets were built, and props and wardrobe were researched and crafted.

Disc two is home to several features exclusive to this four-disc set. “In the Company of Character” is a 10-minute all-too-brief look at the process and commitment of the actors to bring their characters to realistic life. “Living with Lincoln” is perhaps the most rewarding of the features. Clocking in at 27 minutes, we get much more information on the entire creative and production process of making this movie a reality. And finally, “In Lincoln’s Footsteps” is a 17-minute documentary that covers anything the other features may have left out including John Williams’ choice to not only record the soundtrack in Chicago but use their orchestra as well in a nice tribute to the state of Illinois; the first state to ratify the 13th Amendment as well as Lincoln’s home state. There is also a standard DVD copy and a digital copy that looks pretty good on my iPad as long as I’m watching in a dark room.

Lincoln is available in two releases; a two-disc Blu-ray with only the first two features and a standard DVD copy, or the four-disc set I’ve reviewed here today. With only five dollars separating the two, the digital copy alone makes the upgrade worth the cost, but the best of the bonus features truly are on that second disc. Regardless of which version you buy, everyone needs to see this inspirational movie featuring some of the most memorable performances in the history of film, and Blu-ray is the only way to appreciate this dark and brooding masterpiece.