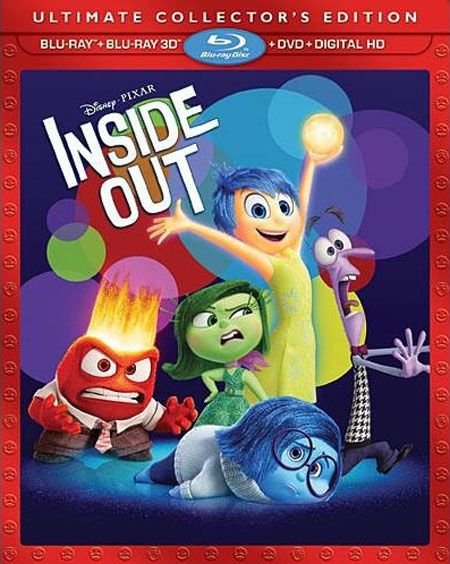 Advanced concepts may sail over the heads of younger kids.

A rollercoaster ride of mixed emotions perfect for the entire family.

I tend to avoid theaters these days unless the film is some big blockbuster action flick worthy of a large screen/IMAX experience, so while almost everyone I knew was going out to see Inside Out in theaters, I sat at home listening to how great it was from all who did see it.   Needless to say, I was eager to do this review.  Disney and Pixar have created one of their more unique masterpieces with Inside Out, daring to go inside the human psyche much like the TV series; Herman’s Head did back in the early 90’s.  As I sat there totally engrossed by not only the story, but the bold conceptual way it was being told, I had to wonder if kids were actually going to understand what was going on.   Thankfully, there is enough delightful Disney charm at work that it doesn’t even matter.

With Inside Out, Pixar breaks down the human mind into five core emotions; Joy, Sadness, Anger, Fear, and Disgust, each represented by a signature character and expertly voiced by some great acting talent.   A quick tally yields the disturbing results that Joy is the only positive emotion surrounded by a whole lot of negativity.  What would happen if something ever happened to Joy?  Is Pixar dooming humanity to a joyless life or at best a life where we have to scrape and fight for happiness?

That is the very question Inside Out deals with, but only after a delightful intro montage that shows the star of our show, Riley (Kaitlyn Dias), from birth to pre-teen.  There is a lot of exposition in the first few minutes of the film showing how memories are made, stored, and which ones become core memories that fuel core personality traits represented by floating islands inside the mind.  Riley’s seemingly idyllic childhood takes a turn for the worse when her father relocates the family from Minnesota to San Francisco. 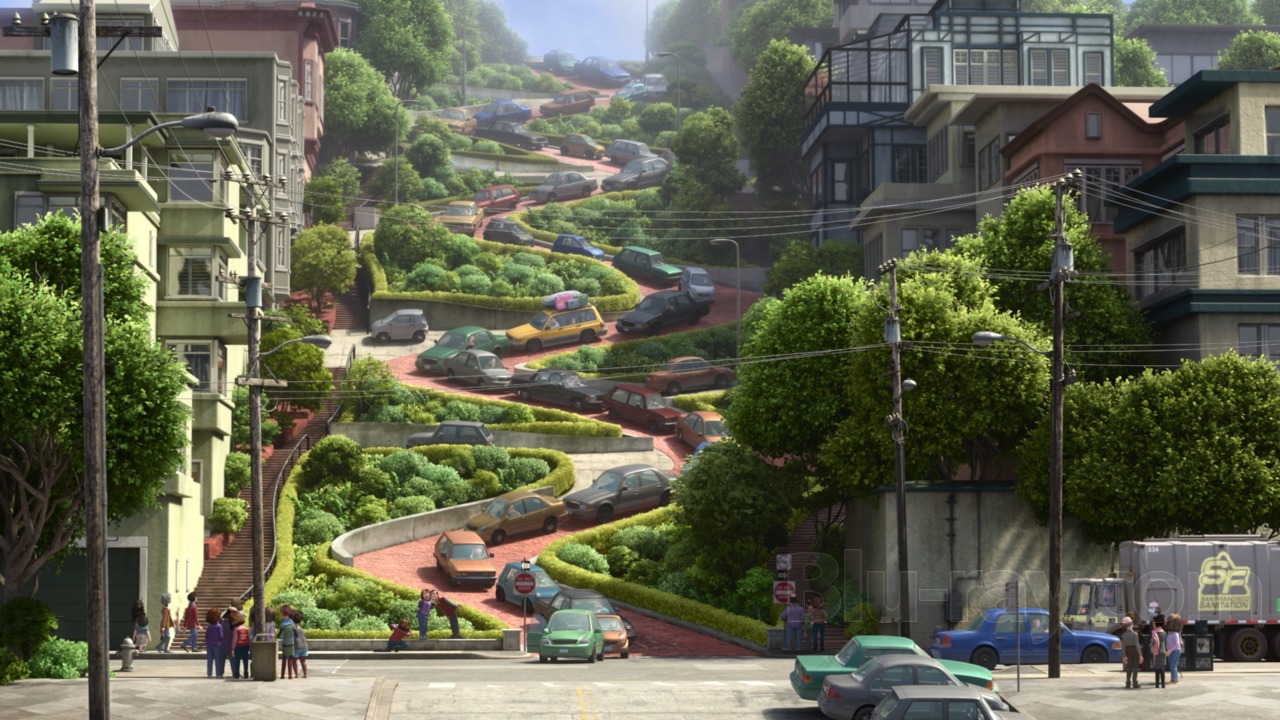 Joy (Amy Poehler) does her best to keep a smile on Riley’s face during the transition, but it’s an overwhelming job when Sadness (Phyllis Smith), Fear (Bill Hader), Disgust (Mindy Kaling), and Anger (Lewis Black) are all contributing to a pot of mixed emotions.  And Sadness now seems to be turning old positive memories into sad ones, sending Riley deeper into isolation.  During an altercation with Sadness both Joy and Sadness are transported out of the control center and lost in the maze-like world of Riley’s memory library, and with those two gone, Fear, Disgust, and Anger are the only emotions left to rule Riley’s life.  It’s an ingenious concept and perfectly executed with typical real-life rebellious behavior, but despite her parents’ best efforts nothing is going to restore Riley until Joy and Sadness can get back home.

The second and third acts of the film deal with Joy and Sadness making the epic journey back to the control room.  Along the way they will meet all sorts of clever conceptual characters and places like Riley’s old imaginary childhood friend, memory wipers, Imagination Land, and they even take a wild ride on the Train of Thought.  As Riley sinks deeper into depression it’s a race against time to shed some positive emotion into Riley’s life, which surprisingly includes just a bit of sadness. 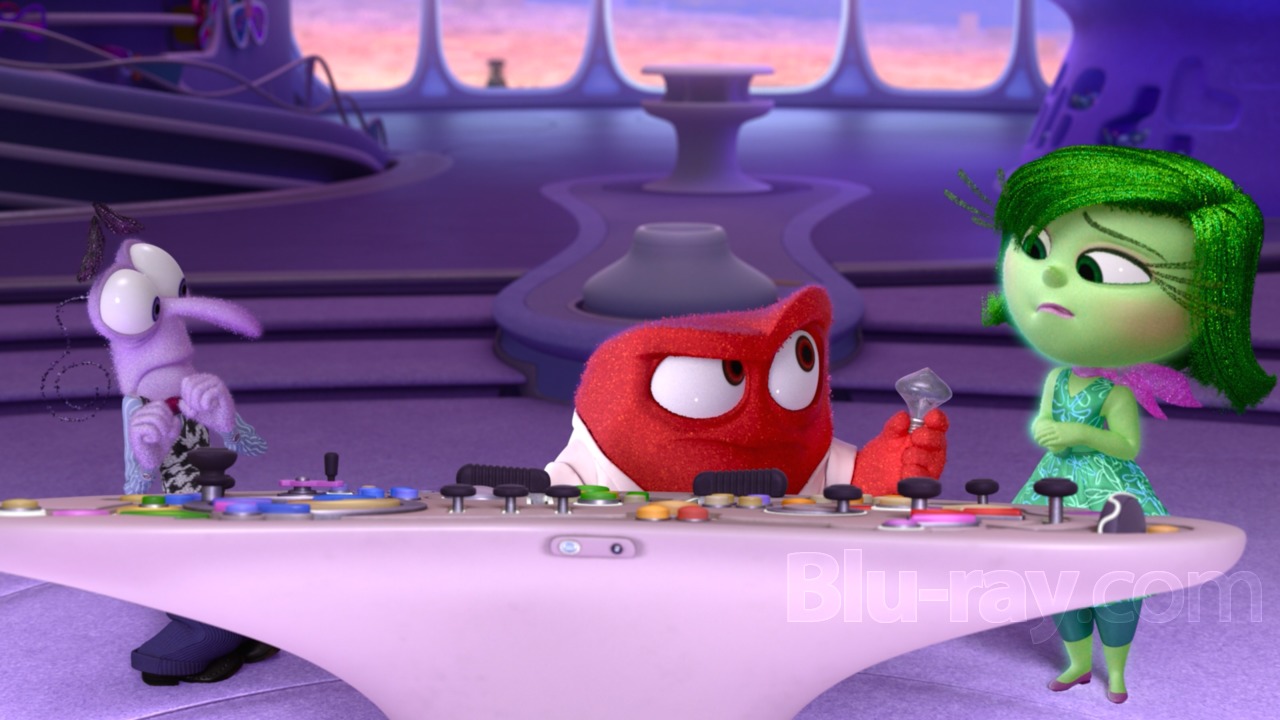 I avoid 3D in theaters like the plague, but ever since I upgraded to a 4K HDTV I love watching 3D at home, and Inside Out 3D is perhaps one of the finest 3D transfers in my growing collection.  Animated films always seem to benefit the most from the 3D treatment and this film is no exception.  The level of depth and clarity to each and every scene is outstanding.  The effect is used to create an almost photo-realistic quality to Riley’s real life while exaggerating perspective a bit when we go inside her mind to show the vastness of space and memory potential of the human brain.

As with most 3D movies these days, there are no in-your-face moments, but rather a depth perception that sinks into the screen and invites you to step inside.  A 2D version is also included in this box set and looks just as good as far as color and texture detail, but once you have experienced Inside Out in 3D it is hard to ever watch it any other way.  If you have a 3D TV then you absolutely owe it to yourself to spend the extra money to get the 3D version. 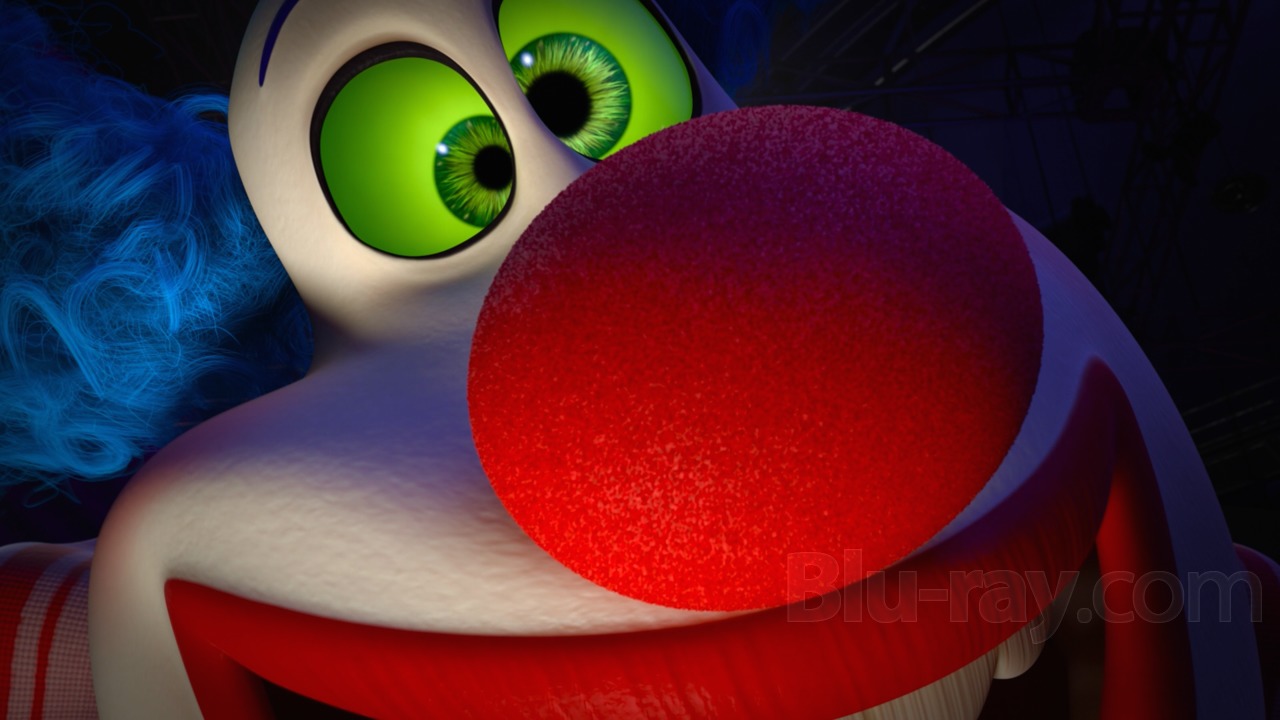 The DTS-HD MA 7.1 audio mix is just as outstanding as the visuals with expert use of all the surround channels and perfectly mixed levels for dialogue and an overwhelmingly emotional score that will surely generate some excess eye moisture at some point in the film.  There is even some subtle use of LFE when Riley’s personality islands start to crumble away.

Inside Out is bursting with extras; so many they all couldn’t fit on the feature disc.    The 2D film disc does include the musical short, Lava (also available in 3D on the 3D disc), which is one of the more impressive shorts of recent Pixar memory with a delightfully catching song/story.  Riley’s First Date is a fun short film that could have easily been a deleted scene from the film.  Paths to Pixar: The Women of Inside Out is an interesting feature that showcases various female cast and crew members discussing how this film was relevant to them.  Mixed Emotions is a brief look on the design of the core characters, and a feature Audio Commentary with Director Pete Docter and Co-Director Ronnie Del Carmen wraps up the bonuses on this disc. 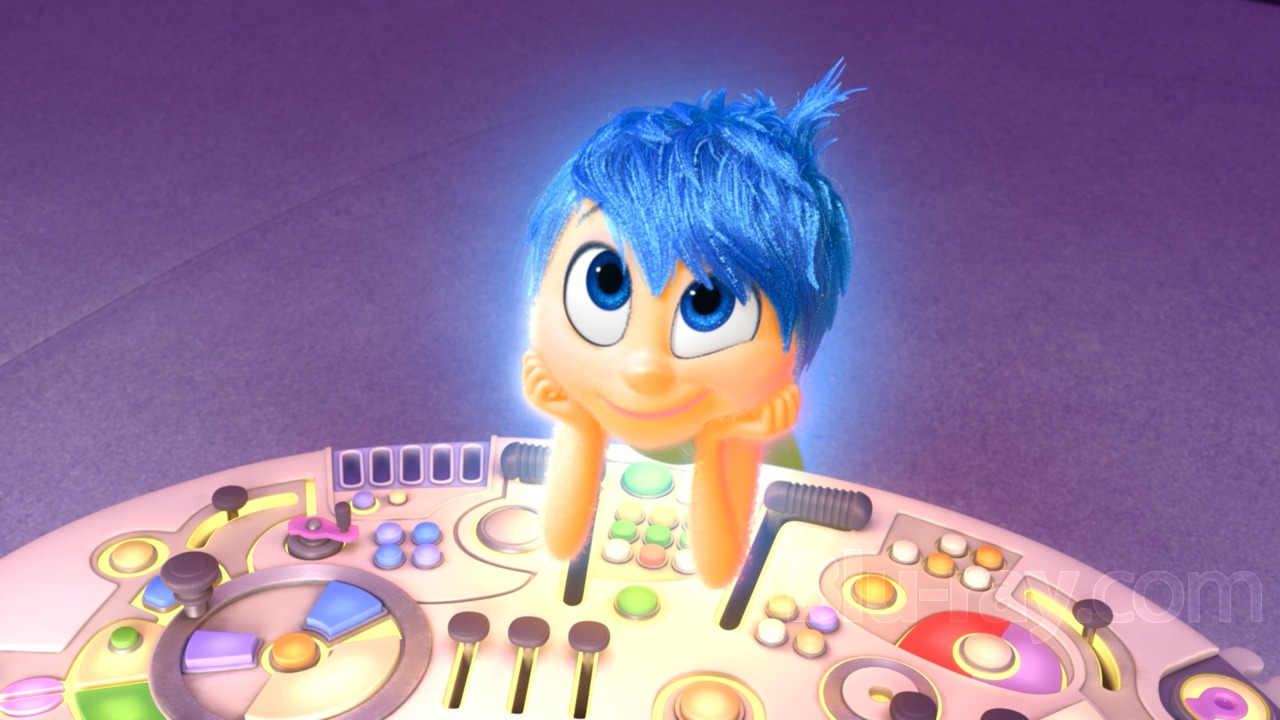 The Supplement Disc has even more great bonus features including; Story of the Story that goes inside the creations of the concept and story for the film.  Mapping the Mind shows how they designed the mind of a young girl while Our Dads, the Filmmakers feature Elie Docter and Gracie Giacchino talking about their fathers’ work on the film.  Into the Unknown: The Sound of Inside Out goes into great detail on the sound creation and mixing of the film while The Misunderstood Art of Animation Film Editing talks about the challenges of actually editing an animated film.  Mind Candy is a large collection of extra character moments, and things wrap up with four Deleted Scenes in various stages of completion with an intro by Pete Docter.  There are a few trailers tacked on if they didn’t auto-play when you inserted the disc, and the box set also comes with a standard DVD and a digital copy that looks amazing on an iPad retina display.

With no kids of my own I have no idea how much of this film resonates with the typical Pixar demographic.   I’m guessing kids around the same age as Riley will probably get the gist of what is going on, then again, the movie could also create the false illusion that we are mere puppets to the emotional voices inside our heads, and life is beyond our control.  Regardless of what you take away from the film or even your level of understanding of the human mind, Inside Out is one of Pixar’s finest (seems I say that with each new release), and a movie that you certainly don’t want to miss.   The level of technical proficiency that went into this Blu-ray release, both in 2D and certainly in 3D makes this a must-have addition to your home video library. 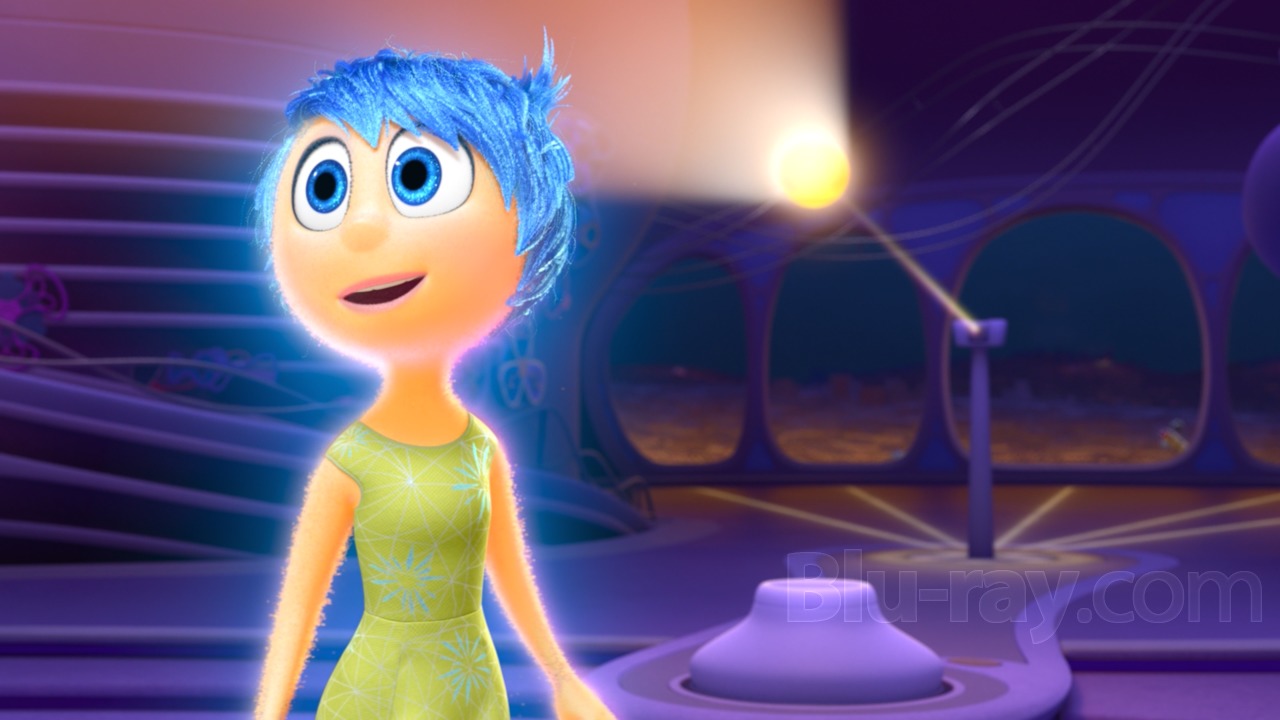 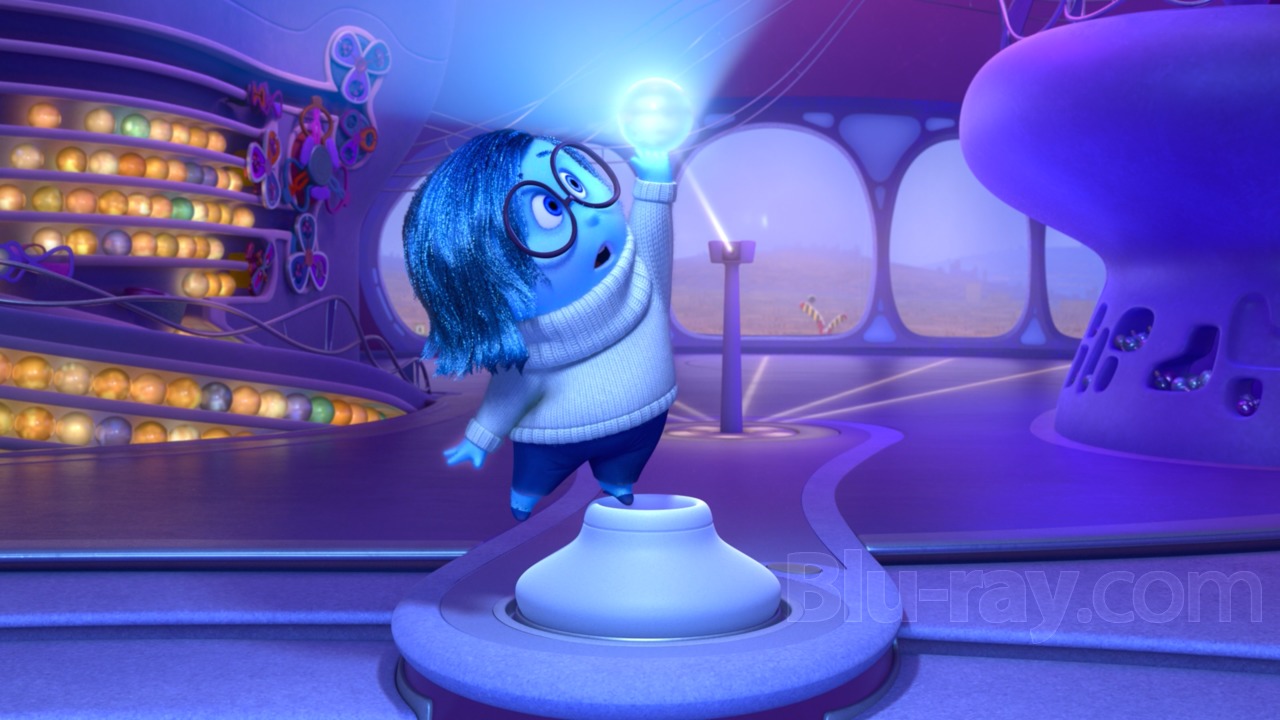 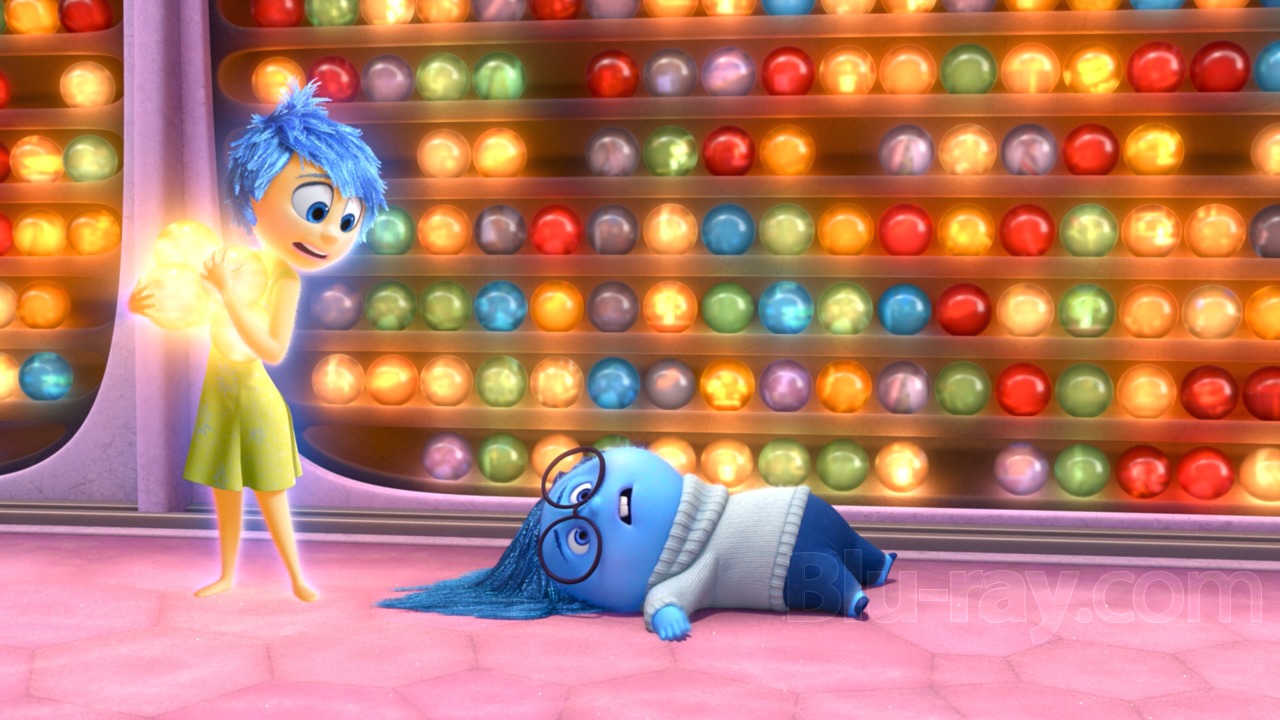 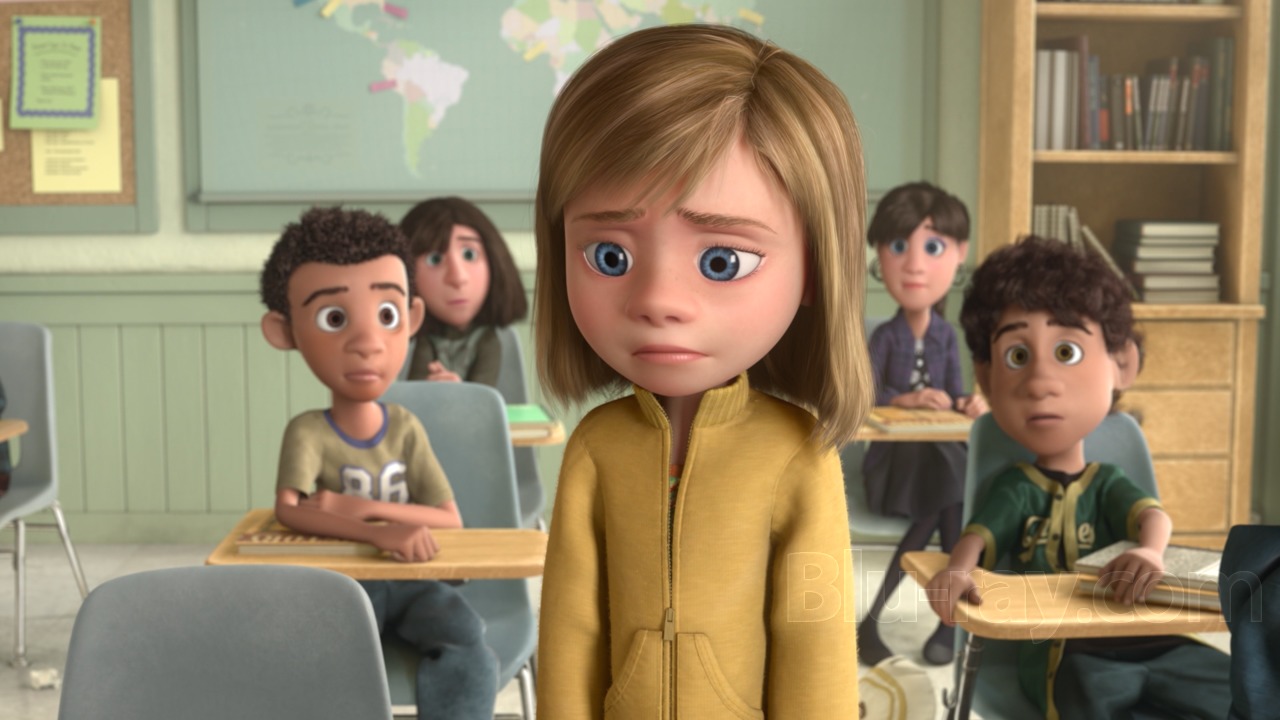 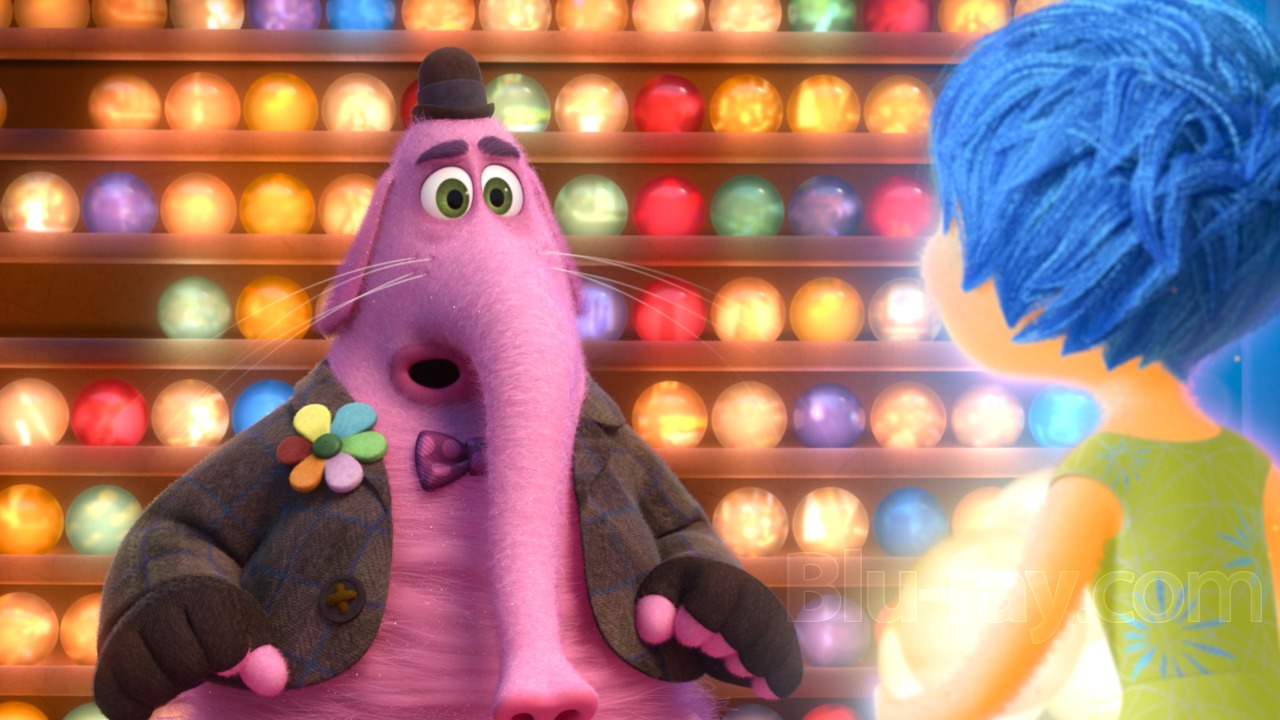 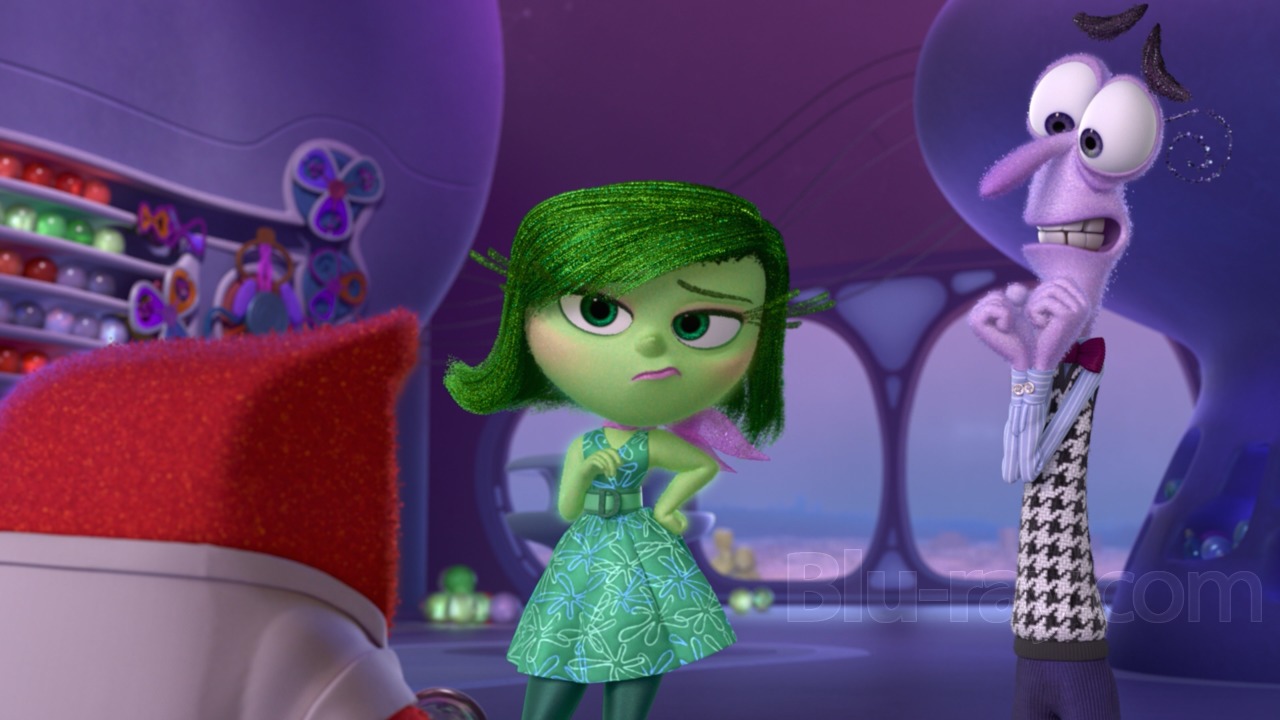 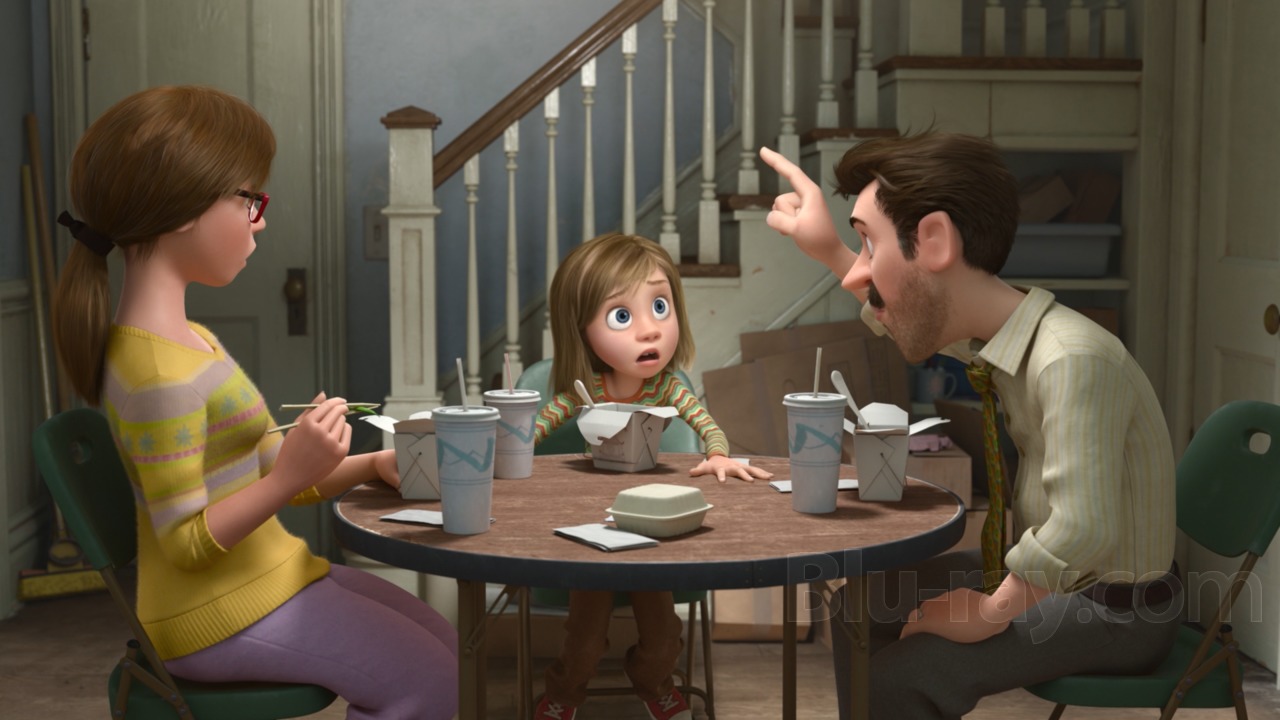 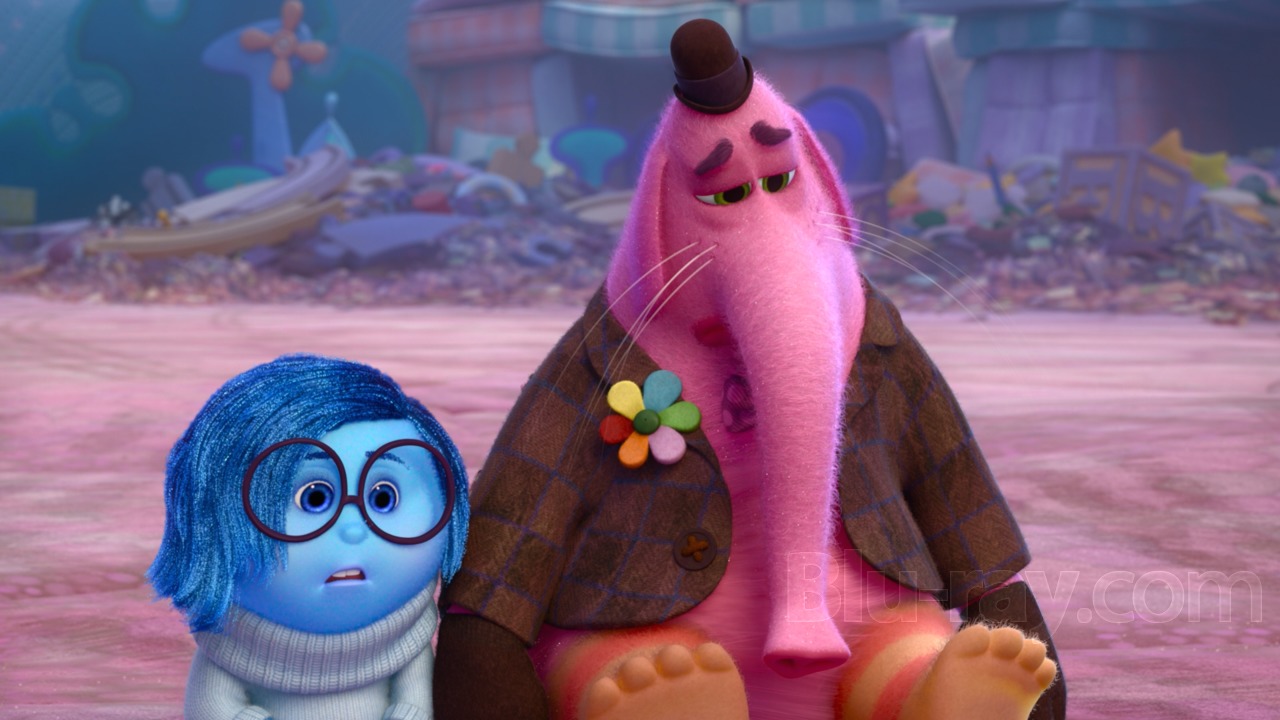