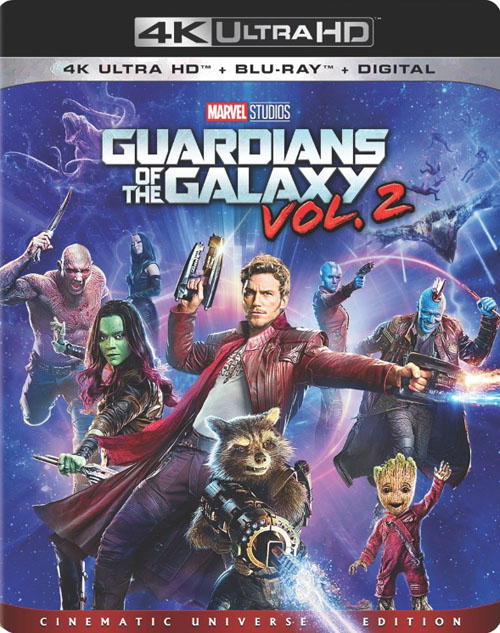 - Commentary is only on Blu-ray version

Well, the wait is finally over. Disney has finally hopped on the 4K/UHD bandwagon and naturally they have set the bar so ridiculously high that all other studios have been put on notice. I was sure that Star Wars would be their debut title, but now that I have seen the mind-blowing, jaw-dropping glory of Guardians of the Galaxy Vol. 2 I’m perfectly happy that one of my favorite MCU titles celebrates this honored spot in home video history. It was practically written in the stars, what with James Gunn shooting the movie in 8K, creating one of the best IMAX 3D experiences of my life. I had impossibly high hopes for this home release and Disney didn’t disappoint.

Guardians of the Galaxy Vol. 2 picks up just months after the events of the first film, with our diverse group of space heroes doing the random odd job in order to save Gamora’s (Zoe Saldana) sister, Nebula (Karen Gillan). Naturally, Rocket’s (Bradley Cooper) greed gets the better of him and the Guardians incur the wrath of the Sovereign People. This all ends up in a first-act epic space battle and daring escape through an asteroid field and the eventual encounter with Ego (Kurt Russel), who turns out to be Star-Lord’s (Chris Pratt) father as well as some sort of Celestial space god bent on dominating the entire galaxy.

The themes of family are fairly obvious throughout the film, both with Quill and his newfound dad, as well as Gamora and Nebula repairing their broken sisterly bonds. Even Rocket and Yondu (Michael Rooker) have an emotional breakthrough late in the film. Humor plays a major role in the story with non-stop wisecracks from nearly everyone including Groot (Vin Diesel). Drax (Dave Bautista) really comes out of his shell for the sequel and delivers a majority of the comedic material often followed by powerful laughing that borders on annoying. There are amusing stunts and action gags like Rocket booby-trapping the forest against the Ravagers, and some fun cameos from Sylvester Stallone and David Hasselhoff.

The movie takes a dark twist for the final act when Quill is forced to deal with some daddy issues for both his biological and adopted dads. As Yondu elegantly puts it, “He might be your father but he ain’t your daddy.” In the end, our group of heroes is bonded even more tightly than when the film starts, and with the hope of new members joining the team we look forward to more appearances from the Guardians in Avengers: Infinity War and future Guardians of the Galaxy sequels.

As mentioned, Guardians of the Galaxy Vol. 2 is Disney’s first UHD Blu-ray and it is gorgeous. They really couldn’t have picked a better film, not only because of the 8K source material but also James Gunn’s dynamic color choices where every scene in the film is designed around a specific color pallet. The HDR brings the colors to incredible life while preserving a realistic, yet intense level of contrast and shading for the darker scenes so nothing is lost in the shadow. The level of detail is off the charts. You can trace the intricate lines on Drax’s skin or study the pores on Yondu’s face or marvel at the detail on Nebula’s implants, or if you’re up to the challenge, try counting the hairs on Rocket’s fur…you can.   It’s worth noting that I also watched the film on standard BD (for the commentary) and even though the colors and the bright spots didn’t “pop” quite as much, the up-conversion from 1080p to 4K was still impressive.

4K owners will also get the added immersion of a Dolby Atmos mix, while the BD version tops out with a DTS-HD MA 7.1 mix.   I’m not sure why they couldn’t have stuck the Atmos mix on the BD as well, because the object-oriented sound design is so much more immersive. There were some scenes where sounds were coming from all directions including the ceiling, creating a truly engaging experience normally reserved for the fancy theater. If you have an Atmos setup this is going to showcase it in style. The mix is equally as perfect with prioritized dialogue and sound effects balanced with the movie’s epic soundtrack that seamlessly blends score and licensed 80’s tunes to not only create the perfect emotional mood, but in many ways actually tell parts of the story through lyrics and tonality. James Gunn is one of the few directors who recognize that music is an integral part of movie-making, and Vol 2 takes it to the next level.

While branded with the Cinematic Universe Edition on the bottom of the box there really isn’t as many extras as you might think, and there are no extras on the actual 4K disc, so prepare to pop in that BD copy for your supplements. First up is the Feature Audio Commentary with James Gunn who delivers a non-stop informative and entertaining commentary on every aspect of the film including calling out all of his family members that got cast as extras. It’s truly one of the best commentaries of recent memory. James also does a short Visionary Intro segment.

The rest of the bonus material is divided into a four-part documentary where we go In the Director’s Chair with James Gunn who fills in any gaps left over from the commentary.   Reunion Tour: The Music of Guardians of the Galaxy Vol. 2 is a comprehensive discussion on the important of music and some of the choices made for this film. It was also interesting to learn that the score was mostly composed prior to filming and played on set to influence the actors and crew. Living Planets and Talking Trees: The Visual Effects of Vol. 2 is an informative piece on the creation of all the fantastic visual effects for the movie while Showtime: The Cast of Vol. 2 wraps up the documentary with a focus on the actors and how they immerse themselves in their unique roles.

The rest of the bonus material includes a humorous (and slightly creepy) Music Video with James Gunn’s own band and David Hasselhoff performing Guardians Inferno; the song from the final credits. There is an amusing Gag Reel as well as some Deleted/Extended Scenes that were justly excised from the film. A digital copy that works with iTunes is also in the box, so you can enjoy this gorgeous film on your favorite retina mobile device.

Guardians of the Galaxy Vol. 2 does a fantastic job of picking up where the first film left off, yet remains approachable for those who may have missed their debut. There are definitely some rewarding insider moments for those who have seen the original and even played the spin-off adventure game from Telltale. The action and set pieces are bigger than ever yet the focus remains remarkably tight and the emphasis on family is front and center to every element of the story. And you can experience it all on one of the best 4K/UHD releases of the year, and a movie no 4K home theater enthusiast should miss. It truly is out of this world.