From Up on Poppy Hill – Special Edition Blu-Ray Review 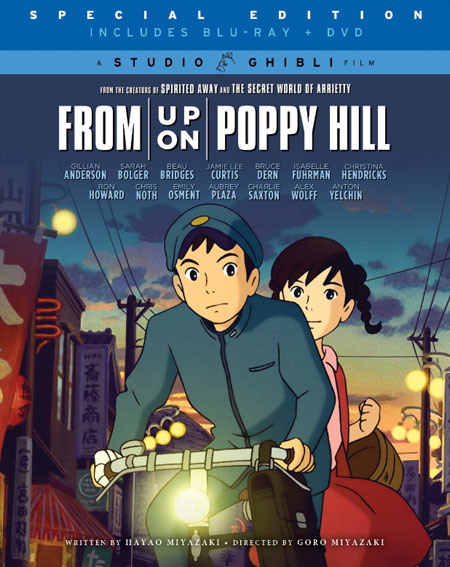 Studio Ghibli films are something of a favorite of mine when it comes to animated movies and I always jump at the opportunity to go see one in theater or to review the latest version of one of their films. Traditionally most of the films that are released here in the States through Disney are written and directed by famed animator Hayao Miyazaki himself. Most people that have experienced a Studio Ghibli film are used to stories filled with the supernatural and fantasy elements while mixing in elements of history and culture. Their newest endeavor on Blu-Ray and DVD, From Up On Poppy Hill, marks the first time that a Studio Ghibli film has not been distributed by Disney. It is also one of few Studio Ghibli films released here in the States that tells a normal story without some magical influence.

From Up on Poppy Hill is based upon a serialized Japanese comic that has been carefully written for the animated film by Hayao Miyazaki and directed by his son Gorō Miyazaki. The story follows the day to day life of Umi Matsuzaki who lives in a boarding house high above the Port of Yokohama with her grandmother, two younger siblings and two tenants. Umi, with her mother abroad and her father deceased after his ship sank in the war, acts like the woman of the house and follows a personal tradition every day. While her father will never return home, she raised signal flags “praying for safe voyages” every day and it gains the attention of fellow student Shun Kazama who sees it one day from his father’s tugboat who writes a poem in the school newspaper. Umi utterly not impressed with his daredevil stunt to promote the restoration of the dilapidated Quartier Latin, later finds out that Shun wrote the poem. She starts to have feelings for him after she decides to help with the newspaper and even suggests that the female students could help fix the place up to keep it from being demolished. Things don’t quite well for Umi and Shun after she shows him a photo of her late father as he starts to avoid her. 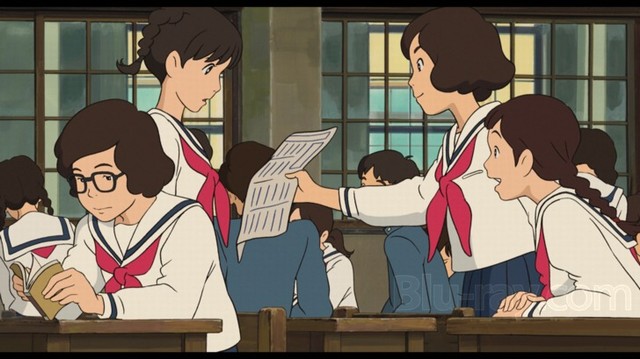 I won’t spoil the rest of the film but I really enjoyed the two stories as they intertwine throughout the film. Unlike other Ghibli films, this one follows the story of two very interesting characters going through everyday real circumstances. There is something very beautiful and charming about this post-war story that showcases Japan’s want to progress into the future and forget the past. The school board wanting to tear down something cherished by the students there to build a newer, more modern and probably safer building is proof of that. It is the past that really comes to the present as Shun and Umi figure out their lives while trying to preserve some of the heritage of an era that while terrible shouldn’t be forgotten in the hearts of the students and the adults.

From Up On Poppy Hill while featuring a very real down to earth story can still be easily recognized as a Miyazaki film(both elder and Goro) by the studios’ unique trademark animation style. One of personal joys of experiencing a Ghibli film is the attention to detail of the slowly dying art of hand drawn animation that the folks at Ghibli still perfect with each new film. Each frame of every scene is brought to life with rich palettes of colors presented in 1080p High Definition.

The character are believable as they experience love, sadness, joy and determination throughout the story all thanks to an amazing all-star cast featuring the voice talents of Sarah Bolger, Anton Yelchin(Star Trek), Beau Bridges, Ron Howard, and Jamie Lee Curtis to name a few. To top it off the sound direction is spot on as Ghibli creates the believable Port of Yokohama and Tokyo that are features in the film. There is a subtle depth to the film that can be heard in layers like background noise from all the clubs crammed into the old Quartier Latin as well as the muffled explosion of a mine detonating during a flashback. 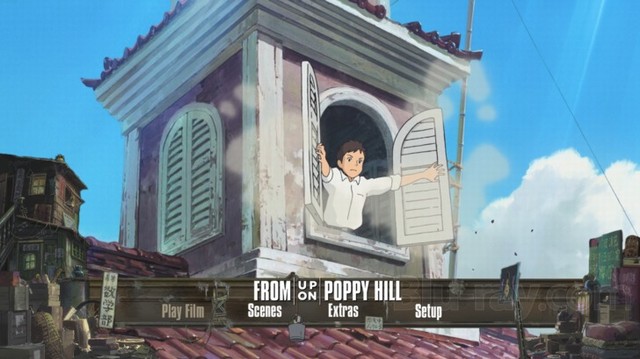 One of favorite things about the film however is the music composed for the film which features real music tunes from the 60s here and there. Unlike the other films is Studio Ghibli’s remarkable library, From Up On Poppy Hill, has an amazingly upbeat soundtrack that really caught my attention especially in the restoration montage of the clubhouse when listening to the film in a 5.0 DTS-HD Master Audio mix for both the native Japanese and new English dub.

The From Up On Poppy Hill Special Edition Blu-Ray not only comes with a DVD copy of the film but features a lot of bonus content to view and enjoy for those Studio Ghibli fans like myself. Included on the Blu-Ray disc is feature length storyboards, a featurette from the English Dub cast as well as one on Yokohama, a music video of the theme song, and an interview of director Gorō Miyazaki himself. I also really liked the speech and press conference video by Hayao Miyazaki which shed light on the troubles that affected the film during a tough time in Japan. As a nice bonus the From Up On Poppy Hill Special Edition Blu-Ray comes with a 16-page booklet filled with artwork and a letter from Goro and an excerpt from the project proposal by Hayao Miyazaki that led to the creation of this fantastic film. 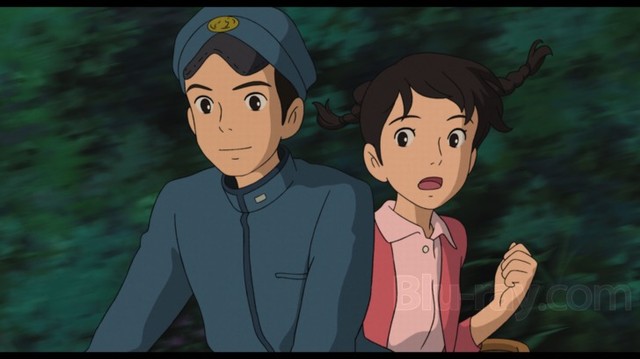 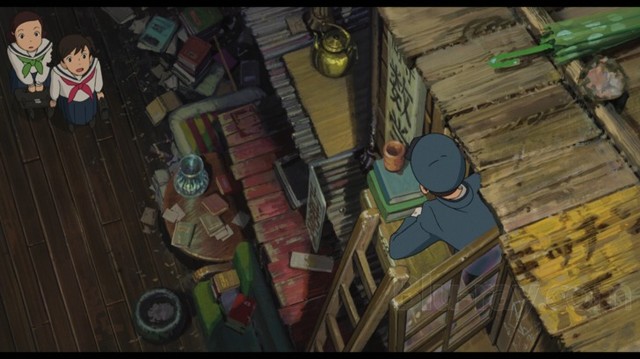 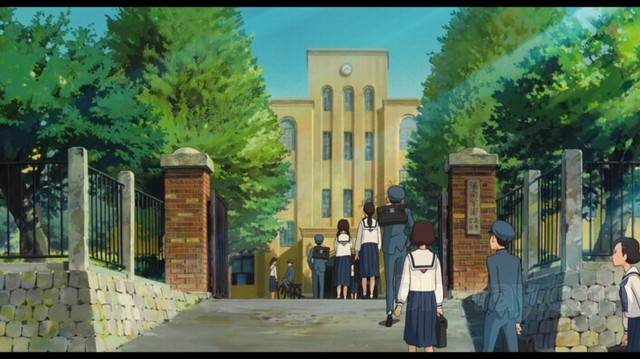 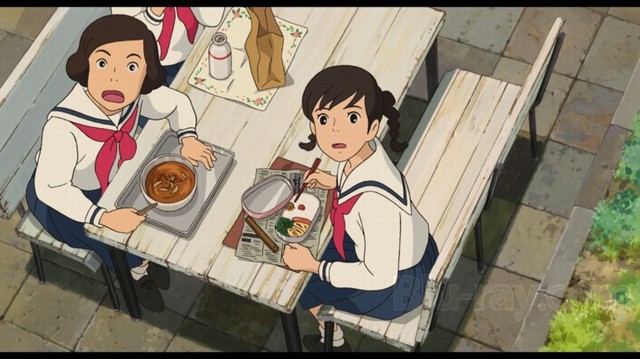 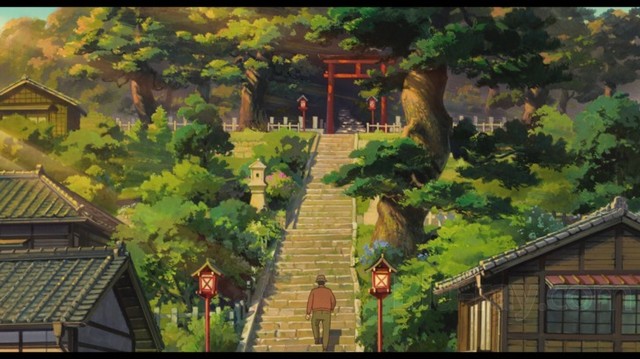 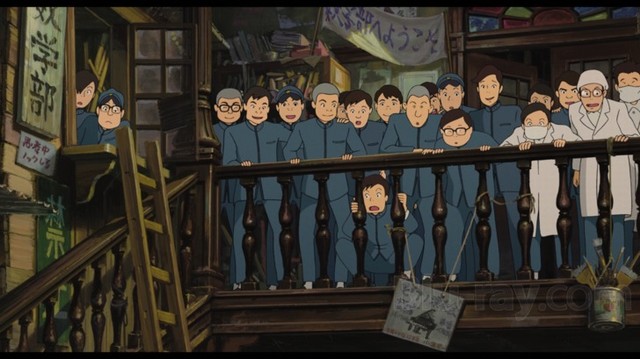 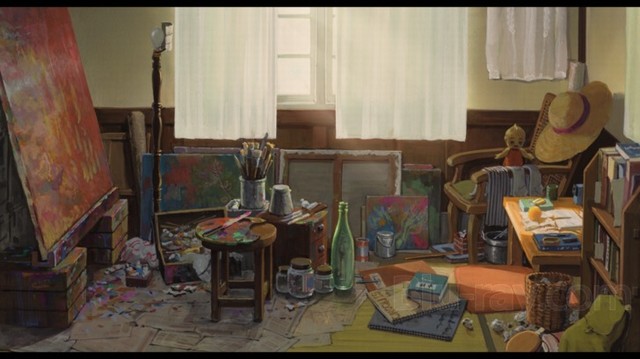 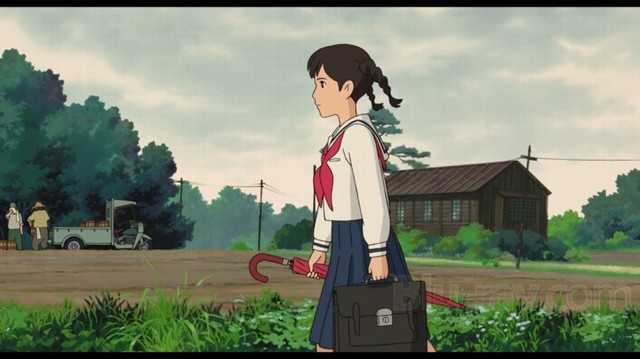