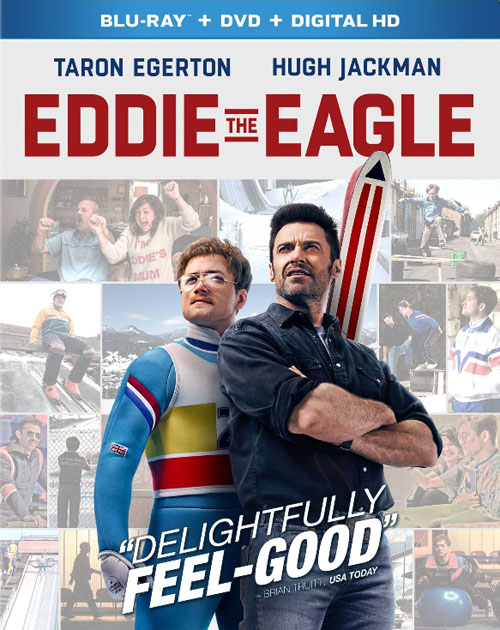 - I really wanted a commentary from real Eddie

A delightfully inspirational story that ranks right up there with Rudy.

As I watched Eddie the Eagle I was trying to remember where I was and what I was doing in 1988. I typically watch the Olympics, or at least the events that interest me, and skiing is certainly one of them, but I had no memory of the Calgary Winter Olympics or any of the drama surrounding Eddie Edwards.   Thankfully, Eddie the Eagle, now available on Blu-ray and DVD was able to fill in some gaps in my Olympic knowledge, and it did so with a delightful, heartwarming, and often humorous story 15+ years in the making.

The movie opens with what is certainly one of the top five montages of recent cinematic history as we meet ten year old Eddie practicing for the Olympic Games.   After successfully holding his breath for nearly a minute he gathers his belongings and casually tells his mom he is off to Rome to compete in the games.  As the montage continues we see an older Eddie get a knee brace removed from his leg which inspires him to advance his training to more physical sports like pole vaulting, hurdles, and the javelin; all of which end in disaster.

All the while his father looks on with disapproval wanting Eddie to focus on more realistic goals such as working for him as a plasterer. On Eddie’s first day at work he sees a downhill ski slope and a new dream is sparked.  As the montage comes to a close we find an adult Eddie (Taron Egerton) on the slopes with several other 1988 Olympic hopefuls, but after a slight mishap at a press conference Eddie is removed from consideration and told he simply isn’t “Olympic material”.

Naturally this only inspires Eddie to find another way to gain entrance to the upcoming games, and when he learns that Britain has no ski jumping team he decides to become a team of one and sets off to Germany to the premiere training camp for ski jumping. It was refreshing to see the blind ambition of a 20-something youth who travels across Europe and just walks into a training facility with no real plan, money, or anything other than a dream.  Naturally, no one takes him seriously except the kind-hearted woman who runs the pub and the groundskeeper, Bronson Perry (Hugh Jackman) who just so happens to be an ex-USA Olympic hopeful who was disgraced and kicked off the team before he could realize his own dreams. 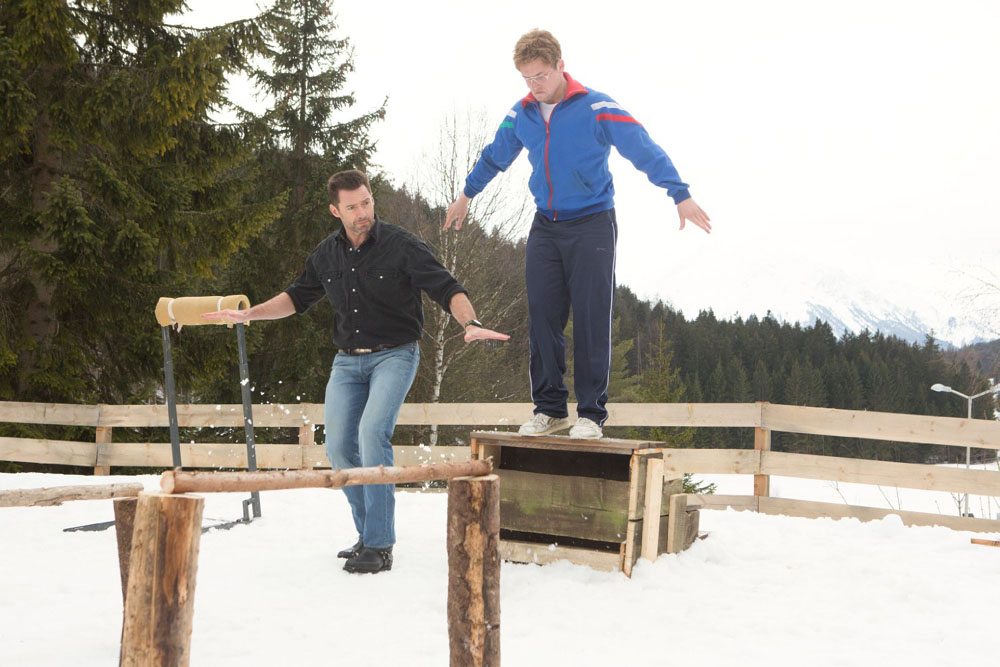 What unfolds is a bit formulaic. After considerable protest Perry agrees to teach Eddie how to land the 70m jump so he can qualify for the Calgary games at which point Britain’s Olympic committee changes the requirements (after 52 years) so Eddie cannot participate.  Eddie buckles down and manages to meet the new requirements and is reluctantly allowed to go to Canada and represent Great Britain, where is infectious enthusiasm makes him a fan and media favorite; perhaps the most famous loser in Olympic history.

The story is tightly written and the pacing of the movie is flawless with wonderful montages spread throughout to condense a year’s worth of training into an hour of entertaining film. There is an amazing chemistry between Eddie and Perry thanks to the expert performances of Egerton and Jackman.  It was also refreshing to see a somewhat realistic relationship with Eddie’s parents; the loving supportive mother and the disapproving pragmatic father who ultimately comes around in the end.  If you are a fan of other inspirational sports movies like Rudy, then you’ll know what to expect from Eddie the Eagle. 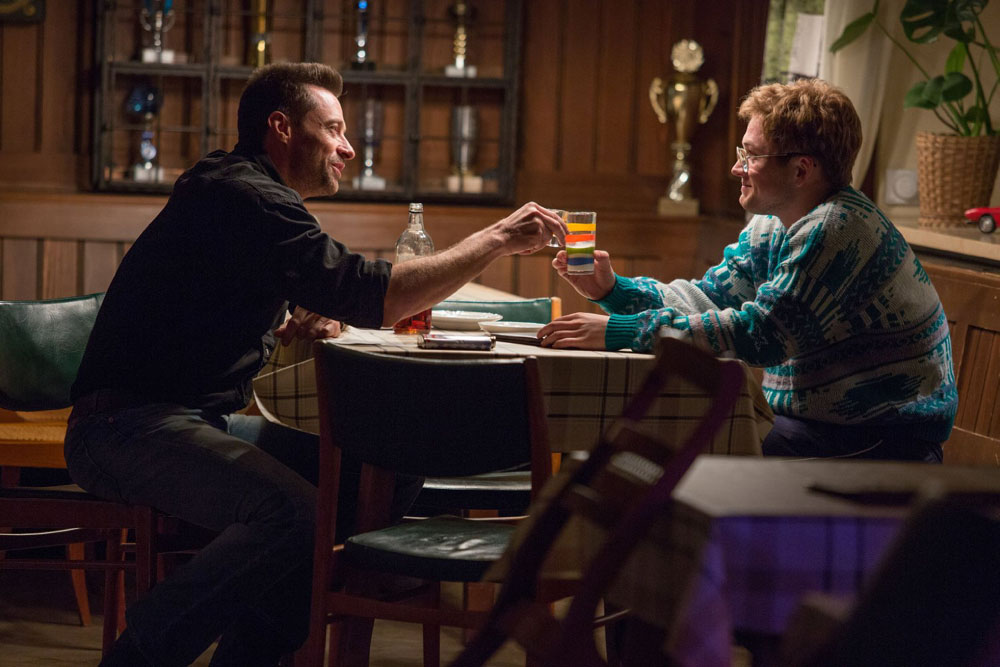 Eddie the Eagle looks amazing on Blu-ray thanks in part to being shot on the Red Epic Dragon, which brings stunning levels of detail to every frame of the film. Special cameras and rigs were created to attach to skiers or follow them down the slopes to create dramatic views we typically don’t see in sports coverage.  The scenic vistas are jaw dropping at times, and there is some nice inclusion of actual sports footage mixed in that intentionally look dated.  There is some interesting color grading on the initial montage to give that segment a home movie flavor, but overall colors are realistic, black levels are sharp, contrast is strong, and the picture is gorgeous from start to finish.

The visuals are complemented with a powerful DTS-HD MA 7.1 mix that puts you right on the mountain with Eddie. Matthew Margeson has created the perfect score using authentic synth tunes you’d expect from a classic 80’s movie creating a lot of energy and even some surprising emotional moments, and there is great use of select licensed music tracks perfect for the era.   There is nothing better than Van Halen’s Jump playing during a ski jumping competition.  The surround mix is flawless with dialogue prioritized perfectly to the front and center channels. 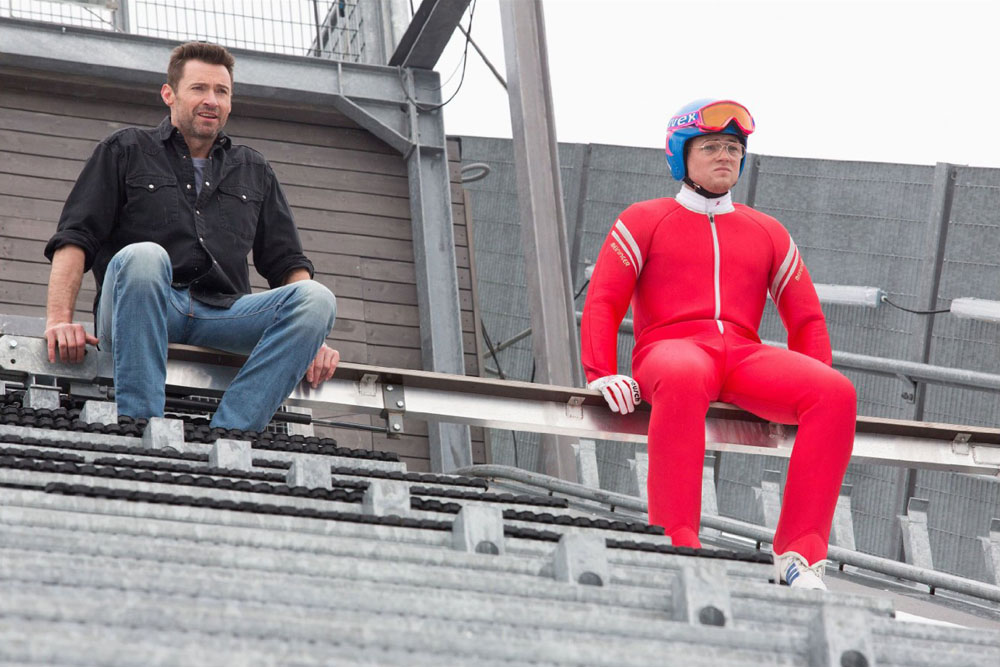 While I desperately wanted a commentary track with the real Eddie I still enjoyed the extras that were on the disc, which included more than 46 minutes of documentary coverage divided into three parts; All or Nothing: The Hero’s Heart, An Unlikely Friendship: Eddie and Perry, and Attitude is Altitude: Filming the Ski Jumps.   You’ll learn all about the making of the film dating back 15+ years to when Sony turned down the idea all the way through rewrites, casting, and filming these daring ski jumps in real life – jumps so dangerous stunt men wouldn’t even attempt them.  That is the bulk of the extras.  There is a 6-minute slideshow and a theatrical trailer, as well as a DVD and digital copy of the movie included.

I tend to cringe whenever I see the words “Based on a True Story” pop up at the beginning of a film. It’s usually going to be boring or inaccurate, and while there were certain liberties taken in Eddie the Eagle, none of them detract from the core themes of having a dream and staying dedicated to that dream no matter how much resistance you come up against.  Eddie may be a loser by Olympic standards, but he is certainly a champion and an inspiration to anyone with a dream who needs a push to see it through. 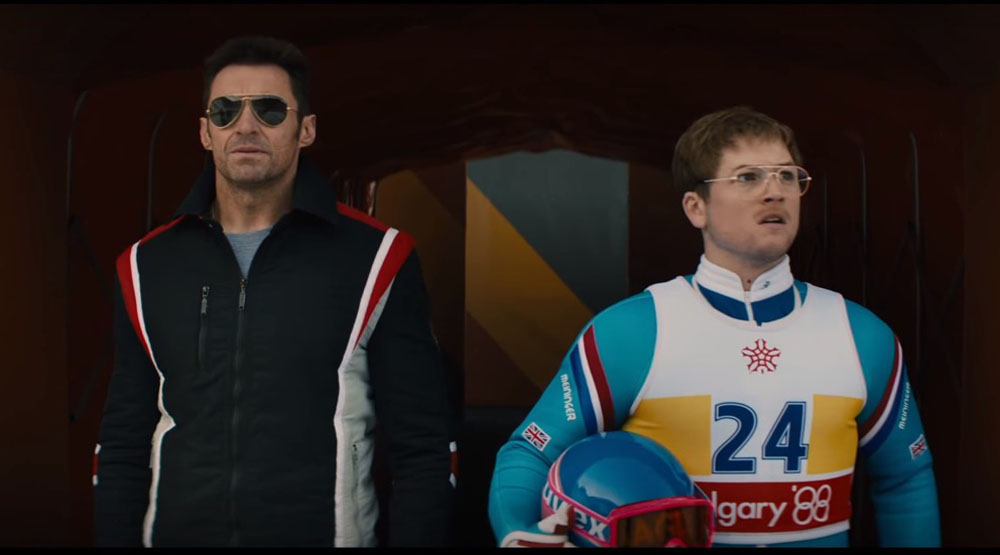