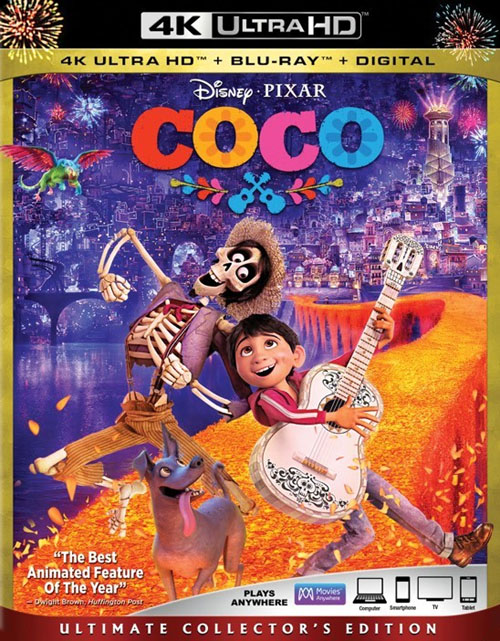 Pixar proves time after time that they can work magic with just about any type of character or any concept. Just look at that little animated desk lamp in their logo – still adorable after 32 years. Their latest feature, Coco, puts those three decades of creative expertise to the ultimate test, tackling some rather deep and emotional issues while simultaneously setting the story in the rich cultural atmosphere of the Mexican holiday, “Day of the Dead”.   Past Pixar movies have always targeted kids yet somehow managed to engage adults, but Coco seems to be going after the adult audience this time while still remaining relevant and fun for kids. The demographic, much like the focus of the story, is all about family.

In this instance it’s all about the Rivera family, a multi-generational family of shoemakers ranging from the youngest, Miguel to the oldest, Coco, the elderly great-great-grandmother of Miguel. We quickly learn that Coco’s father left her at an early age to pursue a career in music, and he became one of the most successful entertainers in the world. But Ernesto de la Cruz’s success came at the cost of a family who shunned him and music, and for generations music has been forbidden in the Rivera home. Naturally, Miguel wants to become a musician. He has an old guitar and he practices in the attic and is actually quite good, spending hours mimicking Ernesto de la Cruz from old VHS tapes. But when he announces that he wants to play at the local Day of the Dead talent show his grandmother forbids him and smashes his guitar.

Not to be dissuaded, Miguel breaks into the mausoleum to “borrow” the actual guitar of Ernesto de la Cruz so he can play the talent show but is instead, whisked away to the land of the dead where he meets up with numerous members of his long-deceased family as well as some other fun new characters. But things get serious when Miguel learns he must get a blessing so he can return home before sunrise or be trapped in this world of skeletons forever. As with all Pixar movies, there are plenty of surprises ahead, lessons to be learned, and tears to be shed.

Pixar movies usually engage me more with visuals and effects, but Coco really hooked me with a surprisingly sophisticated story that even managed to throw in a few unexpected twists I never saw coming – and it’s hard to surprise me after thousands of movies and recycled plot devices. The ultimate ending was as expected, but the path getting there was inspiringly original. There was a surprising amount of cultural material inserted into the film in a way that won’t alienate non-Mexican viewers. While not educational, preachy, or trying to serve some agenda, Coco was culturally enlightening and quite fascinating.

Disney is famous for having each new release being better than their last, so it is usually safe to say that their latest movie is their best, but sadly, that’s not the case with Coco. Watching the 4K and the standard Blu-ray versions back to back on the same night was as disappointing as it was revealing. Dolby Vision support is mysteriously gone despite earlier reports that it was going to be included, but even more questionable was the choice to master this home release in 2K, essentially making it only marginally better than the standard BD version. Honestly, my Sony 4K TV does such a fine job upconverting it was hard to tell either disc apart. The BD version may have been a bit better for casual viewers in that it was a brighter overall image, while the HDR offered deeper blacks and more vibrant colors but seemed a bit exaggerated in overall contrast. It’s hard to say the 4K version is worth $5 more, especially since you’ll need to watch the BD anyway to enjoy the bonus material.

I was excited to see Disney include a Dolby Atmos option to the sound settings, at least until I switched over to it and found the entire mix mysteriously muffled, or at least recorded at lower-than-normal levels.   While the numbers on my Denon are arbitrary to you, the reader, I typically I have to lower my volume from 72 to 68 when choosing the Atmos option, but for Coco I had to turn it up to 77 to maintain a normal listening level and be able to hear the dialogue. I didn’t notice that much separation or use of the surround channels and nothing really came from the ceiling speakers of the Atmos mix. Even the LFE was lacking, as I can’t recall a single tremble of my subwoofer, even with giant spirit animals stomping around.

Coco’s lackluster presentation is slightly compensated with a stellar collection of bonus material spread across the two non-4K discs in the set.   Included on the BD movie disc is an outstanding Audio Commentary with Director Lee Unkrich, Co-Director Adrian Molina, and Producer Darla Anderson who provide a thoroughly entertaining and educational verbal documentary of how this film was researched and assembled. Other fun extras on this disc include, Welcome to the Fiesta, a short film used to pitch Coco, Mi Familia, a ten minute look into the personal family lives of the filmmakers and more on their research in Mexico. As always, the animals steal the show in these movies and Dante is a look at how they brought our canine hero to life. How to Draw a Skeleton is a fun lesson on how to draw a signature character from the film.

Moving on to the second disc we have A Thousand Pictures A Day where the crew visits Mexico to get more immersed in the culture and take lots of reference photos. The Music of Coco dives into the movie’s authentic music and how it helps tell the story while Land of Our Ancestors is a fascinating look at the film’s visionary take on the land of the dead. Fashion Through the Ages explores the costumes and their cultural significance to the film and their basis on real Mexican clothing, and The Real Guitar is a closer look at creating the guitar seen in the film. Paths to Pixar: Coco is the traditional recruitment video that talks with several members of the creative team on how they came to work at Pixar. How to Make Papel Picado is a short lesson on crafting the Mexican decoration seen in the film and You Got the Part! shows how Anthony Gonzalez became the star of the film. There are numerous Deleted Scenes totaling 33 minutes that include an introduction from Lee Unkrich and Adrian Molina as well as numerous Trailers & Promos for the film. A Movies Anywhere digital copy code is also part of the package.

Coco is a tough review for me in that while I loved the movie for its creativity, cultural relevance, and emotional storytelling, I am reviewing more than the film; I’m reviewing a product, and this 4K home release is simply lacking in every reason why you would want to buy it. The visuals and sound are lacking; certainly not up to the standards set by previous Disney 4K releases, both live action and animated. Coco is definitely a movie you should add to your home library, but I feel the Blu-ray version does just as good a job. What minor improvements to color will likely go unnoticed by kids and most adults, so save your money because there are a lot more Disney 4K movies coming our way and hopefully they will be more technically proficient than this.

1
766
The Walking Dead: Saints & Sinners Review – Oculus Quest
2
706
Synth Riders Celebrates Anniversary with a Month Full of Treats and an Oculus Ques...
3
705
Take to the Skies and Choose a Side in the New Trailer for Next Generation Air Com...
4
705
CRASH BANDICOOT 4: IT’S ABOUT TIME IS AVAILABLE NOW
5
705
Frictional Games Shows Off First Gameplay Footage of Amnesia: Rebirth
6
704
Metamorphosis is 33% Off on Steam!
7
704
Werewolf: The Apocalypse – Heart of the Forest launches on October the 13th
8
704
Worm Jazz Review – PC
9
704
Join the Galaxy’s Finest as Star Wars™: Squadrons Soars Into Homes Today
10
704
The Falconeer First-Look Preview – PC
All Original Content on Game Chronicles is Copyright (c) 2002-2020
Sinjin Solves Walkthroughs Copyright (c) 1996-2020 by Mark Smith