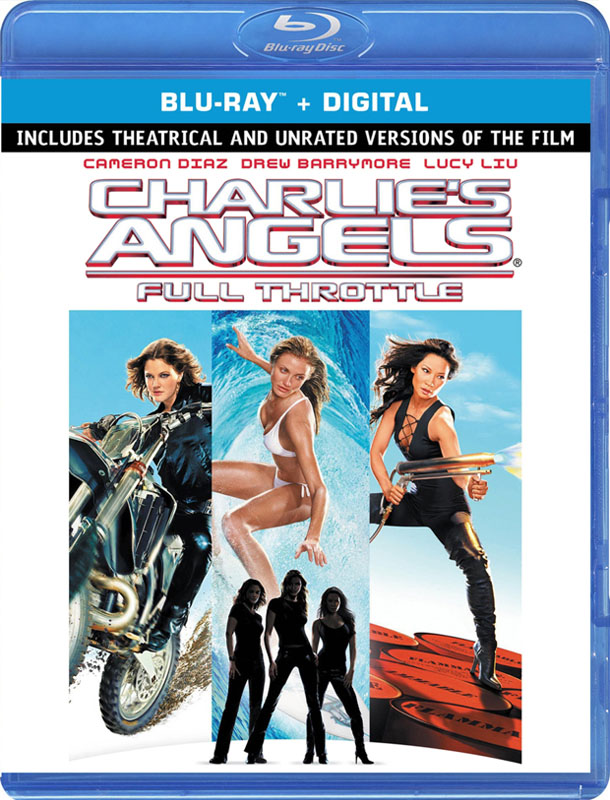 Maybe worth it if this is your first copy otherwise wait/hope for a 4K/UHD edition.

I was a big fan of the original Charlies Angels TV series that aired from 1976-1981. I was the quintessential 12-17 year old hormonal teen at the time; their target audience and sucker for all the posters, fan mags, etc. and managed to stick with the show through the years as various Angels got replaced with new actresses, so it wasn’t a huge leap when Drew Barrymore teamed up with McG to reboot the franchise in 2000 and follow it up with a sequel in 2003. It is those two movies that have just been re-released; the original to a stunning 4K/UHD edition and the sequel to the Blu-ray I’m reviewing here.

Charlie’s Angels: Full Throttle is easily the superior movie between the two, which only begs the questions, “Where is the 4K release?” Clearly the only reason this edition even exists is to coincide with the 4K edition of the original film and to support the new reboot of Charlies Angels coming soon to theaters. There is even a 2-minute clip of the new movie in the bonus section, but they should have included some movie cash to get people into theaters because judging from this clip alone, Elizabeth Banks is about to destroy one of my favorite franchises.

McG is one of my favorite directors, and while I don’t go out actively searching for his stuff whenever I see his name pop-up on a TV show or movie it’s kind of like that seal of approval that you’re about to have a great time. McG got his start with commercials and music videos as you’ll clearly notice mere moments into this film. The entire movie is basically a montage of action, comedy, and a few dramatic moments, all about 10-15 minutes long, all with their own signature soundtrack, and all miraculously coming together to tell a cohesive story. One minute you’re in this Russian bar, the next you’re posing as CSI agents investigating a murder before heading to a California beach to go surfing, then you’re off to an underground motocross event or posing as nuns at the Playboy Mansion that’s posing as a convent/orphanage or maybe doing some surveillance as ship welders before slipping into something more comfortable to dance with the Pussycat Dolls. This is truly a compilation sketch movie for those with short or no attention spans and I love it.

Yes, there is an underlying backstory that shouldn’t need recapping after 16 years but basically somebody has stolen these two rings that when combined can unlock a list of everyone in witness protection. There are almost too many cameos and guest stars to count including an almost unrecognizable Bruce Willis, a stunning Demi Moore and perhaps an even more stunning Jaclyn Smith reprising her Kelly Garrett character. Bernie Mac tries to replace Bill Murray as Bosley and fails, and Crispin Glover returns as the still-creepy Thin Man who we learn much more about with some exposition from Carrie Fisher.   Of course the movie would be incomplete without our angelic trio; Natalie (Cameron Diaz), Alex (Lucy Liu), and Dylan (Drew Barrymore), all just as gorgeous and committed to their characters as before; perhaps more so, as they are clearly doing most of their own stunts to really sell the action.

Shot on 35mm, this would have been the perfect source material to scan into a 4K master. Just look at how awesome the original movie turned out on 4K. But even at a lowly 1080p Charlie’s Angels: Full Throttle still shines with some super-sharp textures, minimal film grain, and some eye-popping colors. Colors are accurate, especially skin tones that are shown in extreme facial close-ups as well as gorgeous lighting for interior sets and outdoor environments. There are some fun camera shots including a cleverly edited “single-shot” at the beginning and plenty of McG’s famous whip-pans and flash-zooms. The film has never looked this good, which only had me thinking how much better it would be in UHD with HDR support.

There’s no Dolby Atmos or 7.1 mix here; just a fairly standard and competent DTS-HD MA 5.1 presentation that gets the job done, making the most with most of the speakers in my Atmos home theater. Without the side channels in play the surround transitions seemed rather abrupt going from front to back. The dialogue was perfectly mixed and balanced to front and center and was never overwhelmed by the sound effects or non-stop montage of licensed music. There were plenty of explosions and some thumping bass on the soundtrack to keep my subwoofer working overtime.

Charlie’s Angels: Full Throttle goes crazy with the extras to the point where you will need to watch the movie at least three times to experience it all. Plus you get the theatrical cut and an unrated version, although I couldn’t see any differences. The first and likely biggest bonus feature as far as the studio is concerned is a two-minute clip from the new Charlie’s Angles movie coming to theaters November 15th. I was seriously not impressed with the cast or the overall theme and tone of the new film; at least from what I saw in the clip. Charlie’s Angles has always been about “girl power”, but this has “Get Woke Go Broke” written all over it.

There are four feature-length tracks tied to the theatrical cut; the first being McG’s Telestrator Commentary where you get to hear the director talk about the movie while marking up the screen like John Madden used to do during football games. If you don’t like the white markings you can simply opt for the standard McG’s Commentary – it’s the same audio track minus the markings. There is a lot of interesting information and stories in this track and McG manages to maintain a steady pace and flow to keep it entertaining. For something a bit more casual check out the Writers’ Commentary where John August, Cormac Wibberley, and Marianne Wibberley all discuss the movie, both as fans and as writers. The final feature track is Angel-Vision Trivia where all sorts of trivia pops-up on the screen while you watch the film.

There are a bunch of features that made it over from the original DVD release; nothing updated or enhanced and a lot of it not too pretty on a 4K display. Some pieces play in 4×3 like it was shot on VHS and most of it is interlaced so there are plenty of jagged edges and overall fuzziness to the image. Up first is Pussycat Dolls, a short look at the dance troupe and how the angels committed to their parts. Rolling with the Punches discusses the girls’ commitment to the action sequences and how their training for the first film carried over into the sequel. XXX-Treme Angels goes into detail on the Motocross sequence with several interviews with riders who appeared in the film, and Full Throttle: The Cars showcases McG’s love of cars and his commitment to including the classics as well as the very latest rides. Designing Angels: The Look goes into the nuances of cinematography and lighting to keep our girls looking angelic. There’s No Such Thing as a Short Shot, Only an Overworked Producer is a brief look at the challenges of scheduling and orchestrating a complex movie production. Angels Makeover: Hansen Dam shows how matte paintings were used to turn a flat dam in Northern LA into what we see in the movie’s opening. Angel Scouts looks into scouting out the perfect locations for the movie while Dream Duds showcases the movie’s wardrobe using sketches, photos, and film clips.

The list goes on with Cameo-Graphy that highlights the many cameos in the film. Included are Bruce Willis, Béla Károlyi, Robert Forster, Eric Bogosian, Andrew Wilson, Pink, Eve, Mary-Kate & Ashley Olson, Carrie Fisher, The Pussycat Dolls, Chris Pontius, Ed Robertson, Big Boy, and Jaclyn Smith. Full Throttle Jukebox has McG and Music Supervisor John Houlihan discussing the song selection for the movie along with clips from the scene in which they appear. Included are; “Sleep Now in the Fire” by Rage Against the Machine, “Surfer Girl” by The Beach Boys, “Feel Good Time” by Pink Featuring William Orbit, “U Can’t Touch This” by MC Hammer, “Danger! High Voltage” by Electric Six, “Nuthin’ but a ‘G’ Thang” by Dr. Dre, “The Pink Panther” by Hollywood Studio Orchestra, “A Girl Like You” by Edwin Collins, “Any Way You Want It” by Journey, “Firestarter” by Prodigy, and “Saturday Night’s Alright (For Fighting)” by Nickleback Featuring Kid Rock. Angels Film School is one of my favorite extras with useful info for those looking to work in film.   You’ll get a great look at the inner-workings of how a movie is made. Included are #1 – First Assistant Director, #2 – Script Supervisor, #3 – Storyboard Artist, #4 – Creative Advertising, #5 – Special Effects Supervisor, #6 – Visual Effects Supervisor, #7 – Driver, and #8 – Stunts. Topping off this mountain of movie extras is a Music Video for “Feel Good Time” by Pink Featuring William Orbit and some Trailers including a Teaser Trailer and Theatrical Trailer.

Charlie’s Angels: Full Throttle is a fun movie to watch with pretty girls, great action, awesome fights, cool cars, and a careless disregard for any type of serious story. The short sequences are practically standalone in their design yet manage to tell a complete, albeit thin, story with a satisfying ending. The audio and visual quality is about as good as you can expect for Blu-ray, and while I desperately wanted to see this in 4K I seriously doubt Full Throttle will ever get another release. For only $10, if you don’t already own a copy then now is your chance.