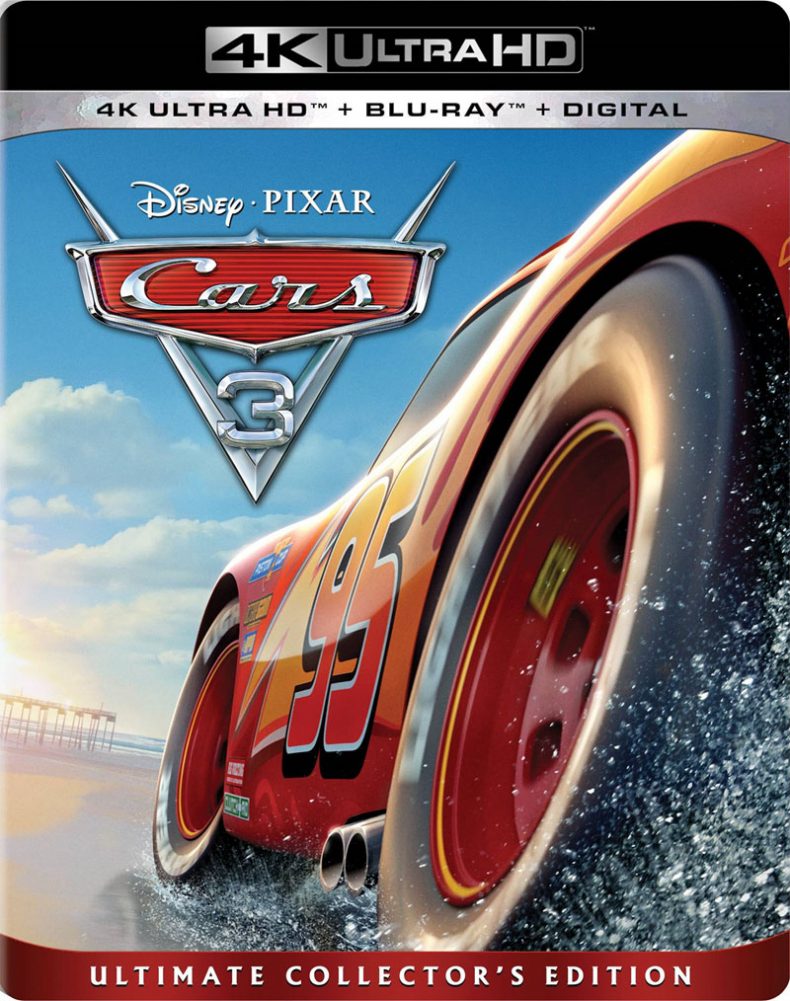 - Audio defaults to 5.1
- Commentary only on BD

Cars is one of my top five Pixar films of all-time while Cars 2 is one of my bottom three, so the franchise had nowhere to go but up in my personal rankings, but I had no idea just how good the third installment could (or would) actually be. With a solid theatrical release earlier this year and now a perfectly timed pre-holiday release for the DVD/BD/4K along with all the licensed merch preparing to park under millions of Christmas Trees next month, Disney effortlessly positions Cars to be one of the most lucrative franchises of the year.

While I’m not sure if Cars was always destined to be a trilogy, this third installment seems to close the book on the franchise, or at best usher in the launch of a girl-powered spin-off. We catch up to Lightning McQueen (Owen Wilson) at the precipice of his career. A new generation of racecar has found its way to the racing circuit, and with top speeds more than 20mph faster than the aging McQueen, #95 is getting left behind in the proverbial dust.   In a singular moment of desperation/determination Lightning pushes his limits, blows a tire, and becomes part of a rather scary crash sequence.   Four months later, after some extensive body work and personal time to reflect, McQueen decides to make one final attempt to compete with cars entirely out of his league.

Cars 3 has lots of underlying themes and lessons woven into this surprisingly dramatic story, and even more impressive is just how realistically they are presented. All too often in these inspirational films kids are told “you can do anything” or “you can be anything” or “determination conquers all”, but as in real life, McQueen simply lacks the physical/mechanical ability to keep up with these next-gen racers. Much of the film deals with McQueen realizing and coming to terms with this, and concludes with how he chooses to deal with it…the old making lemonade from lemons cliché.

I really enjoyed how McQueen’s story seemed to mirror that of his old mentor, Doc Hudson (Paul Newman), and how the writers were able to tie in McQueen’s current story by exploring Doc’s past for a solution. But there is a fairly involved second act to get through first; one that involves a new boss, Sterling (Nathan Fillion), and Lightning’s new gung-ho race trainer, Cruz Ramirez (Cristela Alonzo). It’s during this central part of the film where Cruz slowly moves to the front of the story as the inevitable replacement for #95.

Cars 3 marks the first animated film to join the impressive 4K library of Disney movies, and it sets the bar impossibly high across the board.   While the Blu-ray is impressive as is – something you can experience when watching the bonus commentary – the 4K disc delivers an even more refined image void of any aliasing or color banding.   The environments – especially in the numerous road trip sequences – look like actual 4K aerial photography shot for a documentary, and moving in close we get to see immaculate detail in modeling and textures.

Reflections in paint, water, and glass, and especially small things like rubber particles on the track or water and mud at the demolition derby, or even the sandy particles during the beach racing in Florida blur the lines of animation and real-life.   The HDR color palette is used to great effect. There is no red bleed on McQueen’s vibrant new skin, so detailed you can see the metal flakes in the paint, and the range of yellow from Cruz to killer school bus is impressive. Contrast and HDR darkness levels are impressive, as clearly shown in a moonlit race through the woods. As far as color and brightness are concerned, this is HDR and UHD reference material.

Make sure you don’t miss out on the outstanding Dolby Atmos mix, especially since the 4K disc curiously defaults to the 5.1 mix, forcing you to visit the audio options to manual select the 7.2.4 option. For those with Atmos-equipped home theaters prepare for an impressive and immersive audio experience that will put you right into the film. Admittedly, there was only one scene in the film to make use of the overhead channels, so when McQueen is in his trailer during the rain storm enjoy the sound of raindrops over your head. The rest of the immersion relies on the positional audio of all the various racecars as they fly around the track passing or getting passed by Cruz and McQueen. The rest of the mix is pure perfection with an evenly balanced mix of music, effects, and prioritized vocals so you don’t miss a word of the dialogue.

This Ultimate Collector’s Edition comes loaded with plenty of bonus extras, none of which are on the actual 4K disc. Spread across both the standard BD and a separate bonus disc you’ll find an informative and collaborative Commentary track with Director Brian Fee, Producer Kevin Reher, Co-Producer Andrea Warren, and Creative Director Jay Ward. Pixar’s theatrical short, Lou is a charming appetizer for the feature presentation or a nice desert depending on when you watch it. Miss Fritter’s Racing Skoool is a fun commercial targeting aging cars, while Ready for the Race features a discussion with real-world racer William Byron. Cruz Ramirez: The Yellow Car That Could digs deeper into the new and perhaps real star of Cars 3.

Moving on to the second disc there is a 5-part Behind the Scenes documentary covering the story and creation of this third installment, a detailed look at the demolition derby sequence, a short piece on the toys of Cars 3 (don’t let your kids watch this) as well as a look at how the filmmakers studied auto racing to make it realistic for the film and finally a short piece on the brands and logo designs used in the film. The Fly Throughs are a fantastic way to explore the stunning scenery in the film and My First Car talks with various cast and crew on their first cars.   There are 26 minutes of Deleted Scenes with optional intro from Brian Fee and several Trailers for upcoming projects. Promos is the final extra giving you up-close looks at featured cars from the movie. A Digital Copy of the movie lets you enjoy Cars 3 on your favorite mobile device, and I can certainly vouch for the iTunes copy that looks insanely good on my new iPhone 8+.

If Cars 3 is the final movie in the franchise then I’m happy with the way it wrapped up, and if Disney wants to spin the series towards a female audience then I’m more than happy to explore the future career of Cruz Ramirez.   The world of Cars is a magical place and home to untapped story potential, and with Pixar’s ability to create fantastic and engaging content, and Disney’s technical ability to deliver that content on stunning 4K reference quality discs, I can’t wait to see what’s next. Until then, Cars 3 definitely takes the checkered flag of my 4K library.