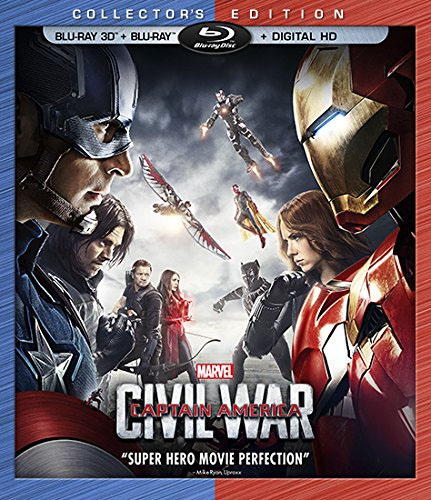 - Poor LFE and quiet dialog
- Aliasing issues on HD screens
- Moment when you realize the whole thing is just one man's revenge plot.

Despite a few minor flaws Captain America: Civil War is another great installment in the MCU.

There’s a war brewing in the world of comics, and it’s not just DC vs. Marvel.   As the Marvel cinematic universe (MCU) continues to build up to the Infinity War climax in 2019 we have plenty of new heroes to meet as well as some ensemble stories to get through, and none of them have been as highly anticipated as Captain America: Civil War.  After all, we are only one Norse god and a green guy with anger management issues short of an Avengers movie here, but after their last group outing in Ultron, I think we can all agree that Ant Man and Spidey are more than adequate replacements.  They certainly offer much greater comedic potential to the script and cast.

The MCU prides itself on flawless continuity so this latest film picks up shortly after the events in Ultron, but not before the obligatory WWII flashback tease of Bucky getting brainwashed to track down and hijack a batch of Winter Soldier serum.  When we return to the present we join our Avengers already in mid-mission trying to thwart the theft of a deadly bioweapon.  While their mission is technically a success it doesn’t come without collateral casualties, which causes the rest of the world to rise up and demand some UN oversight into how, when, and where the Avengers can engage in future world affairs.

Tony Stark/Iron Man (Robert Downey Jr.) understands the need for such extreme measures but Steve Rogers/Captain America (Chris Evans) still remembers a time where such oversight wasn’t such a good thing and does his best to resist signing the UN’s new proposal, going as far as splitting up the team creating their own private “civil war”.  What none of them realize is that all of this internal strife is being meticulously orchestrated by an evil genius who is out for revenge after his wife and daughter were killed when the city fell from the sky in Ultron.  He frames Bucky for a UN attack, which only helps drive a wedge deeper between Stark and Rogers, as Steve goes off to find Bucky and prove his innocence while Tony takes his team to try and capture him.  And even when the two opposing heroes seem to mend their fences in the final act, a startling revelation brings the fight back to full intensity for the climactic confrontation.

For as much as I enjoyed this movie the two times I saw it in theaters and the first time I watched it on Blu-ray, it seems that with each viewing I enjoy it a little bit less.  At 148 minutes, this is a long movie with a disproportional amount of action to story.  The first time (or two) you are engaged by the narrative, but on future viewings you’ll squirm in your seat while you wait for that unforgettable airport fight or Bucky’s escape from his apartment or the Siberian smack down at the end.   After watching the movie from start to finish once, then again with commentary; when it came time to view the 3D version I’ll admit to skipping around to my favorite parts.

Despite some overall pacing issues, each character is allowed to shine as we explore the awkward relationship between Vision (Paul Bettany) and Scarlet Witch (Elizabeth Olsen), do a VR dive into Tony’s troubled childhood, and even meet a new web-slinging hero from Queens.  The film assumes you’ve already seen Ant Man, as Paul Rudd tumbles out of a van with virtually no backstory and only a brief acknowledgement of his prior encounter with Falcon (Anthony Mackie) in his own movie.   The biggest addition to the cast is Black Panther (Chadwick Boseman), who will be getting his own movie next year, and after the post-credit teaser I wonder if Captain America will turn up in that film.

Captain America: Civil War boasts some impressive visuals in both the standard and 3D versions of the film included in this collector’s edition.  The 2D version offers the superior image with crisp detail, sharp contrast, deep blacks, and rich vibrant colors, despite some aggressive color correction in post that keeps everything overcast and moody.  Every last detail is visible from the brushed metal in Cap’s shield to the battle scars on Tony’s suit.  The movie upconverts nicely into 4K on my Sony UHD, which also helps to mask some aliasing issues evident on non-4K screens, but I can only wonder how much more awesome this film would have been in true 4K UHD.

The 3D version delivers some impressive moments in 3D but usually not the ones you want or expect.  In general, there is a nice depth to the image as the picture sinks beyond your screen surface, but nothing really ever pops out at you, and things that should be in 3D, like Cap’s ricocheting shield, never are or at least is moving too fast to notice.  Aliasing is even more severe in 3D on non-4 displays, but 4K upscaling helps fix this.  One notable perk to the 3D version is the airport fight, which does open up to the full frame IMAX experience from the theater and is totally awesome.

Both the 2D and 3D versions offer up an intense DTS MA 7.1 audio mix that will drop you right in the middle of this civil war.  There is great use of the multi-channel surround to create a 3D aural environment but the LFE is greatly lacking and the action scenes suffer slightly from lack of punch and power during combat and subsequent explosions.  The dialogue is nicely prioritized front and center but there are some issues when people start talking at lower-than-normal conversation levels, forcing you to turn it up then quickly turn it back down when something loud happens.  Much like 4K video, Civil War would have greatly benefited from the Dolby Atmos treatment.

The Captain America: Civil War Collector’s Edition comes with both the 2D and 3D versions of the film as well as a digital copy that looks great on my iPad.  The 2D version of the film is loaded with bonus content including; United We Stand, Divided We Fall — The Making of Captain America: Civil War, a two-part, 45-minute documentary that exhaustively covers just about everything you would want to know about the stars of the film and how it was made. Chris Evans gets his own feature in the 4-minute Captain America: The Road to Civil War, and Robert Downey Jr. gets equal time in his own person bio, Iron Man: The Road to Civil War. Next up are four Deleted Scenes, a 3-minute Gag Reel, and of course the feature Audio Commentary with Directors Anthony & Joe Russo and Writers Christopher Markus & Stephen McFeely who offer up some insightful fun facts about the film. The final heavily advertised bonus feature in this bundle is the 4-minute look into Marvel’s next feature film, Open Your Mind: Marvel’s Doctor Strange — Exclusive Sneak Peek. I’ll admit to not being very interested in this movie prior to watching this content, but not I’m pretty stoked.

If you own a 3D capable TV then Captain America: Civil War Collector’s Edition is pretty much your go to SKU for this release.  3D movies are becoming less of a thing these days and newer 4K TV’s aren’t even supporting 3D anymore, so enjoy it while it lasts.  In the case of this movie, it’s the only way you get to see the airport sequence in its expanded full-frame glory.  Disney continues to crank out the hits and despite a few minor flaws Captain America: Civil War Collector’s Edition is yet another trophy in their Blu-ray Hall of Fame.