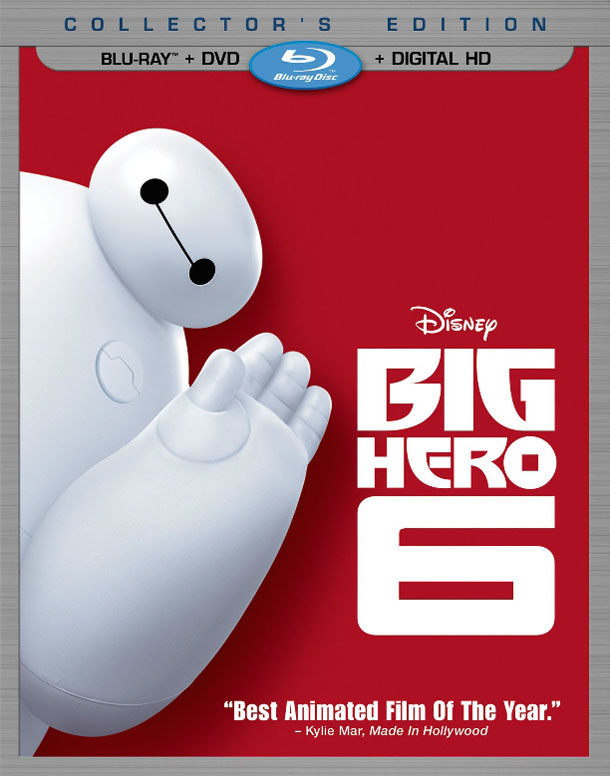 Minimal bonus content and no second screen or commentary

Pure perfection of animation and storytelling and one of the best action-adventures of our time.

Disney continues to capitalize on their lucrative purchase of Marvel with their fantastic new animated feature, Big Hero 6.  I’ll be the first to admit I know nothing about the comic book this film is based, but in watching some of the bonus material it seems there was enough creative license taken with the original content that it doesn’t really matter.   The bottom line is that this movie is one of the most endearing and entertaining animated features since The Incredibles.

Our story begins with the introduction of Hiro (Ryan Potter), a young boy genius living in San Fransokyo who uses his advanced knowledge of robotics to build fighting bots so he can hustle cash in underground robot fight clubs.  His brother, Tadashi (Daniel Henney) is also a robotics wizard who works at the local university using his skills to build a next-gen healthcare bot, Baymax (Scott Adsit). In an effort to steer Hiro to a more productive future, Tadashi takes him to his “nerd lab” where he meets Tadashi’s friends and coworkers; Fred (T.J. Miller), Go Go (Jamie Chung), Wasabi (Damon Wayans Jr.), and Honey Lemon (Genesis Rodriguez). But when Professor Callaghan (James Cromwell) drops by the lab and challenges Hiro to invent something special to prove he is worthy to join the team, only then does he set out to create something truly remarkable.

Hiro invention; tiny robots that act in unison and controlled by human thought – almost like nano bots – easily steals the show at the university science fair as well as attracting the interest of a suspicious business tycoon who offers to purchase the robots. Hiro refuses to sell and almost immediately disaster strikes. The science fair and his invention are destroyed by a fire that also takes the life of Tadashi. Hiro spirals into a deep depression until he inadvertently activates Baymax who has been stashed away on his brother’s side of the room.

Thus begins a truly remarkable and emotional story where Baymax not only becomes a super-hero but also protector and surrogate brother to Hiro.   Baymax exhibits all the childlike wonder and innocence of WALL-E, as Hiro slowly evolves the inflatable healthcare bot into a powerful armored warrior not entirely unlike Ironman.   As Hiro is teaching Baymax to become a hero Baymax is slowly getting Hiro to open up and rejoin society, and just in time too since it turns out that Hiro’s robots have been stolen, mass produced, and are about to be used by an evil villain. When that villain turns out to be more than a match for Hiro and Baymax alone, he must recruit Tadashi’s eclectic group of friends to form Big Hero 6 to save the city.

What impressed me most with the presentation of this film was just how opposite the extremes.   You have some of the most realistic CG set designs and cityscapes ever seen in a film. The new Hyperion engine used to render and light San Fransokyo took three years to do so, but the results are jaw dropping, with many of the city scenes easily mistakable for actual video. And then all of this stunning reality is juxtaposed with perhaps the most simplistic character ever used in a Disney animated feature. Baymax is basically a humanoid balloon animal that moves like a baby with a full diaper yet somehow can generate human expressions and emotions with two dots and a line that connects them. Admittedly, things do get a bit more complex once Hiro starts slapping on the carbon-fiber armor and self-propelled rocket fist.

Disney knows that no story works unless you care about the characters, and Big Hero 6 has plenty, yet somehow each and every one gets their moment to shine thanks to very unique character designs, animation styles, and some inspired casting for their voice actors. T.J. Miller’s voice is so unique and I see him on so many other shows that it was a bit distracting at first, but thankfully the artists actually created a character that looked a lot like him, so there wasn’t the expected disconnect. The rest of the cast all created deep characters that I enjoyed following and wanted to learn more about – a solid foundation for lots of sequels.

As for the technical aspects of this Blu-ray release, the 1080p transfer is flawless and only gets better when up-converted on my 4K HDTV. Character design is fantastic with a few nods to the basic style found in The Incredibles, only with a lot more variety and detail. The aforementioned Hyperion engine creates some of the most lifelike cityscapes and backgrounds of any animated feature to date. Your eyes won’t be the only thing dazzled by the presentation. The DTS-HD MA 7.1 soundtrack is the perfect balance of energetic action music, powerful LFE, and rich vibrant surround sound coming from every channel in your home theater setup. Dialogue is prioritized and balanced to the front and center so you don’t miss a single word. The Blu-ray version of the film is reference quality when it comes to audio and video. The only way it could be better was if it had been mastered in 4K.

Ironic and sad, Big Hero 6 can’t even muster six bonus features to give the Blu-ray some added value. What is included is quite good, but with a movie this significant and this good we need more. Disney seems to have abandoned their second screen support and commentary tracks have been absent from nearly all of their releases in the past year.  What we do get kicks off with the adorable Theatrical Short: Feast that was shown in theaters. Dog lovers will certainly smile when they watch this enchanting film from Director Patrick Osborne. The Origin of Big Hero 6: Hiro’s Journey is a 15-minute behind-the-scenes look hosted by Jamie Chung that covers numerous facets of taking this tale from comic book to big screen. Big Animator 6: The Characters Behind the Characters is a 6-minute roundtable discussion with the visionary artists who brought this animated cast to life and Deleted Scenes with Introductions by Directors Don Hall & Chris Williams includes two alternate openings and two cut scenes that never made it out of the storyboard process.   All that’s left is the original Theatrical Trailer, but your Collector’s Edition also comes with a standard DVD copy and a digital download copy that includes iTunes – and this movie looks awesome on an iPad retina display.

Big Hero 6 just won the Oscar for best animated film and it certainly won my heart for favorite Disney movie; animated or otherwise, in quite some time. I had been eagerly awaiting a sequel to The Incredibles all these years, but Hiro, Baymax, and his team have sparked new life into the animated superhero genre, and I look forward to many more sequels and exciting tales featuring these endearing and unforgettable characters. Big Hero 6 is not only pure perfection of animation and storytelling; it is easily one of the best action-adventure, comic book-inspired films of our time, and in many ways better than Guardians of the Galaxy. It certainly has more heart.