Beauty and the Beast Blu-ray Review 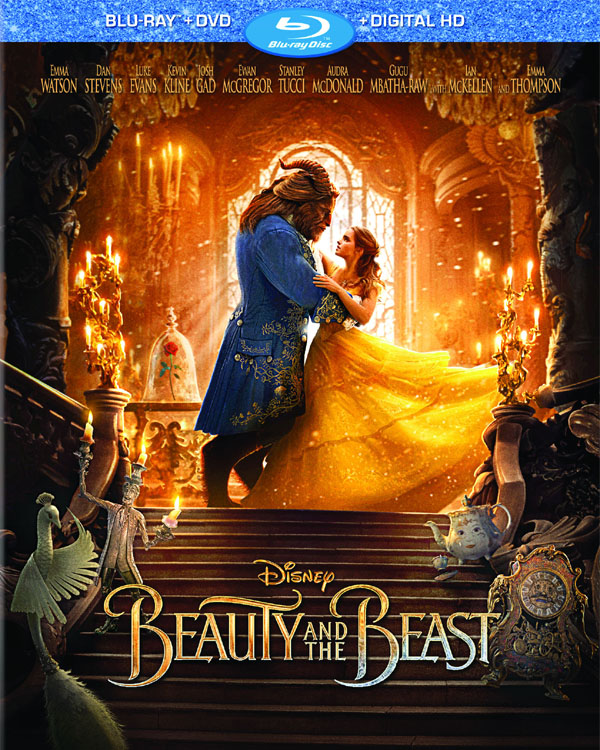 A magical retelling destined to become as timeless as the original.

I admit to being a bit skeptical when Disney announced they were going to start remaking several of their timeless animated classics using live action, but last year’s release of the Jungle Book was an impressive first step in changing this cynics view on the matter, and now with the release of the live action Beauty and the Beast I am totally onboard. Much like Jungle Book, the filmmakers chose to preserve the original story beat for beat, admittedly with a few embellishments, but rest assured all of the original music is back along with a few new songs destined to become as iconic as the classic sing-a-long favorites.

The movie opens with a storybook prologue showing us how the Prince (Dan Stevens) was turned into the beast and his staff into living household items, then we are whisked away to a cheerfully sunny French village where we meet Belle (Emma Watson) who breaks out into the first musical number along with several members of the village. It sets the stage for the rest of the movie, which quickly become one rapid-fire musical number after another with only brief moments of actual acting and dialogue and fewer moments of action; at least until the end. Despite the odd pacing and my general dislike for musicals, this movie was extremely engaging since the songs were being used as the main device to drive the plot forward.

Belle dreams of a better life than what her village can offer and frequently escapes into books, although her town library is rather limited on reading material, which plays a key role later in the film. When she’s not reading she takes after her father (Kevin Kline) as an inventor coming up with clever ways to do the laundry as well as fending off the unwelcome advances of the lecherous Gaston (Luke Evans) who every girl in town wants…except for Belle.

One day her father leaves town for business and stumbles across a strange wintery section of the forest that leads him to the Beast’s castle. He’s caught “stealing” a rose and the Beast imprisons him for life. Belle sets off to rescue him and offers herself up in exchange for her father’s freedom, taking his place as a lifelong prisoner; soon to be house guest when the living bits of furniture realize Belle may be the one to break the curse. This ushers in the second act where Belle is wined and dined and is invited to dance in the grand ballroom in the film’s signature scene. The Beast even gives her a massive library with more book than she could read in a dozen lifetimes.

Naturally, Belle falls in love with the Beast just about the time a jealous Gaston arrives to kill his competition, setting up the exciting climax to the film. Will Belle be able to break the curse before the last rose petal falls and decays?   Of course; this is Disney. While the ending won’t be a surprise there are a few surprise additions to the film; the big two being the opening with the Prince’s backstory, and a short sequence in the middle where the Beast uses a magic map to transport Belle to Paris to discover the fate of her mother – something her father refuses to share. There are also two new musical numbers added to the mix, and both fit the story perfectly.

The transition to live action was flawless with a perfect mix of expert casting, magical set design, and some incredible CG effects to bring the servant characters to life. Emma Watson is the perfect embodiment of Belle surpassed only by Luke Evans’ totally committed immersion into the character of Gaston. Dan Stevens was the perfect Beast; an impressive feat considering he had to act and dance on stilts in a motion-capture suit and then perform all his lines over again at a later date for facial capture, but the results speak for themselves as the Beast is one of the most emotive CG characters to date.

Disney’s fantastic 1080p transfer does a wonderful job capturing all the fantastic detail of the CG as well as the intricately designed sets and gorgeous costumes. The film presents two distinct moods of the dark and forbidden castle and the sunny world of Belle and her village, alive with color and bustling with activity. Beauty and the Beast is in desperate need of an HDR 4K treatment; especially for the dark scenes in the castle where some of the detail can get lost in the shadows. The overly dark final two acts do allow for some excellent lighting opportunities, especially in the signature Be Our Guest dinner scene. I was impressed with the filmmakers’ restraint on use of green screen, which was pretty much used only for set extensions. Almost everything you see in the foreground was meticulously handcrafted.

The DTS-HD MA 7.1 sound mix does an impressive job of immersing you in the film with perfectly prioritized dialogue and song lyrics and a spatial mix that makes great use of all surround channels. The level of sound layering and effects brings every set to life whether we are walking through Belle’s village, riding through a wolf-infested forest, or exploring the dark and forbidden West Wing of the castle…perfect sound as always.

The only thing missing from the excellent set of bonus offerings is a feature commentary, but Beauty and the Beast has pretty much everything else you could want including several featurettes, a few deleted scenes, and a number of musical extras. There is an optional three-minute overture you can choose to watch when starting the film and the sing-along mode is sure to delight the kids with karaoke-style lyrics on the screen during the musical numbers. A standard DVD copy of the film as well as a Disney digital copy code also come with the Blu-ray.

Diving into the bonus menu we start with the Enchanted Table Read where the cast assembles to read and perform the script with much more effort and commitment that we’ve seen in similar table reads. It’s interesting to see the entire movie condensed down to 13 minutes as well as the emotional response of the actors this early into production. Next up is the 27-minute making-of feature, A Beauty of a Tale that explores the various aspects of recreating this live-action version of the film as well as interviews with cast and crew.   The Women Behind Beauty and the Beast is a five minute collection of interviews with Emma Watson and other members of the female-dominate production staff and how they influenced the movie. Next up are six minutes of Deleted Scenes, introduced by Director Bill Condon and presented with existing footage so you know where they would have appeared if they had been left in.

The rest of the extras are all music related starting with From Song to Screen: Making the Musical Sequences, a 13 minutes look on the creation of all the major musical moments in the film complete with behind-the-scenes footage and cast and crew interviews that go into great detail on sets, costumes, lighting, and how it took over two years to create the Be Our Guest dinner sequence.

“Days in the Sun” is sure to become the next timeless Disney classic and there is an Extended Song version with an introduction by Bill Condon.  Making a Moment with Celine Dion is a three minute interview that talks about how the animated film launcher her career 26 years ago and her difficult decision to return and sing again in the remake.

The musical extras wrap up with “Beauty and the Beast” Music Video by Ariana Grande and John Legend. It’s an okay video but I actually found the Making the Music Video: “Beauty and the Beast” a bit more interesting seeing all the green screen work to put the singers in the movie.  And for those who want to sing the songs without watching the movie, there is the Disney Song Selection with more than 33 minutes of Karaoke versions of all the major musical numbers.

In 1991 we were all dazzled with some of the first computer generated animation to bring us that epic Beauty and the Beast ballroom sequence. It was a breakthrough at the time but pales in comparison to what this 2017 remake has achieved. We’ve come so far in 26 years that the prospect of having Disney remake any or all of their animated library using live action seems attainable. The animated Beauty and the Beast will remain a timeless classic, and this new live action version is destined to achieve that same level of notoriety. With some exemplary acting performances, fantastic set designs, CG animated servants, and the perfect mix of song and story, this is one Disney movie destined to become part of every family’s video library.