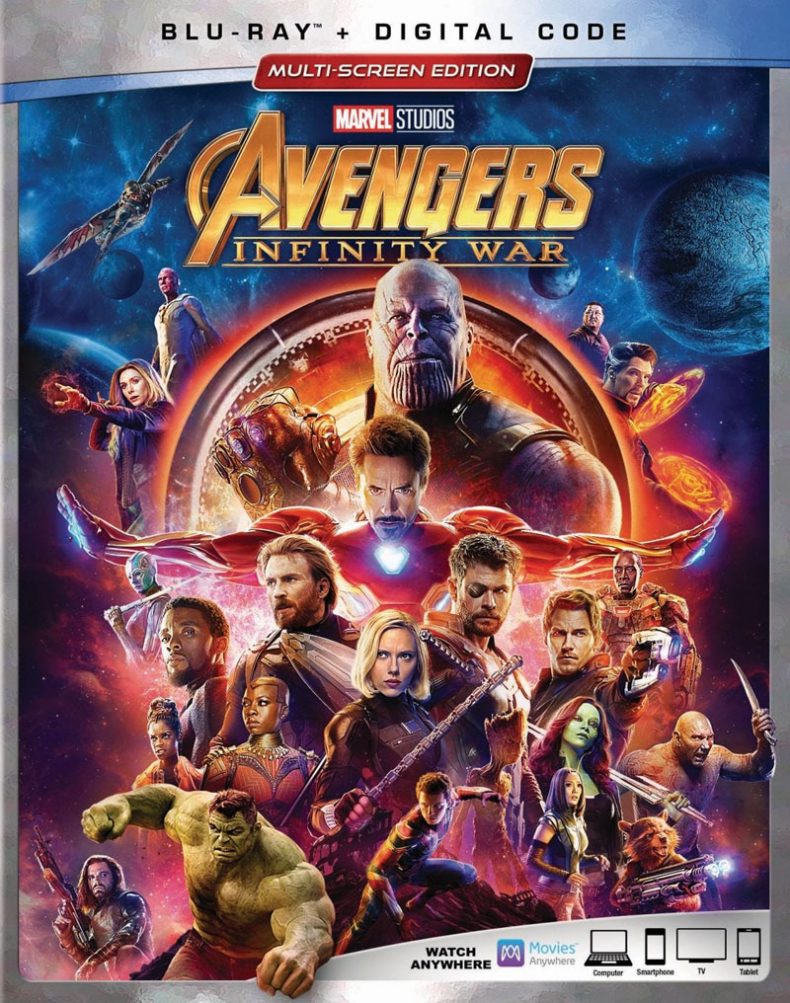 One of the best movies in the MCU is also one of Disney's best-looking Blu-rays.

I keep a list of all the Marvel movies on my phone and sort them by favorites every time a new MCU film is added to the growing library. When Avengers: Infinity War released earlier this year it easily slipped into the number one slot; how could it not? It was a rare cinematic masterpiece, ten years and 18 movies in the making, assembling more major stars than any screenwriter would dare try to put in a single film or even a story spanning two feature films; but they did it and it worked. Expectations were exceeded, minds were blown, tears were shed, and we must now all wait until 2019 to see how it all works out, but meanwhile we can relive the majesty and the tragedy of one of the best movies of 2018.

By now, we all know the story. Thanos, who has been inching his way closer to earth in numerous post-credit teasers ever since his failed invasion in the original Avengers, has finally started collecting the legendary Infinity Stones, and once he has them all he is going to dispatch half of all life in the over-populated universe with a snap of his fingers in some twisted plot to balance universal supply and demand. It’s not so crazy when he explains it, which makes Thanos one of the best “heroes” in his own mind and in this particular story. Thanos, and his personal entourage of henchmen, spend all but the final few minutes of the film searching for the Stones, two of which are on earth, while the Avengers, now teamed up with the Guardians of the Galaxy, try to stop him at every turn.

I won’t belabor the plot because, if you’re a Marvel fan like me, you’ve already seen the film a few times and are preparing to binge watch it a few dozen more in the comfort of your own home. I’m here to expand upon the technical virtues of Disney’s Blu-ray release of Avengers: Infinity War. You might be asking, “Where is the 4K review?”   Well, we only got the BD version in for review, so that’s the one we’re officially covering, but I did manage to compare this copy with the 4K version and the results were sadly disappointing for the UHD release, so you may want to save yourself $7-10 and stick with the standard BD if you’re on a budget.

The entire time I was watching Infinity War on Blu-ray I kept wondering, “How much better can this look on 4k?” and the answer is, “not much.” The standard 1080p video is, without a doubt, one of the finest images I’ve witnessed in the two years I’ve owned my Sony 940D HDTV. The Sony chipset is capable of amazing 4K up-conversion and I was seeing all sorts of details that other movies just can’t produce. Much of this has to do with the source, which was filmed at 6.5K and processed in 4K, so even when it gets compressed down to 1080p there is a lot of hidden detail waiting to be unlocked on the proper combination of player and TV. The colors were rich and vibrant without getting oversaturated. Skin tones were realistic…even the purple, blue and green skin. There were no artifacts or banding, and black levels and contrast were flawless with no crushing or loss of detail in the shadows. Conversely, the UHD edition of the film offers modest improvements in color, slightly more shadow detail thanks to HDR, and the obvious increase in resolution detail, but the UHD edition also tends to look unnatural, with shiny textures and colors that just aren’t as realistic as the Blu-ray. Given the added premium you pay for a 4K movie there just isn’t enough improvement to justify the cost.

Sadly, the Blu-ray version of Infinity War mirrors the low quality sound production of the UHD edition. This version only gives us a 7.1 DTS-HD Master Audio lossless track, which suffers from all the same sound issues Disney has been dealing with since their first Dolby Atmos release. Every Disney film to date has had a lousy Atmos track and Infinity War is one of the worst yet, forcing me to crank the volume to nearly 150% of normal listening volume to hear the dialogue then scramble to lower the volume back down for the action scenes. When listening at a normal (comfortable) level the LFE was weak and the ceiling channels appeared to be unused. The DTS-HD mix on both the UHD and BD versions of the film were equally just as weak and lifeless at normal levels as well, and I ultimately settled on turning on subtitles so I wasn’t constantly mashing the volume buttons. Sound is such a huge part of this movie experience, and epic moments like the battles in Wakanda and on Titan lost much of their gravitas due to poor sound. I put a lot of money into my THX Dolby Atmos home theater, and this film doesn’t scratch the surface of that tech.

At first glance, Avengers: Infinity War appears to have a great selection of extras kicking off with a fantastic feature commentary with Directors Joe and Anthony Russo and Writers Christopher Markus and Stephen McFeely who reveal all sorts of interesting info on writing, designing, and shooting this epic adventure. There are also several bonus features strung together in the Play All section of the extras or you can view them individually.   A brief Intro preps you for Strange Alchemy that talks about how they were able to mash multiple movies into a single story while The Mad Titan provides cool insight into the film’s villain and how Josh Brolin was able to performance capture the role with a stunning degree of detail. Beyond the Battle: Titan and Beyond the Battle: Wakanda goes behind the scenes of the two big battle sequences, one shot on set and one shot on location in Georgia. Ten minutes of Deleted Scenes along with an arguably lame Gag Reel of actors cracking up on set round out a merely average bonus package. There is also a Movies Anywhere digital code.

Avengers: Infinity War remains one of my all-time favorite movies and will likely hold the #1 slot in the MCU library for a long time to come. The UHD home release is disappointing at best, but the Blu-ray version really steps up and shines as one of Disney’s ultimate home releases; at least when it comes to visual purity. Sadly, neither the DTS-HD nor the Dolby Atmos (UHD only) sound options are a worthy match for the graphics; a disturbing trend for Disney for almost a year now. 4K aficionados will likely purchase the UHD anyway, but anyone on the fence or on a budget can rest easy that the Blu-Ray edition of Infinity War looks just as good and offers the same level of thrills, joy, and tragic sadness.   Tissues not included.