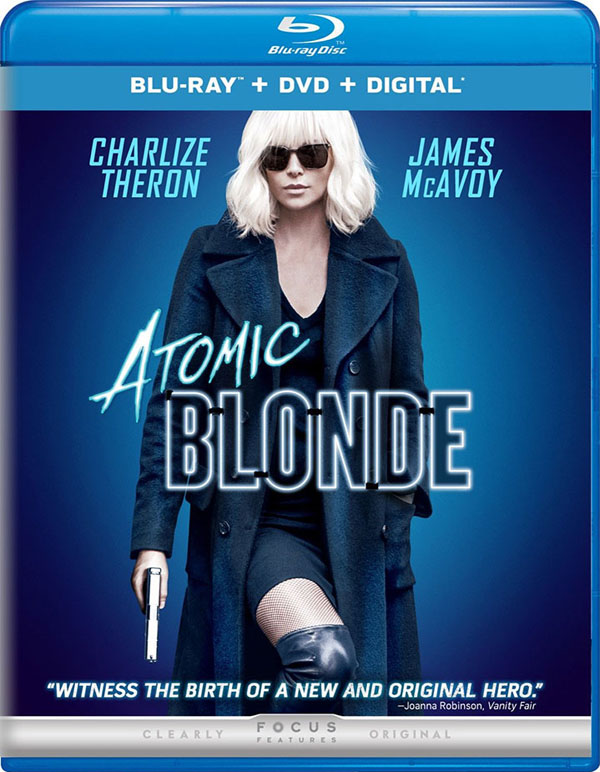 All the violence of a John Wick movie with the added sex appeal of Theron.

Atomic Blonde is the latest vehicle to propel Charlize Theron into what will hopefully become the next franchise to follow in the legendary footstep of Bond, Bourne, and Wick. A classic period piece set in the late 80’s, this entertaining spy thriller ticks off all the boxes of your favorite Cold War thriller while simultaneously infusing it with just enough gun-fu and raw close-quarters combat to keep the film relevant. And while most films strive for that profitable PG13 rating, Atomic Blonde doubles down on a hard R with a dozen F-bombs per scripted page, non-stop violence, nudity, and a somewhat graphic lesbian love scene, and somehow does it without seeming gratuitous.

The movie opens with the legendary quote from Ronald Reagan – “tear down that wall”, and we get to witness all the events leading up to that historic moment. As is the case with so many spy movies, Atomic Blonde deals with “a list” of all the secret agents and their real identities, and every spy agency on the planet wants to get their hands on it. The film is presented in a non-linear style – not as bad as Pulp Fiction – but the story bounces from present time to ten days past, and most of the film is being shown as flashbacks, as MI6 agent, Lorraine Broughton (Charlize Theron) is being debriefed by her handlers.

Broughton is tasked with going into Berlin to retrieve the list, but her cover is blown the moment she steps off the plane, leading to one of several exciting car crash moments, whereupon she is promptly rescued by her contact, David Percival (James McAvoy). David has been stationed in Berlin for a long time and has the city wired, trading black-market booze and jeans for information. His apartment looks like a warehouse for contraband. He works with Broughton to locate the list, but seems to have his own agenda.

Atomic Blonde rarely stumbles in its fast pacing, quickly moving from exposition to action with effortless and skillful set pieces, tonal shifts in color, and more needle drops than a German underground rave. The song selection for this movie is beyond words and can only be summed up as “80’s perfection”. I was a club DJ during this time, and these were the songs I was playing. The music summed up the era perfectly. If anything, Atomic Blonde suffers perhaps from too much style, at least when style seemed to favor substance. The film basks in its graphic novel roots with graffiti-style title cards and moody transitions from monochromatic scenes that border on black and white to these blown-out white exterior shots or super-saturated color sets like the cool blue apartment for Broughton or the brilliantly lit red and blue nightclub scene.

The action is intense with lots of practical photography for car chases and expertly crafted fight sequences choreographed by the fine folks who brought us John Wick. Charlize is at the top of her physical game, pulling off these huge single-shot takes that would prove daunting for a seasoned stunt person. The lighting and makeup is topnotch, and I am constantly impressed how Charlize can be one of the most beautiful women on the planet and makeup can turn her into something entirely not.

Sadly, I did not get to review the 4K version of Atomic Blonde because if a movie ever screamed for 4K this would be it. The movie is either black and white and very dark, or crazy bright and colorful – both of which would have benefited greatly from HDR. Even so, the standard 1080p presentation upconverted to nicely on my Sony 4K screen. I’m sure some details were getting crushed in the darker scenes, but Atomic Blonde is so determined to go from one visual extreme to the other that the subtleties of 4K would likely be lost to the casual viewer; especially since the 4K is using a 2K digital intermediate. There are still plenty of jaw-dropping moments where the quality of the 1080p image is near reference quality – namely the colorful lit club scene with extreme facial close-ups and the underwater escape from the sinking car.

Whether you get the 4K or the standard Blu-ray version, the DTS: X Master Audio mix is the best you’ll get from either and it is more than capable of delivering an immersive and spatial 3D audio mix of perfectly balanced dialogue and sound effects with heavy bias on the music. There were more than a few moments in the film where awesome 80’s music would overcome the spoken script, and on two occasions I opted to turn on subtitles to simply read what they were saying. While my Atmos ceiling speakers got some time off during this film, the rest of the side and rear channels got a decent workout as did my subwoofer with some aggressive LFE during action sequences and thumping 80’s club music.

Atomic Blonde delivers a nice selection of quality bonus material starting with a feature Audio Commentary by Director David Leitch and Editor, Elísabet Ronaldsdóttir, who provide some insightful narration and fun banter covering nearly every element of making the movie while expanding on certain scenes as they happen.   There are seven minutes of Deleted/Extended Scenes; none of which really added to the film – probably why they were cut, and the Welcome to Berlin feature talks about this famed Cold War city and how Budapest was used in its place. Blondes Have More Gun goes into greater detail on Charlize, why she took the role and how she trained for it.   Spymaster discusses how David Leitch was the perfect choice to direct this film, and what he brought over from the John Wick experience. Anatomy of a Fight Scene is a fantastic piece that covers the epic stairwell battle from multiple camera angles, discussing choreography, lighting, and stunts.   Story in Motion are two short storyboard sequences that show just how much the actual film stuck to the early pre-vis layouts. This package also comes with a DVD copy as well as a digital copy that looks really nice on my new iPhone 8+; even in the darker scenes.

Atomic Blonde is a fun movie loaded with action and suspense and numerous story twists you won’t see coming and will probably have to watch again to fully understand. I’m not a huge fan of non-linear storytelling, and this movie seemed more convoluted that most in knowing when and where you were in the timeline of the film. If you want all the violence of a John Wick movie with the added sex appeal of Theron and her bottomless suitcase of sexy outfits, then look no further than Atomic Blonde on Blu-ray and 4K.   You’ll definitely watch this more than once.