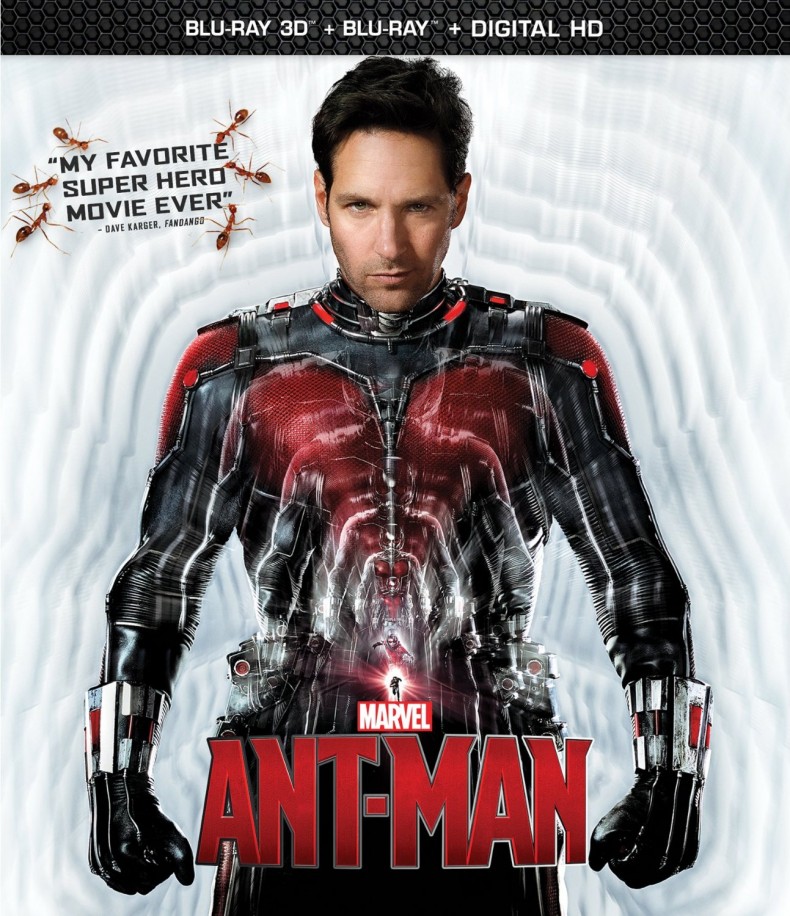 A bit of 3D ghosting in intense scenes

Marvel's smallest hero is one of their biggest successes.

With the abundance of Marvel comic book movies and TV shows dominating the current pop culture I have to wonder if, or rather when, this genre is going to self-destruct.  Iron Man 3 and Avengers: Age of Ultron arguably saw a downhill trend in storytelling despite their grossing billions, while lesser-known heroes like Guardians of the Galaxy, Agent Carter, and Jessica Jones provide a beacon of hope that there may be some life left in the Marvel Universe.   But there is no beacon currently shining brighter than Marvel’s newly released Ant-Man, out today on 3D Blu-ray…and all the other formats.

I fell in love with Ant-Man the first time I saw it in IMAX 3D and began counting the days until I could watch it at home – mostly because my 4K home theater offers a better experience than the actual theater.  What I enjoyed most about the entire concept of this film is that it is not so much a superhero movie as it is a heist movie; two heist movies if you want to break it down.   Scott Lang (Paul Rudd) is the unlikely hero of the film; a man with no inherent powers other than coming into possession of a special suit that can shrink him down to the size of…wait for it…an ANT. 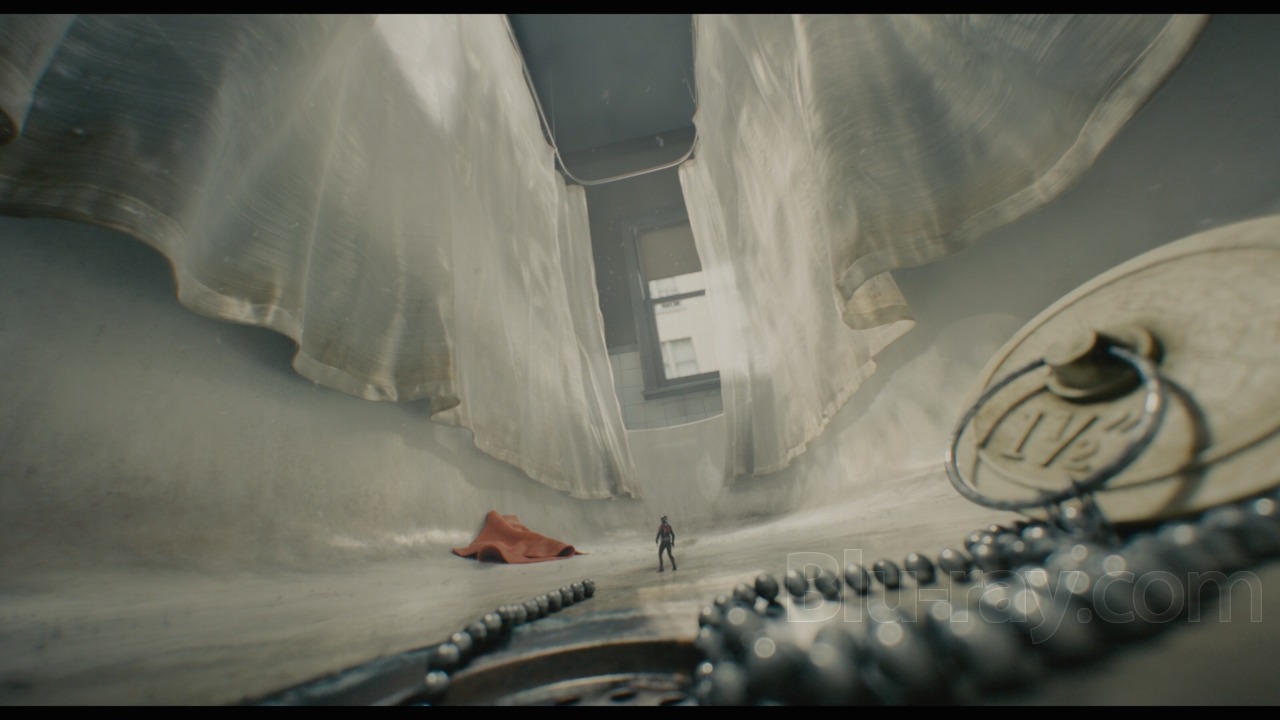 We first meet Scott on his last day in prison, serving time for hacking a company computer and returning stolen money to innocent people.  Once back in the real world our modern-day Robin Hood finds his criminal past makes it difficult to hold down even the most menial job – Baskin Robins always finds out.  Scott desperately wants to get his life in order to maintain visitation with his daughter who lives with his ex-wife and her fiancé, who also happens to be a cop.  Scott is ultimately tempted by his friends to burgle a house of an elderly ex-CEO who is away on vacation.  After the typical heist montage sequence Scott breaks into a safe only to discover a strange motorcycle riding suit and helmet…or so he thinks.

The whole thing was actually a test orchestrated by the homeowner, Hank Pym, who also happens to be an inventor of a special formula that can shrink the space between atoms, and when used in conjunction with a certain suit, shrink a human to the size of an ant, which Scott learns all too soon when he tries on the outfit in one of the film’s most exciting cinematic moments – especially in 3D.   Hank eventually recruits Scott to help him break into his old company where his successor has unlocked his shrinking formula and is working on his own Yellowjacket suit that he plans to sell to the highest bidder. 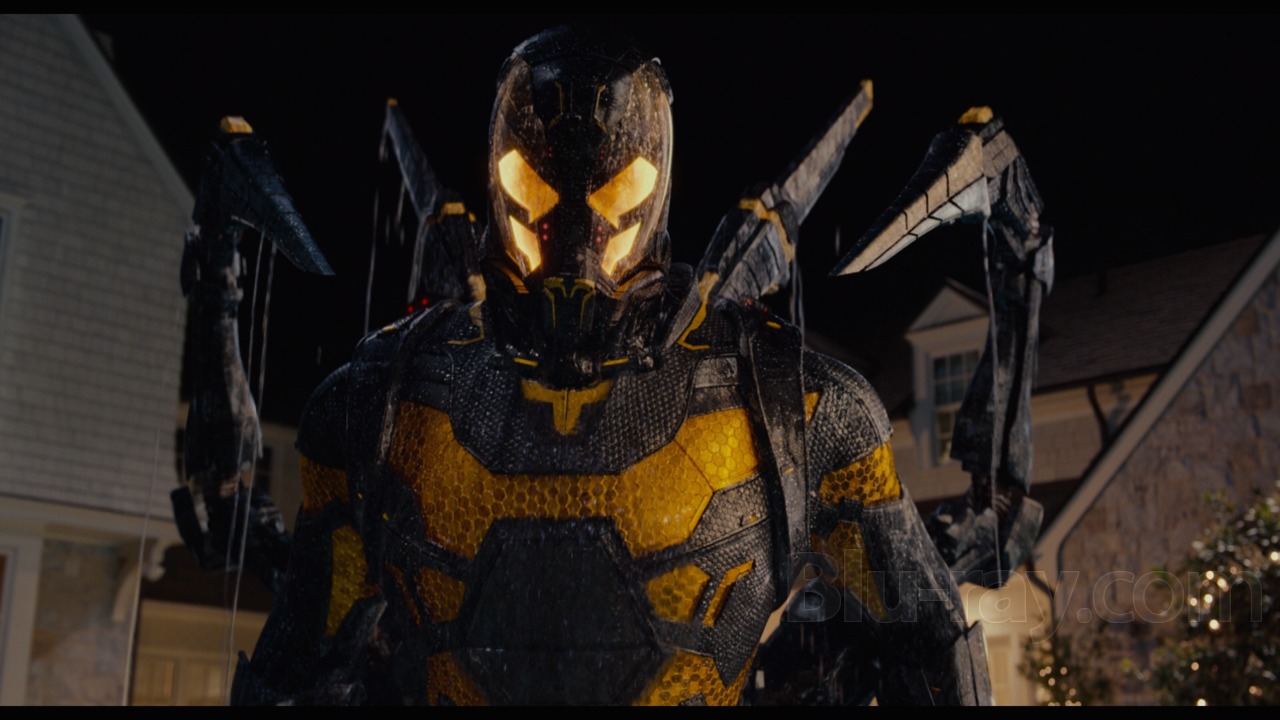 Ant-Man works on several levels, blending in the traditional superhero in a suit vibe of Iron Man with all the suspense of your favorite heist movie combined with just the right amount of humor delivered in finely crafted doses by Rudd who shines brightly amongst a fantastic ensemble cast.  There is even a humorous cameo by Falcon (Anthony Mackie), when Ant-Man has to infiltrate the Avengers’ new HQ.

Ant-Man looks stunning on Blu-ray, especially when upconverting to 4K in both 2D and 3D.  There were moments in the 3D presentation where you actually feel you are in the movie – the bathtub scene comes to immediate mind as does a POV flying sequence near the end, but there are also moments of intense action near the end of the film where the 3D makes it hard to focus and even exhibits a bit of ghosting.  Bottom-line; the 3D works best in static or less intense scenes.  The rest of the presentation is flawless with amazing textures, vibrant colors, and rich detail, all with perfect contrast and no visible glitches or artifacts.

To complement the outstanding video presentation is an immersive DTS-HD MA 7.1 audio mix that puts you smack in the middle of the film with expert use of all available channels in your home theater setup.  Rear and side channels are exploited as is some powerful LFE that had my sub and whole room trembling during the action sequences.  As expected, the mix is flawless, so music and sound never intrude on the dialogue. 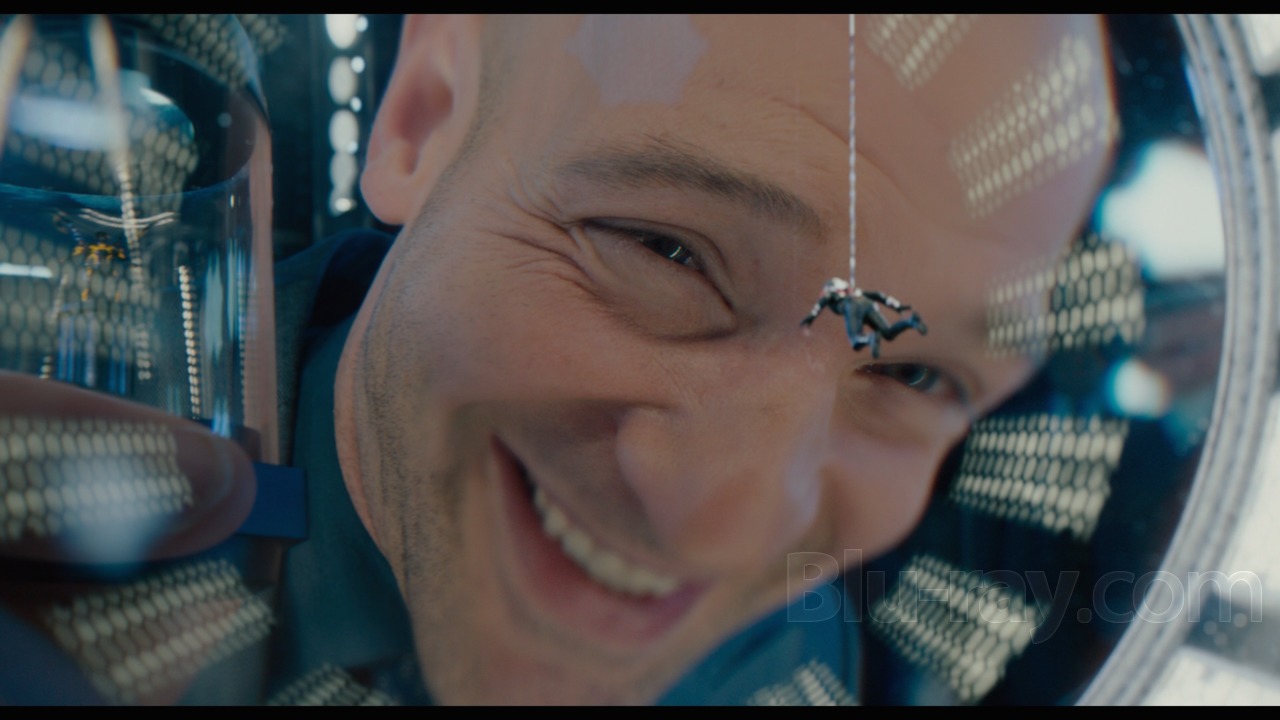 While not bursting at the seams, there are a fair amount of extras in the Ant-Man 3D Blu-ray bundle including both 2D and 3D versions of the movie as well as a digital copy for your favorite mobile device.  Up first is a feature Audio Commentary with Paul Rudd and director, Peyton Reed who go into great detail on the making of the film while keeping the conversation fun as well as educational.  In all, this is one of my favorite commentaries in 2015.  Next is the Featurette: Making of an Ant-Sized Heist: A How-To Guide that covers the more technical aspects of making the film as well as some interesting history of the character and how Ant-Man fits into the Marvel cinematic universe.  The Featurette: Let’s Go to the Macroverse covers even more technical background on the CGI used in the film while the Featurette: WHIH NewsFront is merely a collection of news reel clips taken from the film.  There are 8 Deleted and Extended Scenes complete with commentary by Rudd and Reed and an amusing Gag Reel.

I’m not sure what kind of following Ant-Man had in the comic book world before this film, but I think our tiny superhero is about to get a whole lot bigger…at least in popularity.   I admit, I was pretty dismissive of the whole film right up to the point where I actually watched it, and now it resides firmly as one of my top three Marvel movies to date alongside the original Iron Man and Winter Soldier.  Easily enjoyed as an action superhero movie or as a suspenseful heist film, or both, Rudd is a charismatic leading man who was the perfect choice to play Scott Lang, and I can’t wait to see him in the sequel.  Disney’s stunning Blu-ray presentation delivers outstanding visuals and audio and a nice collection of extras that make this a must-own title and perfect gift for the holidays. 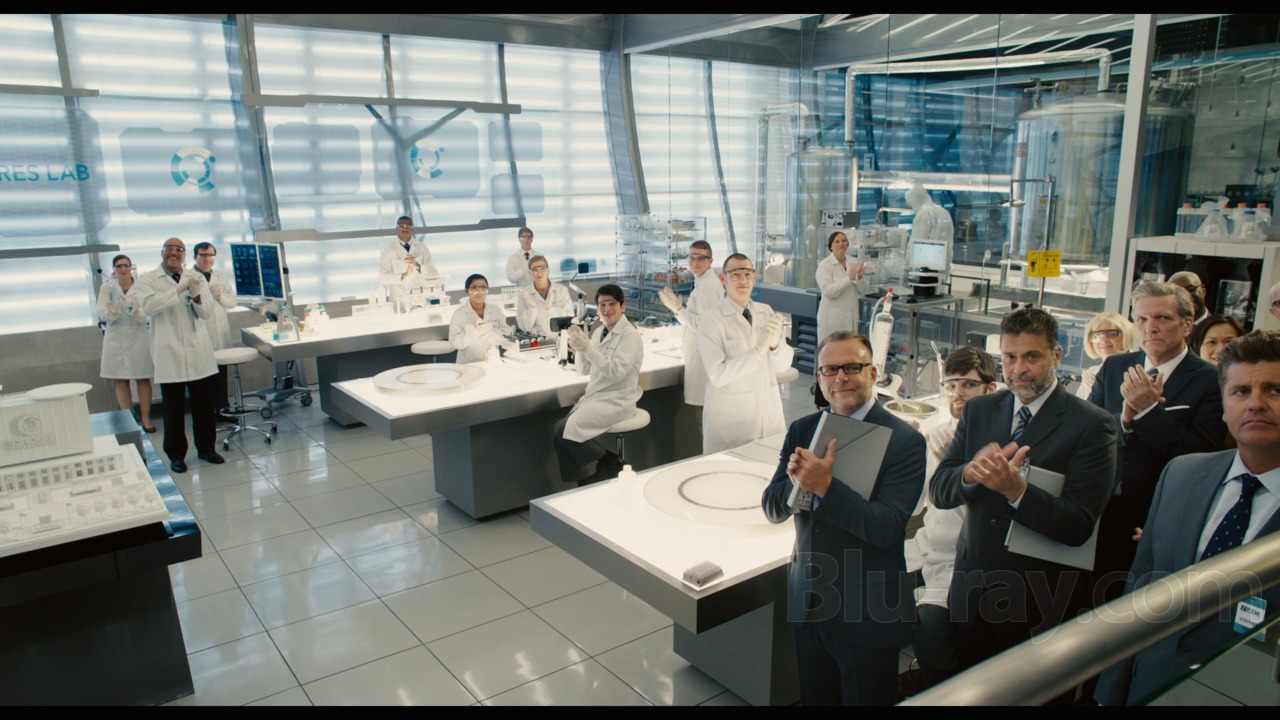 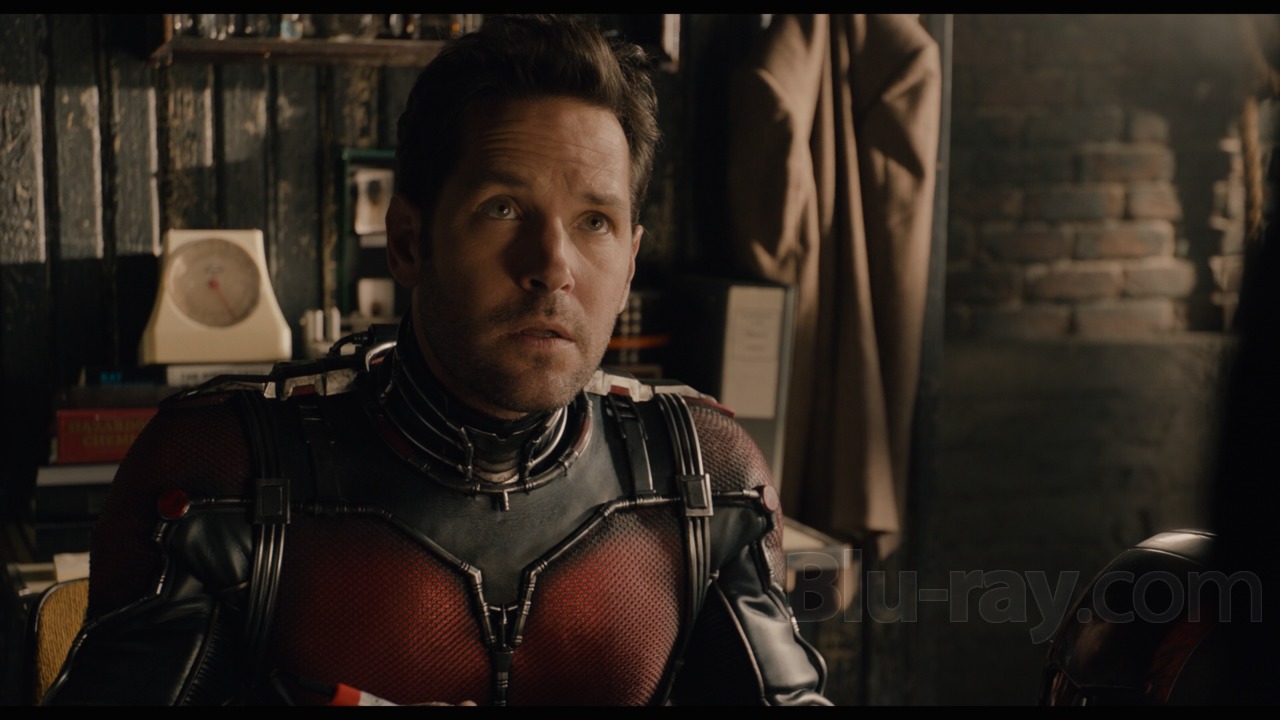 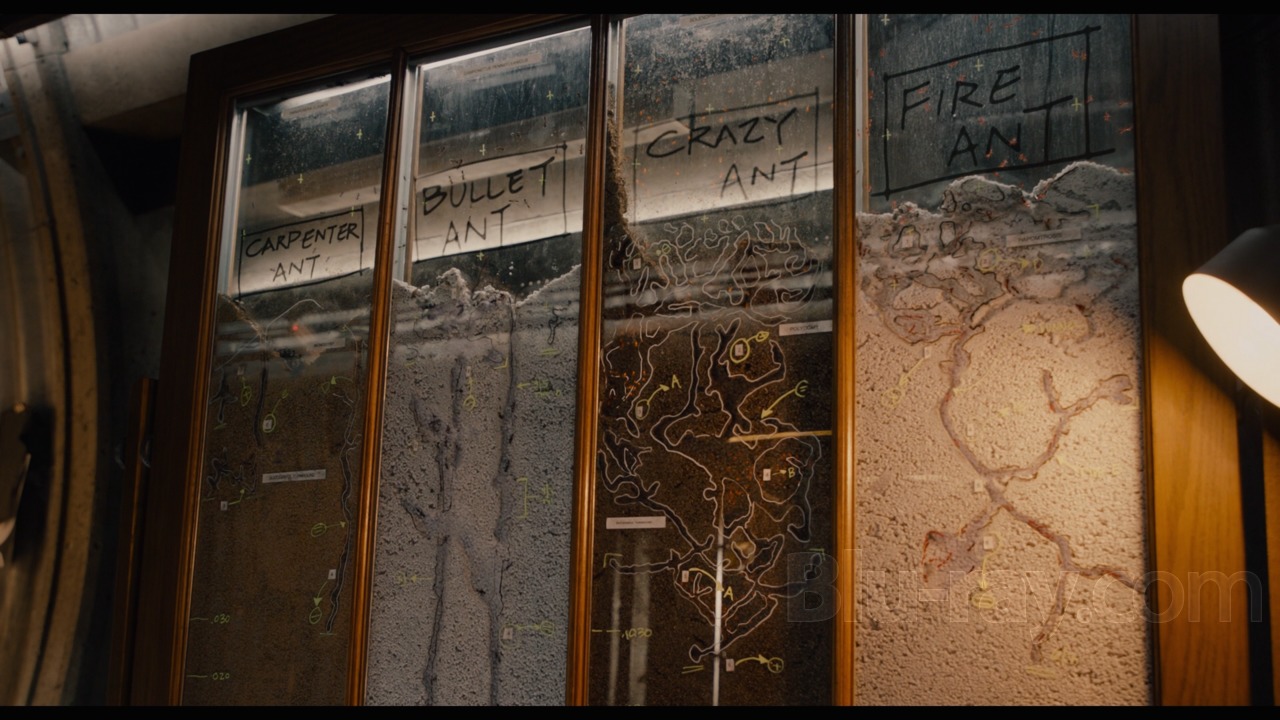 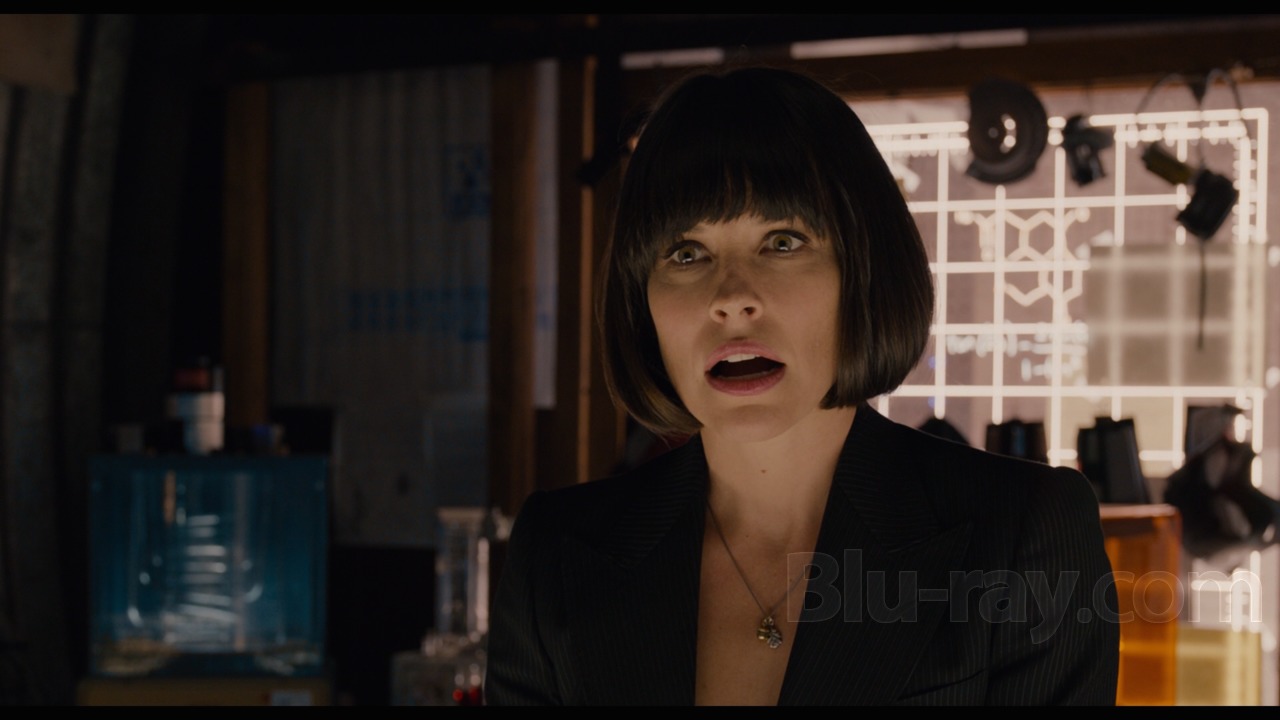 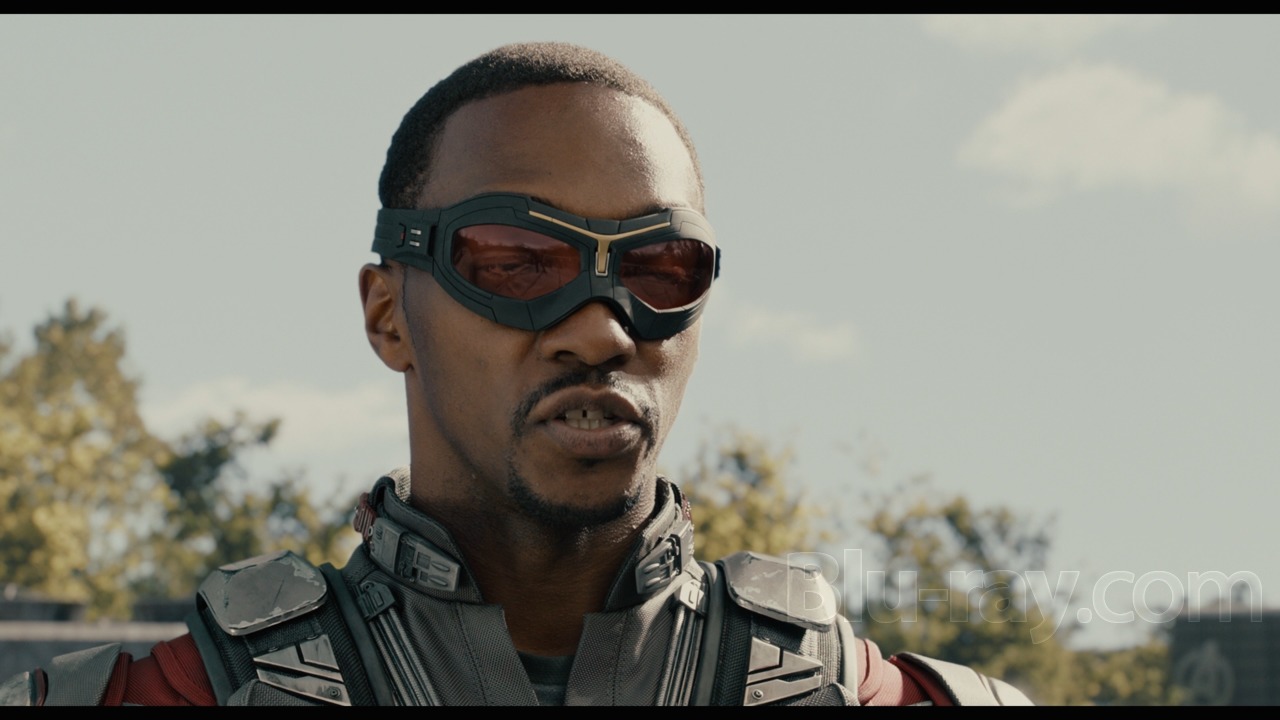 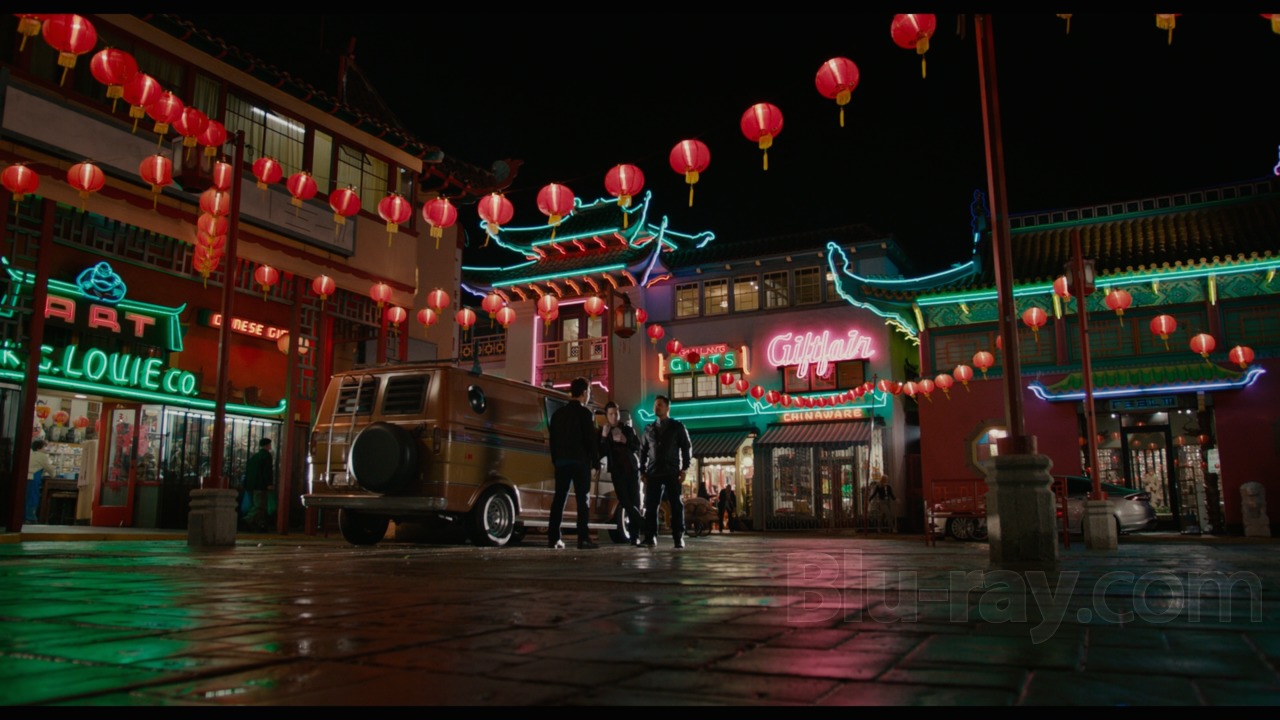 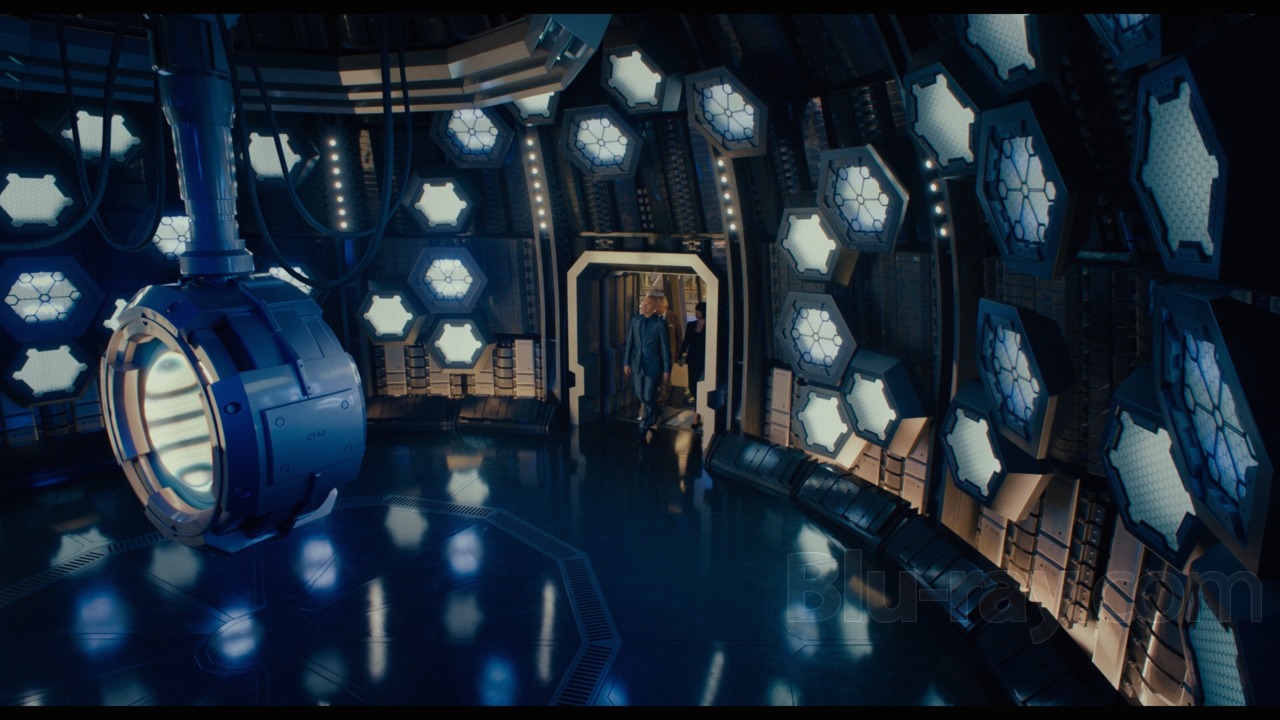 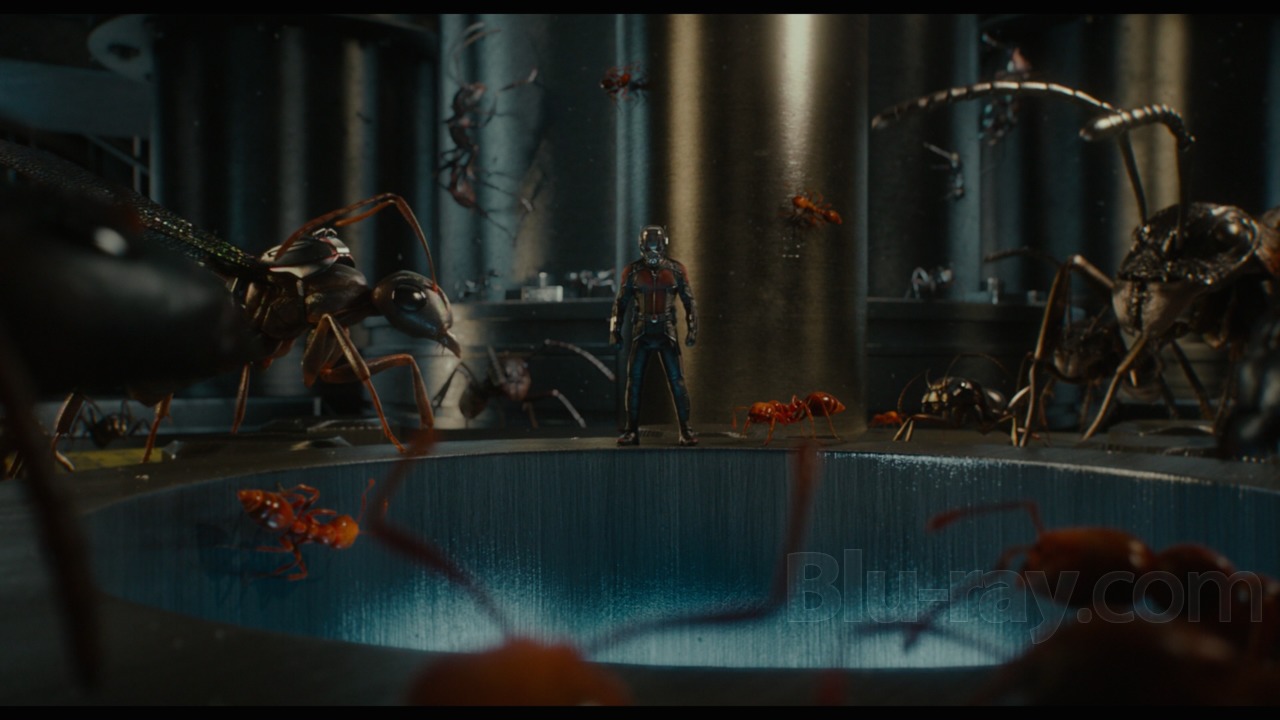 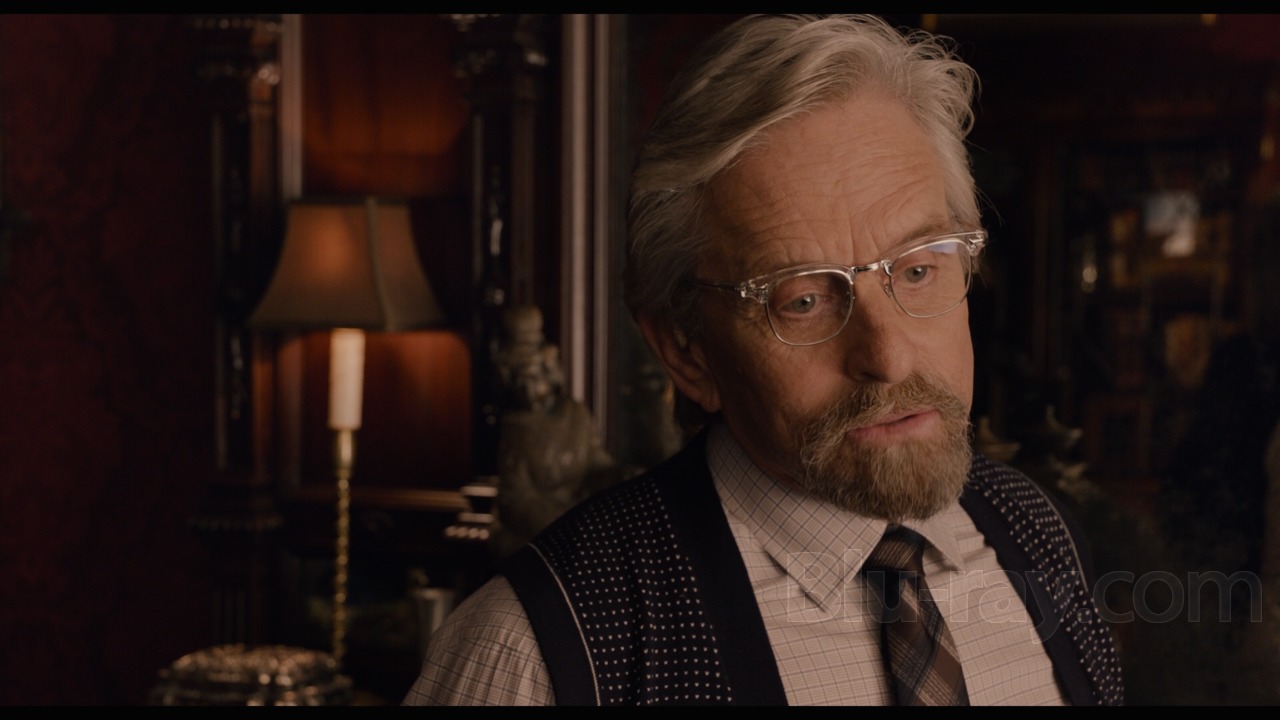