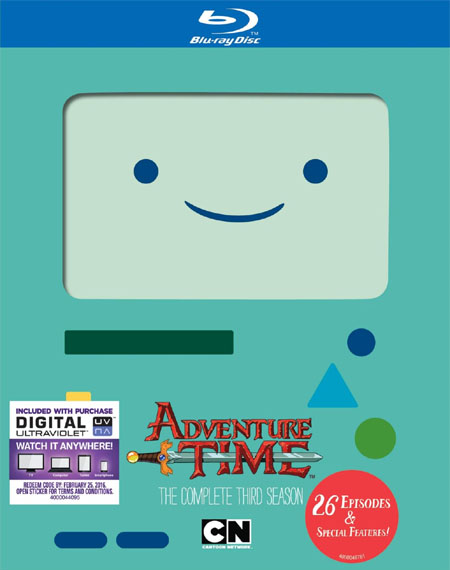 Funny for parents and kids, Commentary on every episode

Overly silly at times, Some of the voices are grating

A silly yet clever show suitable for the entire family.

I’ve always had a love for cartoons though I feel that the quality has dropped significantly over the years. Maybe cartoons these days just don’t have the same substance that they did during my childhood or perhaps my tastes have changed as I’ve grown older. One show bridges the ridiculousness of modern cartoons with something deeper and more serious underneath the surface, and that show is Adventure Time which is now in its Fifth season. I’m here however to cover the recent release of the Adventure Time: The Complete Third Season Blu-Ray.

To be quite honest, I had only seen one episode of this show prior to reviewing this Blu-Ray and even then I never fully understood what has made this show such a runaway success. As it would happen that much talked about episode “Fionna and Cake” is actually part of this Blu-Ray collection. While that episode is pretty cool it’s best to try to explain the basis of Pendleton Ward’s phenomenal creation before going into that specific episode. The series follows Finn the Human and Jake the Dog, a pair of heroes who live in a treehouse and seem to find themselves mixed up into the weirdest situations in the Land of Ooo. There always seems to be someone in need of help in this strange and colorful world inhabited by candy people, princesses, a vampire queen, and a Korean speaking Rainicorn. 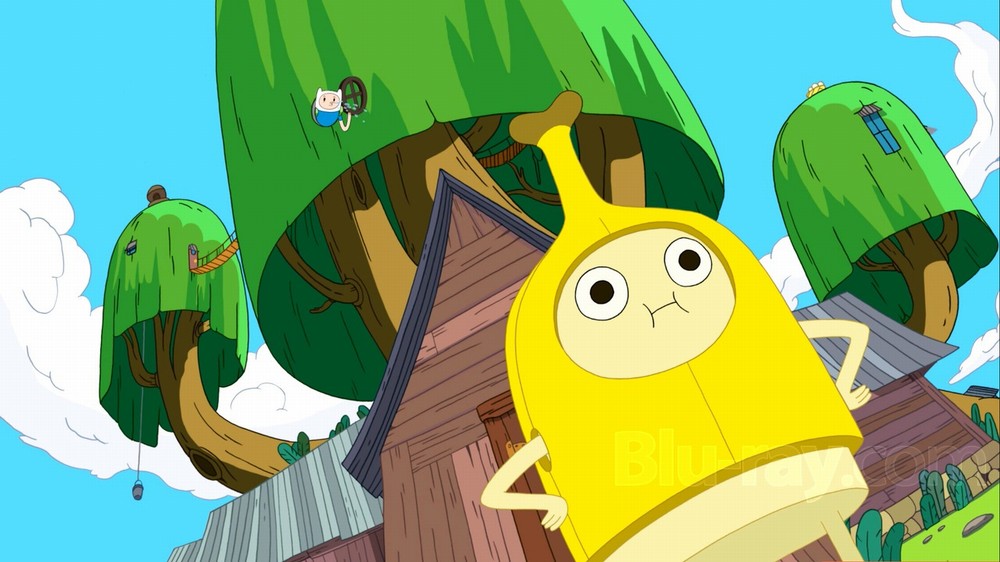 It’s true that Adventure Time is an odd show that is bright and colorful though it’s got  a rather dark underbelly as it takes place in a post-apocalyptic world set 1000 years after something known as the Great Mushroom War. The main character, Finn appears to be the only human in the show raised by Jake the magical Dog’s parents which leaves all kinds of questions for older audiences and adds to my personal allure of the show. This isn’t the only mystery that the show holds though, and it’s Finn and Jake’s adventurous acts to stop the Ice King’s princess kidnapping antics that will assuredly hit home with the younger crowds.

There are 26 adventure-filled episodes contained on one Blu-Ray disc and all them are pretty cool in their own way. While I’d like to mention them all, I have my personal favorites starting with the highly talked about “Fionna and Cake” episode. Even as you start to watch this episode you’ll notice that it’s not quite like all the rest. This one features a complete gender swapping of the entire cast and features an almost romantic adventure with Fionna unsure if Prince Gumball wants to hang out or go on a date with her after she saves him from the Ice Queen. Of course like any episode of the show there is the obligatory twist.

The season is full of colorful episodes but it’s some of the darker ones that I found more appealing like “The Creeps” which takes place in a cliffside castle. Finn, Jake, Princess Bubblegum, Beemo, CinnamonBun and Lumpy Space a Princess are all mysterious invited to a party at the castle and soon find out that a ghost is out to kill everyone in the house. I love this episode as it reminds me of classic horror films like The House on Haunted Hill with a touch of the movie Clue. There’s also the episode “No One Can Hear You” which everyone disappears in the Candy Kingdom except for Jake after Finn is knocked out by an attacking deer. 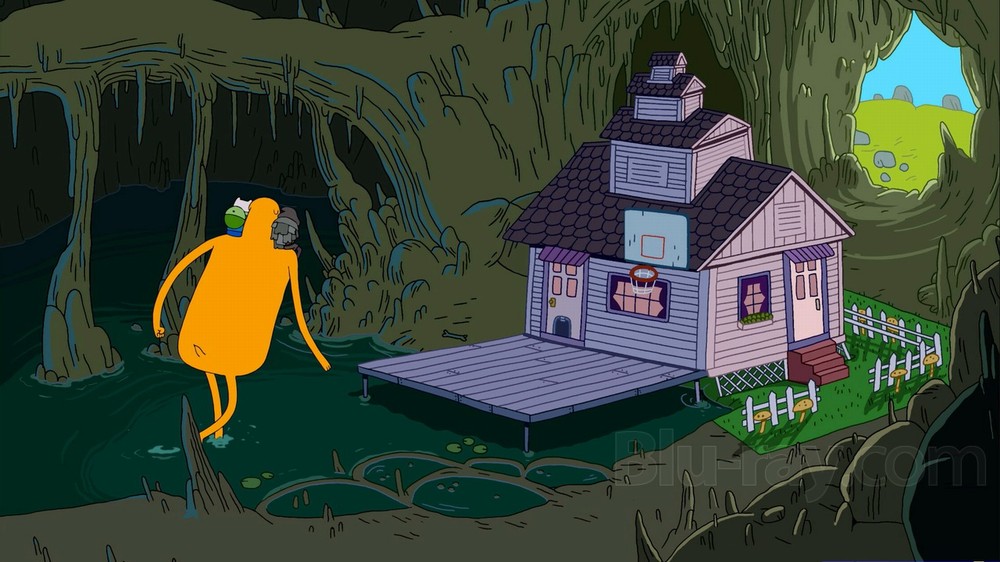 Adventure Time: The Complete Third Season Blu-Ray is presented in 1080p High Definition and looks pretty good from its seemingly hand-drawn simple character designs to its more complex set pieces. Adventure Time features a wide variety of kingdoms each with their own style and it all looks sharp on Blu-Ray from the soft edges of the Cloud Kingdom to the pointed Ice mountains of the Ice Kingdom. The color palettes featured in both the cheery and darker moments look really vivid with no apparent banding in the solid patches.

One of the things that I enjoy the most about Adventure Time is the audio and voice acting. For starters the show features some rather cool music pieces that blend together perfectly and can change at the drop of a hat from haunting to cheerful. The biggest thing that drew me in was the voice cast, though a few of the characters come off as a little bit grating to me like the Earl of Lemongrab. As someone who has watched a lot of cartoons growing up it’s hard not to notice the voice talents of Jon DiMaggio (Jake) and Hynden Walch (Princess Bubblegum) who voice Bender and Starfire respectively in other popular cartoons. Show creator Pen Ward even lends his voice to a few characters including LSP. These actors also bring music to the show as you will often times find them breaking out into song like in the episode “What is Missing?” which is pretty cool. Everything including the soothing ending credit song is brought to you in a Double Digital English 2.0 track. 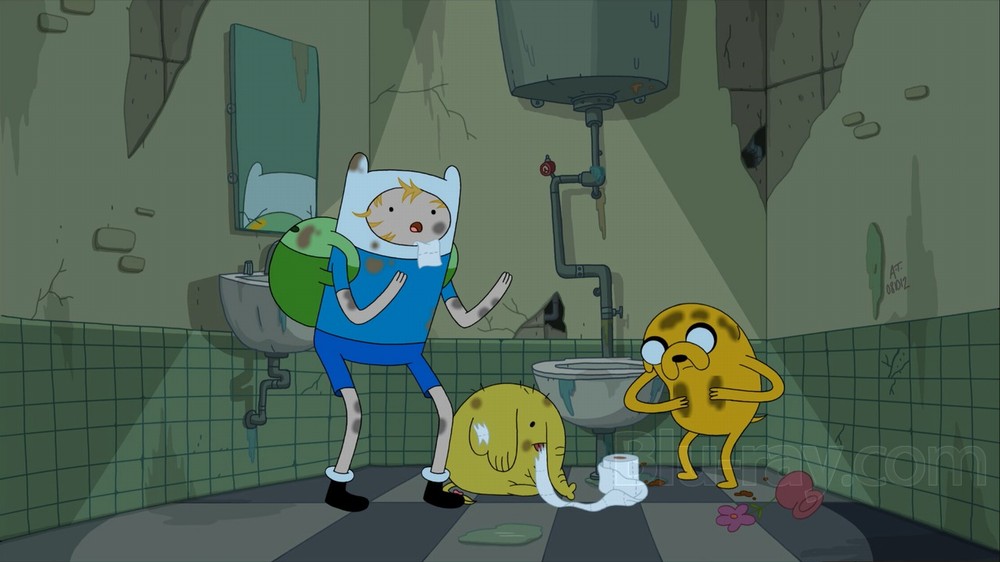 The Adventure Time: The Complete Third Season Blu-Ray comes with all 26 episodes but that’s just the beginning for fans of the show. For those that want an inside take of the show you can listen to an audio commentary track for every episode by Pen Ward and various members of the cast and crew. This Blu-Ray also included a cool Alternate Intro animation which was pretty sweet as well as a feature on how Adventure Time went from an idea to a phenomenon. For families on the go you can also redeem the included code to watch the third season practically anywhere you want via Ultraviolet on a laptop or mobile device. The true fan can even attach the included paper legs and arms to the outside of the specially designed Beemo Blu-Ray packaging to have their own little copy of their favorite gaming device right in their own home.

After watching the Adventure Time: The Complete Third Season Blu-Ray, I’ve begun to see what makes an unusual show like this so popular. Sure it’s overly silly at times and the main characters go off and do things that make no sense at first, but that’s part of its charm. There are plenty of heroic adventures for the young audience with a bit of suspense and intrigue for the parents or older audiences so it’s a unique show that families can watch together. Pen Ward said that he wanted to create a show that didn’t drive his own mother crazy from the other room with over the top voices and I believe he’s done just that. Adventure Time is a funny, dark, unnerving, cheerful and just all around heroic good time for current fans and potential new ones who have yet to experience a good old fashioned adventure. If you’re a fan of the show or are looking for a new series to check out then definitely give the Adventure Time: The Complete Third Season Blu-Ray a shot and be sure to pick up Seasons 1 and 2 while you’re at it. 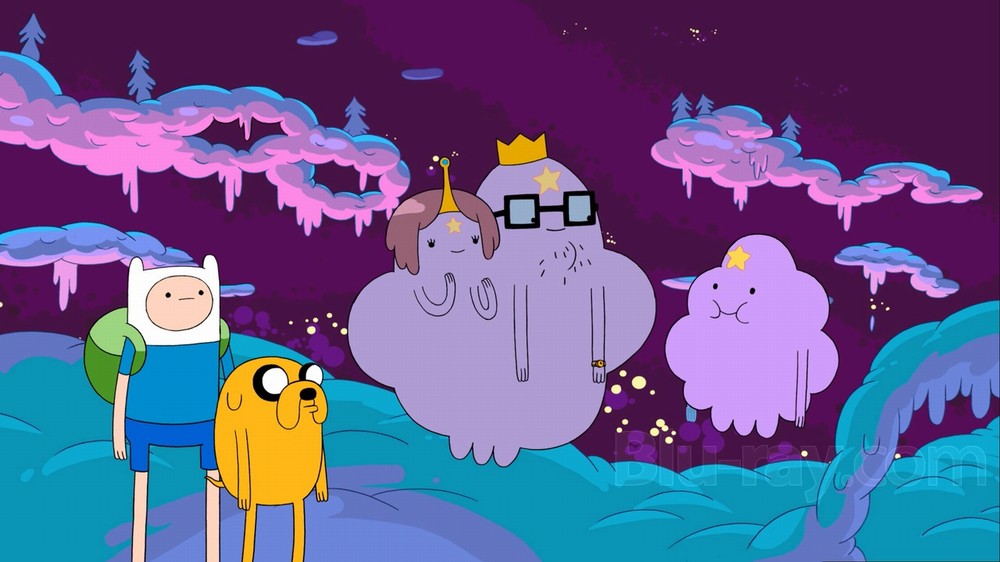 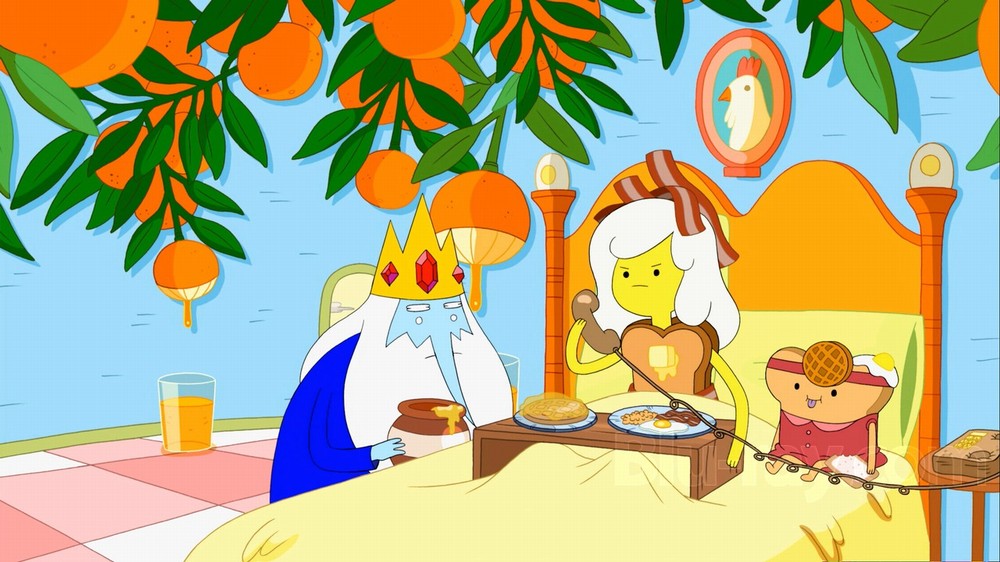 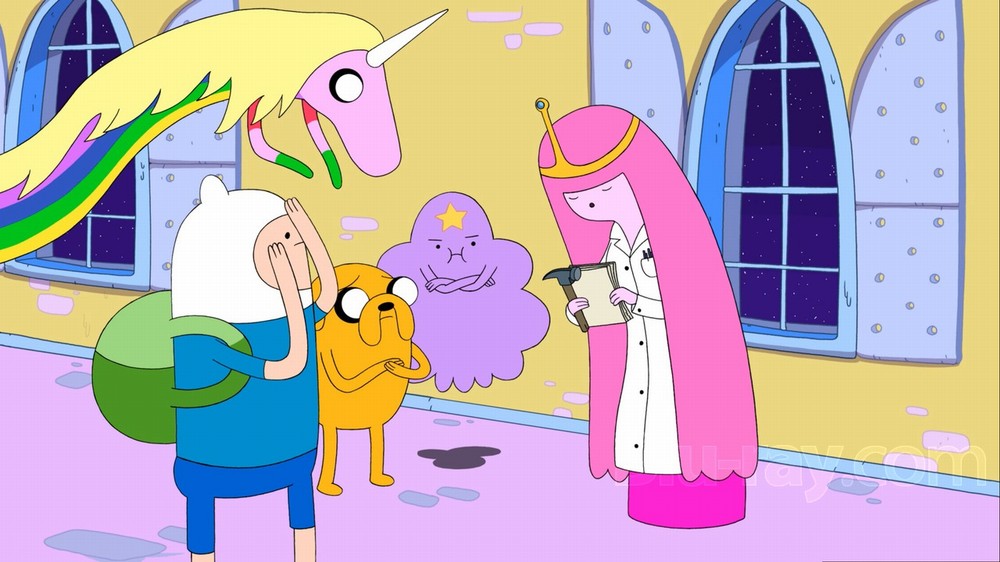 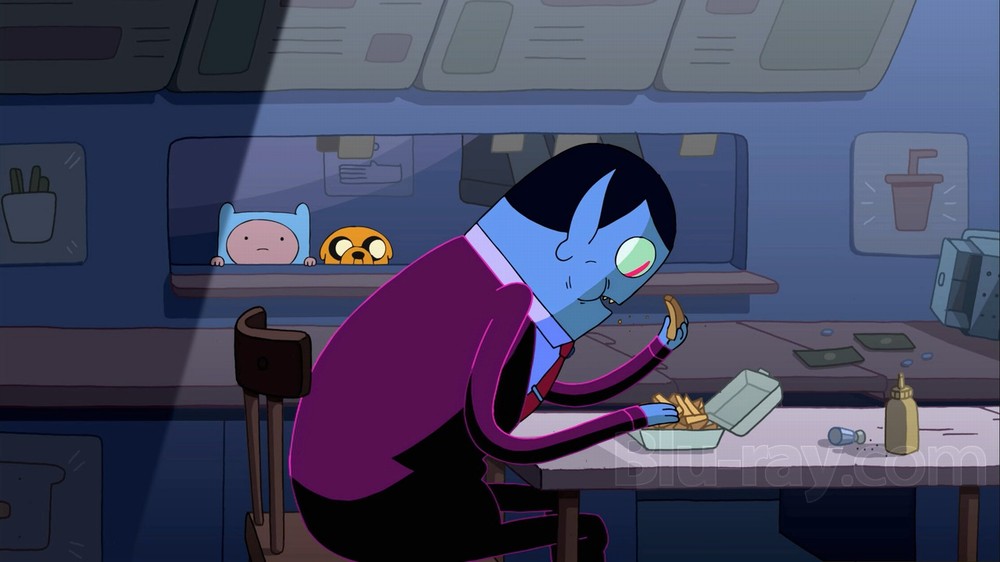 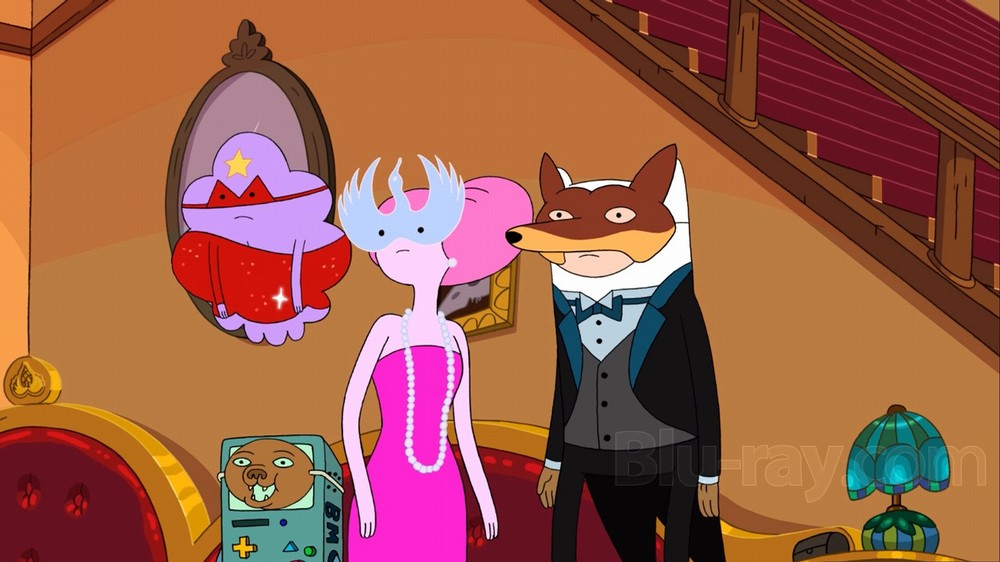 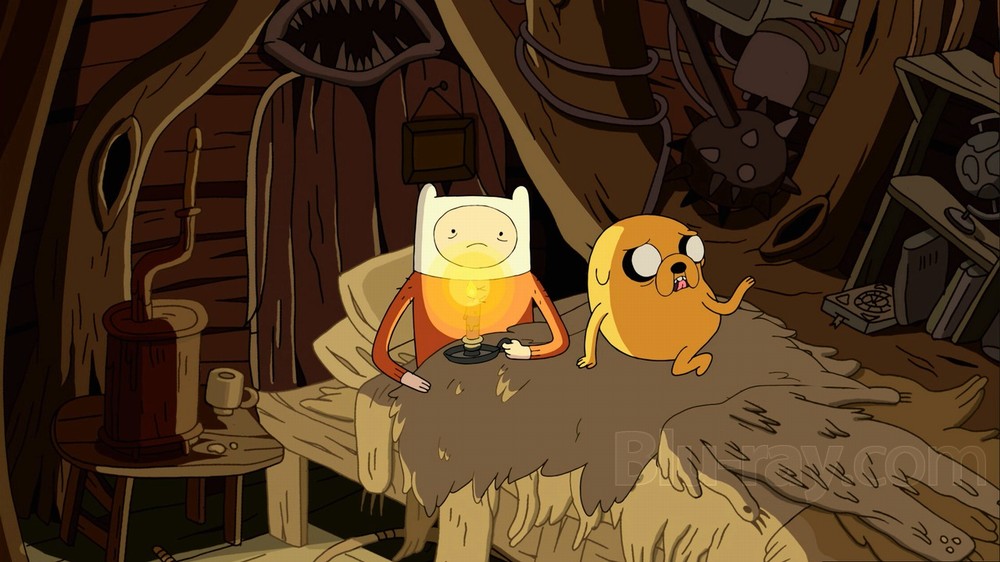 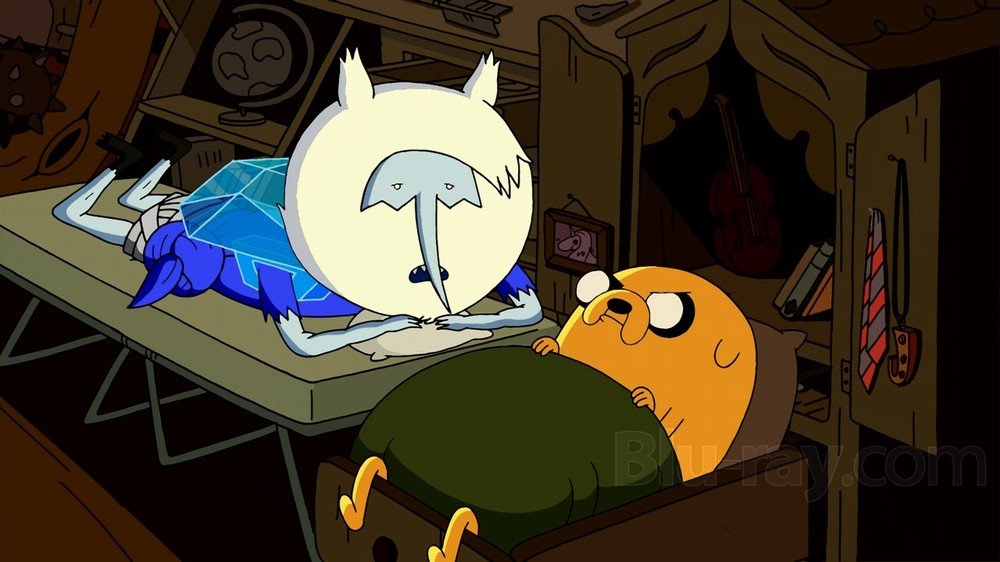 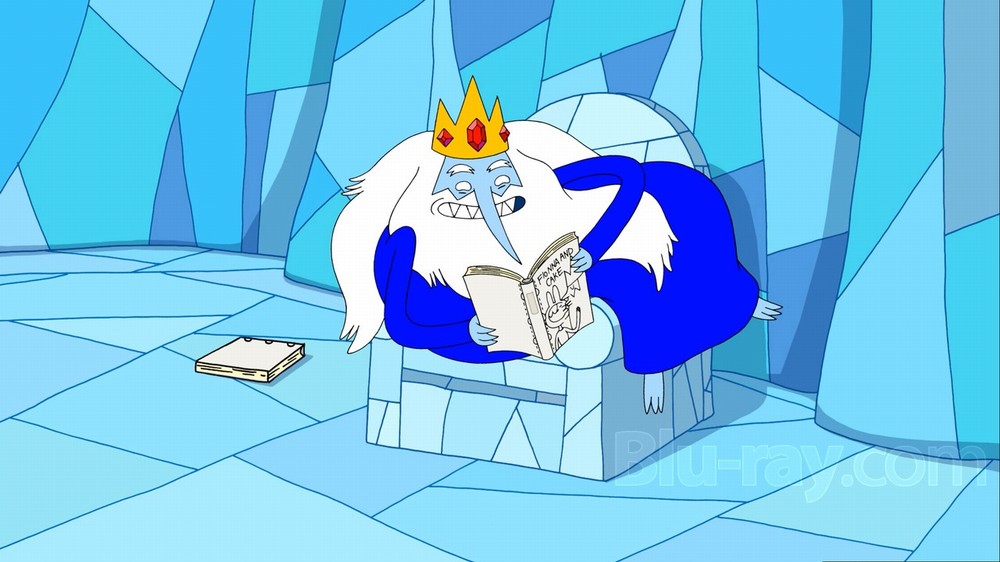 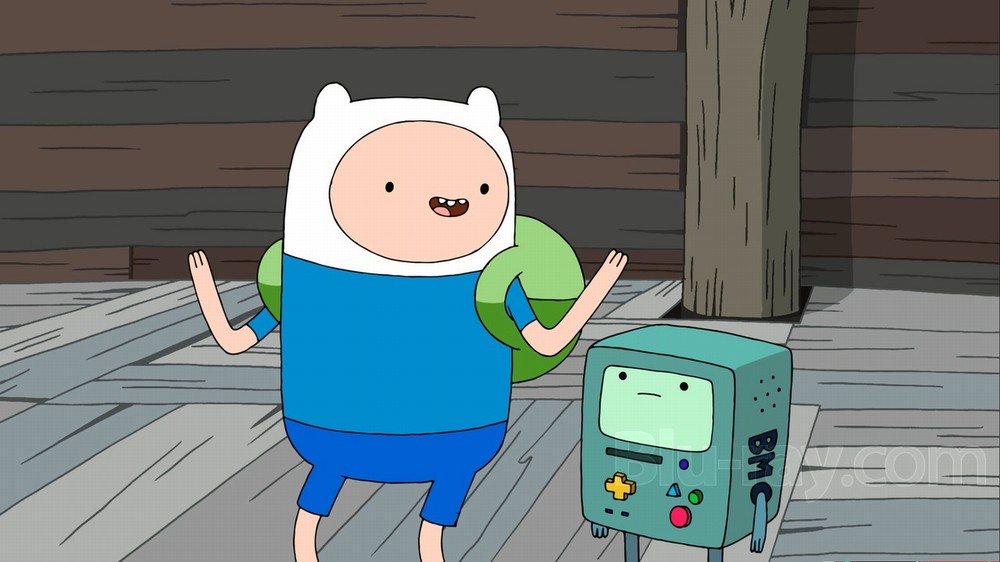