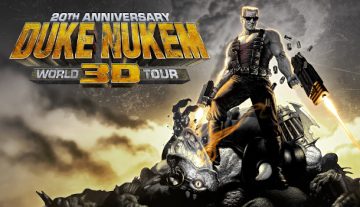 “I joined the Duke Nukem 3D development team in the mid-nineties and am proud to have been a part of the emergence of the 3D First Person video game genre that would enhance the entire video game industry,” said Randy Pitchford, founder of The Gearbox Entertainment Company. “This project has made it possible for us to reconnect with first person pioneers Allen, Richard, Lee, Jon, Ken, Bobby and others to all be able to come back together to not just be nostalgic, but to have an opportunity to enhance our original work and even bring something new, including an entirely new episode added to the classic game. Today, we are thrilled to have the entire Nintendo Switch family join us on this adventure.”

From now through July 7, fans can purchase Duke Nukem 3D: 20th Anniversary Edition World Tour on the Nintendo eShop at a 50% discount. Gearbox Publishing encouraged gamers to pre-order now to take advantage of this offer and be ready on June 23 when it releases worldwide.

Set to launch on the Nintendo Switch in the Nintendo eShop at an MSRP of $9.99, Duke Nukem 3D: 20th Anniversary Edition World Tour contains: