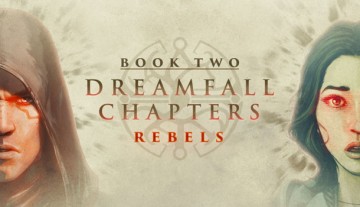 The highly rated and Kickstarter funded follow-up to adventure classics The Longest Journey and Dreamfall, Dreamfall Chapters is an episodic story-driven adventure about choice and consequence set in parallel worlds: a cyberpunk vision of the future and a magical fantasy realm.

Book Two continues the story that began with Book One, and follows protagonists Kian Alvane and Zoë Castillo on their journeys to uncover the conspiracy that threatens the twin worlds of order and chaos.

In addition to revisiting locations and characters from Book One, Book Two contains a brand new city to explore: Marcuria, the capital of the Northlands, home to the Azadi occupying forces and the resistance.

Dreamfall Chapters is the episodic follow-up to award-winning adventures The Longest Journey and Dreamfall: The Longest Journey: a story-driven adventure about choices and consequences, dreams and reality, magic and science, chaos and order, and the broken heroes whose actions will shape the course of history in all worlds.

Set in parallel worlds — one a dark cyberpunk vision of the future, the other a magical fantasy realm — the game follows two broken heroes on their journey across worlds to save the very nature of dreams from the Undreaming. Dreamfall Chapters is a mature, emotional, dark, magical and heartbreaking adventure that will take you by surprise.