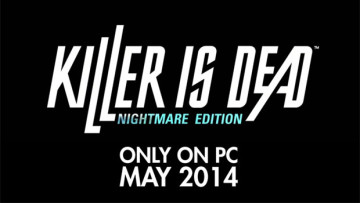 Deep Silver today announced that “KILLER IS DEAD” is making its way to PC. The “KILLER IS DEAD – Nightmare Edition” will be available for retail and digital download from May 9th, 2014 and feature exclusive extra content. The price will be $19.99.

The additional content includes a new difficulty mode called Nightmare Mode. In this mode, enemies can only be defeated using the following attacks: Adrenaline Burst, Dodge Burst, Headshots, so the gameplay requires far more skill and tactics. Players will also not be able to use the Final Judgement finisher (QTE mode) to defeat enemies.  Also included is the Smooth Operator Pack for console, unlocked after Episode 3.  Additionally there is a new Theater Mode where players can rewatch cutscenes and get extended background information on characters, helping to unravel the story after the first playthrough.

“KILLER IS DEAD” is set in a not-so-distant future similar to (but not the same as) the world we know now. The player takes control of an executioner named Mondo Zappa who wields a Japanese sword in his right hand and brandishes interchangeable weapons in his left artificial arm. His ultimate goal is to execute various heinous criminals scattered around the world and beyond.

Completely unique visuals and outstanding stylish action come together to deliver an unprecedented gaming experience in “KILLER IS DEAD.” The action title is being jointly developed by KADOKAWA GAMES and GRASSHOPPER MANUFACTURE, with SUDA51 lending his trademark sense of style at the helm. Learn more at www.loveandkill.com.