Summer is almost over, but we’d like to give you one last stab at island murder-mysteries before the sun sets on despair! Danganronpa™ 2: Goodbye Despair, the sequel to the highly popular mystery adventure game Danganronpa: Trigger Happy Havoc, is now available on the PlayStation®Vita in North America in both retail and digital form. It will also be available in Europe on September 5th. 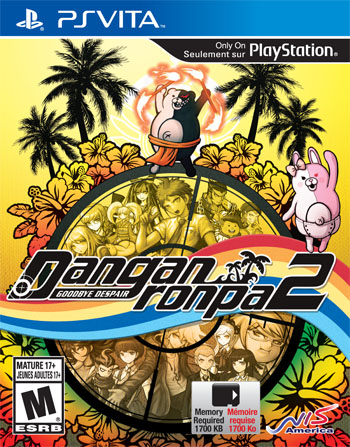 As in the first game, players will take on the role of a high school student as they are thrust into a life-or-death situation, and must use their wits and teamwork to survive. Each student was chosen for a special ability they possess, making them the “ultimate” example of something. Characters in this title are also designed by Rui Komatsuzaki for a unique and darker take on the anime style.

Jabberwock Island – once a popular tourist destination, this now uninhabited island remains oddly pristine. You and your classmates at the elite Hope’s Peak Academy have been brought to this island by your super-cute teacher for a “lovey-dovey, heart-throbbing school trip.” Everyone seems to be having fun in the sun…until Monokuma returns to restart his murderous game! Trapped on this island of mutual killing, your only hope of escape rests in solving the island’s mysteries. But be warned—sometimes the truth can be its own despair…