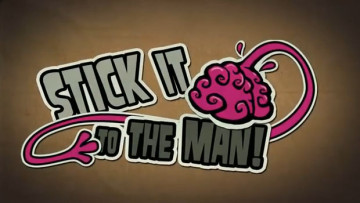 Swedish creative geniuses Zoink Games and UK indie publisher Ripstone have read the minds of the fans and found out you wanted a next-gen version of the critically acclaimed crazy mind-reading puzzle game Stick It To The Man – so they’re bringing it to you on PlayStation®4 soon!

Stick It To The Man will have you exploring a world made of paper and stickers; helping Ray who has just woken up from a bizarre accident with a giant pink spaghetti arm sticking out of his brain. This gives him extraordinary mind-reading powers, as well as being able to transform the world around him by tearing it, folding it and using the crazy stickers he finds to solve mind-boggling puzzles. Sadly, Ray doesn’t have much time to get to grips with his new psychic abilities as he’s on the run from ‘The Man’ for a crime he didn’t commit! Can you change the world with stickers and help Ray out of this sticky situation?

So if you own a PS4 and have always wanted to be able to read people’s minds and find out what they’re really thinking – you’ll soon be able to. The game has been enhanced to take advantage of next-gen features, Ray’s madcap adventures are now displayed in pin-sharp 1080p and the DualShock®4 controller speakers are used to tap into characters thoughts in the game, further separating the mindreading world from Ray’s world.

Stick It To The Man will be available to download from the PlayStation Store on PlayStation®4 from 30th April in Europe, and 6th May in the US. The game is also coming to Wii U in late Spring 2014, release date to be announced shortly.

Check out the website for more information www.stickitgame.com or head to the facebook page for sneak peeks and competitions. You can also get involved in the conversation on twitter using the hashtag #StickItGame