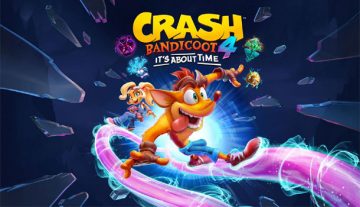 Just ahead of the official launch of Crash Bandicoot™ 4: It’s About Time on October 2, fans who digitally pre-order the brand-new Crash™ game on PlayStation® 4, PlayStation® 4 Pro and the family of Xbox One devices from Microsoft, including the Xbox One X will be among the first consumers in the world to play via a hands-on demo on Sept. 16.

Gamers all over the world have been clamoring for the chance to play the game early. Activision and Toys For Bob are proud to offer players an early look at two levels from Crash Bandicoot 4: It’s About Time, letting them play as Crash or the fiendish Neo Cortex. Additionally, fans will experience first-hand the fun of the wielding the power of some of the new Quantum Masks – Kupuna-Wa to control time and Lani-Loli to phase objects in and out of existence. Those that have pre-ordered the game digitally past and present will be able to download the demo until the game’s global launch*.

As the first original Crash Bandicoot™ title in more than a decade, Crash Bandicoot 4: It’s About Time is built from the ground up and brings with it a new onslaught of absurd challenges for players to conquer. In the game, players uncover four powerful Quantum Masks, the guardians of space and time, that must be reunited to restore order to the multiverse.

“Fans are so excited to get their hands on Crash Bandicoot 4: It’s About Time, the first original Crash Bandicoot title in more than a decade,” said Paul Yan, Co-Studio Head at Toys For Bob. “Even though we’re still a number of weeks out from the official launch, we can’t wait for fans to experience the challenge, fun and love we’ve poured into this game, so we’re really happy to offer them early access to part of the game through a special demo.”

Crash Bandicoot 4: It’s About Time will be available for the suggested retail price of $59.99 in the U.S. For more information on the Crash Bandicoot franchise, please visit www.crashbandicoot.com and follow @CrashBandicoot on Instagram, Twitter and Facebook.